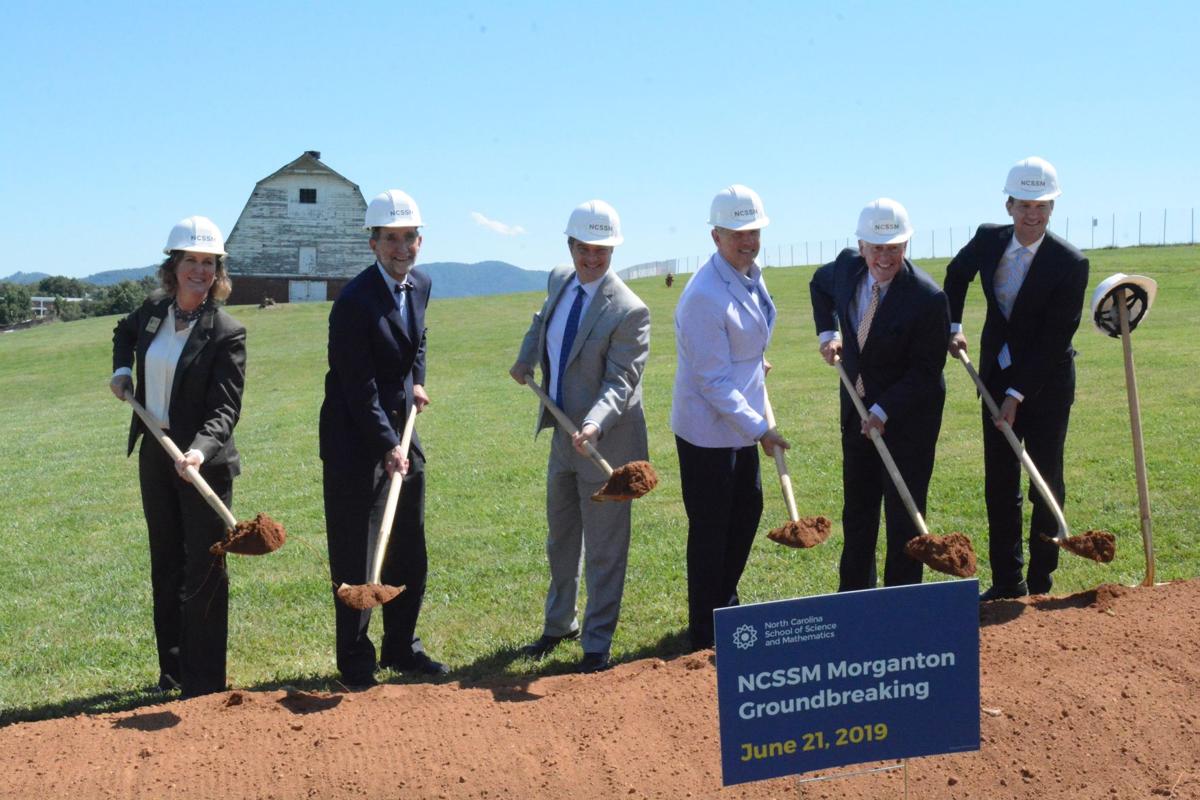 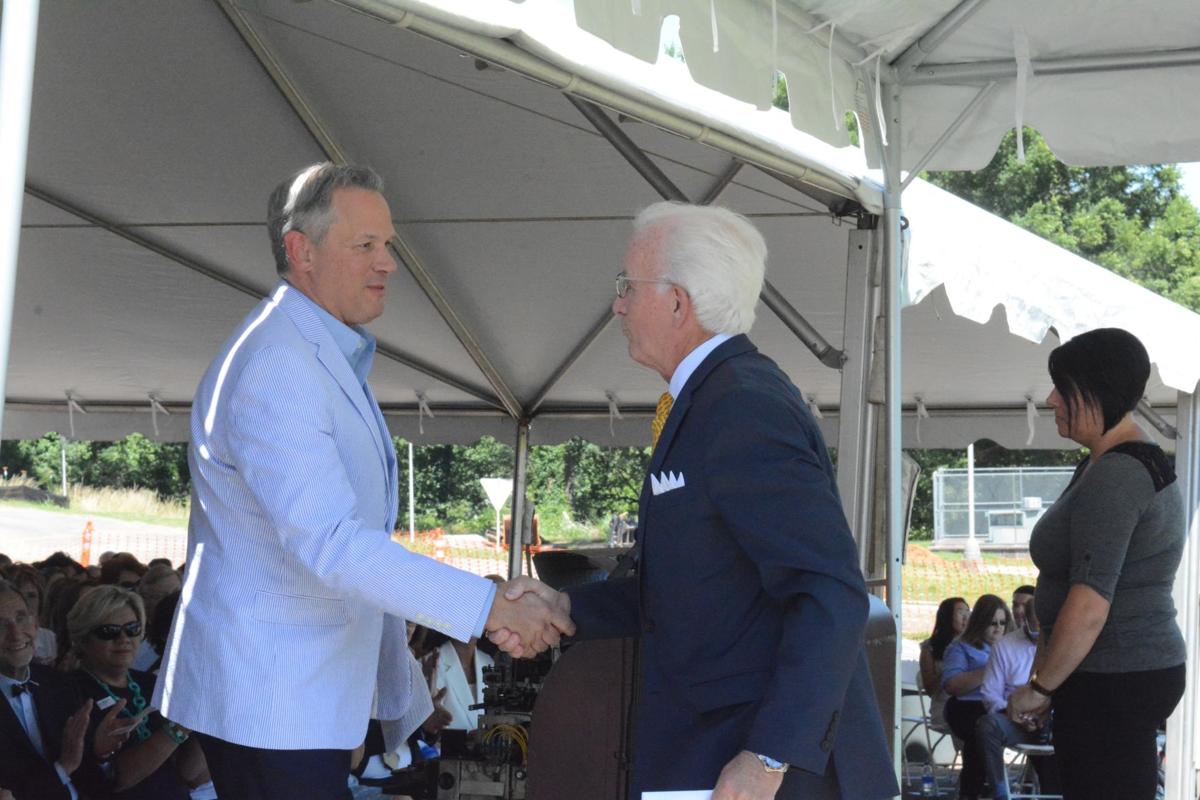 N.C. Lt. Gov. Dan Forest (left) shakes hands with Tom Looney, chairman of the NCSSM Board of Trustees, as Forest makes his way to the podium to speak. 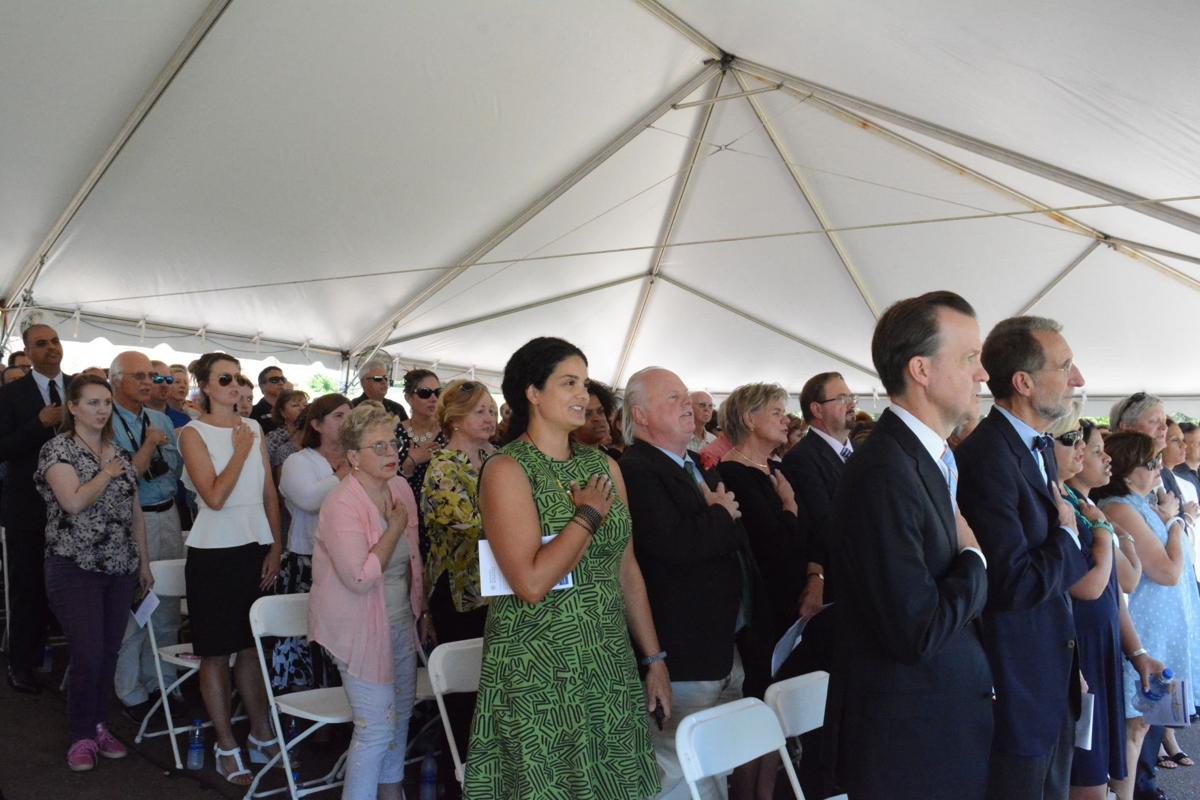 The crowd assembled for the groundbreaking ceremony recites the Pledge of Allegiance. 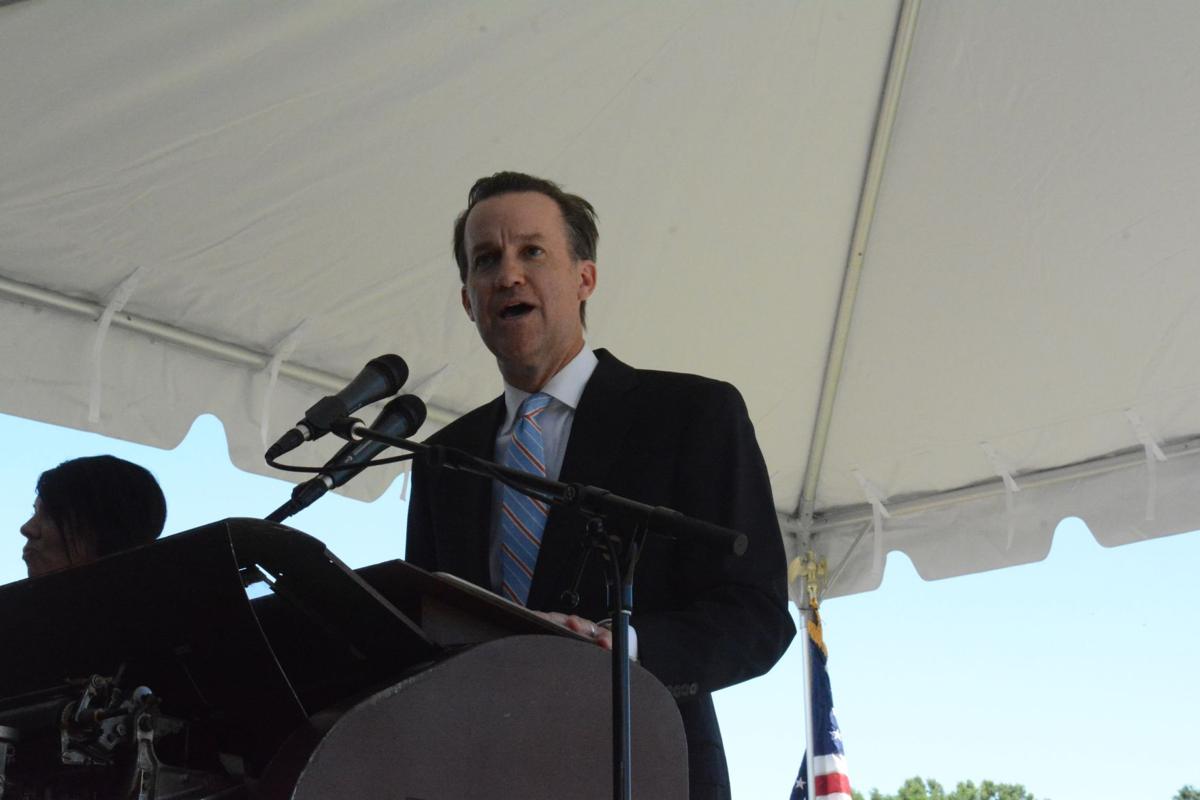 And the school received a big boost from Carolinas HealthCare System Blue Ridge in closing the funding gap to build the school.

Mike Bridges, chair of the board of directors for CHS Blue Ridge, and Kathy Bailey, CEO of CHS Blue Ridge, made the presentation of the $5 million donation to NCSSM Chancellor Todd Roberts and the school’s leadership team.

Bridges told the crowd gathered that the thing that stood out for him at the groundbreaking is how excited everyone is about the school and how eager they are to get the project underway.

“As a parent and in-law of two NCSSM grads, I witnessed the positive impact of the school on the youth of the state and the significant contributions of its graduates , ” Bridges said .

Carolinas HealthCare System Blue Ridge recognizes that the school will enhance the economic development of the area, which is vital to improving the health and wellbeing of Burke County residents, Bridges said.

He said the school’s programs will be an asset to the other educational programs already going on in the county. Bridges said the investment will prepare future students to be innovators as they choose their careers, and maybe lead some back to Burke County.

Bridges said the health care system sees the donation as support to the future prosperity and success of the region.

When Bridges announced how much the health care system was donating, it drew some gasps and a standing ovation from the crowd.

As he stood at the podium after the presentation, Roberts said, “What do you do with something like this,” as he tried to find a pocket on his suit to put the check in. “That’s not something that happens every day,” he said.

The $5 million donation is the largest one in the school’s 40-year history, according to NCSSM.

Roberts said the new campus will give even more students the opportunity to discover their interests and talents and prepare to lead, serve and tackle the challenges faced by the state, nation and world.

He said they have much more critical work to do to get the Morganton campus built.

Roberts said there will be 100 people working on the campus when it is completed and it will open to the first class in August 2021.

The health care system’s donation conveys naming rights for a state-of-the-art comprehensive student wellness and activities center at NCSSM-Morganton, according to the school.

CHS Blue Ridge’s $5 million gift represents a significant step toward the $10 million goal in private donations to support construction of the new Morganton campus, according to a release from the school. The gift puts the total raised for the new campus at more than $7 million since 2018, according to the school.

The majority of the funding for the new residential campus was $58 million from the $2 billion Connect NC bond package that voters approved in 2016. In 2018, the North Carolina legislature appropriated an additional $15 million for the school campus construction.

The projected cost to build the school in Morganton is $78 million.

The business news you need

With a weekly newsletter looking back at local history.

How to Budget When You Hate to Budget

Budgeting is a pain. But what’s more painful is a bill you can’t easily pay, debt that costs a fortune or not having enough money to retire.

How Much Is the Standard Deduction?

Here's what the standard deduction looks like. You can use this information to decide whether it pays to itemize on your taxes or not.

How to Actually Pay Your Taxes

Owe money to the IRS? How do you submit your payment?

Biden signs burst of virus orders, vows 'Help is on the way'

WASHINGTON (AP) — With a burst of executive orders, President Joe Biden served notice Thursday that America's war on COVID-19 is under new command, promising an anxious nation progress to reduce infections and lift the siege it has endured for nearly a year.

Few will ever pay gift tax, but you might have to let the IRS know about some smaller gifts.

How to Right Your Retirement Savings After Coronavirus Setbacks

The COVID-19 pandemic and shutdown upended our lives on multiple fronts. While enduring widespread unemployment and the economic downturn, many Americans leaned on their retirement accounts to help make ends…

States with the largest tax burden

How PPP Rules for Small Businesses Have Changed This Time Around

How PPP Rules for Small Businesses Have Changed This Time Around

N.C. Lt. Gov. Dan Forest (left) shakes hands with Tom Looney, chairman of the NCSSM Board of Trustees, as Forest makes his way to the podium to speak.

The crowd assembled for the groundbreaking ceremony recites the Pledge of Allegiance.