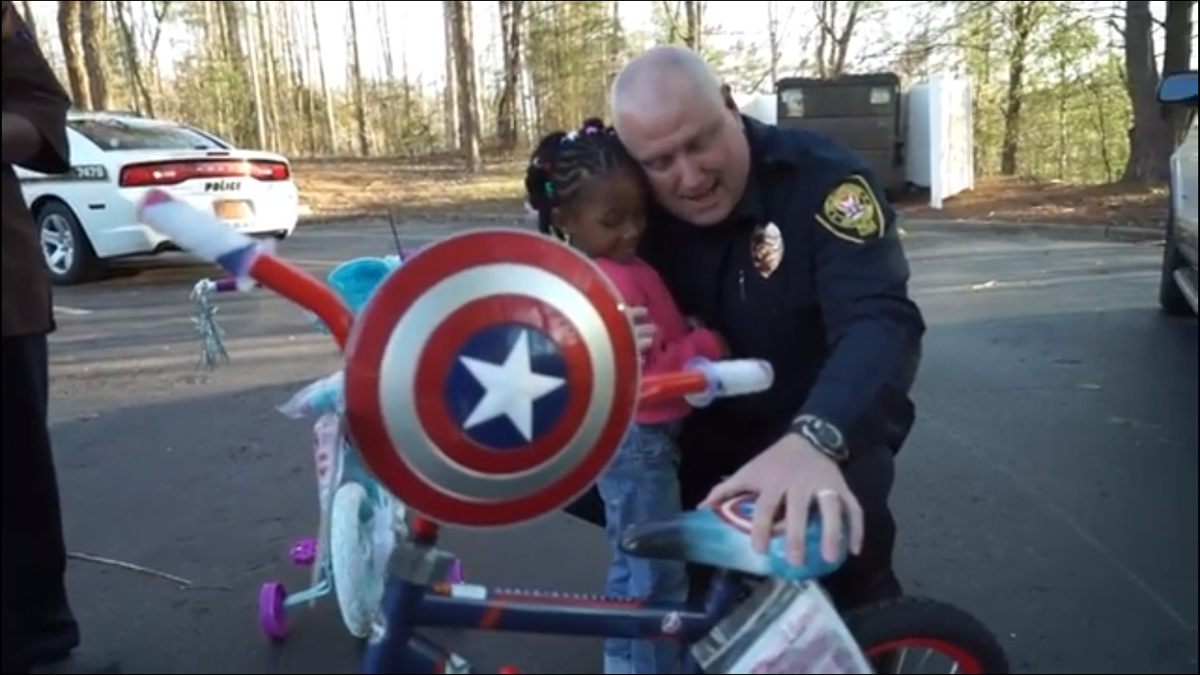 Mike Gates, a public safety officer with MDPS, gets a hug from one of the children who received a new bicycle. 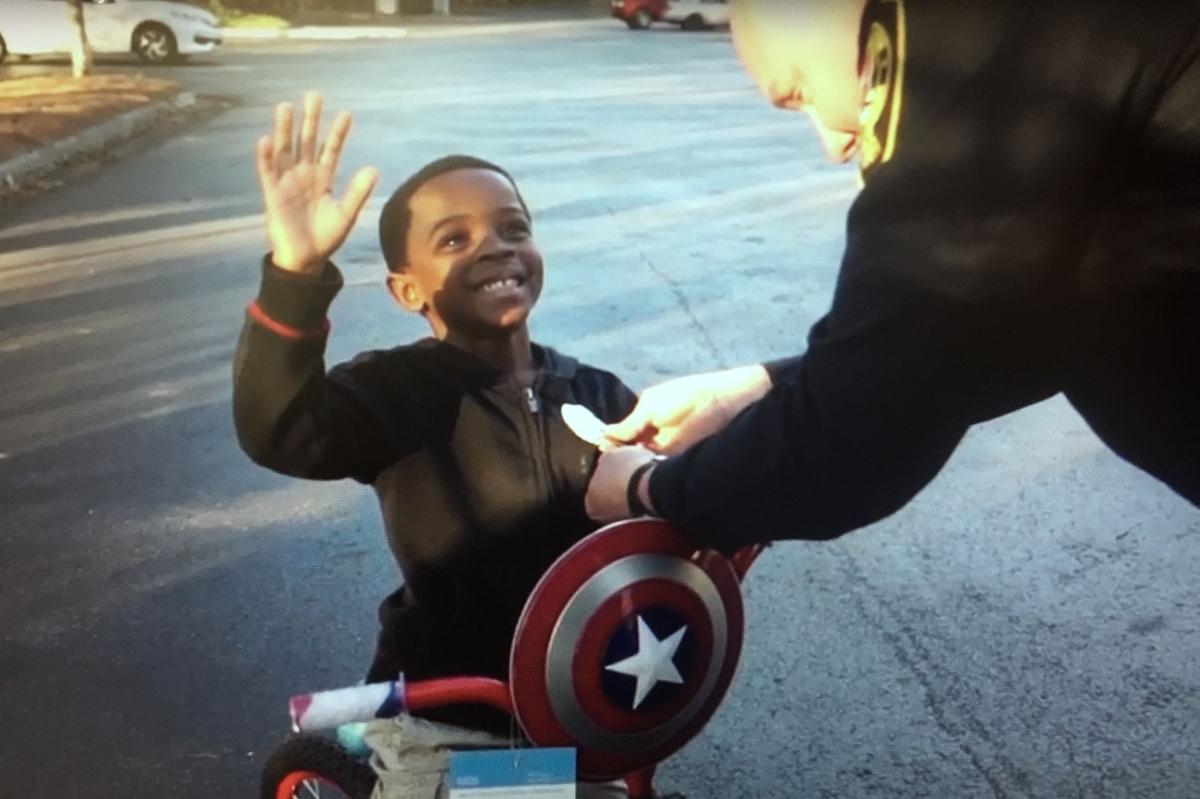 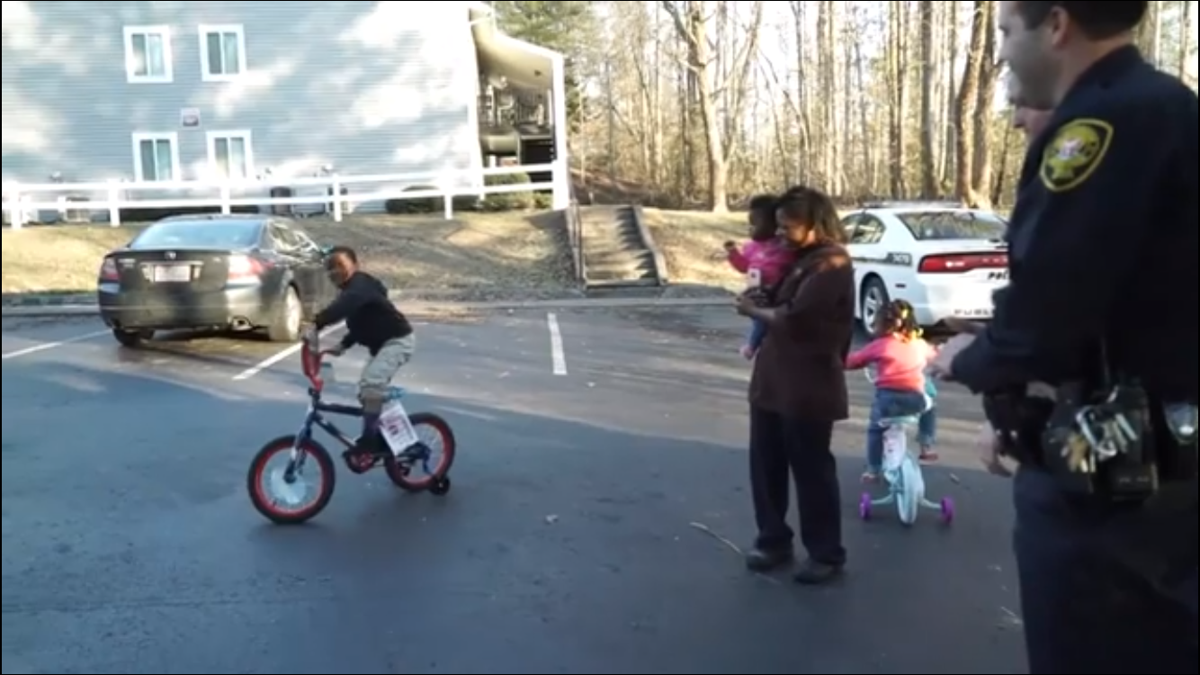 The two children enjoy their first ride on their new bicycles thanks to members of the  community and MDPS.

Police officers in Morganton not only provide safety for those in the community, they also bring smiles and warm the hearts to those who need it most.

On Wednesday, two children who live in the Morganton community had their bikes stolen, which left them and their mother, Britney Parks, devastated.

“She is a single mother and she is doing her best to raise three kids on her own with day care and work and she saved and got those two older children the bikes for Christmas,” said Officer Mike Gates with Morganton Department of Public Safety.

Gates and MDPS Officer Joey Belanger felt the need to intervene in a special way.

Gates says that sometimes, as a police officer, he comes across very genuine people.

“Just from the get-go I had that (feeling) about her and the situation and the disappointment knowing that the children were going to come home with the bike still not there and her having to deal with that as a single mother … I knew there was something we need to do, if we could do it.”

Belanger reached out to members of the community through social media asking if anyone was willing to donate toward purchasing two new bicycles for the children.

“The response from the community was overwhelming,” Gates said.

On Thursday, Gates and Belanger pulled into the parking lot to where the family lived and knocked on the door to surprise the two children, 5-year-old Jacob Wright and 3-year-old Ja'Leah Wright, with brand new bikes.

As seen in a video of the delivery, the two children, one being 5 years old and the other three years old, didn't even remove the plastic or tags from the bicycles before hopping on to test them out.

When MDPS called the mother back to tell her that they would be delivering two brand new bikes, she started to cry on the phone, Gates said.

“She was very, very appreciative of it,” he said.

The best part of the delivery for Gates was seeing the smiles on the kids ' faces and the relief in her (the mother’s) face Gates said.

“That is what made it for me,” he said. “That is why I got into this job is to help people like that.”

In a video posted on the MDPS Facebook page , Belanger says the perception of police officers from TV shows does not show the full picture of what law enforcement is about.

“A lot of folks don’t get to see what goes on behind the scenes in Morganton and Burke County,” Belanger said in the video. “This is what the job is about and it is not just a job, but it is a reminder that we live in a great area with great people and the fact that they are willing to step up and help people who are in need … you just don’t get that everywhere.”

Gates hopes that MDPS is able to do more things like this in the future.

“With things like this and the outreach we saw from the community, maybe we can,” Gates said. “Maybe we can’t do every single one, but maybe there are some that we can more than we have been.”

Gates along with Morganton Department of Public Safety is very thankful to those who donated toward the bikes and made it possible for the mission to be carried out.

Police: Man wrecks car on I-40, runs through woods naked before capture

Witnesses told troopers the man climbed out of the car with a cat in one hand and a beer in the other.

A pedestrian was hit on Burkemont Mountain on Friday night and flown to a Charlotte hospital.

Check out the highest bonds issued in Burke County from June 6-12.

BCSO: Deputy back on duty, suspect didn’t pass out during arrest

Burke County’s COVID-19 cases appear to be on the uptick, and while some hospital systems have made the decision to require employees be vacci…

The Burke County Sheriff's Office Use of Force Policy prohibits deputies from using chokeholds unless deadly force is appropriate.

Local resident Lea Moynihan has not let deafness or blindness stop her from pursuing her dreams and helping others:

His girlfriend had cuts to her face, arms and body, and her mother had multiple bite injuries, according to the Burke County Sheriff's Office. He's considered armed and dangerous.

Johari “J.” Hemphill, a Morganton native and Freedom High School graduate, was recently promoted to the rank of colonel in the United States Air Force:

Mike Gates, a public safety officer with MDPS, gets a hug from one of the children who received a new bicycle.

The two children enjoy their first ride on their new bicycles thanks to members of the  community and MDPS.