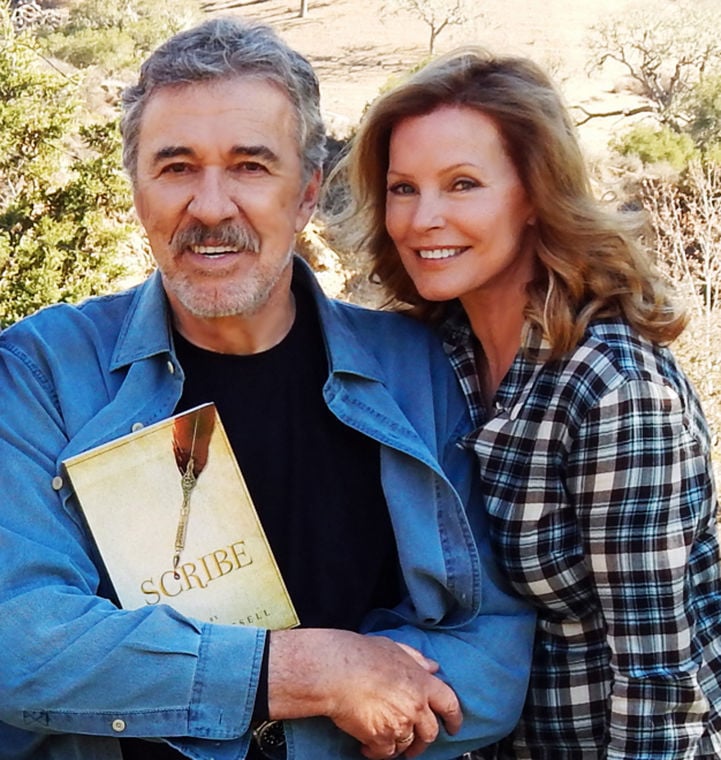 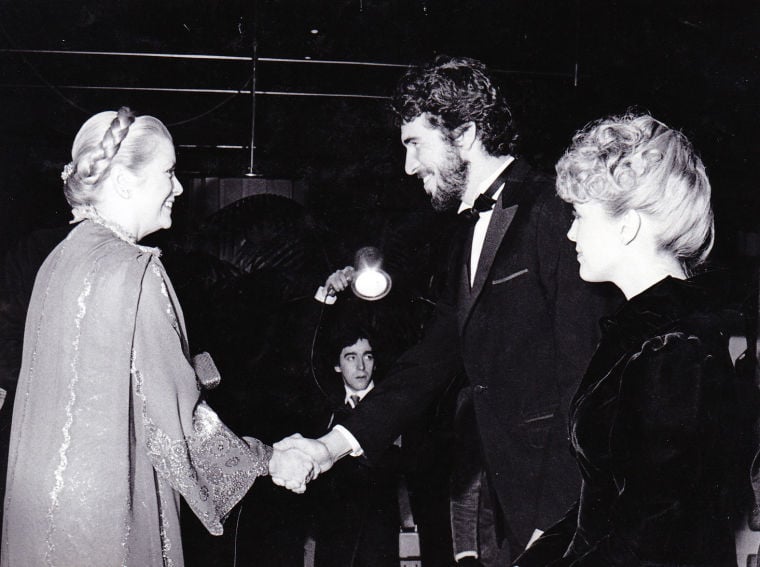 Grace Kelly greets Brian Russell and Cheryl Ladd in 1981. Ladd, a former Charlie’s Angels’ star, appeared in “The Grace Kelly Story,” a 1983 TV movie that dealt with an early slice of the actress-turned-princess’s life.

“ As an actress I wasn’t so much interested in Grace’s life as a princess, but her incredible rise to become one of Hollywood’s great beauties and an Academy Award winner,” said Ladd from her home in Los Angeles.

Kelly’s cinema fame rests largely on just 11 films she appeared in between 1951-56, but many quickly became classics such as “High Noon,” “Rear Window,” “The Country Girl,” and “High Society.”

“ Cheryl and I were in Monaco for a film festival in early 1981 and met Grace and her husband, Prince Rainer, at the palace,” said Russell.

“ When I saw Cheryl and Grace standing next to each other in the reception line, ‘ping!’ it hit me,” he said. “While there was a slight physical resemblance, I was mostly struck by the dignity and serenity they both possessed. Cheryl thought I was crazy when I suggested she could play Grace, but by the time we were on the plane to leave, she was convinced.”

Back in the U.S., Russell took the idea to Brandon Stoddard, then head of ABC.

“ I walked into his office and outlined the project, and before I could sit down he said ‘sold!’” said Russell. “It was the shortest pitch meeting in my life.”

But when news of the planned movie reached the Monaco palace, the opposition was strong.

“ They didn’t want us delving into her private life,” said Russell, who returned to Monaco in the summer of 1982 to meet with the princess. “We sat in the palace garden for about 90-minutes discussing the project. I told her it was not our intention to dredge up any dirt, but to tell her fairytale story.”

As Kelly read the script, Russell recalls her response.

“ She started acting out the part in front of me and I could see she was warming up to the idea," she said. "She would read a section and say ‘oh that’s not exactly what happened.’ She kept a copy of the script and made some suggestions, with the palace eventually giving the movie their blessing.”

Then, just a few weeks before filming was set to begin, Kelly suffered a stroke on Sept. 13, 1982, while driving on a mountain road, plunging her car down the side and dying the following day.

“ I was devastated,” said Ladd. “I’d been preparing for the role for months and had saturated myself with books about her, interviewing people who knew her, and watching her films. Although I only met her once, I felt I had lost someone really close and didn’t want to continue with the movie.”

To their surprise, several months later, Ladd and Russell, who was executive producing the film, received encouraging news from Monaco.

“ They wanted us to proceed because they knew we would treat the story with dignity,” Ladd said. “So I eventually saw my way through it as a celebration of her life.”

While the film glossed over some aspects of Kelly’s Hollywood life, “few people realized how she struggled to overcome her father’s objection to her career choice as an actress,” Ladd said. “And after that struggle, what incredible strength she must have had to give it all up for marriage. That’s the story we wanted to tell.”

Ladd also recognized a similarity between her early career and Kelly's, helping to recreate the character realistically on screen.

“ Going to acting classes, making commercials to get by, and taking small parts to gain experience while struggling for that big role, are all things I could identify with,” said Ladd.

When broadcast in February 1983, critics responded well to “The Grace Kelly Story.” But the best tribute came from Monaco.

“ The word we got back was that in his bereavement, the prince would watch it over and over and thoroughly enjoyed it,” said Ladd. “We couldn’t ask for higher praise.”

Today, Ladd and Russell remain busy acting, writing and producing. Russell recently published his first novel, “Scribe” (see www.scribewriter.com ), while Ladd’s independent film “The Perfect Wave,” is due to be released in the U.S. on July 11 (see www.cherylladd.com ).

While Kidman’s “Grace of Monaco” has yet to be released in the U.S., Ladd’s “The Grace Kelly Story” was re-released as simply “Grace Kelly” on DVD in 2012. Since May, it has been available through Amazon by HD digital download on all player streaming platforms.

Nick Thomas teaches at Auburn University at Montgomery, Ala., and has written features, columns, and interviews for over 400 magazines and newspapers.

Grace Kelly greets Brian Russell and Cheryl Ladd in 1981. Ladd, a former Charlie’s Angels’ star, appeared in “The Grace Kelly Story,” a 1983 TV movie that dealt with an early slice of the actress-turned-princess’s life.