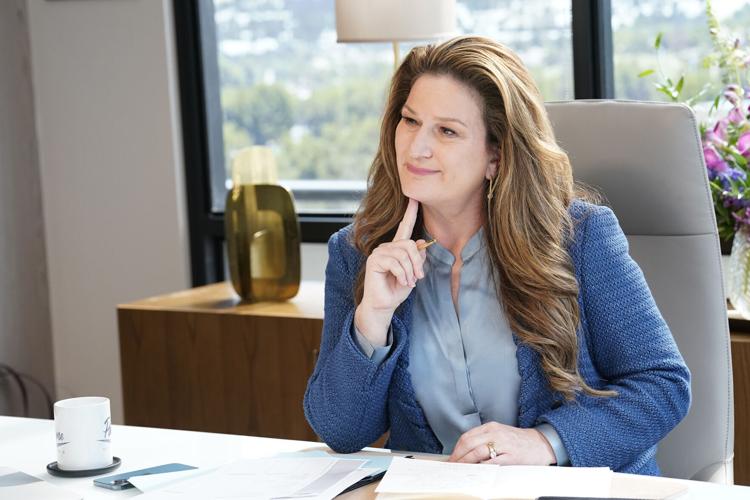 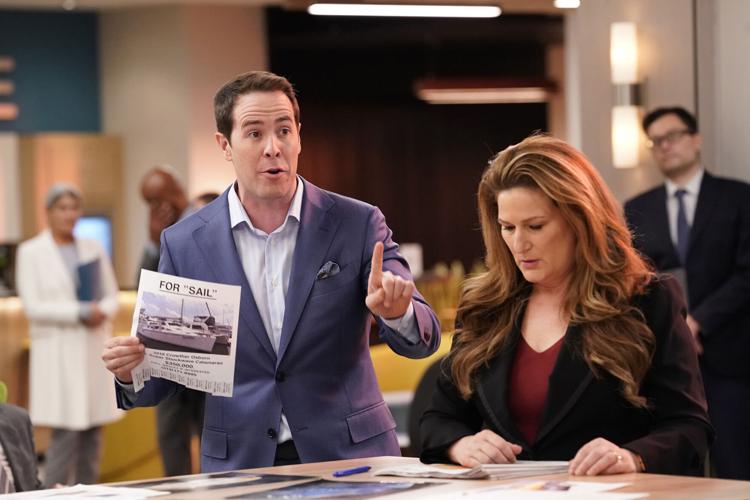 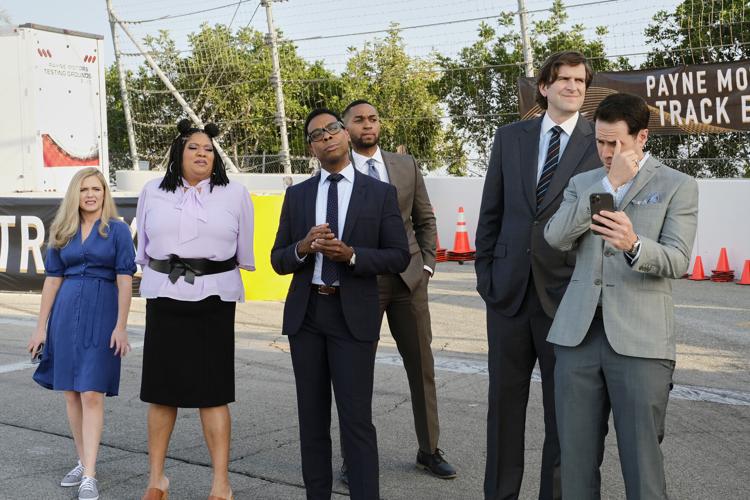 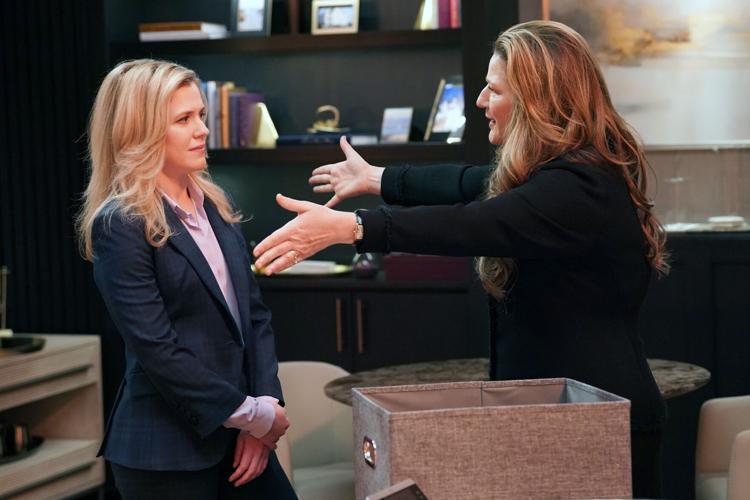 When the Payne motor company is in trouble, public relations specialist Sadie (Harriet Dyer) tries to get the company head (Ana Gasteyer, right) to come up with solutions on "American Auto." 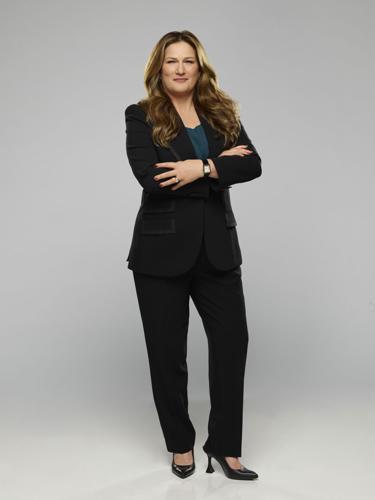 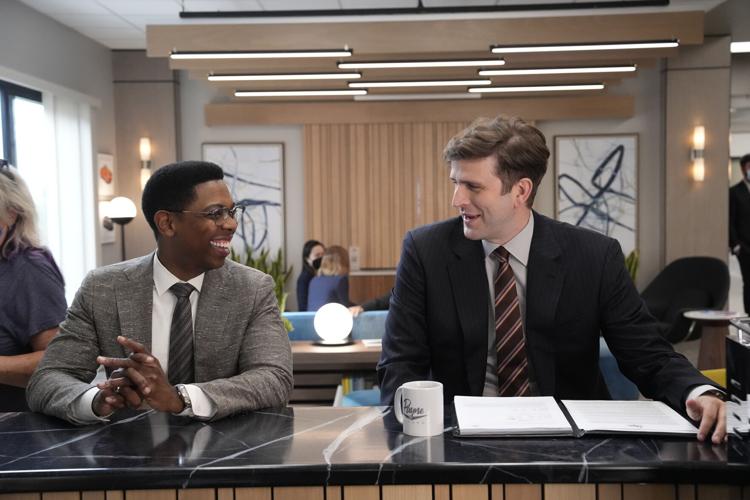 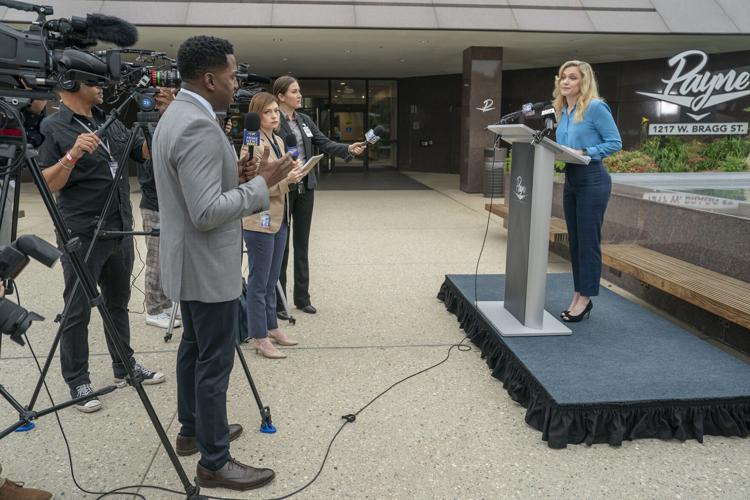 Sadie (Harriet Dyer) has to deal with the press when news leaks about their latest car on "American Auto."

LOS ANGELES – Even though it’s set in the corporate offices of a car company, “American Auto” is just as much a workplace comedy as “Superstore” or “The Office,” says Executive Producer Justin Spitzer.

“There are certain similarities about every workplace show,” he says. “You have people who don’t necessarily like each other thrown together, which creates conflict. You have people working hard not to be fired or to impress the boss. But there are differences.”

Having worked on each of the NBC shows, Spitzer says “Office” showed the foibles of middle management. “Superstore” exposed the working class. And “Auto” is about people at the very top. “They can do what they want. They don’t have a CEO or corporate making them do anything, but they still need to figure out how to deal with a changing industry in a changing world.”

In the second season of “Auto,” Payne Motors CEO (played by Ana Gasteyer) is fighting to keep her job. With stock issues, recall problems and a team that’s concerned about personal problems, it’s a real free-for-all.

Instead of being the target for their employees, Gasteyer’s Katherine is their biggest advocate. She puts her buy-out on the line to bring the company back to prosperity.

“She’s intelligent, but she’s kind of screwed,” Gasteyer says. “She does care a lot about the money but she wants to get vested and that’s the game that’s being played.”

In the first season, viewers learned she was in over her head. Unfamiliar with the car business, she stumbled trying to figure out how to apply her skills to a new industry.

“She’s a good leader,” Spitzer says. “But how do those skills translate to this particular industry?”

Gasteyer says the twist brings her closer to her employees. “We’re more unified and less fractured as a community.”

“And we’re better friends,” says Harriet Dyer, who plays Sadie, Payne’s public relations spokesperson. “In the first season, it was really fun to play us against each other because I was scared of getting fired. But now there’s a bit of a gal pal/buddy comedy aspect of some of the episodes, which I really, really love.”

For the writers, “Auto” is also an opportunity to comment on changes in the industry. Elon Musk and Tesla, production slowdowns, recalls and other headline grabbers give the series another hook.

“Twenty percent of it has to do with the industry,” Spitzer says. “So we do try to address general trends about where the industry is going but also realizing we start writing a story six months before it airs, so we can’t be too topical.”

While producers let the actors improvise when possible, “the need is so minimal,” Gasteyer says. “Justin is incredible at creating a little perfect Rubik’s cube.”

Those ad libs – what the cast calls “fun runs” – lets them add to what is written. “But the writers have done a really great job,” Jon Barinholtz says. “I know there’s been multiple takes where the second the fun run is over, I’ll just say the word ‘useless’ because it’s useless that we did it.”

“Some directors have come in and, if it’s a scene with me and Ana, and said, ‘Do you want to do a fun run?’ and we’ve gone, ‘Not really,’” Dyer says. “We can’t write better than that on the fly.”

Adds X Mayo: “If I’m talking about specific car parts, I can’t improvise. I can’t make up a name for an engine. I got to say, ‘engine.’”

To give the writers more possibilities, Spitzer says he does a brainstorming exercise he used on “The Office” and “Superstore” – unusual pairings.

“We’ll use that to generate stories,” he says. “Hopefully, by the end of this season or Season 3, we’ll have seen just about every permutation.”

And then? There are the cars of Payne, says Spitzer. “It’s always been important to me that Payne is not like the cut-rate, crappy car industry. Payne is a car company just like GM or Ford or any American company. We do stories about the things that go wrong because that’s where you get comedy.”

The Sioux City Journal's Bruce Miller chatted with Sylvester Stallone about what appealed to him about the new crime drama "Tulsa King", how his character is different from other gangsters and the appeal of doing TV after so many iconic movies.

When Dania Ramirez ended a text with “namaste,” the show’s creator knew he had the right person for “Alert: Missing Persons Unit.”

How close is “Yellowstone” to the real Montana?

Five popular artists who have never won a Grammy

Five popular artists who have never won a Grammy

Prince Harry and Meghan Markle’s Lilibet is not the first royal baby to be born in the U.S.

Prince Harry and Meghan Markle’s Lilibet is not the first royal baby to be born in the U.S.

When the Payne motor company is in trouble, public relations specialist Sadie (Harriet Dyer) tries to get the company head (Ana Gasteyer, right) to come up with solutions on "American Auto."

Sadie (Harriet Dyer) has to deal with the press when news leaks about their latest car on "American Auto."