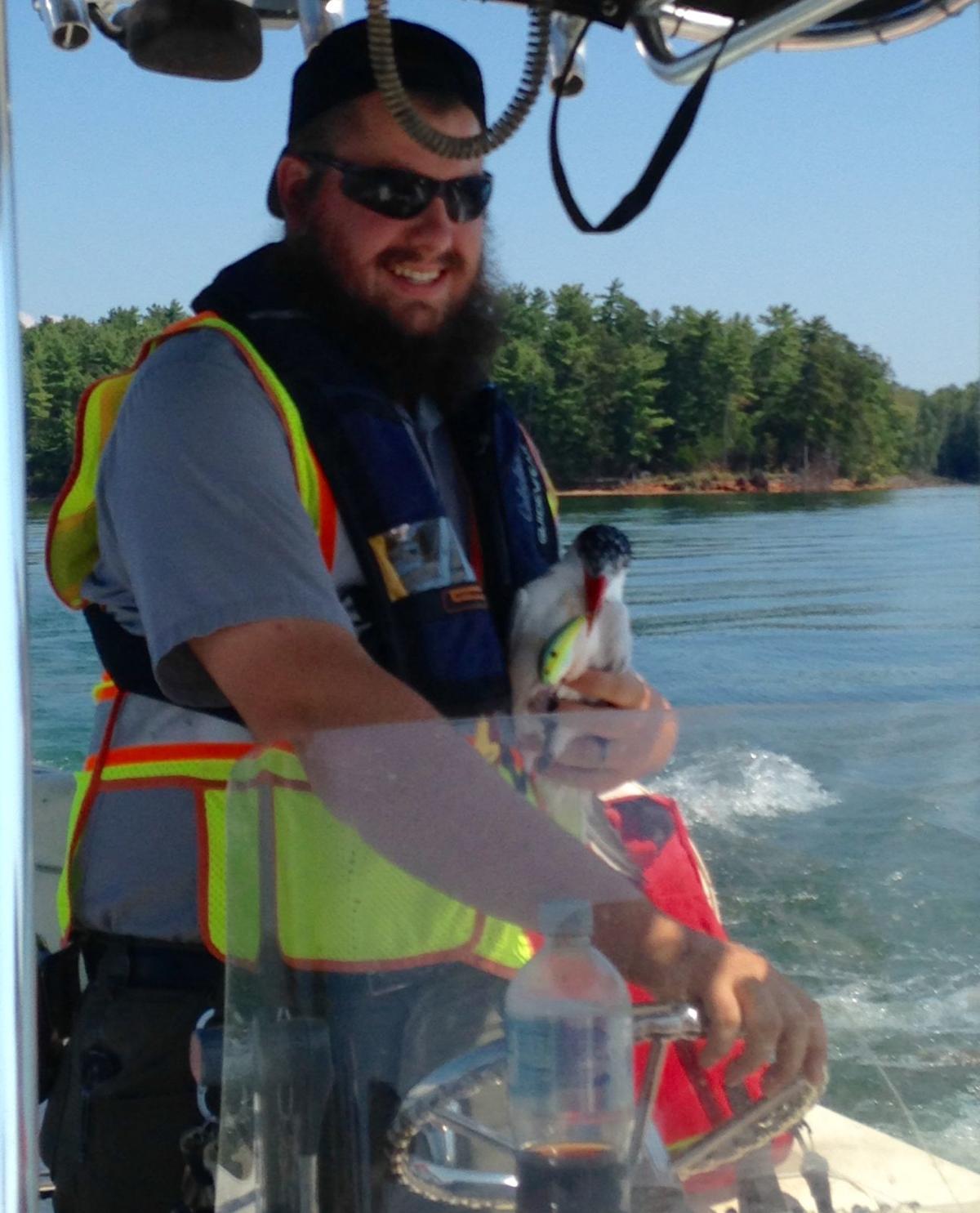 Justin Allen holds a bird he rescued during a boat tour at Lake James during Riverfest. 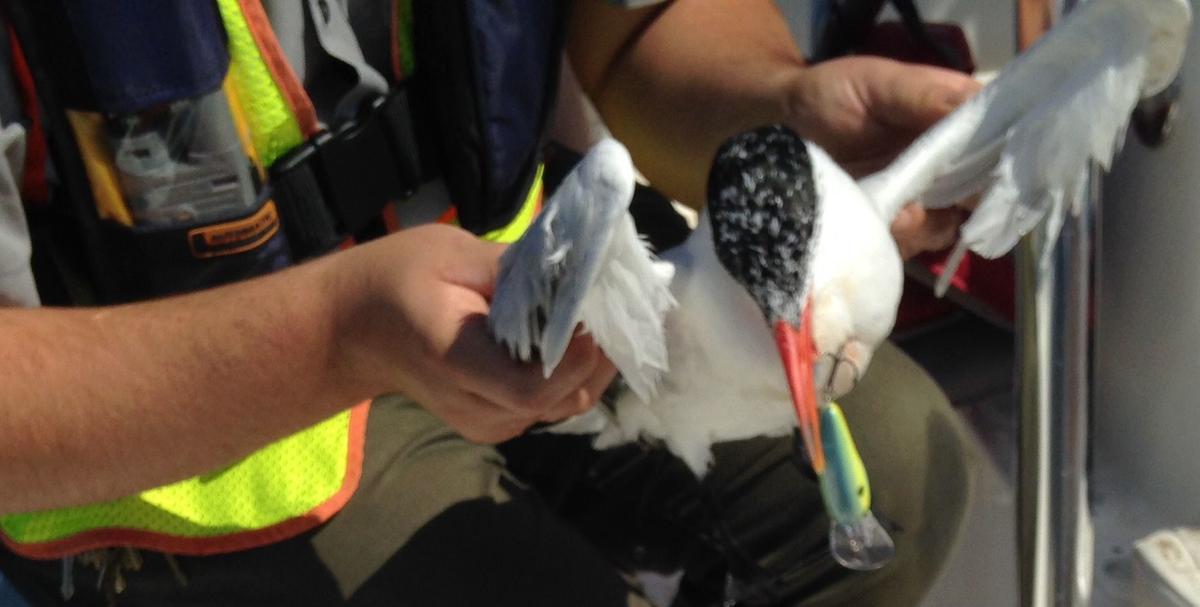 Justin Allen calms a bird he rescued from Lake James during a boat tour at Riverfest. The bird had gotten snagged in in a fishing lure and line. 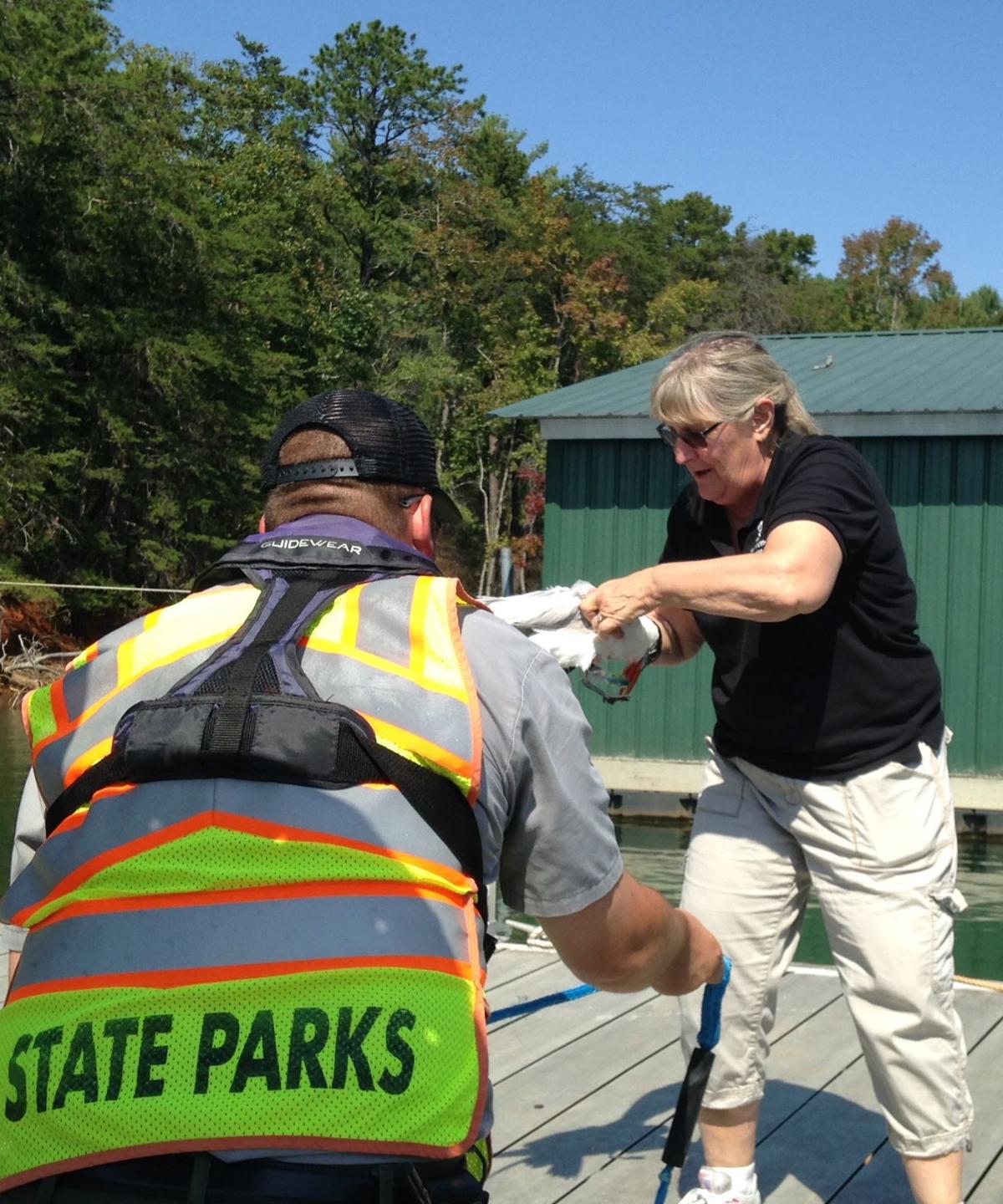 Justin Allen hands off an injured Caspian Tern to a worker with May Wildlife Rehabilitation Center after finding it hooked with a fishing lure in Lake James. 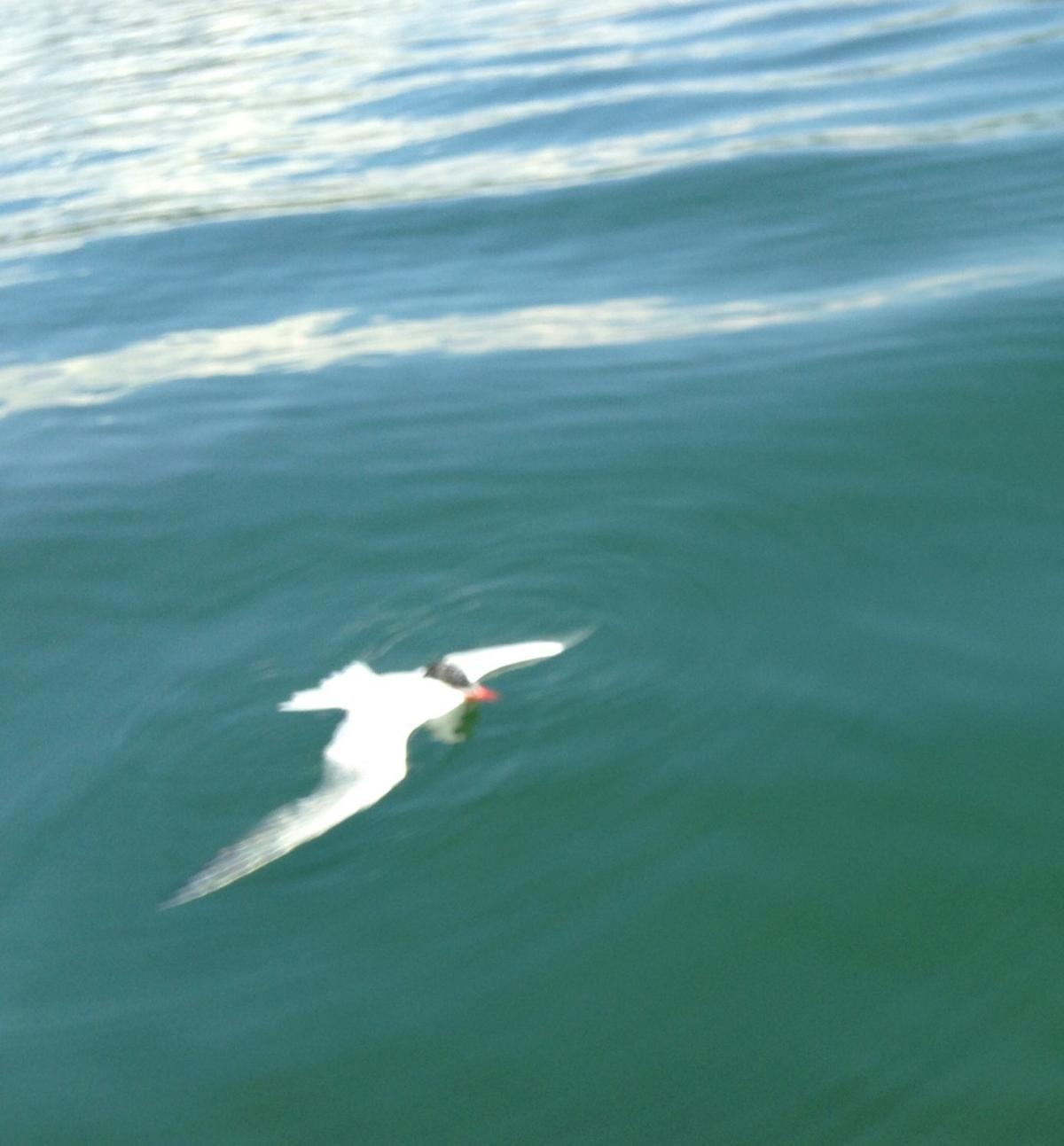 A Caspian Tern is seen struggling to free itself from a fishing lure and line in Lake James.

by Will Mueller News Herald Correspondent

On Sept. 20, The News Herald ran a front-page story about the 16th annual Catawba Riverfest, held at the Paddy’s Creek area of Lake James State Park on Sept. 21.

This festival celebrates clean water (Lake James has the cleanest water of the rivers and lakes making up the Catawba River Basin) and encourages, through the environmental groups represented at the festival today, good stewardship of the lands surrounding these bodies of water.

One group in attendance was the May Wildlife Rehabilitation Center, which is headquartered at Lees-McRae College in Banner Elk, N.C. This group had rehabilitated a red-tailed hawk, which was released back into the wild from the beach at Paddy’s Creek at the event. It was wonderful to see this beautiful raptor leap from the box, in which it had been transported, straight into the sky.

Boat rides! My wife loves boat rides and, since the news article had mentioned boat tours of the lake as part of the festivities, we were lucky enough to get seats on a small craft used by the park rangers to patrol the area waterways. There were seven of us aboard in addition to the “captain,” Justin Allen, usually referred to as “Woody.”

Woody is not a ranger, yet, but has his sights set on moving up in the organization, from his present position as a construction/maintenance mechanic. He was a vast pool of knowledge, telling us facts about different species of birds common to the area. For instance, Ospreys: smaller than eagles, spot fish from a good height above the surface, fold their wings back along their body, and plummet beak-first straight into the water at between 30 and 50 mph. Do they have some kind of cushioning inside their skull to protect their brain from the impact with the water? I don’t know, but I do know I get a headache just thinking about it.

Second example, Eagles. Two types of eagles frequent this area. Golden Eagles, with dark feathers and a dark crown. Then, Bald Eagles which, until they reach maturity at about 5 years of age (a few at 4 years) have a dark crown and can easily be mistaken for a Golden Eagle. Then in the fifth year, the color of the crown changes from dark to white, making it easy to recognize.

Woody told us about a new visitor’s center being planned, with a lot more parking, a pedestrian bridge across a narrow part of the lake which will also be used by park personnel for moving supplies, etc., and also for transporting people with injuries back to where they can receive aid. This new area across the water also may have campsites, hiking trails, and other amenities for park visitors.

So after digesting all this foregoing information, we’re cruising along, going fast enough that the bow spray on both sides of the boat is so high in the air that we can see a complete rainbow on each side. Time to say, at this juncture, that at no time did we feel in danger from the speed of the boat. Woody was a careful guide, and most of the time we were just idling along, absorbing information about the lake and its furry and feathered residents. Then, ahead and to starboard (that’s “right” to you landlubbers) was a white shape, appearing to be trying to lift itself out of the water. As we got closer, we could see that it was a bird attempting, unsuccessfully, to fly. Woody, after a few tries, maneuvered the boat close enough that he could reach over the side. While he was doing this maneuvering, I could see that something was pulling the bird’s head down, causing water to wash over its beak and into its “nostrils.” It was having a hard time blowing that water back out so it could breathe. It had its wings fully extended from trying to fly, and Woody reached down, lifted it out by supporting its wings, then slowly and gently folded the wings back along its body.

The bird, obviously stressed from its ordeal, made an attempt to either stab or bite its rescuer. Its bill was approximately 3-inches long, bright red and tapering to a point, which could have done some damage to someone not familiar with handling creatures in the wild. Now that it was out of the water we could see that, hanging from its beak or tongue was one barb of a triple-barbed hook, which was attached to a large lure and monofiliment fishing line. Woody cut the line close to the lure, and a teenage boy, one of the passengers, pulled 80-100 feet of line from the water. Nothing was attached to the far end of the line.

A second barb on the hook appeared to be piercing either the neck or breast of the bird. Woody tucked the Tern (it was later determined that it was a Caspian Tern) into the crook of his arm, and it immediately became calm.

Our captain pointed the craft back toward the dock, said we were going to have to cut the tour a little short, got on his radio to his co-workers ashore, advised our situation, and was told that a member of the Mays Wildlife Rehab Center would meet us at the dock. She was waiting when we docked, took the tern from Woody, cut the barbs piercing its body, removed the hooks, and stated that it would be transported that afternoon to Banner Elk to get its wounds stitched up.

This group has between 1,000 and 1,500 birds and four-legged animals under its care. Some of those creatures will mend enough to be released back into the wild (such as the red-tailed hawk mentioned earlier), and some will need to find a home with humans involved as they will not be able to survive in the wild.

This Caspian Tern is a beautiful animal, approximately 16-inches long, with a wingspan of 24 to 30 inches. The bill is bright red changing to black close to the tip. Its head and the back of its neck are black with flecks of white. The body is white, the wings are white to light grey at the body, changing to dark grey or black at the wingtips. This description does not do the bird justice. Look it up on the internet and see the photos for yourself.

This bird was definitely within a few minutes of drowning, and Providence guided us to be there right then. It seems to be harder and harder to find beauty in this world of ours, and I feel privileged to have been present during the rescue of this example of Creation’s beauty.

Justin Allen holds a bird he rescued during a boat tour at Lake James during Riverfest.

Justin Allen calms a bird he rescued from Lake James during a boat tour at Riverfest. The bird had gotten snagged in in a fishing lure and line.

Justin Allen hands off an injured Caspian Tern to a worker with May Wildlife Rehabilitation Center after finding it hooked with a fishing lure in Lake James.

A Caspian Tern is seen struggling to free itself from a fishing lure and line in Lake James.