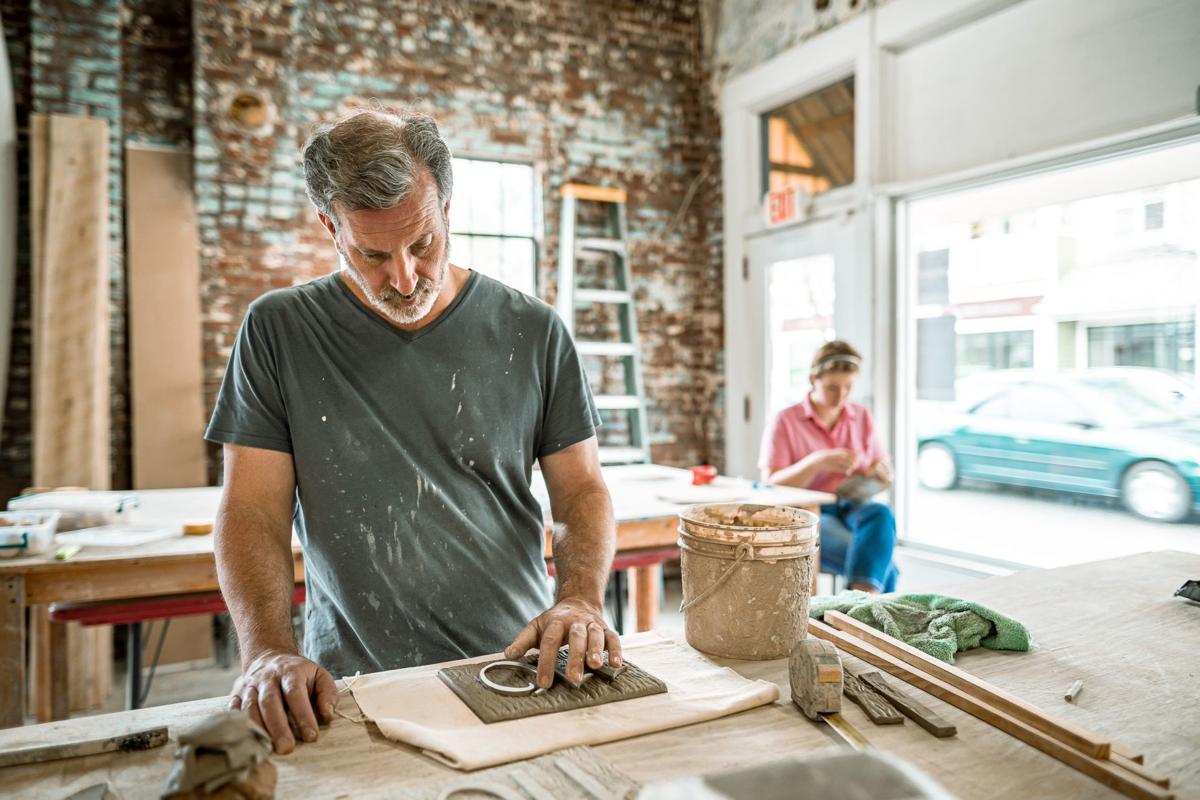 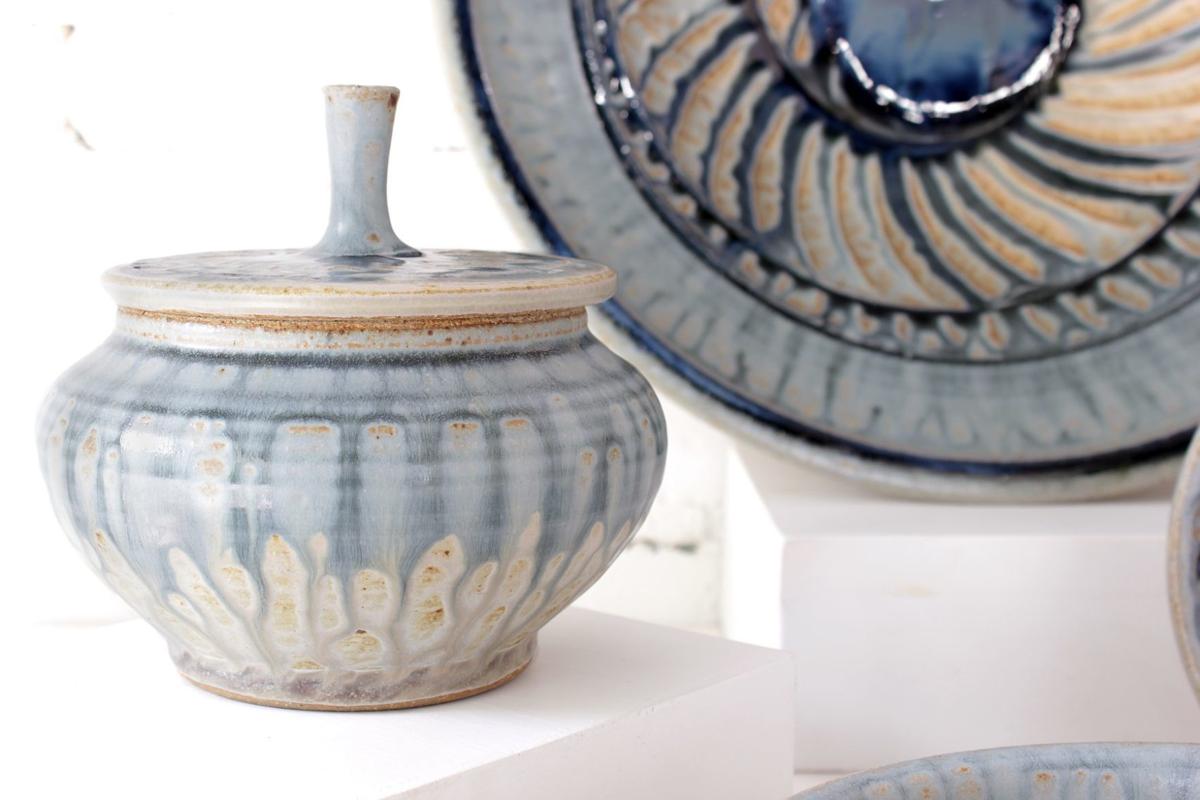 Pictured is some of the work of Hamilton Williams Gallery and Studio.

That will be exemplified with an upcoming 25th anniversary party to launch an exhibition filled with works unlike anything Hamilton Williams Gallery and Studio has featured in the past.

“The exhibition is our new Nautilus collection,” Williams said. “They basically have the general appearance of chambered nautilus vases that are carved into the surface of the pieces that they’re on. It’s kind of a glazed palette that we have evolved just for that body of work. They’re based on ash glazes, which is a category of glazes that use wood ash as a primary ingredient.

“We kind of developed some new things there that haven’t generally been seen before. They’re kind of lighter colors. Ash glazes tend to be fairly dark. They’re often iron-rich, so they tend toward earth tones. But we’ve come up with the very beginnings of a glaze palette lighter in color, more transparent and kind of off-white, which within the industry is kind of a big deal for us.”

The party will be held Friday from 5:30-8 p.m. at the gallery, at 403 E. Union St. in downtown Morganton. Live music will be provided by Todd Greene with Buddy Farler and Antoinette Olesen.

For Williams, celebrating a silver anniversary in pottery means a lot. For a trade that doesn’t necessarily go hand in hand with longevity, a love of the medium and an ability to change up the pace — such as with the Nautilus collection — have kept Williams going even as some of his peers have dropped out.

“It means quite a bit. It doesn’t seem like it should have been 25 years already,” Williams said. “Among potters, there are a lot of professional potters in the state of North Carolina, so we’re kind of a pottery-rich state, and there are lots with longer careers than mine, even. But there’s a large attrition rate. A lot of people starting out about the same time that I did in clay have kind of moved on to do other things. It’s not always the most lucrative profession. So, as people get married and have kids, they try to find more traditional jobs in other industries.

“We’ve kind of held on and made a good go of it since then. But in 25 years, we have been able to see a lot of changes in the craft industry marketplace that we’ve been able to ride out pretty well and take advantage of, in some cases. Mostly, I just have a love of working with clay as a material. It is such a versatile medium that you can do so many things with it. One of the tricks has been to reinvent every so often.”

When Williams begins to get burnt out, he will do an about-face and tackle a project totally unlike anything he has worked on in the previous few years. The process of tackling a new project leaves him feeling “invigorated” in his clay work.

“That’s kind of what this exhibition event represents,” Williams said. “This Nautilus line is kind of a new direction for us. It’s not anything we’ve ever done before. It differs in color and style from previous bodies of work, so it kind of represents a refresh in my career and for me, creatively and personally.”

Some of Williams’ other recent work has been lauded, as well, such as a bowl he created and entered into Our State Magazine’s 2019 Made in N.C. Awards that has been chosen as a finalist.

As he looks forward to the next 25 years — or however long his career may last — Williams believes he is well-positioned to tackle the next string of projects coming his way.

“I hope for continued development as an artist, primarily,” he said. “Obviously, we want the business to continue to grow and develop and adapt to changes in the market and to what people want. We’re actually trying to develop the brand more now and going into the next year. We’ve had some growing pains as we moved from the studio in Valdese into Morganton. We’re now, as of (last Friday), on our sixth anniversary of being in this space in downtown Morganton. I’m trying to balance managing the retail in the gallery versus making pottery in the studio and continuing to be creative.

“That’s been kind of a balancing act or a juggling act that I, personally, have struggled with. The way I tend to work, I’m really good at focusing in hard on one thing, or maybe two things, and just running with that for as long as the mojo holds. And once that peters out, I’ll jump to something else and run down that rabbit hole for as long as I can. That’s really my most productive mode of working, but it’s not exactly the most efficient mode when you’re running a business.”

To counterbalance that, Williams has opened up some managerial rabbit holes, as well as his creative rabbit holes. Doing that has allowed him to know what needs to be done, devoting the appropriate amount of time to both the studio and the gallery. Williams expressed gratefulness for continued good health and good help, the latter from Mackenzie Gullett, who helps run the gallery and the studio, and from Williams’ parents, Dot and Wayne.

To those ends, Williams is working on developing the gallery’s website for the first time since moving his studio. The business also has contracted with a social media management company to build Hamilton Williams’ presence on Facebook and Instagram and to introduce it on platforms like Twitter, Google Business, Yelp and more.

“That’ll give us a way to appeal to the market that is going to be most interested in our work, both nationwide and more regionally,” Williams said. “We’re really looking forward to that, and the timing is right because it’s hitting us right as we’re getting into the holiday season and as we’re expanding our production for the first time since we moved into downtown.”

Williams hopes that expansion gets into larger outdoor and installation pieces. He already is doing some of that kind of work with a retaining wall that will become a tile mosaic at his new downtown home about a block away from the gallery.

For more information about Hamilton Williams Gallery and Studio, visit hamiltonwilliams.com, call 828-438-1595, or check out the business’ Facebook page at facebook.com/HamiltonWilliamsClayWorks.

Pictured is some of the work of Hamilton Williams Gallery and Studio.