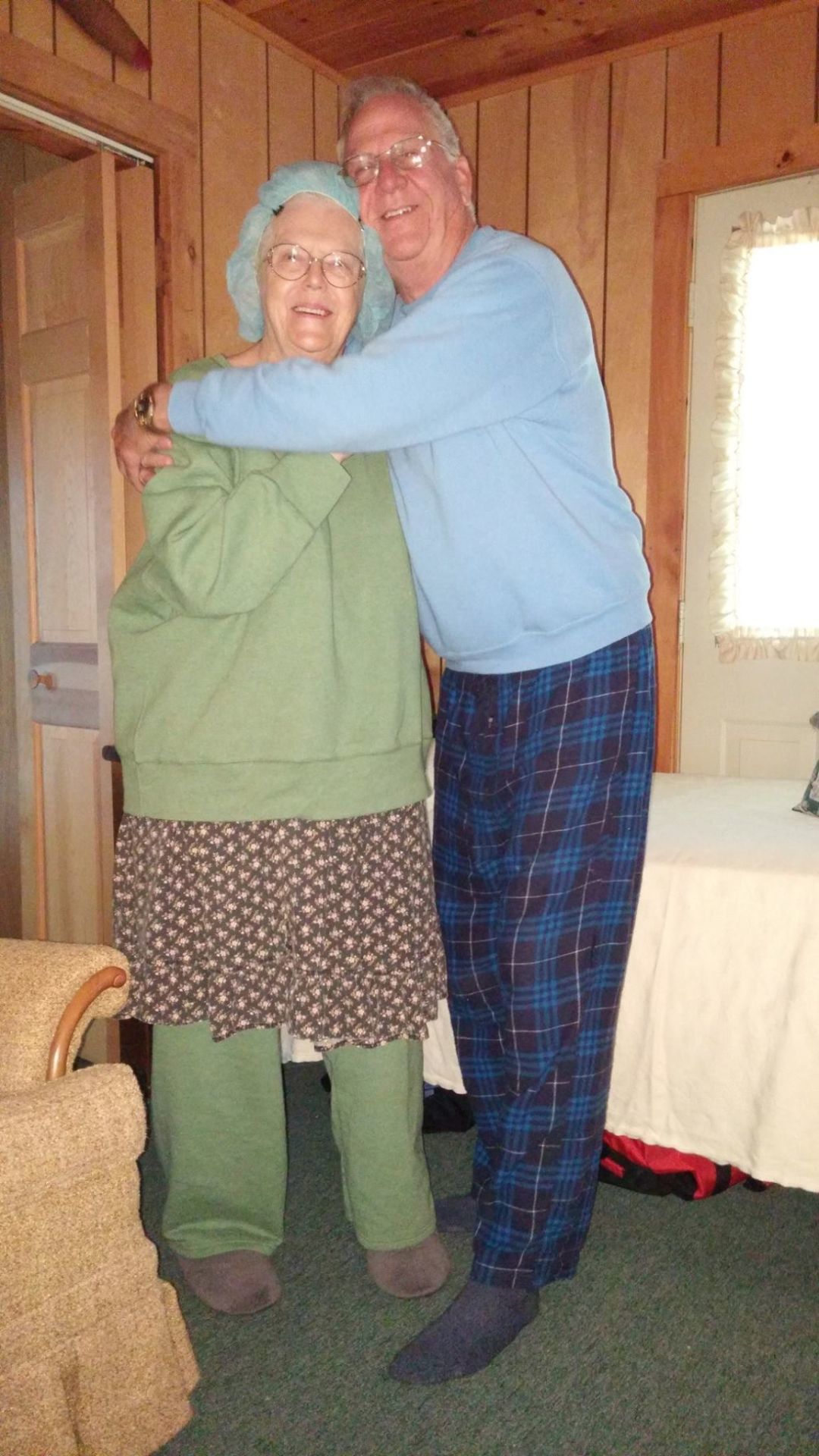 The author's aunt and father pose for a photo shortly before going to sleep in the living room at the cabin in Maine. 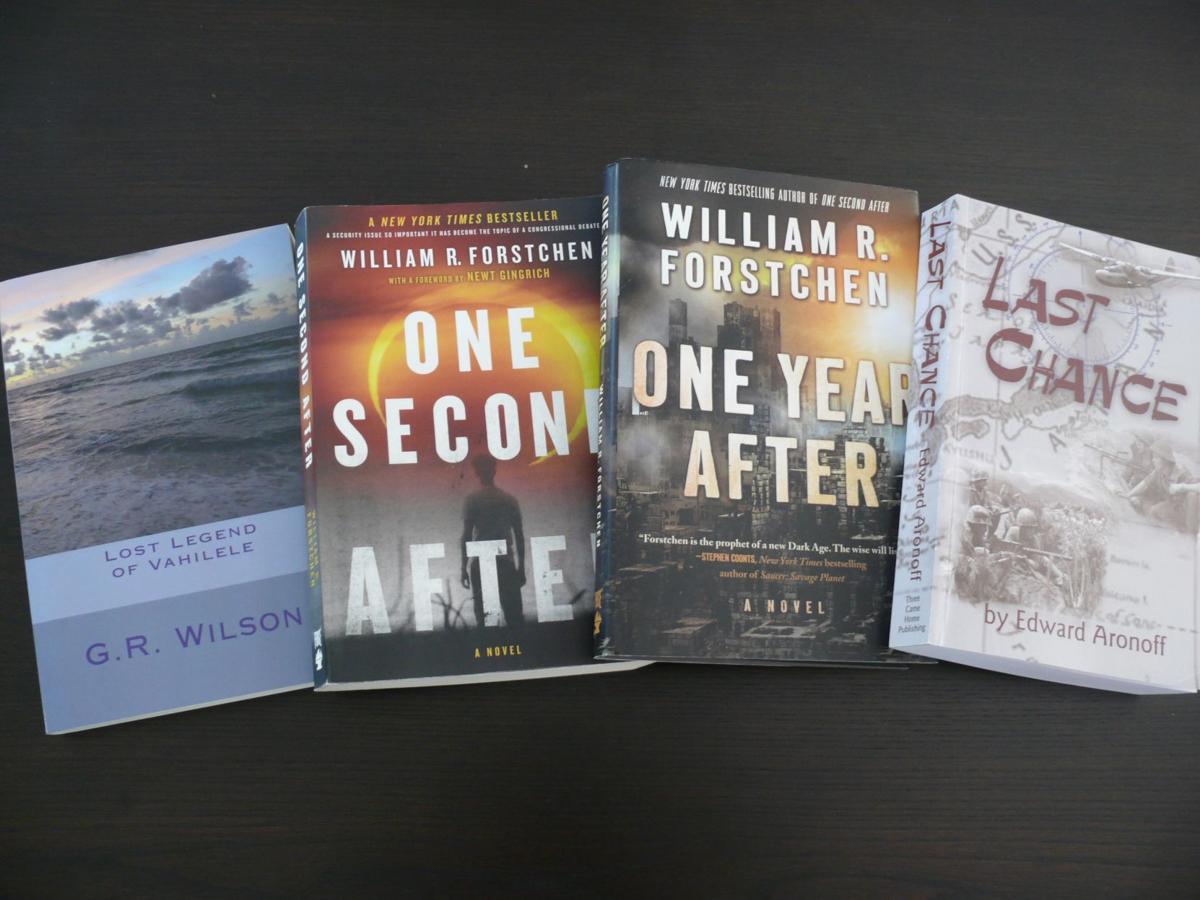 Pictured are the books the author read while on vacation.

I recently took a monthlong vacation with my dad and aunt at our rustic camp on Crescent Lake in Maine. My husband stayed home with our dogs because one was having health issues.

The camp has one bedroom and a half bath, with no shower; tub; or hot, running water. Water from the lake is pumped into our camp unfiltered. If it’s storming outside or boats are making waves, sand comes in with our water. We buy bottled spring water and heat it on the stove for sponge baths or so Dad can shave. It takes a lot of time and effort for all of us to get ready in the morning.

The bedroom has a queen-size bed, but everyone who sleeps in it will find themselves in a sinkhole in the center no matter how close to the edge of the bed they try to sleep. It takes many helping hands to haul the unfortunate sleeper out of the hole, so everyone just uses the bedroom as the dressing room.

We all sleep in the living room. We have three twin beds spread around the room and two couches: Dad on the couch and my aunt on the bed behind Dad’s couch, so both can be close to the bathroom. I sleep on the opposite side of the room, far from their snores and many trips to the bathroom.

I took four books — “Lost Legend of Vahilele” by G. R. Wilson, “One Second After” by William R. Forstchen, “One Year After” by Forstchen and “Last Chance” by Edward Aronoff. One a week and set that as my goal.

Dad is hard of hearing, even with his hearing aid, so the volume for the television is pretty loud and stays on until my aunt falls asleep.

I really wanted to get into the story of “Lost Legend of Vahilele,” so I waited until everyone was asleep and read by the light of my tiny flashlight. As I turned the pages, engrossed in the story, I felt little gnats swarming around my head and attacking me. They flew around my flashlight and around the light reflecting on the page. Swatting didn’t help, so I started squishing their menacing bodies inside the novel, not something I would normally do, but I wanted to read the story. I read until 2 a.m. each night for three nights until I finished it.

The story features Princess Lapita and her tribe, who live on an isolated Fiji island. The tribe holds to its own customs, history, rituals and secrets, until other societies, wanting to conduct trade with it, bring disease and death to the tribe. A ship wrecks near the island and the surviving men swim to the shore and stay, forcing their traditions and ways onto the remaining members of the tribe. The different societies try to coexist while struggles for power ensue until one group rises as the victor.

I was sad when I finished the book, because I wouldn’t be able to learn anything more about Princess Lapita.

“One Second After” is a novel that takes place in Black Mountain, North Carolina. The story also mentions Asheville, Montreat College, Morganton and many other places that locals will recognize.

I noticed in the acknowledgments section that Forstchen mentions an author friend, Jean Shepherd, who was his neighbor in Maine. What a coincidence, I’m in Maine, reading a novel written by a man who also lived in Maine, who now lives in Black Mountain, while I live in Morganton.

The story begins in Black Mountain on an ordinary day until a nuclear bomb detonated above the Earth’s atmosphere generates an electromagnetic pulse. It short-circuits all electronic devices the wave touches: The electricity goes out, computerized devices stop working, cars stop in place, planes crash, etc.

Being at camp without the conveniences of showers; clean, running water; or central air-conditioning helped me to really understand what the characters were going through, although my situation was temporary.

I woke up each night wondering what happened next and opened it back up and continued reading. It took two days to read.

The next day, I went to shower at my cousin’s house, and he told me I looked like I just got off a bender.

I discovered all four of the books I took on vacation were written by North Carolina authors. I didn’t plan that — they were just books that I wanted to read, but never found time.

Vacations are fun, but it’s great to be home with hot running water, heating, airconditioning, clean dishes, a dishwasher, a tub/shower combination, and plenty of other modern conveniences. The only thing lacking is time to read.

Barbara Jolly-Deakle is a News Herald correspondent and a member of the Morganton Writers Group. She can be reached at BabbyWrites@CompasCable.net.

The author's aunt and father pose for a photo shortly before going to sleep in the living room at the cabin in Maine.

Pictured are the books the author read while on vacation.