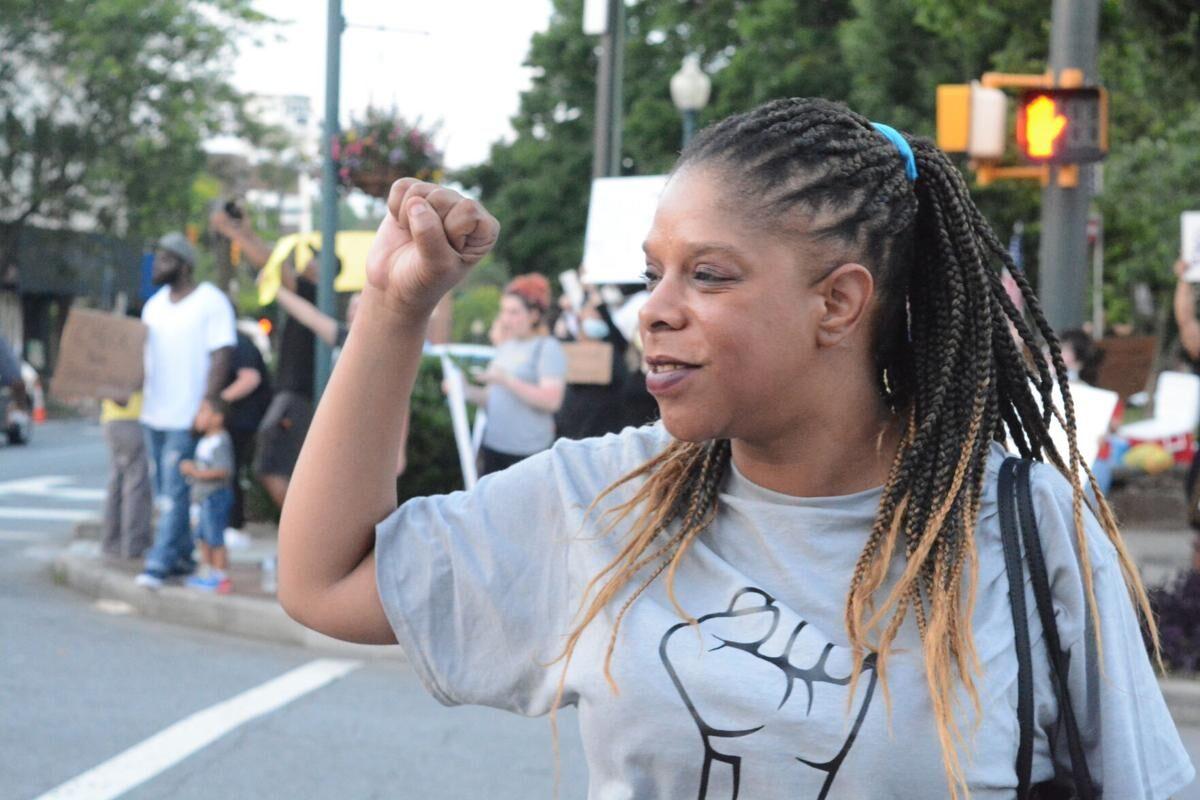 A woman marches across South Sterling Street during a Black Lives Matter protest in downtown Morganton on June 3. 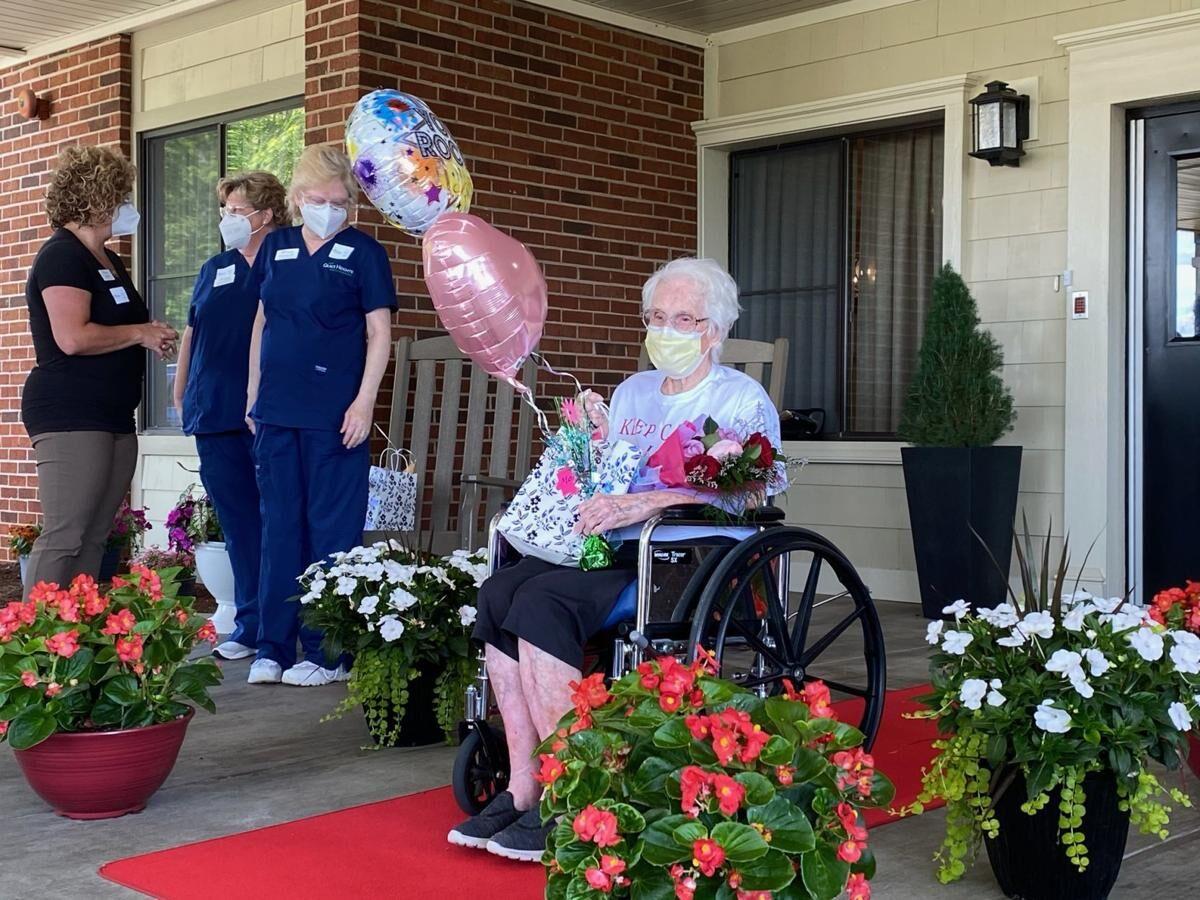 Lola Gantt, 92, was honored as a COVID-19 survivor after an outbreak struck Grace Ridge Health & Rehabilitation Center. The drive-thru event allowed family members to send wishes to family members who overcame the virus. 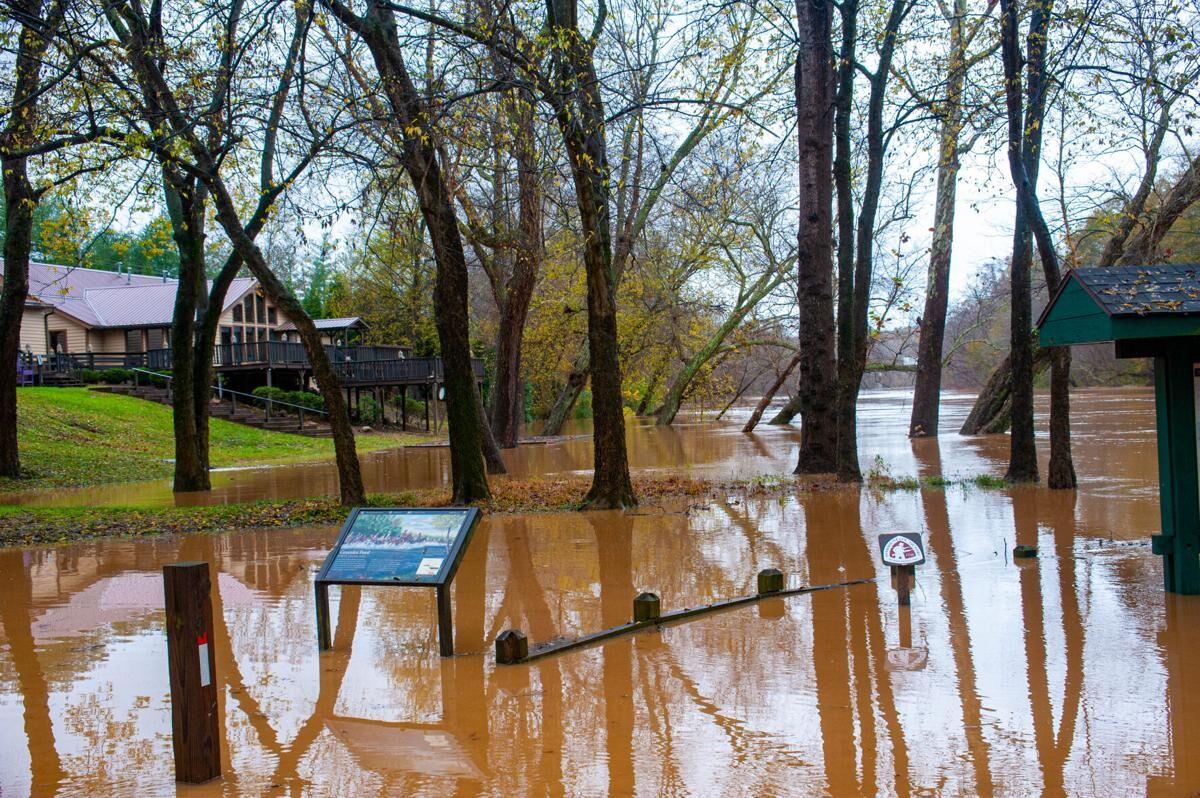 The Catawba River swelled and covered parts of the greenway in Morganton after heavy rains from a tropical storm fell across Burke County in November. 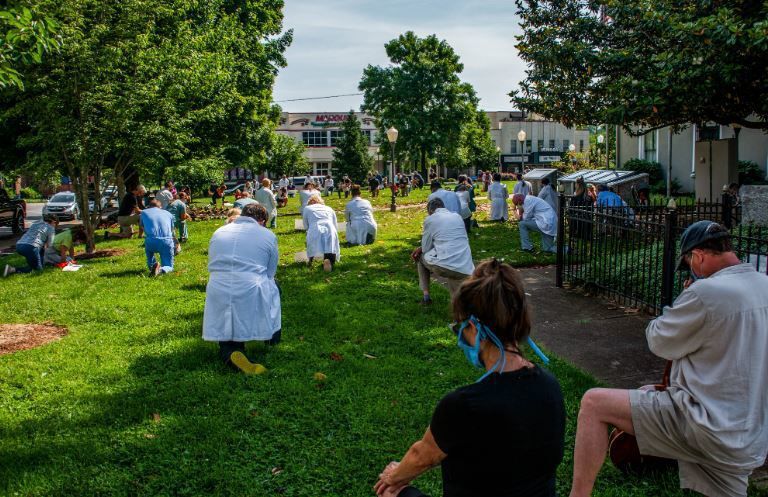 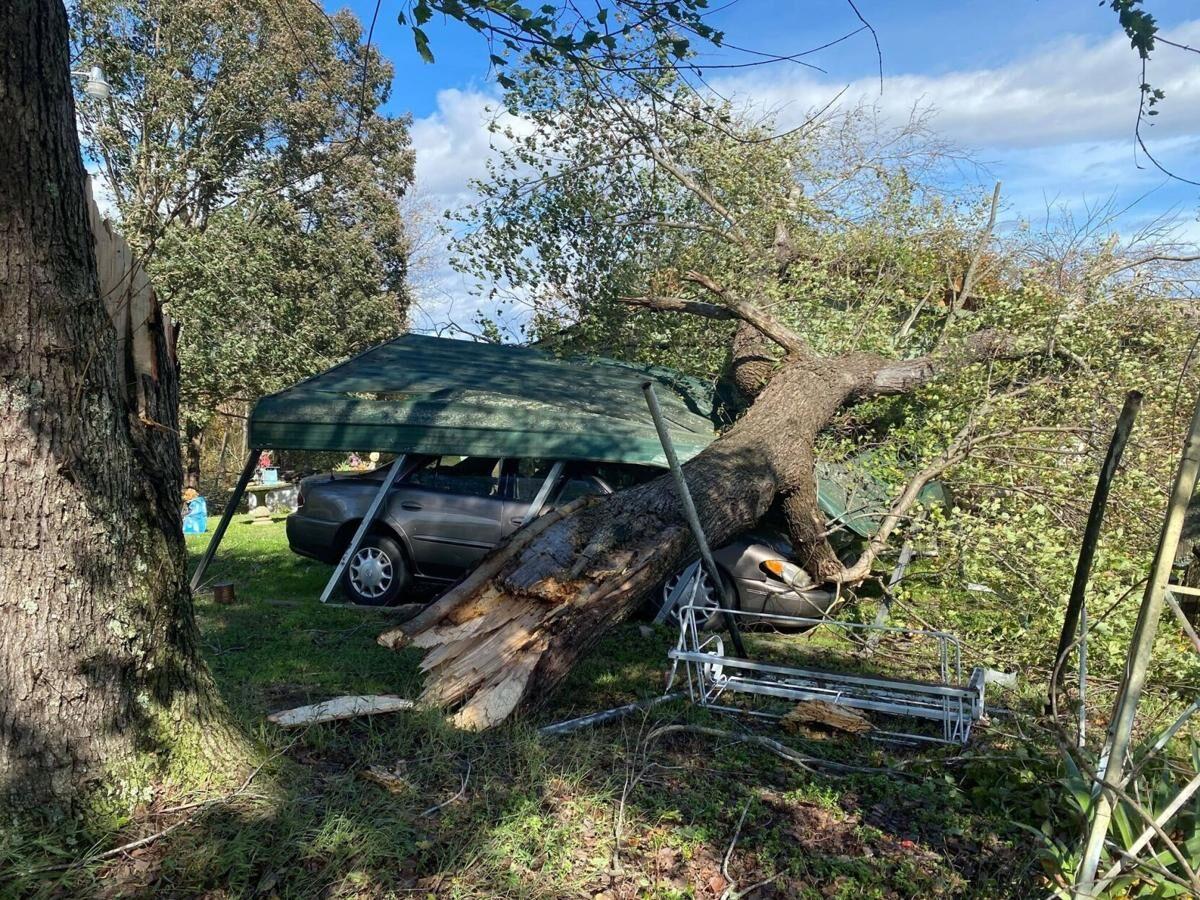 Fallen trees could be found around Burke County after Tropical Storm Zeta barreled through the county in October. 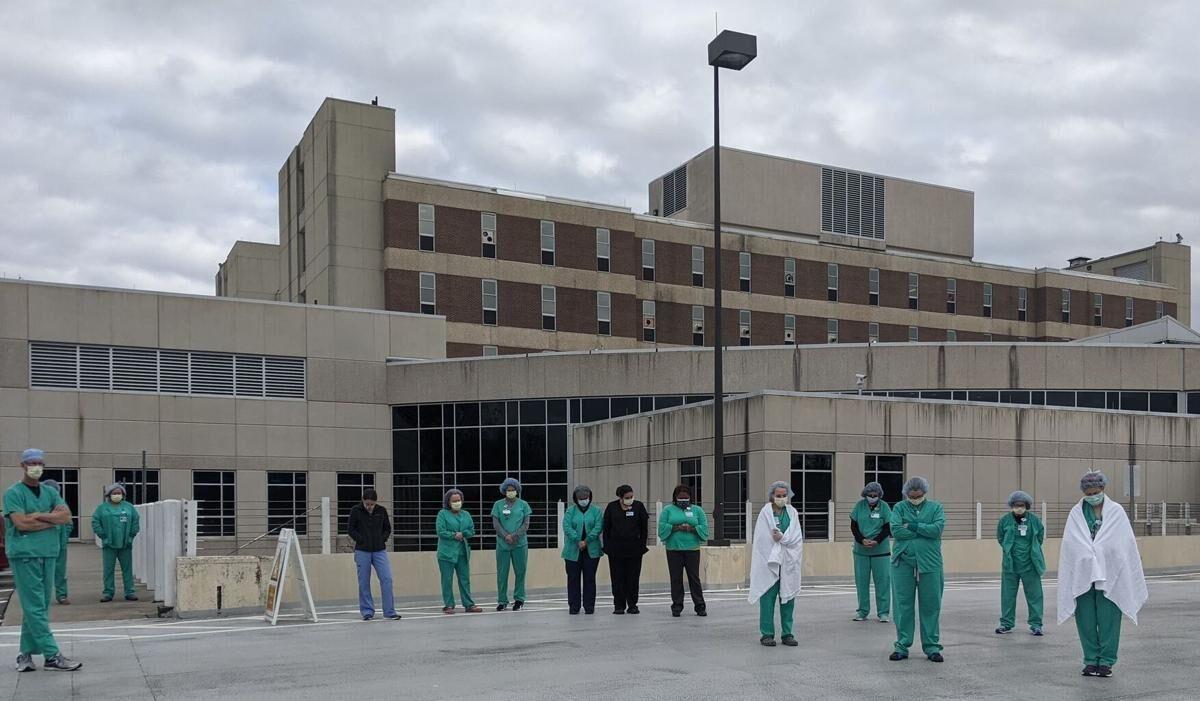 Jamie Sisk spoke to The News Herald from her hospital room after recovering from the coronavirus. 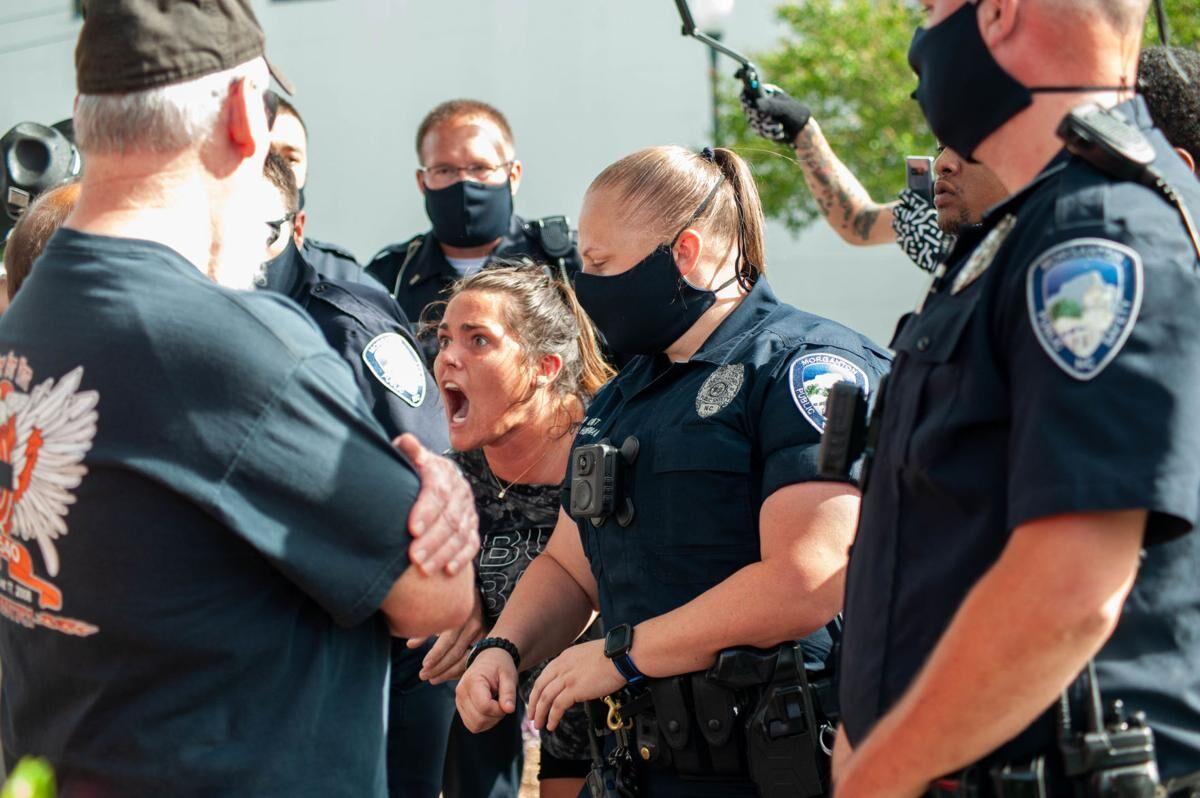 Police hold the line between two groups of protestors in downtown Morganton on June 27.

It’s doubtful there is a soul on earth who won’t be glad to see 2020 come to a close.

This year has taken a toll on everyone, primarily thanks to a pandemic that swept across the globe, devastating lives, businesses and economies and forcing schools closed.

The impact from COVID-19 has been astounding, whether it was forcing parents to become teachers overnight, making a company scramble to get all the needed technology together so employees could work from home or causing governments to come up with a plan to deal with it as quickly and efficiently as possible.

But the biggest impact has been to the Burke County families of 77 people, so far, whose lives were taken by the pandemic, and all of those in the county who have fought to get well after contracting the virus.

But COVID-19 wasn’t the only thing that negatively impacted lives in 2020.

Adverse weather also had an impact in Burke County this year.

In Burke County, the first case of COVID-19 was reported on March 24, followed closely by a second case. The first cases were due to travel outside of the county.

Before the first case was reported, local officials were planning how they would respond to the threat. Because the virus had entered the state, it was only a matter of time before it made its way to Burke County.

At that point, the state had reported a total of 184 cases of COVID-19. Gov. Roy Cooper had already declared a state of emergency, implementing a stay-at-home order except for those working in essential businesses and he banned mass gatherings and limited restaurants to take out, delivery or drive-thru. It also shut down schools for the remainder of the 2019-20 year and caused students to start the 2020-21 school year at home.

On March 20, officials with the county and its municipalities gathered in Morganton to announce they were declaring a state of emergency ahead of the virus and gave a rundown of what they knew thus far, calling the pandemic “uncharted territory.” A command team made up of health officials, law enforcement, emergency management and county officials was formed to meet regularly and make decisions about how to respond to any threats concerning the virus.

The declared state of emergency set in motion the Burke County Emergency Operations Plan and all mutual-assistance compacts and agreements until the proclamation is rescinded. It also allows local governments to recoup money spent in responding to the emergency, according to officials.

In late March, the state of emergency was amended to direct residents to avoid all outdoor activities considered to be high risk in the county and in the Pisgah National Forest and the Linville Gorge Wilderness Area. The amended declaration also suspended short-term rentals of lodging facilities.

The state of emergency in Burke County remains in place.

On Thursday, Burke County reported a total of 5,731 cases of COVID-19, with at least 1,141 active cases and 16 people hospitalized due to the virus.

On Wednesday, the total number of state cases was nearing half a million, with more than 3,000 hospitalized from the virus and 6,360 people dead.

While Pfizer and Moderna have both been approved for a vaccine for COVID-19, health experts warn the U.S. will be dealing with the pandemic well into 2021.

The death of George Floyd at the hands of police officers in Minneapolis, Minnesota, on May 25 that was caught on video sparked protests in cities across the U.S., and Morganton was no exception. Different groups, including Black Lives Matters protesters and even a group of health care workers, staged several protests and vigils at the old courthouse square in downtown Morganton. While the protest were mostly peaceful, in late June, as racial tension flared across the county, one protest over the Confederate statue on the square saw tensions flare as Black Lives Matters protesters and statue supporters clashed.

With many on both sides heavily armed and heated verbal exchanges began, officers with Morganton Department of Public Safety found themselves in the middle in attempt to keep the protest from turning violent. As the situation escalated, law enforcement from agencies across Burke County were called in to help disperse the protestors and restore calm.

Burke gets in on record hurricane season

COVID-19 wasn’t alone in wreaking havoc on Burke County and the surrounding areas.

The second half of the United States’ 2020 weather was dominated by repeated impacts from a record Atlantic hurricane season in terms of volume of activity, and Burke County was no exception.

That was capped off in mid-November when the remnants of Hurricane Eta — the 28th of a record-breaking 30 named storms this season — dumped as much as 7 inches of rain across the county, part of 74.19 inches of total rainfall measured in Morganton through November, on pace for a new record, according to National Weather Service data.

The highest monthly rainfall amount was in August, when Morganton measured 12.15 inches. That month and seven others were above average this year, including February (8.88 inches), when the county experienced significant flooding issues, along with November (7.8), September, (7.3), October (6.95), April (6.6), May (6.18) and January (4.84). (December totals are not yet available.)

A week before Eta rolled through, Burke felt the brunt of Hurricane Zeta’s heavy rain and wind, which downed trees, scattered debris and left more than 6,000 Duke Energy customers without electricity in the county.

A surprise snowfall to cap off January was the most notable event of a somewhat quiet 2020 portion of the 2019-20 season while the summer was a hot one, including a long streak of 90-degree days during July.

Good news amidst a pandemic

2020 wasn’t really the year for good news. It seemed no matter the day, week or month, the bad news continued.

But there were a few bright spots along the way, including companies who announced they intend to call Burke County home.

Unix Packaging that makes functional beverages, flavored water, alkaline- and vapor-distilled water, carbonated soft drinks, and other specialty beverages such as kombucha, announced in late May that it will move into the former Ice River Springs building on Ceramic Tile Drive in Morganton.

The company, which is based in California, plans to create 226 jobs and invest $19 million in the facility. The Morganton facility will be the company’s third manufacturing, bottling and packaging location.

In early November, Ekornes announced it has plans to expand its facility on Wamsutta Mill Road in Morganton by 100,000 square feet and add 65 jobs. The company said the expansion is expected to happen in two phases, with the first phase expanding capacity by mid-January.

Burke Development Inc. planned to apply for a building reuse grant for the company. The state should announce grant awards in February.

And earlier this month, the state announced it was awarding a $100,000 reuse grant to East Coast Bedding LLC to relocate its South Carolina facility to Hildebran. The company will use the grant on a 377,000-square-foot building located at 104 1st St., NW, Hildebran.

Alan Wood, president and CEO of BDI, said the company plans to release more information about its plans for the Hildebran facility around the first part of 2021.

The company makes all types of bedding, including comforters, mattress toppers, sleep pillows and throw pillows, according to East Coast Bedding’s website.

And in early September, local governments who are partners in Burke Business Park on Kathy Road broke ground for a 500,000-gallon water tank at the site. The water tank was needed for fire suppression by any companies who locate in the park.

Costs for the project are estimated to be around $2.3 million, with the majority being funded by a grant from North Carolina's Infrastructure Development Fund and 25% matching funds from business park partners. Those partners are Burke County, the city of Morganton and the towns of Valdese, Rutherford College and Drexel.

The partners have owned the 83-acre site since the early 2000s. Officials say the addition of the water tank is the last piece of the puzzle needed to attract new or expanding businesses to the site.

2020 IN REVIEW: Looking back at a whirlwind year

It's doubtful that anyone will escape 2020 without some sort of lasting memory of the year.

A woman marches across South Sterling Street during a Black Lives Matter protest in downtown Morganton on June 3.

Lola Gantt, 92, was honored as a COVID-19 survivor after an outbreak struck Grace Ridge Health & Rehabilitation Center. The drive-thru event allowed family members to send wishes to family members who overcame the virus.

The Catawba River swelled and covered parts of the greenway in Morganton after heavy rains from a tropical storm fell across Burke County in November.

Fallen trees could be found around Burke County after Tropical Storm Zeta barreled through the county in October.

Jamie Sisk spoke to The News Herald from her hospital room after recovering from the coronavirus.

Police hold the line between two groups of protestors in downtown Morganton on June 27.