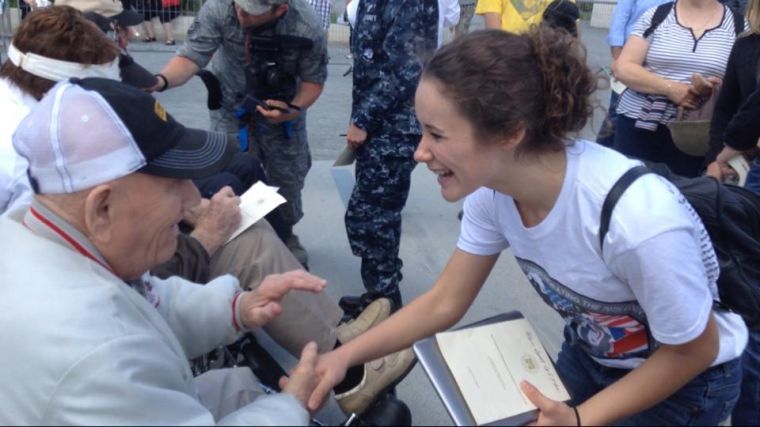 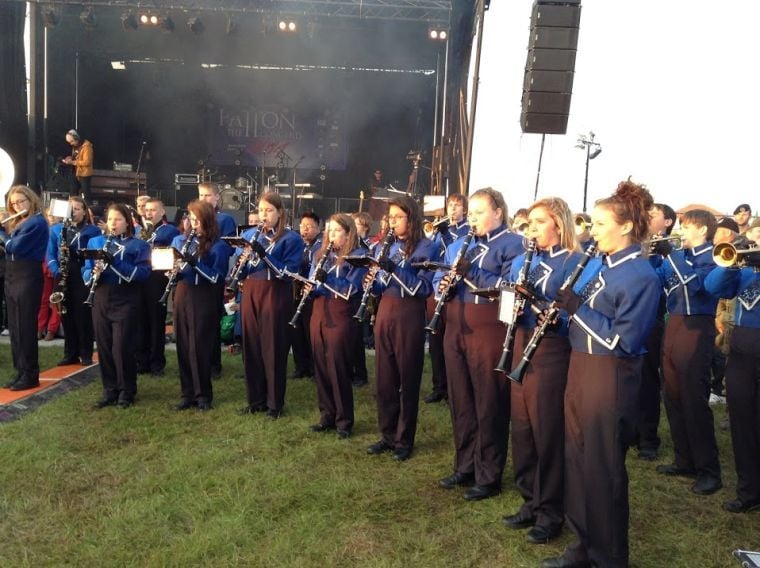 East Burke Band members performed for as many as 10,000 people in Normandy during the George S. Patton Foundation concert. 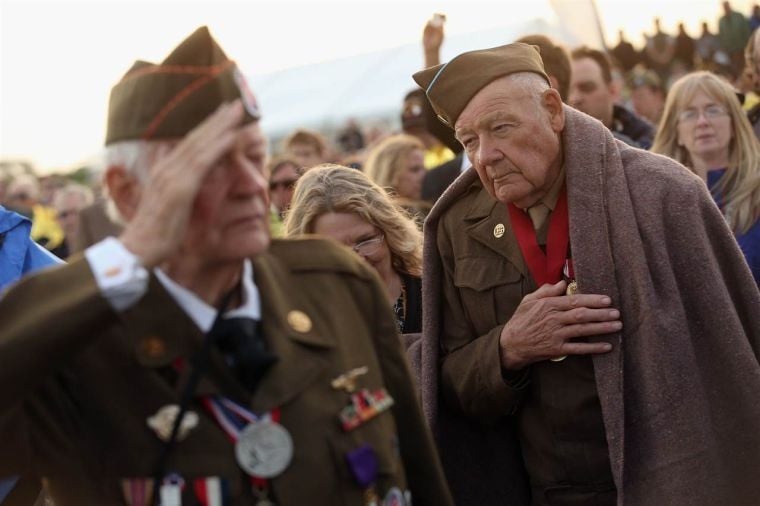 CONNELLY SPRINGS – Although they were nowhere near Burke County, East Burke Band’s life-changing trip to France seemed to truly hit home for the students.

The band members honored the 70th anniversary of the World War II D-Day invasion and Battle of Normandy with the presence of their music, prayers and simple thank yous to those who have served in the military.

The 60 students, five alumni and 33 parents arrived back from their travels Tuesday.

“It was the things on the trip that weren’t planned that ended up being the most memorable,” he said. “The people of France were so happy we were there – that a group of teenagers from North Carolina were there and came to be a part of their celebration.

“They welcomed the kids with open arms. They were little heroes when we were over there.”

The band members experienced all kinds of emotions during the trip’s events, Berry said.

“Many students showed both laughter and tears,” he said. “They didn’t realize what 9,000 gravesites look like until you’re standing there amongst them.

“The longer we stayed, the more emotional the trip got. They were very excited and happy to be there, but the reality of what had happened there really hit home to them when we started visiting the cemeteries.”

Berry said the students were able to meet many veterans and influential people, such as the granddaughters of George S. Patton and Gen. Dwight D. Eisenhower.

Berry said he kept in close contact with Helen Patton, who helped schedule all of the events.

“(The events) were all really well-done and hugely attended,” he said. “She fed us and kept us busy. That was something that no other band over there got to do.”

The band marched through as many as 250,000 people in the parade in the Sainte Mere Eglise commune.

“All these people wanted to do was touch the kids and hug them and thank them,” he said. “It was a real gratifying experience for them. It was something to be a part of, and I’m sure they’ll never forget it.”

After Susan Eisenhower’s speech at Utah Beach on June 7, Berry said she was introduced to James Hamby, the World War II U.S. Army Veteran from Lenoir who accompanied the band on the trip.

“She shared a little bit of unpublished history with our senior class,” he said. “She got all of the seniors together and shared a story with them that evidently isn’t in the history books anywhere.”

Berry said the trip was also one-of-a-kind for Hamby, who made the national televised news on June 6.

“He was as much a celebrity (there) as anybody,” he said. “Any time he would sit down or stop for any period of time, there would be 75 to 100 people around wanting an autograph, a picture, wanting to talk, wanting a hug or a kiss on the cheek.

“If he wanted to be told thank you, he got that in so many different ways by so many people. Everywhere he went and every other veteran that was there in uniform had so many people around them just telling them thank you. It was very moving.”

The students were opened up to a different world in France, Berry said.

“We are from a very small place around here; we’re very shielded and protected,” he said. “A lot of them would (now) like to study abroad. They’ve been made aware that the world is a much bigger place than it was when we left.

“We learned so many life lessons, and they found out for a short period of time that they could survive on their own 3,000 miles from home. There’s a big world out there, and if you never travel outside of our county borders, you never get to see it.”

Adkins’ said one of her favorite memories occurred when the group was at Pointe du Hoc, a cliff overlooking the English Channel, where the band was expected to musically entertain the crowd outside after the commemoration. To her surprise, Adkins had herself a new 92-year-old swing dancing partner.

“Some of the kids in the band had been working on swing dancing,” she said. “One of the veterans stood up out of his wheelchair (to dance), and I ran over and danced with him. It made me want to cry and laugh all at the same time. That’s what those men have done – rise out of situations that maybe were uncomfortable.

“I talked to him after the ceremony was over and got his autograph. He told me to sit on his lap and gave me a kiss on the cheek. That really hit home. It was just so sweet.”

Adkins said another veteran also started moving to their swing music and turned out to be a talented dancer.

“He was a World War II veteran and he started dancing and bouncing off the walls to our swing music,” she said. “It was so neat to see. These men laugh and have a good time just like we do, but the contrast of what they’ve been through is so much greater than anything I have.”

How the band members were received by the people of France was touching, Adkins said.

“After every performance, people would come up to us and say, ‘Wow! That was great. Thank you so much for being here,’” she said. “It was so humbling that they appreciated us being there playing for them.”

Out of the band members on the trip, nine seniors got the chance to graduate at the Normandy American Cemetery and Memorial overlooking Omaha Beach, one of the landing beaches of the Normandy Invasion.

Adkins said when she first learned that she would be graduating in France, she wasn’t completely thrilled.

“I was so upset,” she said. “I thought my mom won’t get to see me graduate. (But), my perspective has totally changed on graduation. It’s such a milestone in every high school student’s life, but I didn’t take the time to really think about what got me to that point and who laid down their opportunity so that I could take that step.”

Graduating in Normandy made her reflect a lot on her life overall, Adkins said.

Getting the chance to hear Susan Eisenhower speak was something special, Adkins said.

“I was completely shocked,” she said. “I didn’t think I’d get to see anyone who is so well-known. I thought it was so neat that she had a special story to go along with the cemetery at Omaha Beach.”

Adkins said the students who went on the trip formed a special bond.

“It affected us as a group,” she said. “Whenever we saw the veterans, we’d all come together and say, ‘Hey, did you see that?’ A lot of the girls had tears in their eyes. I’m so glad I went with other people that could appreciate it with me and who I could talk about it with.”

Band members were able to use their talent and love for music as a way to honor the veterans, Adkins said.

“Everything in band (throughout the year) was working toward our success,” she said. “(But) this was about honoring something completely separate from us, honoring the real heroes, who did (what they did) without realizing how many people they’d end up touching in the future.

“It definitely had more impact because I’ve always loved band and I love music, but this is about using music to honor others, (to) put others on a pedestal besides ourselves. I’m so thankful I was one of the people that could go up (to them) and say thank you for your service and your sacrifices and give back what I could through music.”

The trip to France helped her learn many eye-opening and unexplainable life lessons, Adkins said, and brought on all sorts of different emotions.

“I wanted to cry and laugh and praise God for all the men who did that for us,” she said. “I appreciate it so much, but it just makes your heart hurt. It really hit home. Every sacrifice each person in the military made was completely different, but they were all the same in that they gave something up.

“I think I’ve learned that everyday is veteran’s day,” she said. “We spend one or two days a year honoring our soldiers, (but) it’s not something you can honor in one day. I definitely now see them differently, and understand how small it is for one person to say ‘thank you.’”

Adkins said her experience in France was something she could never be taught in school.

“I’m so glad I got the opportunity to go and see it instead of read about it,” she said. “You can’t really teach it without having an experience with it. Some things you can’t learn through books.

“I hesitated before this trip. I was like, ‘Oh, France? That’s so far away.’ But, wow! I’d go again in a heartbeat. It was the best week of my life.”

Another COVID-19 death reported in Burke

COVID-19 has claimed another life in Burke County.

Thanks to a $1.5 million grant from the Golden LEAF Foundation, Western Piedmont Community College is planning to build a 30,000-square-foot Construction Trades Solution Center on the campus.

East Burke Band members performed for as many as 10,000 people in Normandy during the George S. Patton Foundation concert.