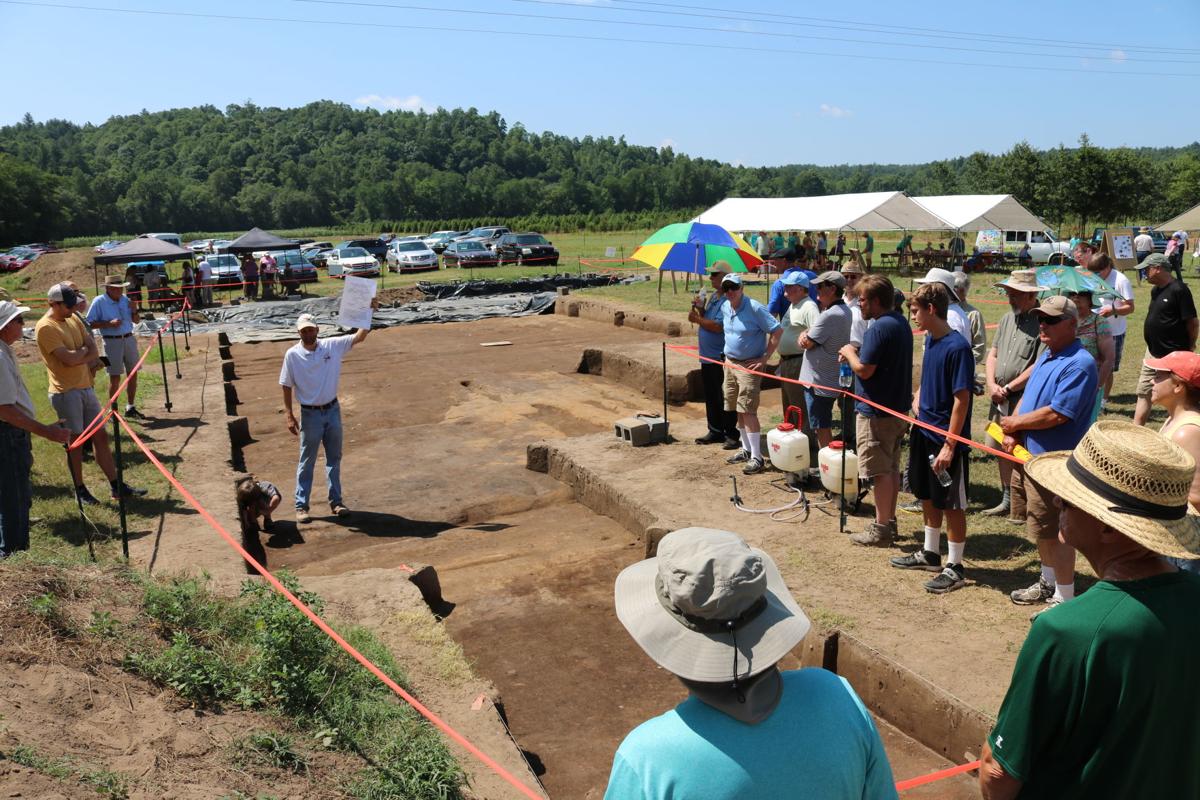 Participants in a past field day at the Berry Site in Morganton listen to a presentation. 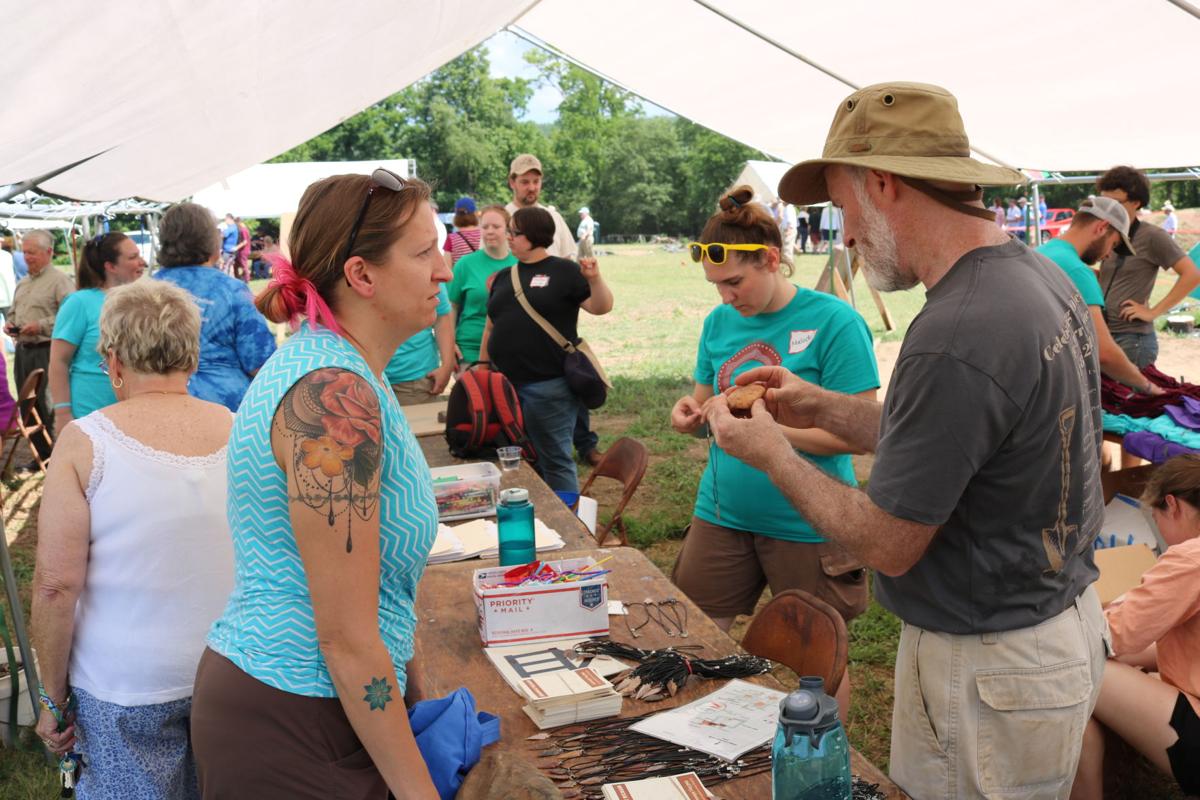 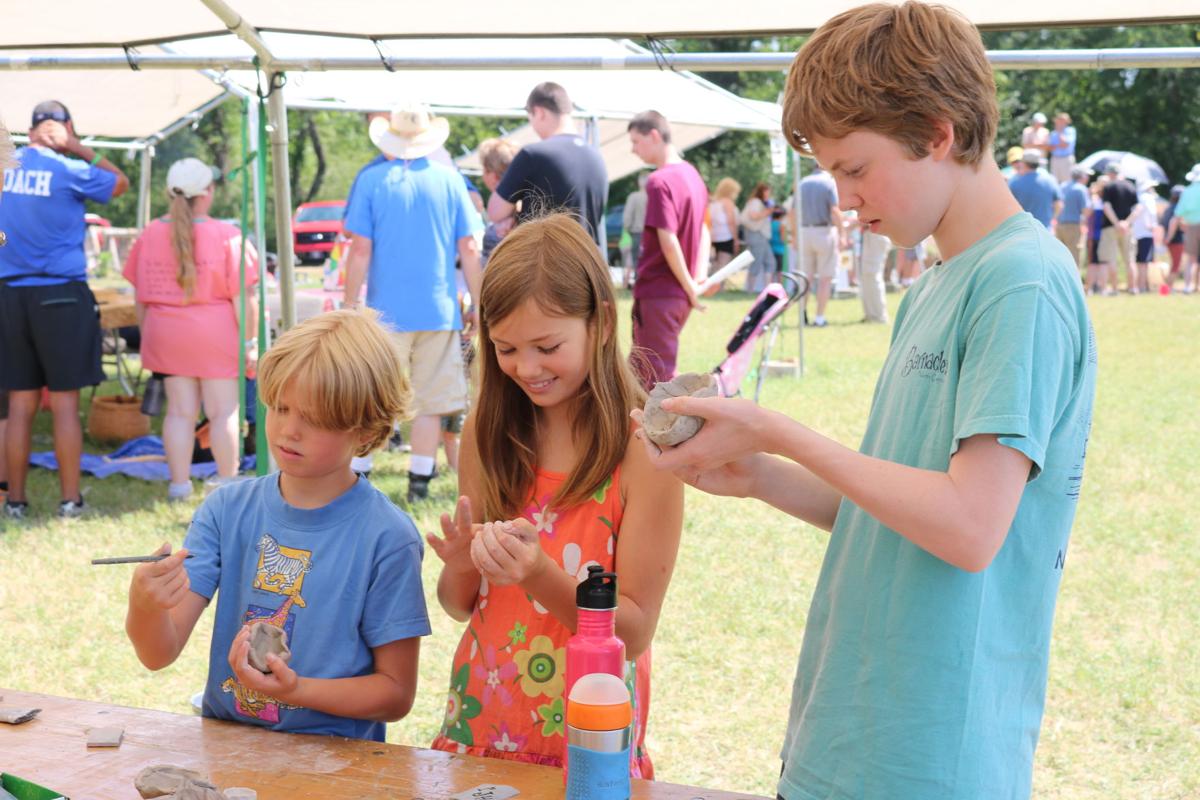 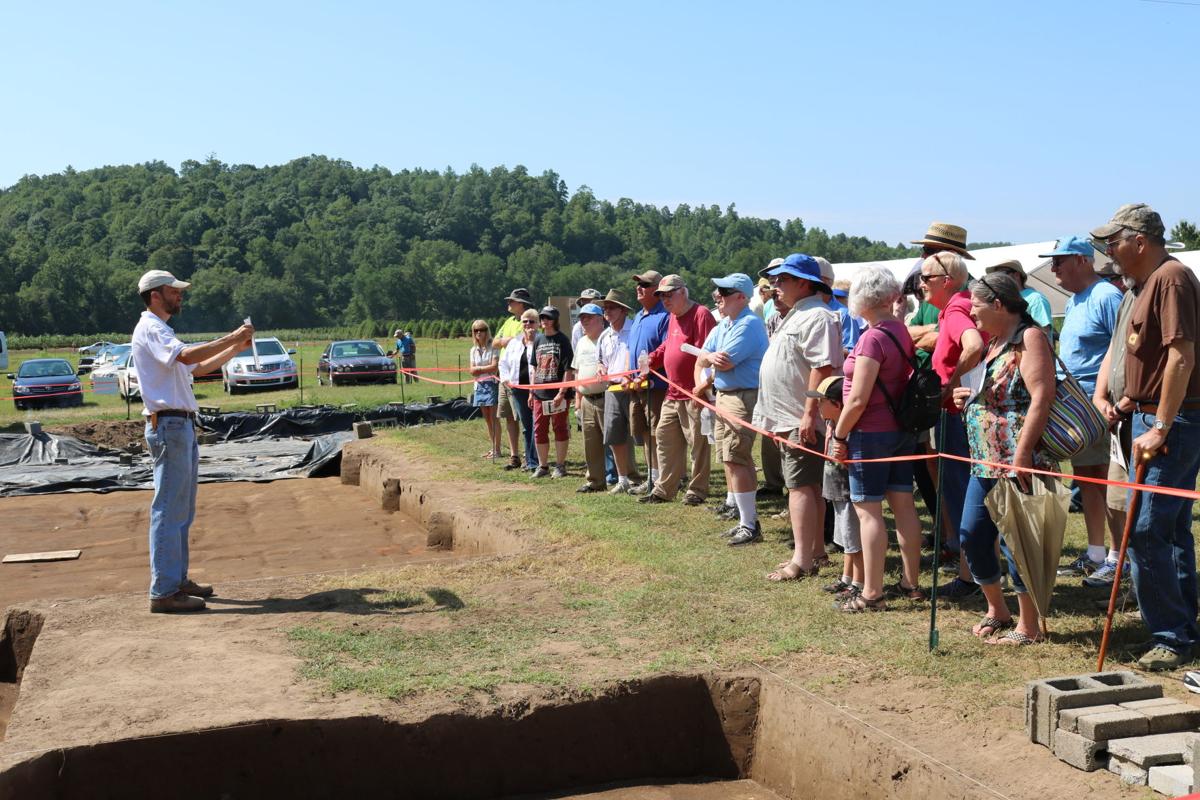 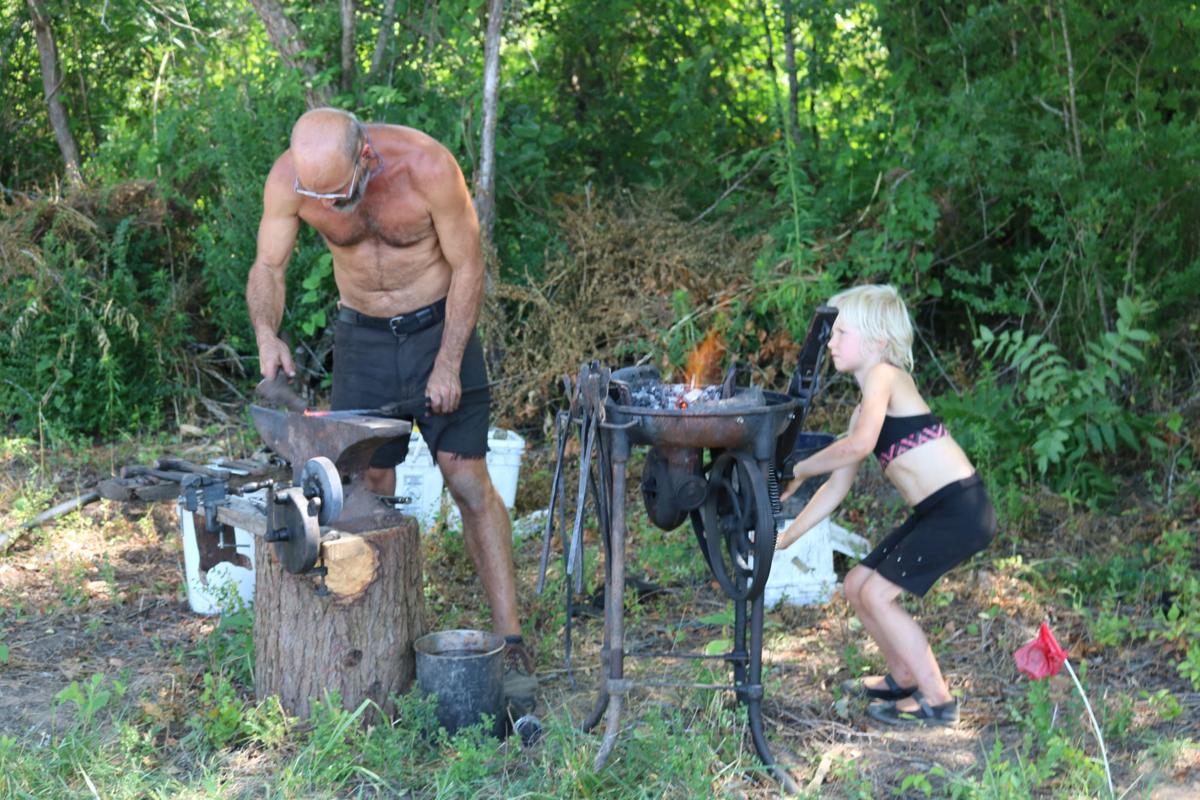 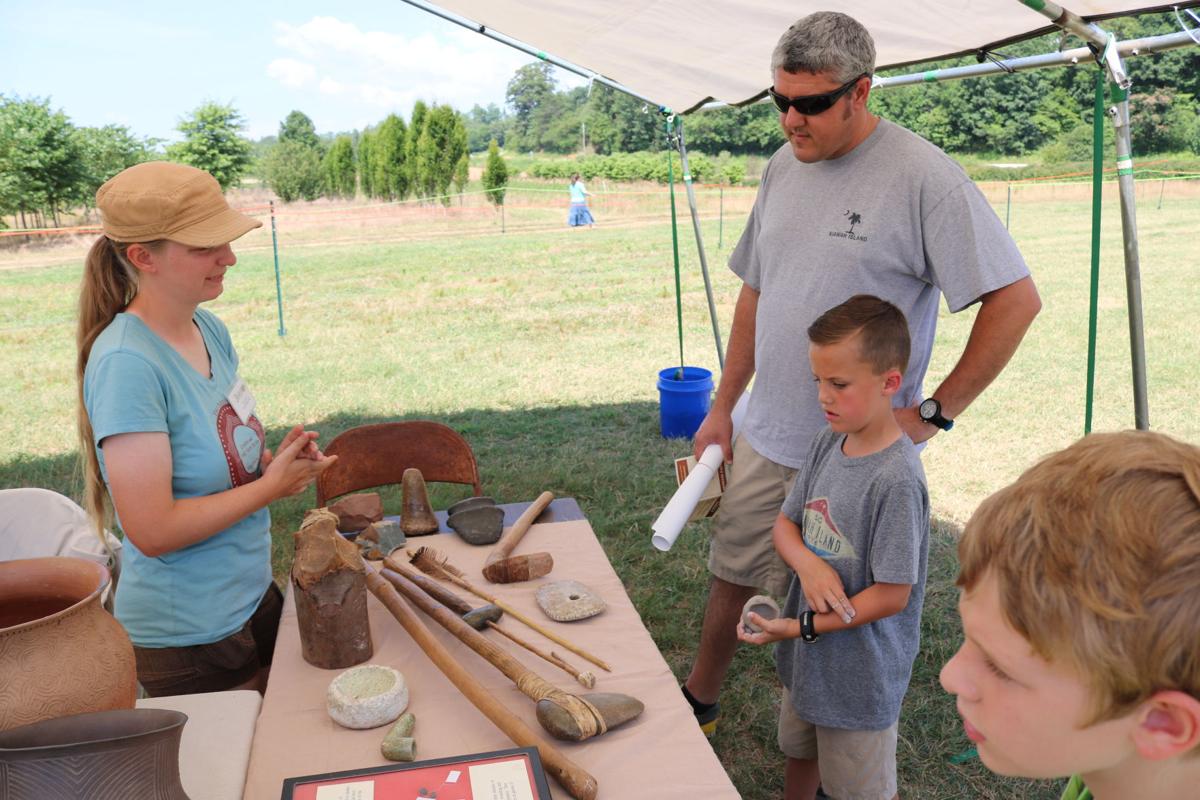 The Exploring Joara Foundation hosted hundreds of visitors to the Berry Site and Fort San Juan during their 16th Annual Field Day in Morganton on June 25.

Visitors were able to take tours of the excavation site led by three of the lead archaeologists including Dr. David Moore with Warren Wilson College, Dr. Christopher B. Rodning from Tulane University and Dr. Robin A. Beck from the University of Oklahoma.

Participants immersed themselves in primitive skills demonstrations such as fire by friction, black-smithing, blow guns, atlatls, hide tanning and pottery making that Native American and Spanish explorers would have used in the 16th century.

Tours were given by the lead archeologists about the research they have found and analyzed from the beginning of the excavations to the present.

“In 1987, it was very clear that there was a very large 16th century population here,” Moore said.

Approximately 30 years ago, Moore was persuaded to conduct his dissertation for his Ph.D. at the Berry Site and other sites in surrounding counties.

The Spanish documents that researchers were working with had evidence that the armies came through the Catawba Valley, he said.

“I went through all the state records for the sites in the Catawba Valley and I picked three sites (including the Berry Site),” Moore said. “Three of the best known sites where the property owners would let me work.”

Over the next 10 to 15 years, Moore continued to work at the state archeology office and studying the material and writing his dissertation.

Beck, who Moore has know since he was a young teenager, was actually related to the property owners of the now Berry Site.

“It was his aunt and uncle that owned this property and he had been collecting artifacts for his whole life,” Moore said.

Beck and Moore took each of their artifacts down to Parris Island in South Carolina where the sister fort to Fort San Juan called “Santa Elena” was uncovered. It was there that their artifacts were confirmed to be from the 16th Century, Moore said.

Since 1994, Beck and Moore have been collaborating together and Rodning joined in 1999, he said.

Rodning hosted the first field day tour on Saturday explaining the importance of their findings and what they believe took place at the site many centuries ago, especially the years between 1566 and 1568 when Spanish conquistador Juan Pardo came through in his expedition.

“The overarching interest in our research project was the nature of interaction, periodic conflict and periods of alliance and cooperation between the Native Americans and the Spanish colonists who were here,” Rodning said.

“There are only brief accounts of the nature of the interactions between the Spanish soldiers who were stationed here and the Native American host community of Joara,” Rodning said. “That is where the archaeology becomes very important.”

Modern archaeology has been present at the Berry site for 30 years, Rodning said.

“This site is one of the most important archaeological sites in the United States,” he said. “What we are learning about the interaction between Native Americans and early European explorers and colonists, has major implications not only for understanding European colonial history in the Americas, but understanding the arc of world history from the 16th Century and on.”

He led the tour group to a portion of the 12-acre site that is currently being excavated and believed to possibly be the entrance of the fort.

“We know from artifacts that we have found from this particular site … that have Native Americans have in fact lived in this floodplain for thousands of years, Rodning said.

They use many modern excavation instruments such as soil resistivity meters, ground penetrating radars and proton magnetometers to get a sense of what is underneath the surface of the ground by sending electric signals under the ground and detect what bounces back, he said.

“Most of what we find represents the Native American town of Joara dating roughly A.D. 1400 to 1600,” Rodning said. “The archaeology that we are doing here focuses mostly on the period between 1400 and 1600 and more specifically between 1566 and 1568.”

In that time, the population of Native Americans living here may have been as large as 500, Rodning said.

The excavation process could go on for decades more and researchers hope to pass down the project to the next generation.

“Every year we gain new information and the story becomes more complete,” said Moore. “What we have to do is help the public understand that this is an incredible opportunity to learn that the complexity of the 16th Century.”

There is more to it than the stories we have heard about the English arriving on the coast and settling the American Frontier, he said.

“It is really important to realize that these are events that we still deal with the repercussions of them today,” Moore said.

Globalization and immigration are red hot issues in today’s society, he said.

“What we hope is that this story here can help people understand that a single event or a series of small events can make a huge impact on the people of that moment, the people of a generation later, people a hundred years later and on into the future,” Moore said.

There are other places in the western piedmont that they would like to begin other projects, he said.

“This story is incomplete and we want to fill it as much as we can,” Moore said. “It has been an amazing thirty year journey for me and I have been privileged to work with two of the best archaeologists in North America.”

Each lead researcher is very excited about where the excavations will lead and are appreciate of all the help that they have received.

“We are very pleased that the Exploring Joara Foundation does so much to support public participation in events related to the archaeology here,” Rodning said.

The three lead archaeologists have recently published a book titled “Fort San Juan and the Limits of the Empire: Colonialism and Household Practice at the Berry Site” that can be purchased at www.amazon.com.

For more information about the Berry Site, visit www.exploringjoara.org or call 828-439-2463.

Watch Now: Biden wants to raise taxes on the wealthy

Watch Now: Biden wants to raise taxes on the wealthy

Watch Now: How much will space travel cost?

Watch Now: How much will space travel cost?

Participants in a past field day at the Berry Site in Morganton listen to a presentation.