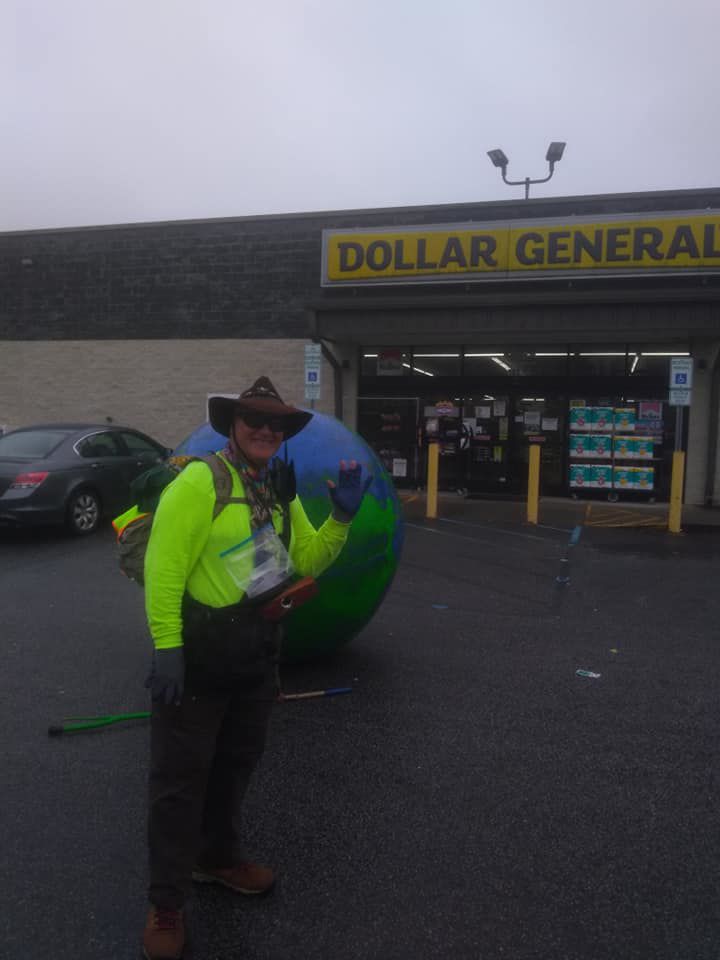 Bendl poses in front of Dollar General in Glen Alpine. 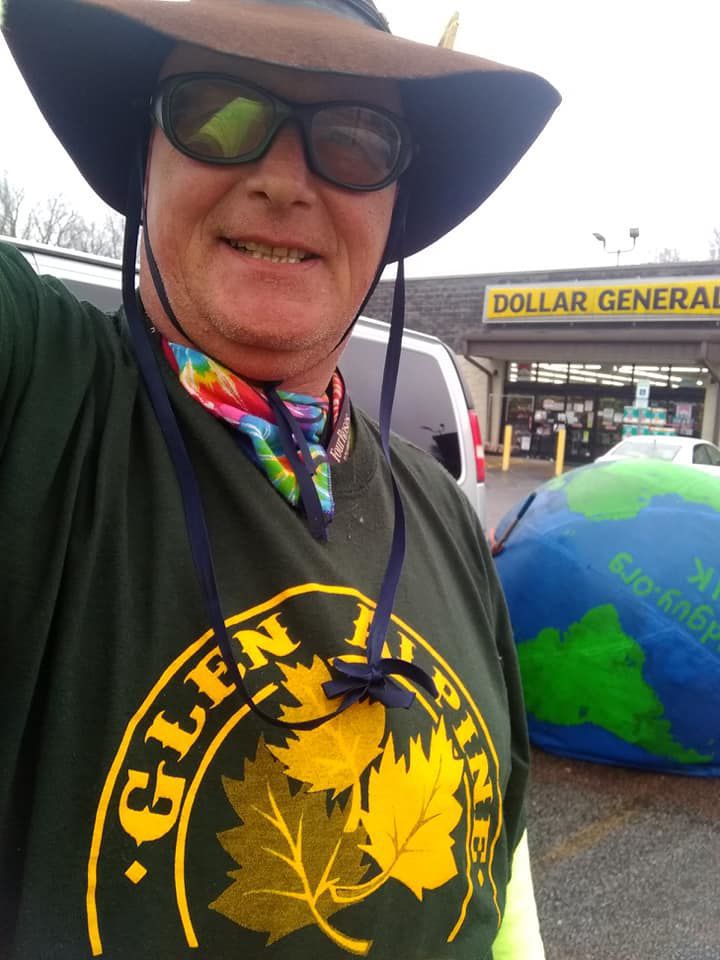 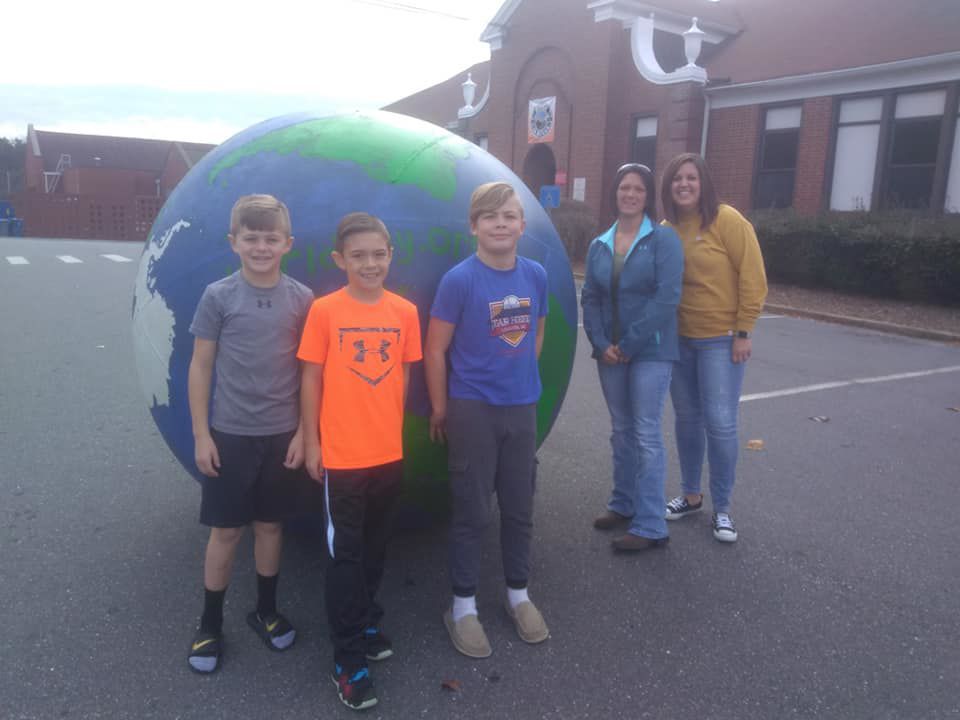 Folks pose for a photo with Bendl's globe ball. 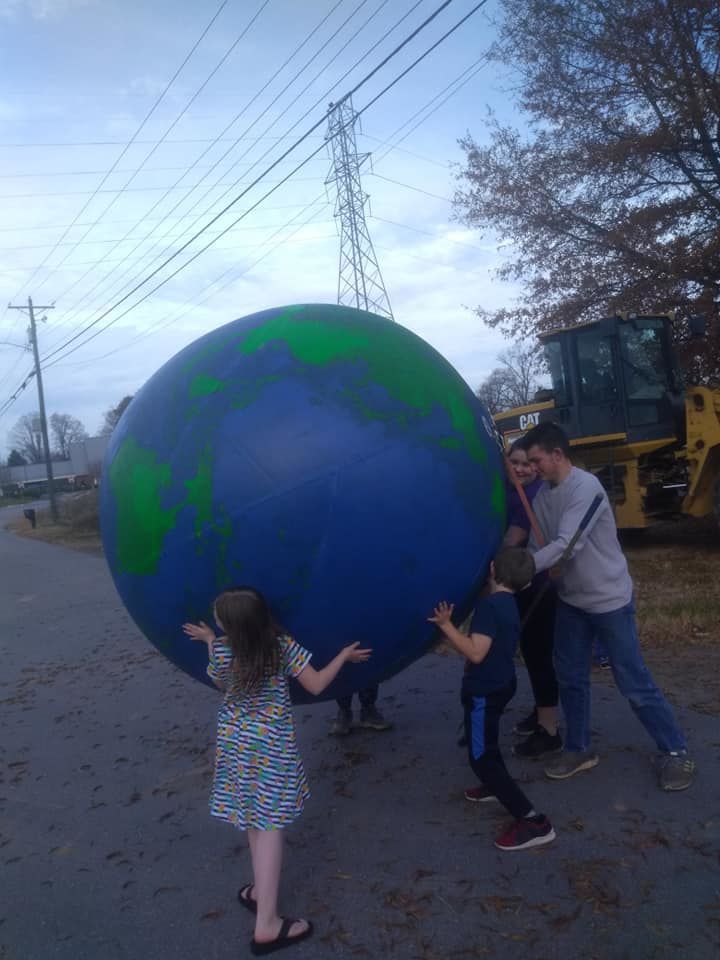 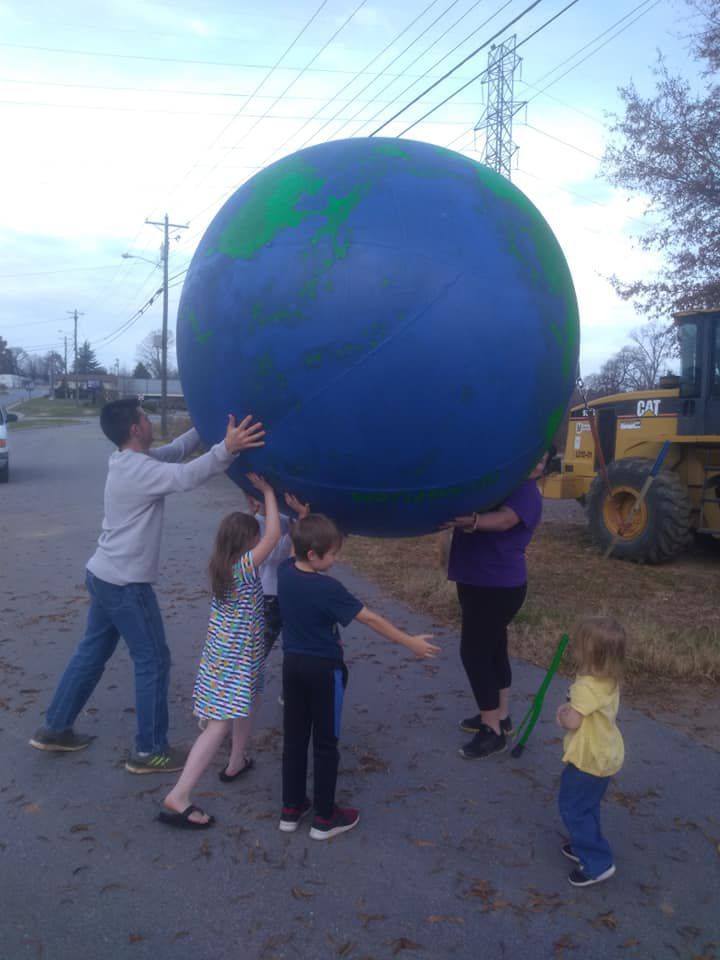 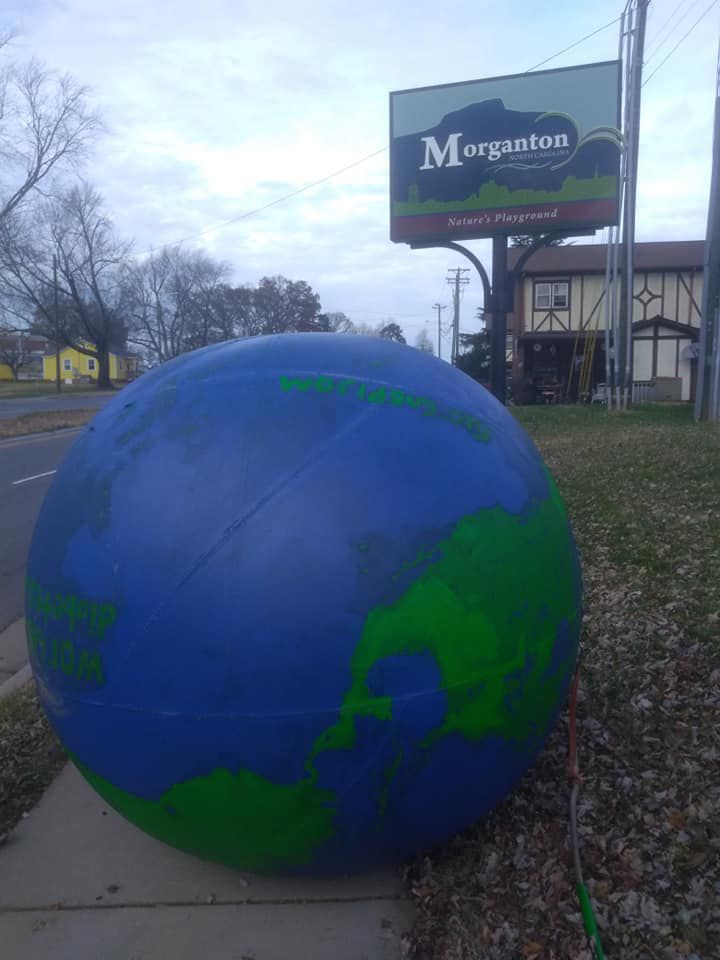 Bendl commemorates his entrance into Morganton. 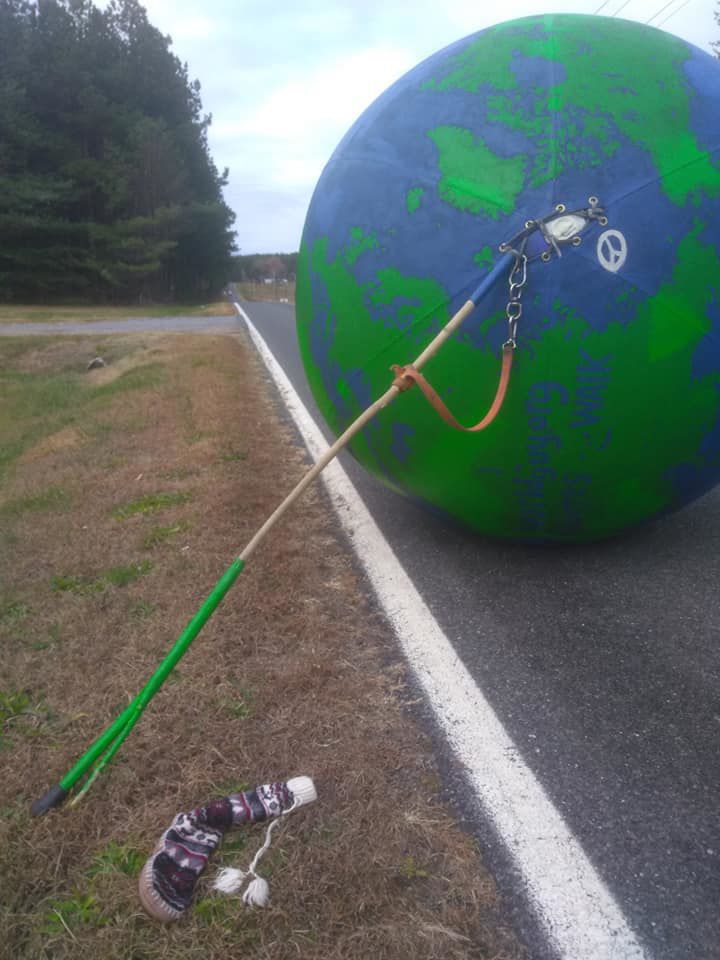 The stick Bendl rigged to his ball helps him to steer the ball out of harm's way. 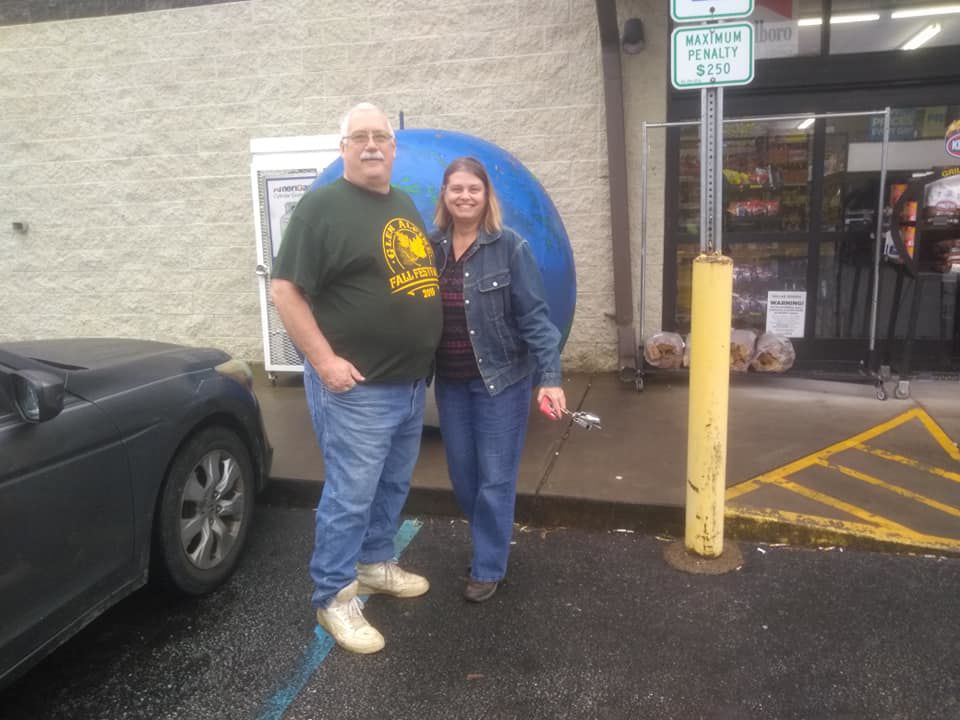 The man who gifted Bendl his shirt poses in front of the Dollar General in Glen Alpine.

Kentucky resident Erik Bendl created quite a buzz around Burke County throughout the week of Thanksgiving, as many people stopped to take a photo with the man they spotted walking with a 6-foot-tall globe ball along the side of the road.

Bendl reached his final destination — the Dollar General in Glen Alpine — on the morning of Dec. 1. He first set out for the 250-mile trip from Myrtle Beach on Nov. 2-3, and walked nearly 10 miles a day. Near the end of the trip, he walked closer to 15 miles per day on average, he said.

It seems that Bendl has that effect on towns nearly everywhere he goes, and he’s traveled to many places: “One way or another, I’ve stepped foot in all of the Lower 48 (states).”

Bendl has performed 19 or 20 walks, and he has walked more than 7,000 miles in total. The more he walks, the more the Kentucky resident’s nickname, “World Guy,” is an apt one.

“I’m walking for diabetes awareness,” Bendl said. “I’m trying to spread a little message that if we walk a little every day, we can keep healthy and prevent, control or turn diabetes around. Generally, walking is good for many things, but I can only latch on to one debilitating disease at a time. My mother passed away at the age of 54 from diabetes. Her brother, my uncle, is 93 and he is Type 1 diabetic. So, I use them as an example to take care of yourself and be there for your grandchildren.”

Bendl’s mother, Gerta Bendl, served as a state representative in Kentucky from 1976 until her death in 1987. He first had the idea to walk for diabetes awareness when a newspaper reporter interviewed him after his mother’s death as part of a column in remembrance of Gerta. The reporter asked him if he had any interest in walking for a cause and helped him get in touch with the American Diabetes Association, an organization that he still donates to today, Bendl said.

Throughout the years, Bendl certainly has accomplished his goal of raising awareness for diabetes.

“People’s reactions are always positive,” he said. “A lot of times people say that I’m their reminder (to walk.) Others that I’ve never even met have messaged me and said that they heard what I was doing, and got inspired and made a change in their life and their A1C (a test that measures blood sugar) down, or that they have moved from shots to pills.

“I’m amazed at the people that do get a hold of me. The influence that I’ve had, it’s really touching. It’s good for me too. I need the exercise — I’m not a small man. Being a carpenter my whole life, now that I’m old, I need to stay active.”

Bendl first had the idea to walk to Burke County after a previous trip to Asheville led him to Glen Alpine after he had a week of time to kill.

“I didn’t really think I’d ever see Glen Alpine again,” he said. “But then this fall, when I was trying to decide on where I should walk to inside of a month’s time, I needed a place that wasn’t too hot or too cold — somewhere that was kind of right in the groove.”

The weather conditions are important. As it gets warm during the day, he has to take pressure off the globe ball when it expands due to the heat. As it cools off in the afternoon, he uses a Coleman air mattress battery that he keeps in his backpack, he said.

“I actually had to put the world (ball) up because it was still wet,” he said. “On (Nov. 30) the rain came hard and fast, and the ball was so wet. Now, I’ve got the world back out and airing it out in the basement where she’s recuperating. I might even do some touch-up painting on it, if it gets good and dry.”

Bendl said he is fortunate that he has not experienced any major setbacks during his travels, other than a torn Achilles tendon during one walk. This experience helped him to “walk slower, with less impact.”

He has even attached a steering mechanism to the ball to help guide it along, he said.

“I have attached a toggle with a splitter link on the end of a stick that has maybe a 2-foot leash on it,” he said. “That way, I can steer it from the side or from the rear.”

The closest thing to a setback for him on the trip to Burke County was when a group of cows took a serious liking to his globe ball, for whatever reason. In his experiences, horses generally get anxious when they see the ball approaching. Cows, on the other hand, have had the opposite reaction.

When asked if he has started to plan out his next walk, Bendl said he hasn’t thought about it yet. For now, he’s enjoying time with his girlfriend, Mary, who he hadn’t seen in more than a month.

He has many lasting memories from his encounters in Burke County, though, and quite a few new friends.

With his Facebook approaching the maximum allotment of 5,000 friends, Bendl is unable to add many people who send him requests.

“My brother (who in the past ran his blog/website) is the techie,” Bendl said. “I’m just a carpenter that rolls a ball down a hill.”

Despite the large numbers of folks he meets in his travels, Bendl views each encounter as special, he said.

“I need somebody to write down my stories,” he said. “A lot of times, I’ll have 50, 60 or 100 conversations during the day and I would have a lot to say about many of those little vignettes and moments with people if I could just write it down before I pass out and fall asleep.”

Bendl’s Facebook page is full of Burke County residents who stopped to chat and take pictures with him.

“The people were all great,” he said. “I mean, all the way through it was amazing. It’s always good people. The scenery is great, the people are great. I really can’t say much more.

“Even in New Jersey, there are good people,” he joked.

Burke County reported 47 new cases on Friday, one of its highest day totals of COVID-19 since the virus first took hold in the area.

History of the High Rise

Western Youth Institution is a 16-story building, known across the state as the High Rise Prison. It is the tallest building in a large swath …

Could you hear the implosion?

Last month, the North Carolina School of Science and Mathematics received the news that it had been waiting to hear for more than a year, as G…

Bendl poses in front of Dollar General in Glen Alpine.

Folks pose for a photo with Bendl's globe ball.

Bendl commemorates his entrance into Morganton.

The stick Bendl rigged to his ball helps him to steer the ball out of harm's way.

The man who gifted Bendl his shirt poses in front of the Dollar General in Glen Alpine.