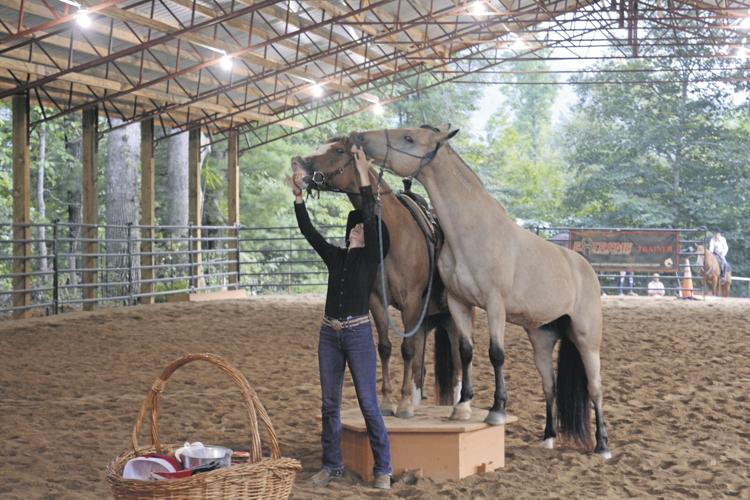 Valeria Escudero makes her horses smile during the Mustang Mixer spin-off on Tuesday. 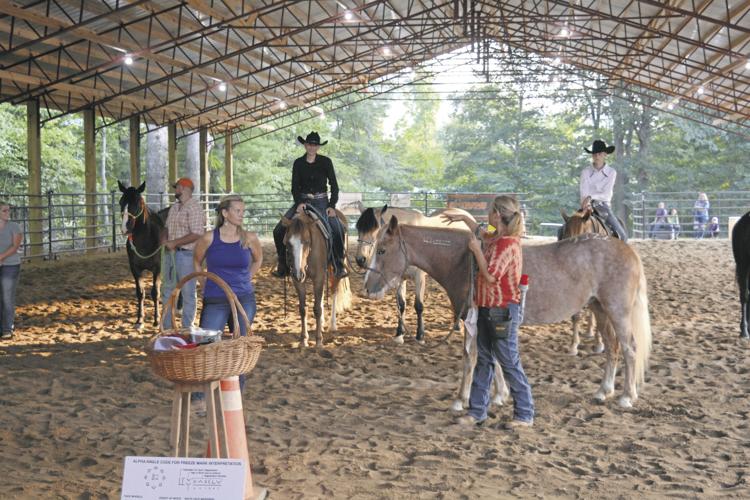 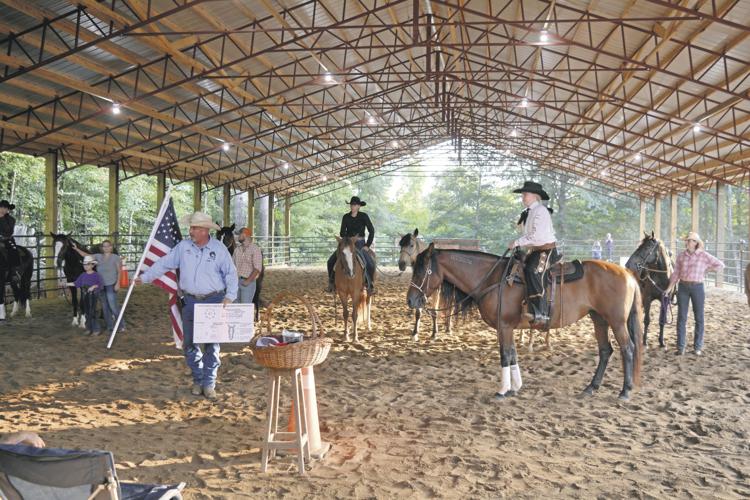 Lamb Farm held a spin-off of its Mustang Mixer on Tuesday night.

American Mustang horses are known to be wild animals, but local horse enthusiasts showed just how gentle and calming they actually can be during a Mustang Mixer spinoff event at LambFarm Horses on Tuesday night.

“(Mustangs) have no anger, they have no agendas, they have no resentment,” James Lamb, owner of LambFarm Horses, said. “They are what you are. They mirror your soul.”

Lamb hosted a mustang showcase at his farm, presenting mustangs to a local group for a night of fun and entertainment, while also potentially finding adopters for his horses.

Lamb works with the Bureau of Land Management, a government agency that rounds up and contains wild horses, and the nonprofit Mustang Heritage Foundation, which works with the government to help find the mustangs homes.

“I take a wild horse and gentle (or train) it so someone then can take it home and either continue the training themselves, or they can ask me to continue to train it,” Lamb said. “I’m the ambassador to help more mustangs that don’t go through competition find a good home.”

He called Tuesday’s showcase a “spin-off” of his “mustang mixer” events that he holds at the farm, which aims to find adopters for the mustangs while also encouraging the public to come out and learn more about the horses.

Lamb also works with the Mustang Heritage Foundation’s TIP, or Trainer Incentive Program, which works “to bridge the gap between potential adopters and mustangs housed in BLM off-range corrals.” He has been working with the MHF since 1999 and has been putting on events since 2013.

The Mustang Heritage Foundation puts on various events such as the “Extreme Mustang Makeover,” which started in 2007 and sees trainers compete for cash and prizes. Separately, the TIP challenges, which are all in-hand, are designed to “make (the mustangs) more adoptable and (easier to) handle, for people that don’t have the experience to take on a wild mustang,” horse trainer Richard Hames.

Hames is taking his horse, D’Artagnan – a double reference to a “Stranger Things” character and a “Three Musketeers” character – to a TIP challenge in Georgia on Saturday.

Tuesday’s event, however, was a night of entertainment while watching Wild American Mustangs perform practiced maneuvers to music behind the guidance of their youth trainers.

The night saw something for everyone in attendance. Some of the girls were standing on top of their horses. Another saw her horse perform a half-pass routine to Michael Jackson’s “Beat It.” One girl lassoed a fellow participant in a golf cart. One girl made her horse smile, while one even hitched a sled up to a horse and went for a free ride in the pen.

The first two performers were Beth Allen and Jill Van Horne. Allen is an equine specialist at her company, Successful Strides, which she started as a way to help kids with reading. She wanted to connect her passion for teaching and working with kids, according to a previous News Herald report.

Van Horne is the program director of professional school counseling and assistant professor at Appalachian State University. Allen and Van Horne teamed up to train their horse, “Little Miss Sunshine.”

Allen and Van Horne co-teach a graduate-level class at Appalachian called Equine Assisted Learning and Psychotherapy. Both are certified in a model that uses horses for mental health purposes, Van Horne said.

“Our students are trained in all this theory and practice, but when they actually get in the pen with the horse, they really pay attention, because they’re with a 1,000-pound animal,” Van Horne said. “We don’t know the horse’s intentions.

“It shows us our biases, because we talk about our clients that way. We use horses for metaphors. We’ve had horses where people say, ‘This horse reminds me of my dad, stubborn,’ or ‘my mom, very gentle but larger than life.’ Horses don’t have biases, they don’t have that or carry that and we do. We compartmentalize – we like to categorize people. Horses have really shown us and our students how to be more present when working with clients.”

Next was Hames and his horse “D’Artagnan,” or “Dart” for short, who have only been working together since June when Hames adopted him.

Saturday’s competition in Georgia will mark the first time Hames rides Dart. He has worked with him for “maybe 45 days,” as he holds two full-time jobs. Hames works the night shift at VEKA and works at Drowning Creek Farm, an American Saddlebred show barn in Hildebran.

He has been working with horses for 10 years, and loves it.

“I love the fact that every horse is different,” Hames said. “They have their own personalities, quirks and things that you have to help them work through. But, you have to understand them to help them work through it. It’s kind of like being a therapist but with animals. A lot of it is knowing their body language, how they interact with each other out in the herd and using your body language and that knowledge to interact with them on their level.”

While Dart is his first mustang, Hames has homed rescue horses and domesticated ferals, who are “thrown out in a big wide-open pasture and either animal control or rescue will get involved,” he said. When the BLM was loading up Dart onto the trailer to come home with him, Hames said the BLM trainer cautioned him, “I hope you have good health insurance,” he joked.

He and his partner have nine other horses, two pot belly pigs, two cats and a dog. Hames’ motto on the back of his business card says, “Start where you are, use what you have, do what you know, be the change.”

Jodi Self joked about being the “oldest person (in the event) on the youngest horse.” Self and her horse, Pax, have only been working together since January.

Valeria Escudero, a 16-year-old 11th-grader at Burke Middle College has an understanding of horses that her mother calls “a gift.” Escudero has been working horses since she was the age of 4. She first rode horseback in her native Puerto Rico.

“I fell in love with (mustangs) because they’re the sweetest horses and they’re so versatile,” Escudero said.

She was introduced to the program by her friend, fellow participant Mackenzie Winkleman. Escudero is interested in studying hippotherapy, a therapeutic and rehabilitative form of horseback riding designed for improving coordination, balance and strength, according to the American Hippotherapy Assocation website.

Like Escudero, 14-year-old Lily Drake wants to work with horses professionally. Drake and her mother decided to home school her so that she could spend more time around horses.

“I get up early, do schoolwork for an hour or two and then come here and stay the rest of the day,” Drake said. “I like being able to train them the exact way I want. I’m used to getting on these horses that are trained someone else’s way – to do what they want them to do. With mustangs, I get to train them exactly how I want. They’ve taught me patience.”

Drake has trained her horse, Shawnee, since it came to LambFarm. That experience will be worthwhile for her because she hopes to be a trainer professionally.

Jessica Henson received attention for riding her horse, Gunner, backward. Lamb joked that Gunner is called an “honorary mustang” because “he has had to put up with these guys for so long, we made him one.” Gunner was raised around the other mustangs, though he himself is not one.

Henson has learned a lot about herself from working with Gunner, she said.

“I’ve been trying to train him the best I can. We’ve done a lot of shows together, and he’s taught me a lot about how to ride and control my nerves and emotions.”

Her father says she is now happily married in Tennesee, and owns a horse farm there. The elder Lamb agrees that she has made him “a proud dad.”

Mackenzie Winkleman closed the show with her horse, 11-year-old Judy, from California.

The event was a success for everyone involved. Lamb was happy just to be able to show off the kids and horses.

“These kids do a lot of hard work,” he said. “We do something different here – I don’t train the horses for the kids, I help them. A lot of places you have trainers training the horse and then the kid gets on and rides the horse. Here, it’s a little bit different. We teach the kids to do the training. So, it teaches the kid a lot about themselves. You can’t force a mustang. They’re always going to be wild. But, you come to an understanding.

“(We don’t want) to break their spirit. The whole idea is these animals were running free, and I just want to help give them good homes.”

HILDEBRAN -- Traffic is being diverted around an eastbound exit on Interstate 40 after an early morning shooting Tuesday.

Man found dead on side of street

A man was found dead Monday afternoon on the side of a street in Morganton.

A man found dead on the side of a street in Morganton has been identified.

Listen to a man call 911 while he's being held at gunpoint by a woman who caused multiple hit-and-run collisions Tuesday morning on Interstate 40.

US Marshal charged with stealing from Walmart

DENVER, N.C. — A U.S. deputy marshal assigned to the Western District of North Carolina has been charged with stealing from Walmart on five se…

It has been nearly 15 years since Paulo Benedeti first fell in love with frozen yogurt.

Georgia woman shot by trooper in Burke County to be charged with attempted murder, kidnapping

A Newton man was killed in a crash near the intersection of U.S. 70 SE and 21st Street Drive SE on Thursday afternoon.

Why the colors of sunsets are so incredible

Why the colors of sunsets are so incredible

Valeria Escudero makes her horses smile during the Mustang Mixer spin-off on Tuesday.

Lamb Farm held a spin-off of its Mustang Mixer on Tuesday night.