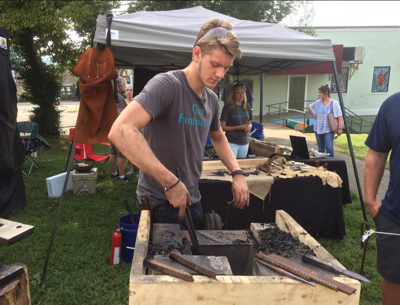 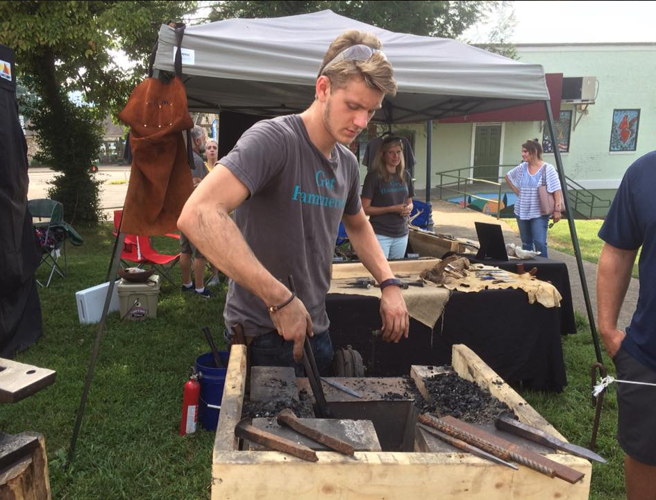 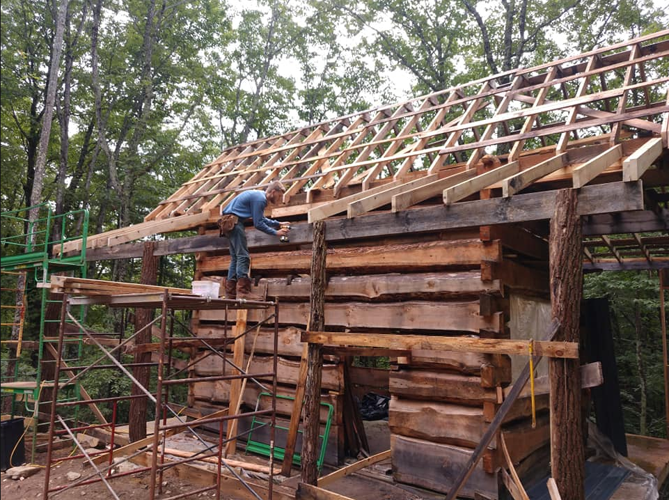 Raleigh Avery helps to build a cabin at the Turtle Island Preserve. 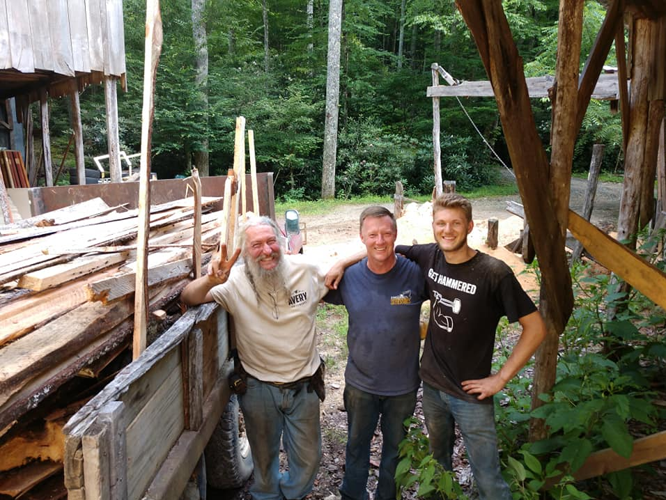 Pictured (from left) are Eustace Conway, local resident Randall Buchanan and Raleigh Avery taking a break from building a cabin. 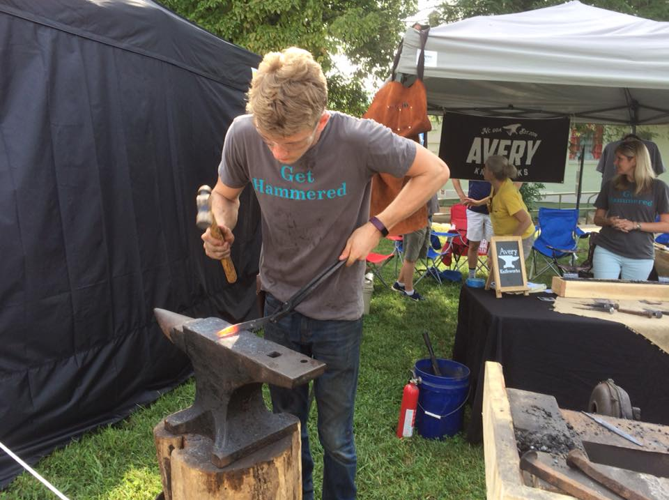 Raleigh Avery shapes a knife on his anvil at the Historic Morganton Festival last year. 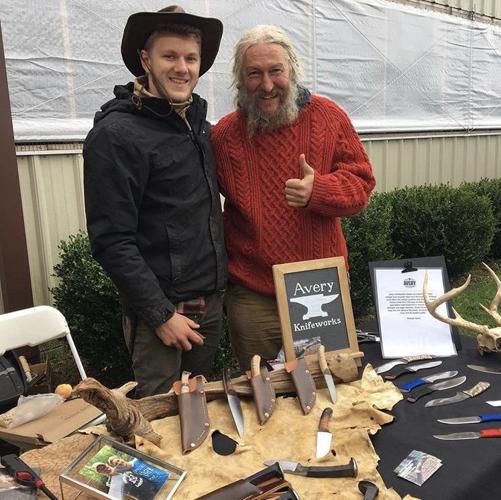 A Morganton native who has found fame on a reality TV show is returning home for the Historic Morganton Festival.

Raleigh Avery, 19, a 2018 graduate of Patton High School, is a familiar face on the latest season of History Channel’s “Mountain Men,” a show that chronicles the lives of people across the country who live off the land and practice survival skills such as hunting, fishing, fur-trapping, skinning and tanning hides, blacksmithing and logging.

One of the men featured on the show is Eustace Conway of Boone, who practices and teaches these skills on his property, an outdoor education center called “Turtle Island Preserve.” Avery made his debut on “Mountain Men” this season as Conway’s apprentice, learning skills that have almost been lost to the modern world.

Avery said the “mountain man” life appealed to him from an early age. Growing up, he participated in Boy Scout Troop No. 184, sponsored by First Baptist Church of Morganton, becoming an Eagle Scout in 2018. He led the troop on service outings to Turtle Island starting in 2013, where he met Conway and Conway’s friend and business associate, the late Preston Roberts.

“Preston Roberts was a mentor to me even before Eustace was,” Avery said. “Preston Roberts inspired me to be an educator wherever I am. Preston instilled ideals of sanctity and respect for the natural world and life. He was a spiritual leader for me more than anything. An example of the impact Preston and Eustace have had on (my) life would be the day we killed and butchered a hog we had put months of work into raising. Experiencing death in every sense and reverently harvesting our own means of life from that death gave me real and unforgettable insight into the reality of life.”

Avery returned to Turtle Island each summer for a boys’ camp, which he said “changed my life and strengthened me like no other young boys program could.” During that time, Roberts taught Avery the art of knife-making, which Avery developed a passion for, creating his own knife-making business, Avery Knifeworks.

“I was 15 when I made my first knife,” he said. "Knife-making is the perfect culmination of many skills I developed as a young child.”

Roberts lost a battle with cancer and died in July 2017. Conway continued Avery’s education in making a living from the land.

“A year long internship with Eustace Conway in high school brought the two of us closer,” Avery said. “Now we work every hour I can feasibly be there to live and learn with him. The list of skills and trades I have proficiently picked up at Turtle Island is astonishing, and that is the goal of any program or outing we host there. Mine would include blacksmithing, knife-making, forestry, logging, chainsaw operation, sawmilling, carpentry, roofing, welding, teaching and a few more.”

Avery has earned that knowledge through hard work, sweat equity and even pain. Viewers empathetically winced as they watched Avery in a recent episode get his hand crushed between two logs while helping to build a cabin. A trip to the hospital revealed he had broken a bone in his hand and one of his fingers.

“My hand is fully healed now, but it was a struggle to work with while it was broken,” he said. “Two days after I fractured it, I was back to swinging a sledge hammer and felling trees for the cabin build.”

Conway is a source of inspiration for Avery.

“Eustace Conway is an anomaly of a human being,” he said. “He has accomplished more than most can dream about. His life vision is to raise the consciousness and ability of all people that is so lost in the modern world. We both see the population slipping away from reality, and it dangerous. People are losing touch. Our mission at Turtle Island Preserve is to raise the consciousness of all people by getting them back in touch with their roots and the natural world.”

Avery hopes that message is resonating with the show’s international audience.

“It’s exciting to show hard work and real old-time living to the camera,” he said. “I hope it inspires some of the millions of viewers the show has to pick up traits of our lifestyle and start getting back in touch with reality. Watching some of my best experiences on TV, like building my cabin or making a knife, is an absolute pleasure. I’m so grateful to have those memories captured on film to one day show to my grandkids.”

The fame has taken a little getting used to.

“A friend of mine recently asked, ‘You know, it’s kind of a big deal that you’re on Mountain Men, right,’ and it still doesn’t feel like that,” Avery said. “I’m truly just grateful to be sharing my unique experiences with a big and enthusiastic audience. But it is pretty cool to be standing in line at a gas station, look at the time and realize, ‘Oh - I’m on TV in four countries right now!….wait - how much is this drink?’

“It’s great to have people recognize me from the show and get excited about my work, but I’d much rather them see my knives or my cabin in person, rather than through the filter of television. People can really only get a glimpse of the work Eustace and I do. Go to my website, watch me teach blacksmithing at a festival, come volunteer at Turtle Island on our many work days, see it and experience it yourself.”

His business has taken off rapidly.

“I am in love with the work I do,” Avery said. “It’s my passion to make and create, and Avery Knifeworks has been my outlet for that over the last four years. I’ve sold hundreds of knives to more than half of the 50 states, and several orders have been made from overseas. ”

He also is pursuing a degree in marketing at Appalachian State University.

“Couple that with the work I do with Eustace, and there isn’t a whole lot of time left over,” Avery said. “I am constantly on the move. I’ve learned to make short amounts of free time with loved ones and friends meaningful and memorable.”

He plans to move his business to Boone to make life a little less hectic.

“I envision a storefront that triples as a production facility, as well as a place to educate people about my craft with walk-in demonstrations and classes,” Avery said.

Even though he’s moving, Morganton will always have a special place in his heart.

“I love Morganton and the surrounding area,” Avery said. “It will always be home to me. My family has deep roots in the Table Rock area. Growing up in the small and close-knit community that Morganton is with encouragement from my parents and extended family that all call this town home allowed me the freedom and support to explore the things that shaped me into the person I am today. I owe a lot to my parents and to this community, and I’m proud to be a Morganton native."

He is excited about returning for the festival.

“I’ll be on the WCNC ‘Charlotte Today’ show from 11 a.m. to noon (Friday) with Ed Phillips (director of the Burke County Tourism Development Authority) to promote our hometown Historic Morganton Festival, where I’ll be demonstrating knife-making and selling custom knives. I’ll be set up on the old courthouse square closest to the arts council building. You’ll hear my anvil tinging or smell the smoke from my coal forge! ”

He looks forward to learning more from Conway.

To learn more about Eustace Conway and his Turtle Island Preserve, visit www.turtleislandpreserve.org.

“Most people my age have grown up only considering the fact that they need to plug into our system with a job and college education, and the rest will take care of itself,” Avery said. “The unfortunate reality is that Americans are losing their freedom, because we have given up knowing how to create our own means of survival, and instead spend our lives making money to let other people do it for us. We know that this world is suffering from unsustainable practices and systems. People my age need to learn to balance the comfort of a modern life with a healthy and free existence past generations knew. The way to do that is to make a choice to empower yourself with knowledge and skill that you work hard for. That’s the key to a free and meaningful life.”

CONNELLY SPRINGS -- One person is dead and several others are injured after a three-vehicle crash in eastern Burke County.

CONNELLY SPRINGS — A woman was killed and four others, including two children, were injured in a three-car crash Thursday.

CONNELLY SPRINGS — A woman who was killed in a house fire earlier this month has been identified.

2 people killed, 5 others transported for injuries in Sunday wreck in Marion

Two people were killed -- the 53-year-old driver of a pickup truck and a 10-year-old passenger of an SUV -- and two other people were airlifted to regional hospitals following a two-vehicle wreck on East Court Street Sunday evening near the WestRock plant in Marion.

As Hurricane Ian barrels into Florida, North Carolina emergency management officials were busy getting prepared for whatever the state may see…

County, town declares state of emergency ahead of Ian remnants

Ahead of what is now Tropical Storm Ian, Burke County and the town of Valdese declared states of emergency on Thursday afternoon.

The incoming hurricane has prompted the cancellation of some events originally scheduled to take place this weekend, including:

Burke County Public Schools will hold a remote day for students Friday, Sept. 30 in anticipation of Hurricane Ian's impact on the area.

Trees and power lines knocked down by Ian

Trees and power lines knocked down by Ian

Raleigh Avery helps to build a cabin at the Turtle Island Preserve.

Pictured (from left) are Eustace Conway, local resident Randall Buchanan and Raleigh Avery taking a break from building a cabin.

Raleigh Avery shapes a knife on his anvil at the Historic Morganton Festival last year.