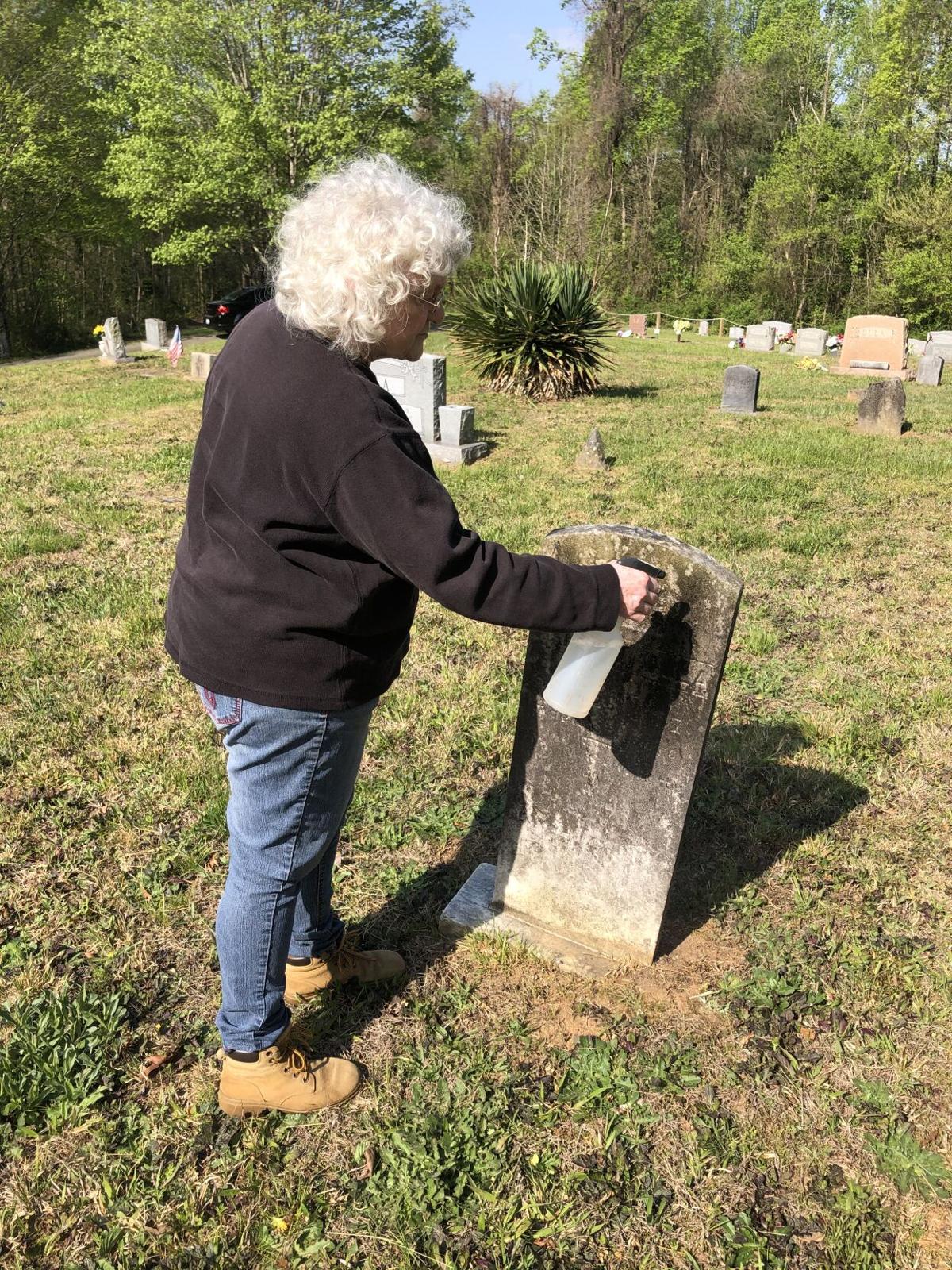 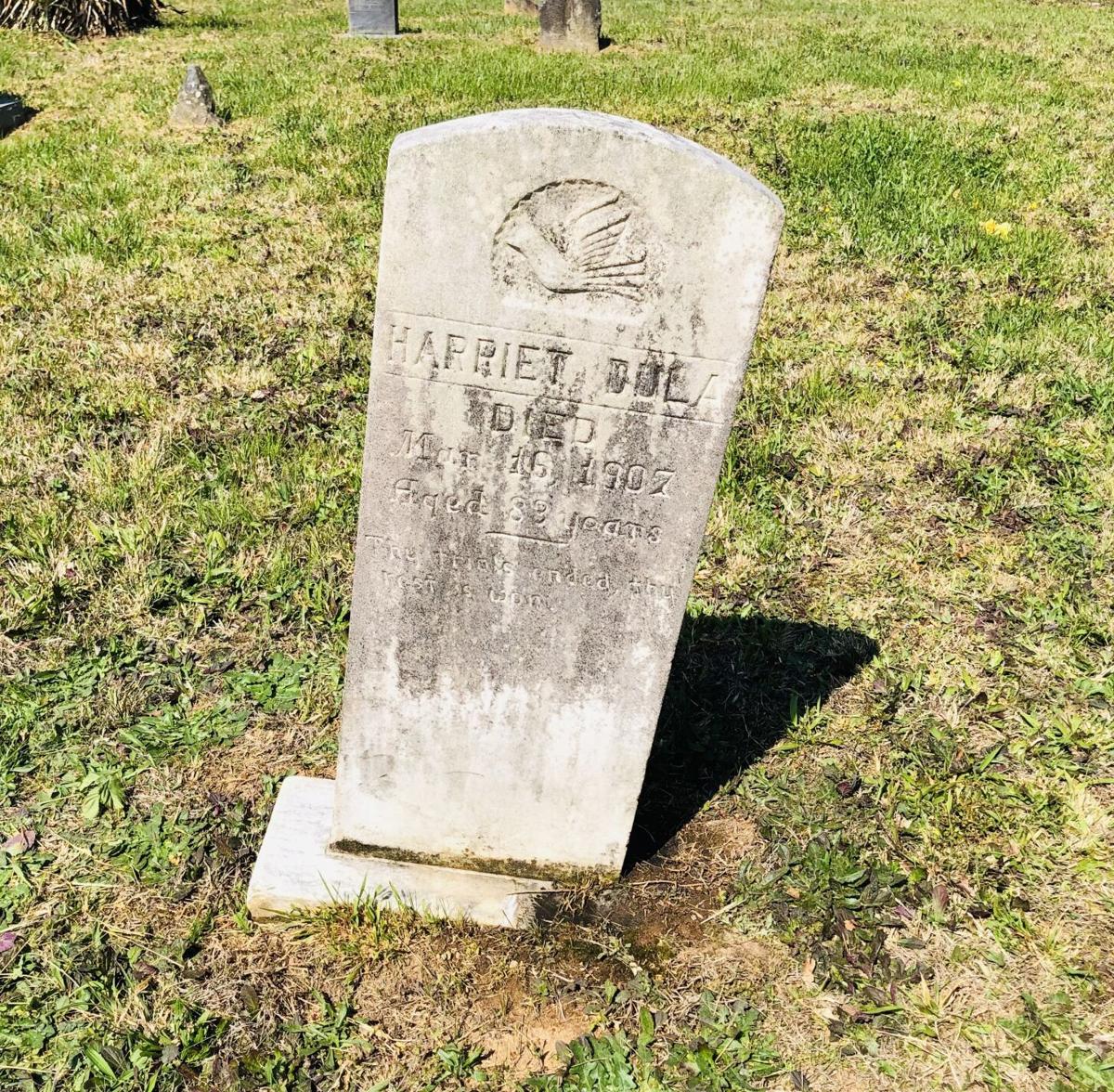 Harriet Harshaw Dula is buried in the Dulatown Cemetery.

My friend Susan Houck and I share a love of history. Early one crisp April morning a few weeks ago, Susan and I headed to the Dulatown community in Caldwell County to visit my great-great-grandmother, Harriet Harshaw Dula.

The unusual thing about our visit was that it happened in a cemetery.

Susan recently received a National Society Daughters of the American Revolution Community Service Award for her work researching and preserving gravesites. As we traveled to Dulatown Memorial Park, also called the Dulatown Cemetery, Susan and I talked about what makes working in cemeteries satisfying.

“I love the quiet and solitude,” she said. “I feel connected to the people whose headstones I clean and work on, and I want to know their stories.”

I was happy to share my great-great-grandmother’s story as I know it.

Harriet Harshaw was born into slavery around 1824 and grew up in the Piney area of Burke County. Until recently, little was known about her parentage other than that her mother was enslaved and may have been from Virginia. There is no indication that Harriet’s mother ever lived in North Carolina, but several of her sisters also lived in Burke County.

In recent years, DNA matches between Harriet’s descendants and those of a local slave owner, Jacob Harshaw (1787-1886), present strong evidence that he was her father. A wealthy Burke County farmer who accumulated his fortune by leasing and selling slaves, the 1860 U.S. Federal Census Slave Schedules indicate that Harshaw had 121 enslaved people at the time, making him the second largest slave holder in Burke County.

Harriet’s early life is clouded in mystery, but it appears that she bore her first child when she was about 12 years old. The father of the child is unknown, but is suspected to have been a man to whom her services as a slave were being leased. Seven years later, Harriet bore a second son under similar conditions. Three years after that, she bore a daughter, again under the same circumstances.

In 1846, Harriet and her two youngest children were sold to Squire Alfred Dula (1812-84), a wealthy and recently widowed farmer of Irish ancestry. It appears that Harriet had to leave her eldest son behind when she became the housekeeper at the Dula home in Caldwell County. In addition to rearing her younger son and daughter, Harriet became the principal caregiver for Alfred’s six children.

About six years after coming to the Dula household, Harriet gave birth to a son fathered by Alfred, who had chosen not to remarry after the untimely death of his wife. Over several years, Harriet bore a total of eight children to Alfred. Another child, fathered by a Black man who was probably free, died in infancy during the early 1860s. The infant was the first person buried in what later became the Dulatown Cemetery.

An industrious woman, Harriet worked as a seamstress in addition to her housekeeping duties. She made clothing for local people and was allowed to keep the earnings for her family. Harriet learned how to read and write and engaged in business transactions, in her later years investing in a local gold mine. She became one of the first Black women in Caldwell County to own land.

After the 1863 Emancipation Proclamation, Harriet and most of her children remained in Dulatown. Over time, Alfred deeded and willed as much as 2,000 acres of land to all of Harriet’s sons, so her children established homes and farms. The stability of owning land was unlike the experience of most recently freed Black people, who generally had no assets and were denied the privilege of governmental land grants, such as those that were given to early settlers.

Harriet lived her final years in the home of her youngest son, who had donated some of the land that he received from Alfred to establish the Dulatown Cemetery. Prior to her death, some of the acreage was lost to property taxes, but her descendants maintained significant holdings, and many of them still live in the Dulatown community.

Harriet left behind more than 100 grandchildren, one of whom remembered attending her grandmother’s funeral as a child. It was the largest funeral she had ever seen. A carriage drawn by two white horses pulled the coffin up the hill to the grave site. There were more people in attendance that day than she had ever seen in one place.

Harriet still rests at the crest of the hill overlooking the main road. She is surrounded by at least seven generations of her descendants; steadfast in the presence of the family she sacrificed so much to keep together.

Susan and I finished cleaning the old marble headstone and spent some time quietly reflecting on its inscription: “Harriet Dula Died March 16, 1907. Thy trials ended, thy rest is won.”

As we ended our visit, Susan reverently said, “Thank you, Miss Harriet.” With a full heart, I said, “See you next time, Mama Harriet.”

Leslie McKesson is a member of the Morganton Writers Group.

Burke County commissioners have approved a lease agreement with a developer for “glamping” at the county park at Lake James.

Harriet Harshaw Dula is buried in the Dulatown Cemetery.