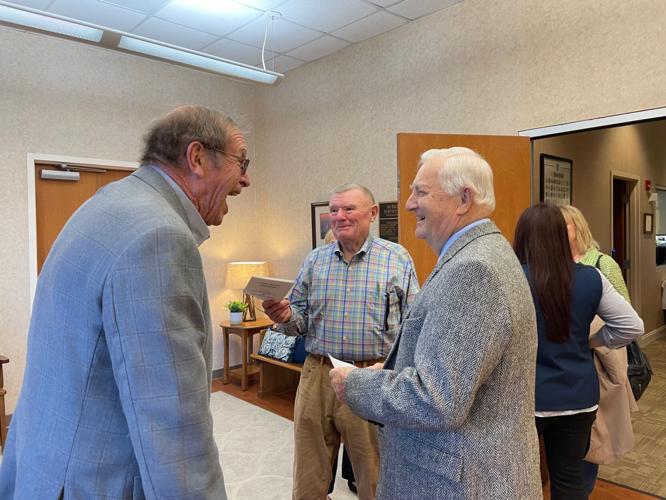 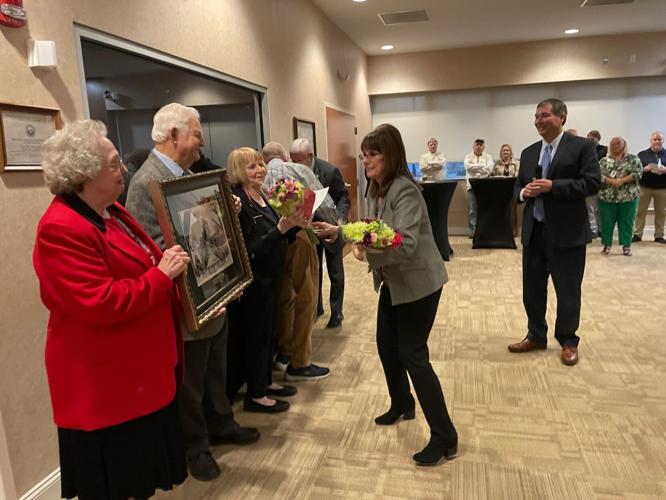 Burke County Clerk to the Board of Commissioners Kay Draughn presents bouquets of flowers to Ellie Abele and Shirley Taylor during a reception Friday honoring their husbands. 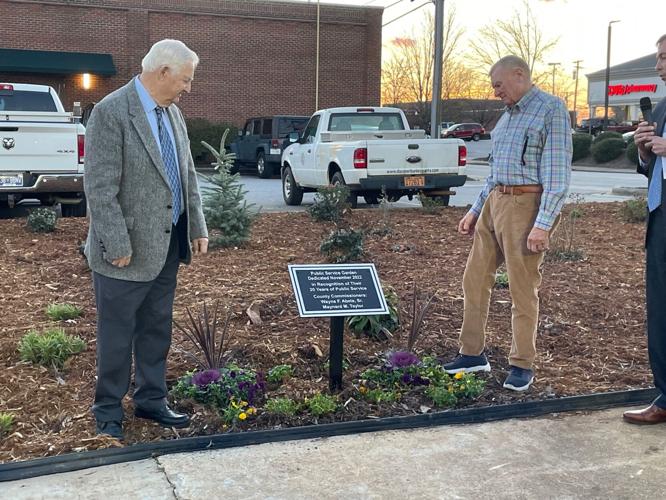 Maynard Tayor, left, and Wayne Abele were honored on Friday with plaques at a new Public Service Garden that is between the Burke County General Services building and Bouchelle Street in Morganton.

Two long-serving county commissioners were celebrated and honored on Friday with a reception and gifts.

Wayne Abele and Maynard Taylor have both served on the Burke County Board of Commissioners for 20 years. The two did not run for reelection this year and their time on the board has ended.

But 20 years of service on the board of commissioners meant also serving on numerous committees.

Burke County Commissioner Chairman Scott Mulwee said during the reception that it’s not just county commissioners meetings that the two have attended.

He said serving for 20 years meant tens of thousands of hours that Abele and Taylor have put into the county with emails, phone calls, traveling to Raleigh, working with the Western Piedmont Council of Governments, committees they served on as part of their position and working with their constituents.

Commissioner Vice Chairman Johnnie Carswell has served with the two for 12 years on the board and said they have sacrificed the time away from their families and made the hard decisions and did what they had to for the county.

“Wayne and Maynard, this county will not ever be able to repay you back for the things you have done, for all the people you have touched and the lives you have touched, you both have done that,” Carswell said. “You both have put that dedication forth and put yourselves forth. There’s nothing better than a public servant and you guys are the epitome of what a public servant is.”

Mulwee and Carswell again read the board proclamations for each and presented them with framed copies. They also presented each with a large framed photo of the Old Burke County Courthouse.

Clerk to the Board of Commissioners Kay Draughn presented Abele’s wife, Ellie, and Taylor’s wife, Shirley, with a bouquet of flowers.

The crowd in attendance was then asked to go outside for a special presentation, which was a new Public Service Garden that is between the General Services building and Bouchelle Street.

Mulwee made the presentation of the Public Service Garden recognizing Abele and Taylor for their 20 years of service on the board.

Alan Glines, community development director for the county, explained the garden is a pollinator garden that will be good for bees and the plants will bloom throughout the summer season.

In recognition of Abele’s 12-year service as a trustee of the Risk Management Pools committee of the North Carolina Association of County Commissioners. Bob Carruth with the NCACC presented Abele with a clock.

Abele thanked people for coming out to the reception, and praised the county staff as well as the county managers who have served during his time. He became emotional as he also recognized the more than 300 people who lost their lives to COVID-19 in the county.

Taylor said, “Who would have ever thought that a little ole country boy would ever have his name printed on a plaque and a place donated, and let me say to you I really, really appreciate that. Thank you so much for that gift, which will last for years, I assume.”

He thanked his family for being there and acknowledged his wife, saying she’s been a good wife and good supporter.

Carswell closed out the reception, saying, “I’m in charge with doing closing remarks but we’re not going to do any closing remarks because your life is not closed. It’s just the beginning of a new chapter.”

He added, “Words will not express our appreciation to you for what each one of you have done over the past 20 years.”

Commissioners-elect Randy Burns and Phil Smith are expected to be sworn in on Dec. 5, according to county officials. The two new commissioners would then take their seats for the board’s December pre-agenda meeting.

Police are investigating the death of an infant Tuesday at a motel in Morganton.

Patrons and fans of Catawba Brewing Co. have been lamenting its demise in Morganton since the company that bought it decided in October to clo…

Cops: Teen stabs brother in the head with pocket knife

An 18-year-old landed a felony charge after a domestic dispute Wednesday night.

VALDESE — Stepping up to a butcher and asking for a particular cut of meat is something that’s been missing in Valdese for more than a decade.

A pregnant woman was among three people transported to the hospital with injuries sustained in a four-vehicle wreck on Friday, according to th…

A multi-vehicle wreck on Sanford Drive on Friday afternoon has closed a lane of traffic.

Dark smoke could be seen billowing into the sky miles away from a fire that destroyed a home north of Morganton on Friday.

A retired Burke County educator, principal and current school board member has been selected to serve on a high-profile state board.

Burke County Clerk to the Board of Commissioners Kay Draughn presents bouquets of flowers to Ellie Abele and Shirley Taylor during a reception Friday honoring their husbands.

Maynard Tayor, left, and Wayne Abele were honored on Friday with plaques at a new Public Service Garden that is between the Burke County General Services building and Bouchelle Street in Morganton.