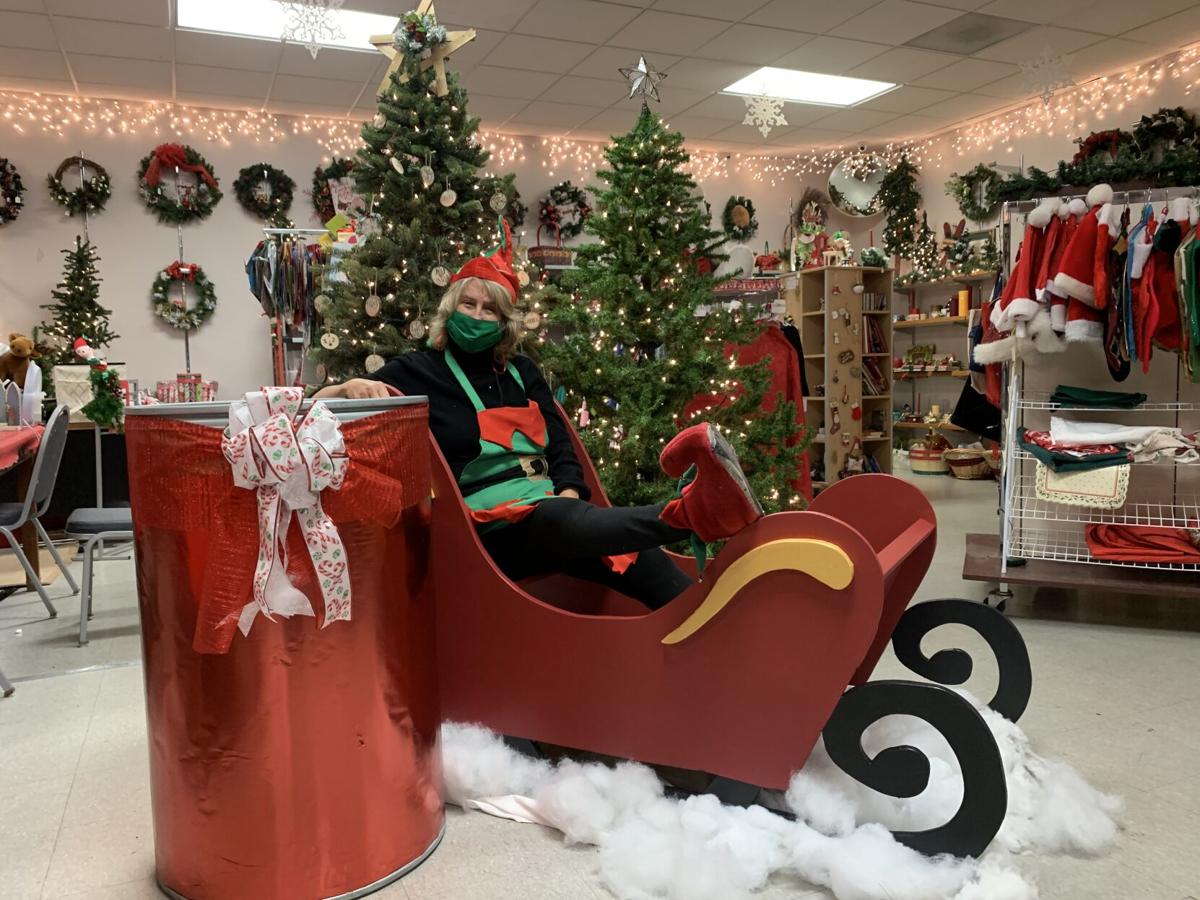 Terre Colabella, manager of the Elves' Workshop Christmas store located within Burke United Christian Ministries at 305B W. Union St. in Morganton, shows the collection bin placed in the store to receive holiday food items for people in need in Burke County. 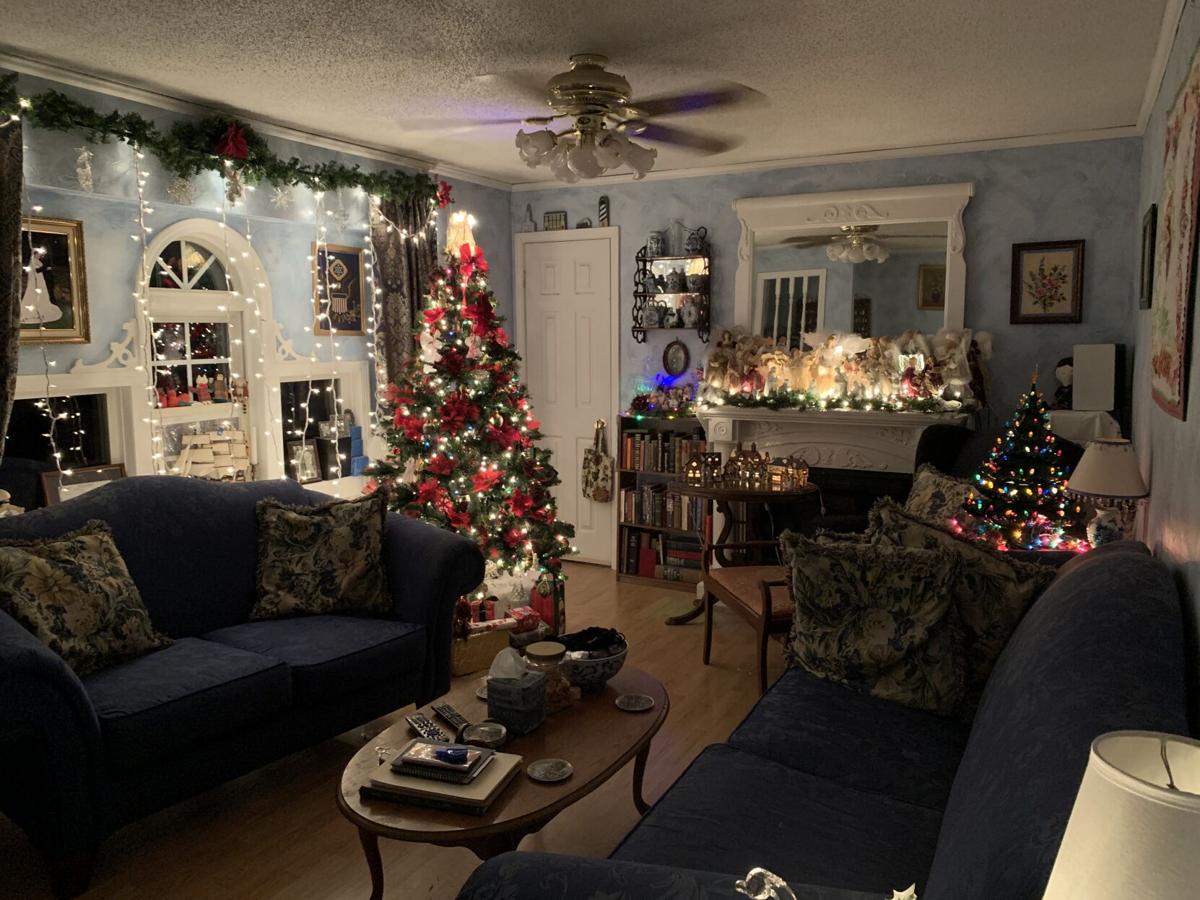 The writer's house is ready for the Christmas season. 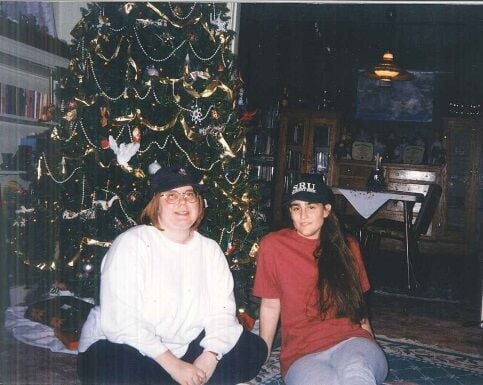 The writer (right) and her roommate, Mary Klingensmith, sit in front of Mary's Christmas tree in the late 1990s. 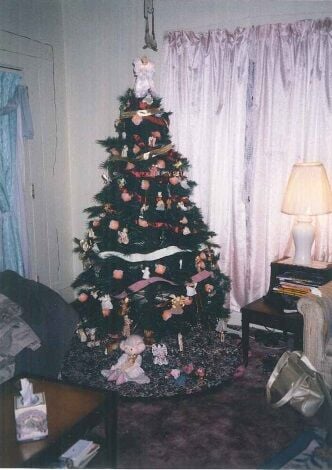 I have a confession to make: I didn’t decorate my house for Christmas last year.

This is unusual for me, because even though I have a small house, around Thanksgiving each year, I drag up many boxes and bins of Christmas decorations from the basement and deck my halls in festive splendor.

I think I picked up the Christmas decorating bug in childhood from annual trips to Kraynak’s. Everyone in western Pennsylvania knows about Kraynak’s, a Christmas decoration superstore in Hermitage, Pennsylvania, about an hour north of Pittsburgh, my hometown. Each year, local children look forward to seeing the store’s Christmas display.

The display was so popular when I was growing up that we had to wait in a line that stretched halfway around the store to get in, which ramped up the excitement. As my Mum and Gram and I inched closer and closer, we started to see colored lights twinkling and hear soft Christmas music emanating from the doorway leading into the display showcase.

When we finally crossed the threshold, we were transported into a Christmas wonderland. A long hallway runs past nearly a dozen large partitioned spaces depicting different holiday scenes. Each scene has its own theme and features gorgeous decorations, animatronic figures and sound effects that bring each life-sized diorama to life.

I remember furry woodland creatures turning their heads and waving their paws against drifts of glittery cotton snow. A scene depicting Santa’s workshop had elves hammering on wooden toys and stuffing gifts into Santa’s sack. Warmly dressed children in a snowy park skated on a crystal pond and bounced on a teeter-totter while their simulated laughter erupted from the speakers. I watched with fascination one year as a toy train chugged and tooted its way along a narrow shelf running high along the wall of a Victorian-era living room with roaring fireplace, splendorous Christmas tree and contented family. The train would disappear into a hole in the wall and reappear a few minutes later to complete another lap.

When I was young, I was unaware that the store presents the display for free to attract shoppers, but that’s part of the fun, too. After we went through, we would browse several different rooms filled with every kind of Christmas decoration you can imagine. Kraynak’s has a large toy section as well, so after choosing some decorations for our house, sometimes my Mum would let me pick out one of my Christmas gifts. After we checked out, we enjoyed lunch, often at Eat-n-Park (another western Pennsylvania institution), and continued shopping and taking in the sights of the season.

When I got my first apartment, I lived right down the street from Kraynak’s. My favorite purchase there was several sets of lights with delicate pink plastic petals layered around each bulb to look like roses. I thought that was the coolest thing ever. My roommate grew up in the same town as Kraynak’s and was an avid Christmas decorator as well, so each year we would have two Christmas trees in our living room and, of course, we would visit the display at Kraynak’s to kick off our holiday celebrations.

When I got married and moved to North Carolina, I continued to decorate the house for Christmas with gleeful abandon. But last year, something was different. I just felt too busy and overwhelmed and decided it wasn’t worth the effort, especially since I didn’t have plans to have anyone over. I took Christmas for granted, oblivious to what 2020 would bring.

After a months-long onslaught of bad news and uncertainty brought sweeping changes to everyday life, news outlets and health officials are now warning against gathering together for the holidays in fear of spreading coronavirus. My husband and I have never missed a Christmas in Pennsylvania with our families in the 20 years we’ve lived in Morganton, but will have to make a decision about that next month.

I have turned to Christmas decorating as a way to cope with that big question mark hanging over our lives. I binge-watched Christmas tree decorating tutorials on YouTube this month and scoured local thrift stores for decorations. Adding to my Christmas collection while supporting good causes like Habitat for Humanity, The Outreach Center and the Christ Centered Recovery Program lifts my spirits. Burke United Christian Ministries has even opened its own Christmas store, the Elves’ Workshop, which looks like a miniature Kraynak’s.

The empty Christmas bins are back in the basement. The Christmas tree in the living room is blooming with silk poinsettia flowers and homemade ornaments and already has presents under it. The ceramic tabletop tree glows with many different colored lights. Birds nestle in the greenery on the TV cabinet. The heavenly host on the mantel overlooks the nativity scene. Tiny figurines bask in the warm light shining from the windows of my mother-in-law’s Dickens’ houses.

It makes me think of those idyllic Christmas scenes I enjoyed in childhood. As I watch the animatronic angels on the mantel gently flutter their wings and wave their bulb candles two weeks before Thanksgiving, I vow never to take the holidays for granted ever again. I’m going to savor every moment, take time to reach out to friends and family to share the Christmas spirit, and make the best of whatever the rest of 2020 brings.

Tammie Gercken is a staff writer with The News Herald and a member of the Morganton Writers' Group. She can be reached at tgercken@morganton.com.

Nonprofit and community agencies across Burke County are gearing up for the Thanksgiving holiday next week.

“I felt like I was suffocating in my own body," said Chelsea Mackenzie on her COVID-19 symptoms. "I couldn’t make it to the kitchen. I couldn’t even hardly make it out of my bedroom.”

It doesn’t look like COVID-19 is going anywhere in Burke County, with 55 new cases of the virus reported Wednesday.

Organization changes up annual toy distribution due to pandemic

Foothills Farm and Art has a new manager, and she’s setting her sights on adding new vendors to the Morganton-based online hub.

Terre Colabella, manager of the Elves' Workshop Christmas store located within Burke United Christian Ministries at 305B W. Union St. in Morganton, shows the collection bin placed in the store to receive holiday food items for people in need in Burke County.

The writer's house is ready for the Christmas season.

The writer (right) and her roommate, Mary Klingensmith, sit in front of Mary's Christmas tree in the late 1990s.