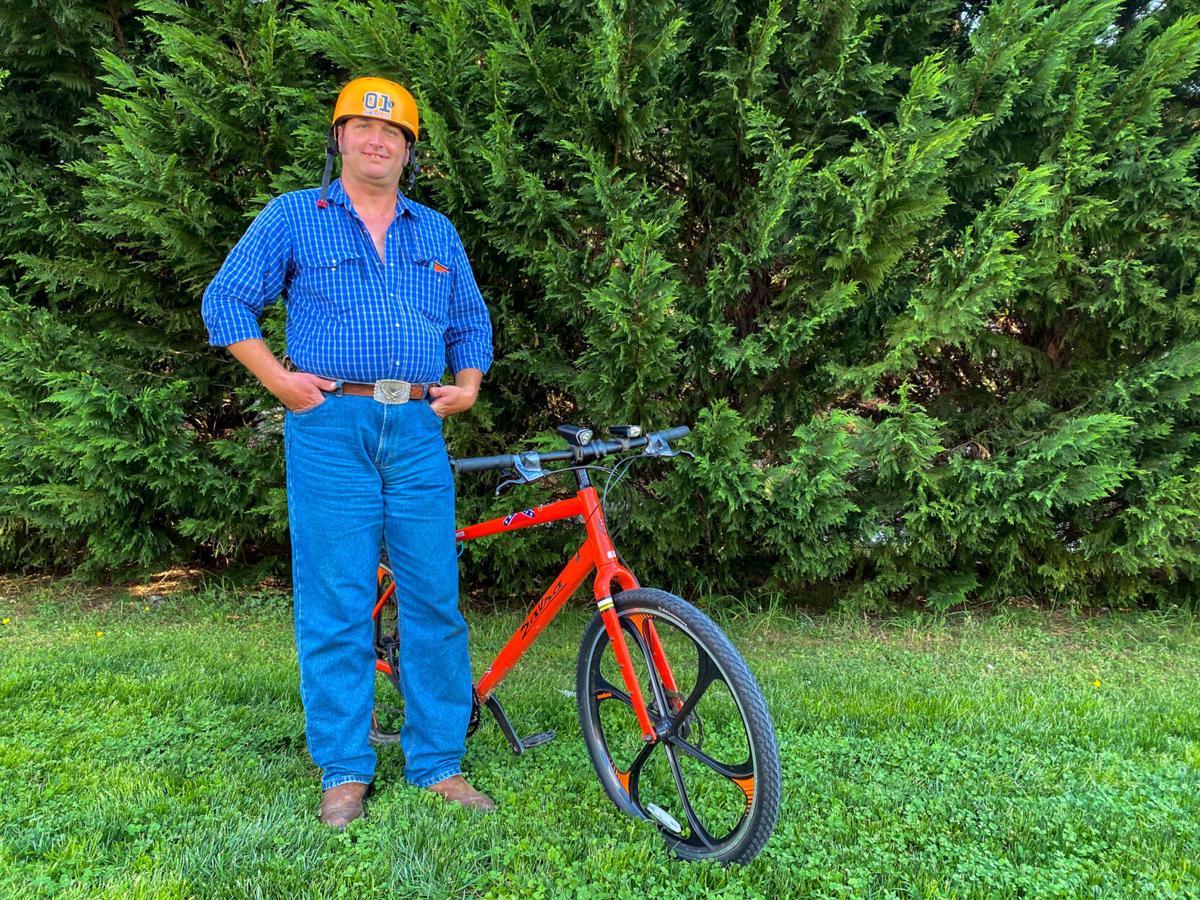 Burns poses for a photo with his General Lee-styled bicycle and helmet in downtown Morganton. 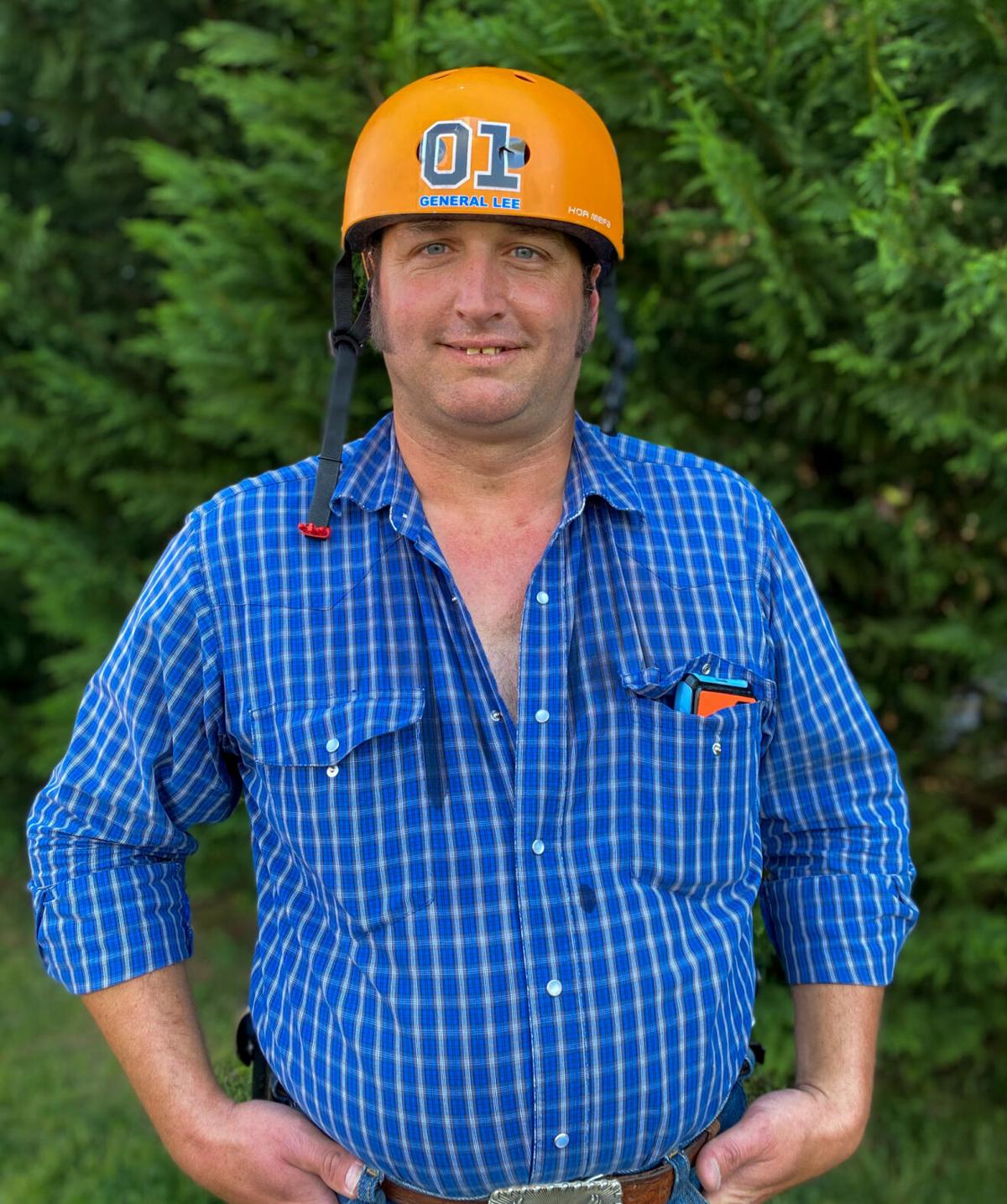 Burns has been a "Dukes of Hazzard" fan since 1997, he previously told The News Herald. 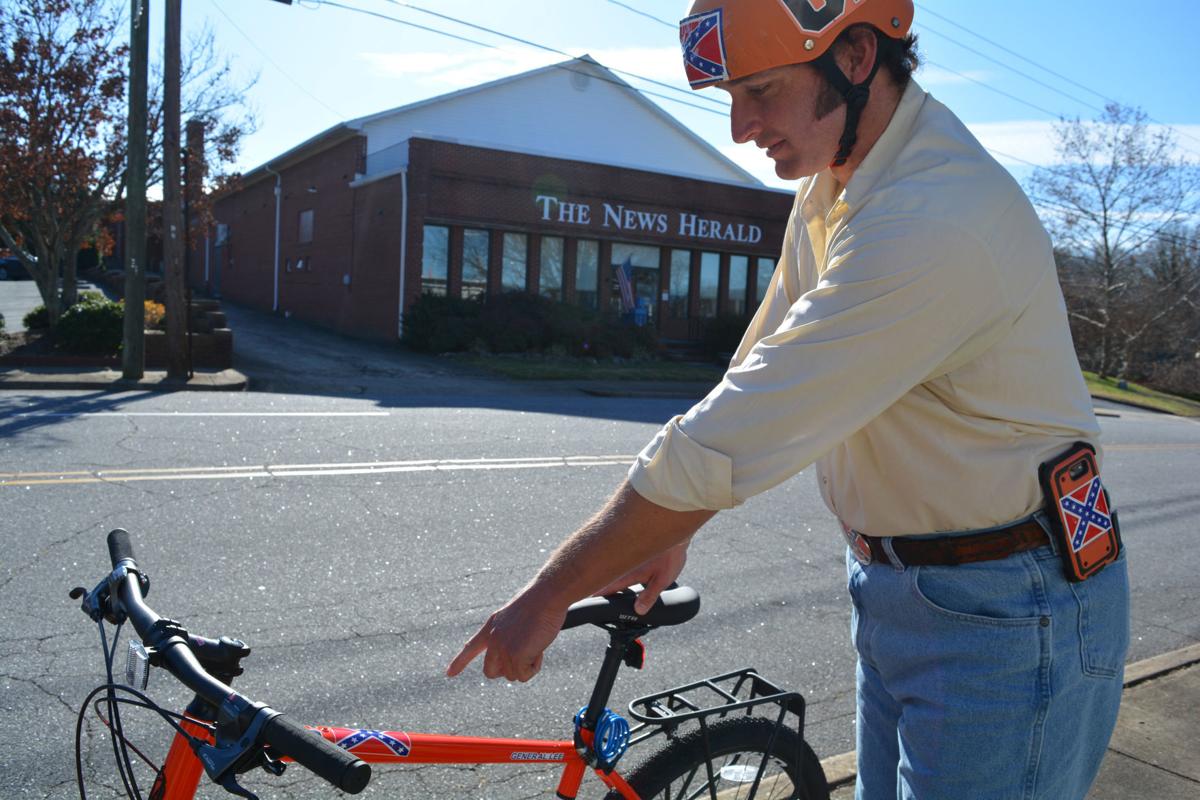 Billy Burns points out the stickers on the bike placed so it can resemble the General Lee. 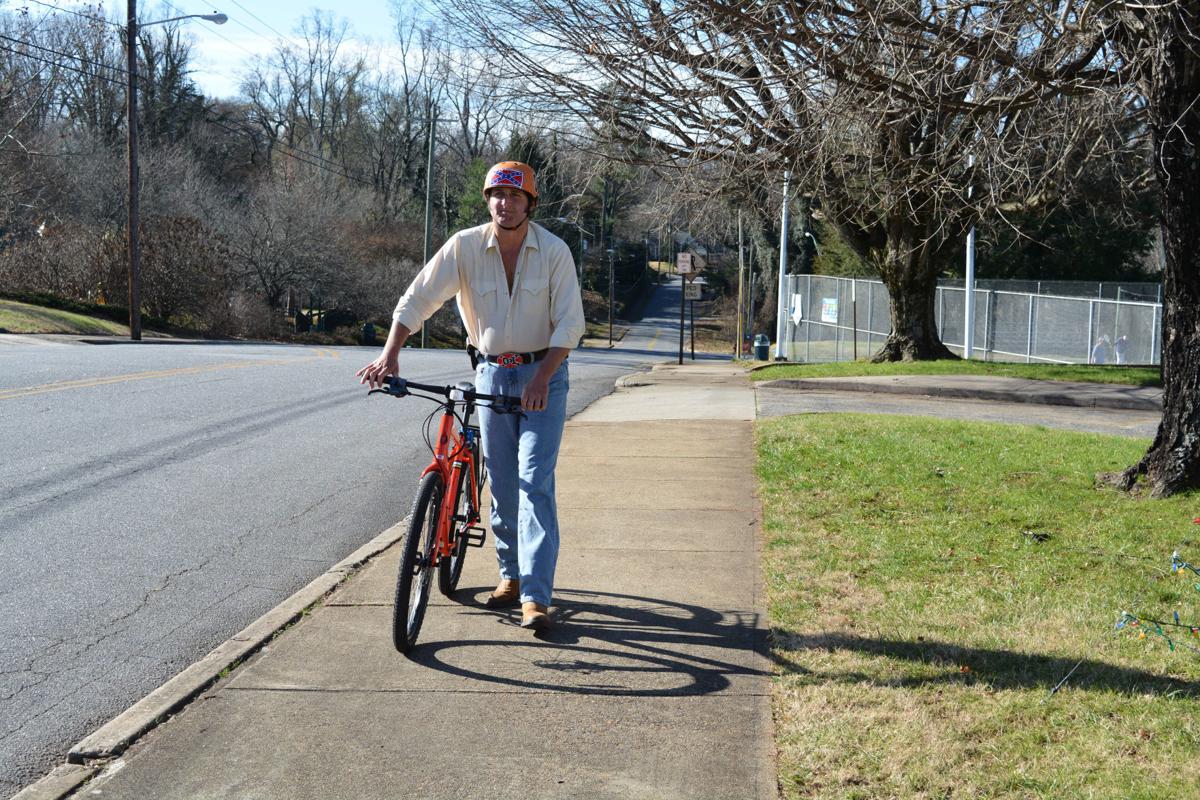 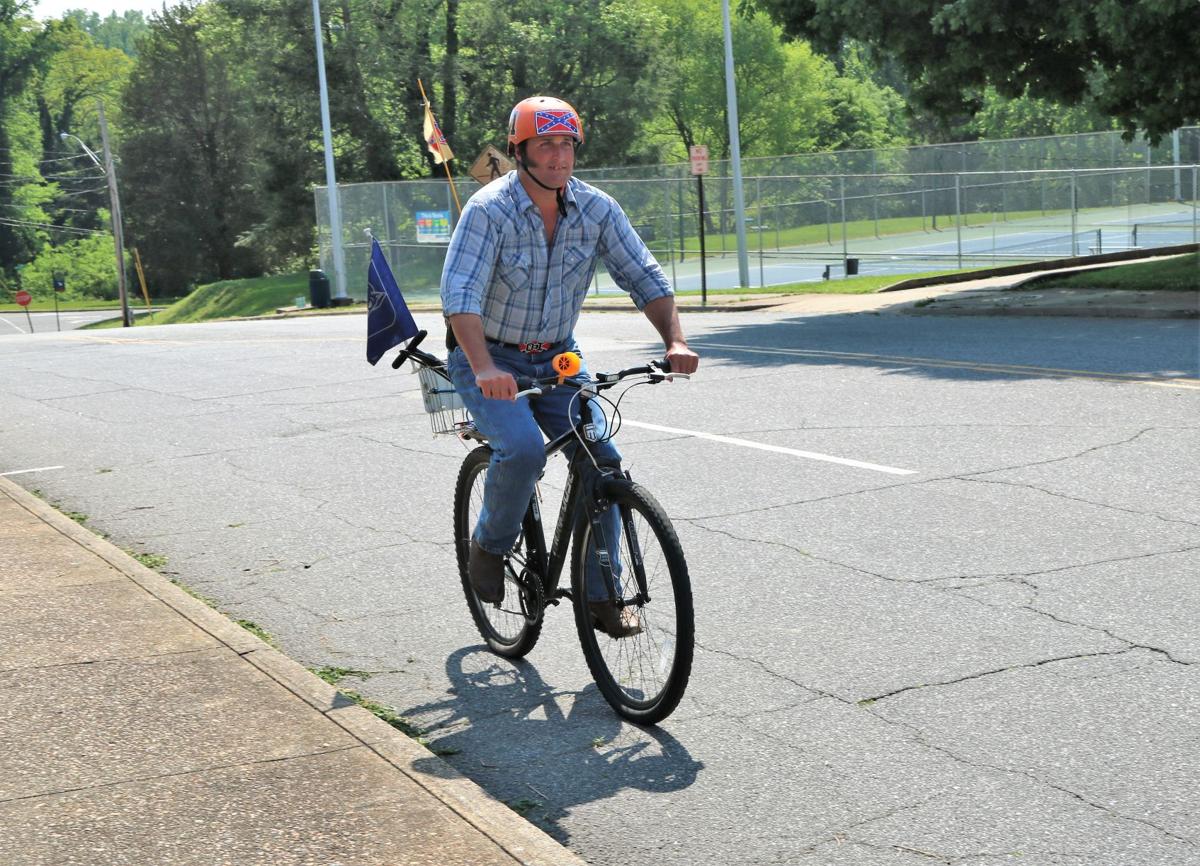 Billy Burns takes a General Lee-themed bike for a ride up Collett Street. 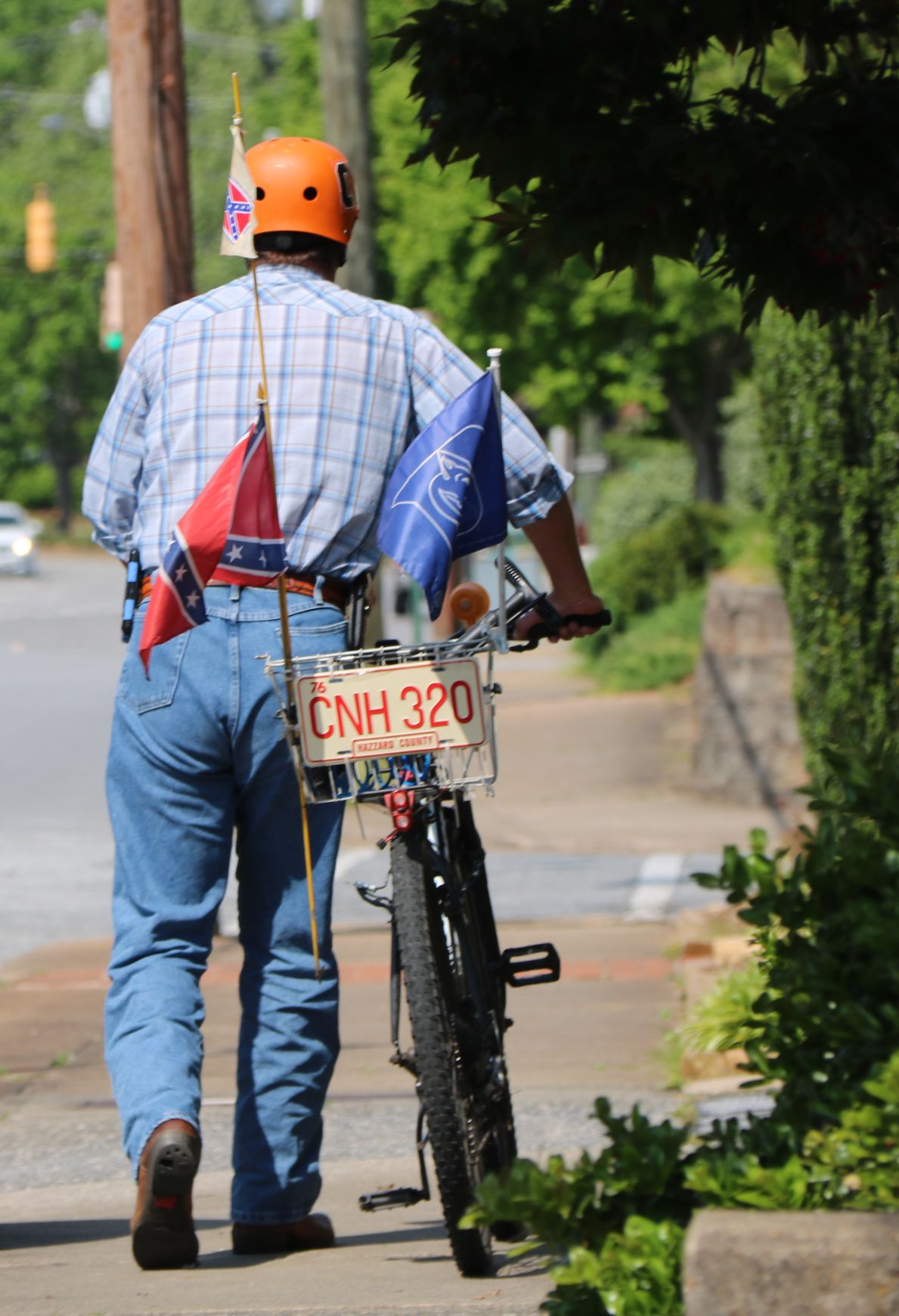 The bike is even fitted with a Hazzard County license plate.

NEWTON — Billy Burns has loved the Duke boys of Hazzard County since 1997.

Last month, he got to see “The Dukes of Hazzard”’s John Schneider, who played Bo Duke in the series for its seven-season lifespan, when he performed in Newton.

“It was awesome,” Burns said about the meet and greet. “Cody Carver came out and did a great show, and then John came out in the middle of a song and talked about Waylon’s (Jennings) music a little bit, then John did some of his stuff and it was just a great concert all the way around.”

Even more special, perhaps, was the meet and greet Burns had with Schneider after the show.

“It was great,” Burns said. “(I) was kind nervous and excited at the same time.”

It was a brief meet and greet, but he did end up with a souvenir to take home with him from the opportunity.

“Had about two minutes to talk to him, and he signed my program that I had,” Burns said. “I wished him a happy birthday because his birthday was a few weeks later, but that was pretty much it. It was exciting to do.”

Local celebrity shares story of his ‘Dukes of Hazzard’ love

Meeting him wasn’t really something Burns had thought about before.

“I’ve never really thought about meeting him, but Shannon Anthony brought it up to me back at the first of March and asked me if I’d be interested in going,” Burns said. “I said sure, and he arranged it for me.”

Anthony had heard about Schneider’s appearance in Newton and made a post on Facebook to see if any friends were planning to go. From there, multiple people chipped in.

“The responses started pouring in immediately with people wanting to donate money and others saying that they would take him if no one else was going,” Anthony said.

Three main donors helped to make it happen — one person who drove Burns to the performance, and two others.

It was wonderful to have a role in helping make it happen, he said.

“Billy is such a known entity in Morganton and there is no bigger fan of the Dukes of Hazard that when people started seeing that John was going to be so close that there wasn’t anything that was going to stand in their way to make it happen for him,” Anthony said. “It was just overwhelmingly tremendous.”

First, someone came forward and said they would be going to the event and would be willing to take Burns with them if someone else could buy his ticket. Another man stepped forward and bought regular tickets for the performance because the meet and greet tickets were sold out. Both of those individuals requested to remain anonymous.

Another person, Chris Garner, reached out to the Newton Performing Arts Center and told them all about Burke County’s own Duke boy. The executive director of the center called Garner and told him they had two passes they were holding, so Garner bought those tickets.

“Billy’s kind of a, he doesn’t really know this, but he’s kind of a special person to me,” Garner said. “I don’t even know him that well, but I feel like he’s just such an icon in the community and he really helps lift up people’s spirits when they don’t even realize it sometimes. Just seeing him walking around, listening to his music and you can always holler at him and he’ll holler back.”

Burns said he was thankful for everything the community did to help make this possible.

“I appreciate all those people that have good standing financially and offered to take me,” Burns said. “I had a wonderful time.”

Burns poses for a photo with his General Lee-styled bicycle and helmet in downtown Morganton.

Burns has been a "Dukes of Hazzard" fan since 1997, he previously told The News Herald.

Billy Burns points out the stickers on the bike placed so it can resemble the General Lee.

Billy Burns takes a General Lee-themed bike for a ride up Collett Street.

The bike is even fitted with a Hazzard County license plate.