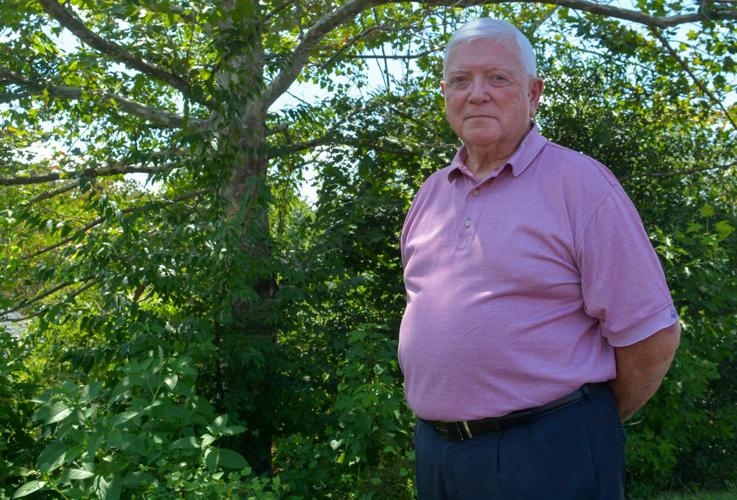 Johnnie Carswell, vice-chairman of the Burke County Board of Commissioners, shared his family’s heartbreaking experience with opioid addiction at a National Association of Counties conference in Colorado last week.

Burke County Commission Vice-chairman Johnnie Carswell, center, sits on a panel discussing opioids and lawsuits against manufacturers and distributors of the drugs. Carswell told the group how the drug affected his family and multiple other families in the county.

A Burke County commissioner who has been a leader in the state’s lawsuit fight against opioid makers and distributors didn’t just do it because of his position.

It’s also been a crusade with a personal connection, and he shared his family’s story in a powerful presentation to the National Association of Counties during its annual four-day conference last week.

Commissioner Vice-chairman Johnnie Carswell attended the conference in Denver, Colorado, and was one of the panelists during the session, “Counties plan funding as opioid settlement payout nears.”

After telling the emotional story of how addiction affected his family and numerous other families in Burke County, Carswell warned that anyone is susceptible to addiction.

“Remember, when every child wakes up this morning, they’re at risk,” Carswell said during the conference session. “Cause you don’t know what’s going to happen to them.”

The drug problem in Burke County has graduated from meth and opioid pills to also include fentanyl, like every other county in the nation, Carswell told the room.

He said the state and its counties have a plan to clean up the problem.

“It touches everybody. Nobody is immune,” Carswell said. “It’s real, and we’ve got a lot of work to do.”

Carswell told The News Herald that commissioners have not chosen what entity will operate the treatment facility but they have decided to take a regional approach. He said Burke County has been in talks with other counties in Western North Carolina who are interested in partnering with it on the long-term aspect of the project. Those other counties that would be part of the rehab consortium would use their opioid lawsuit settlement money to help pay for beds they use in the facility.

Carswell said it will not be a 30-day, 60-day or 90-day treatment model that most places use. He told the conference session the rehabilitation program for an individual would be for as long as it takes.

He said long-term treatment should also include peer support and vocational training.

As for money Burke County will receive from the lawsuit settlement, Carswell said some of that will come soon.

Burke County is one of the counties and cities throughout the U.S. who sued opioid distributors Cardinal, McKesson and AmerisourceBergen and opioid manufacturers Johnson & Johnson and Purdue Pharma. The county joined the lawsuit in February 2018. The lawsuit was settled for $26 billion in July 2021, and Burke County is expected to receive approximately $13.4 million over an 18-year period.

Carswell sat on the state’s 555 Committee that is made up of five commissioners, five county attorneys and five county managers who, along with State Attorney General Josh Stein, fought to get North Carolina’s settlement.

During the panel discussion at the NACo conference, Carswell said Burke County will receive $570,000 at the end of this summer and then receive another payment of $1.1 million from the settlement by the end of the year.

County leaders have said the money will be spent to treat addiction in the county and region. Burke County also received $3.25 million from the state’s two-year budget in 2021 to renovate the former Burke-Catawba District Confinement Facility in Morganton to house the drug treatment facility. It also has received a planning grant of at least $275,000 from Dogwood Health Trust for a Western NC Regional Recovery Center, according to a grant award letter.

Carswell said the $13.4 million won’t be enough to operate the facility so the county will ask the General Assembly for operating funds for the regional treatment facility.

Carswell told those attending the conference that the Centers for Disease Control and Prevention had identified Burke County, Caldwell County and surrounding counties as a cesspool of pill distribution in Western North Carolina.

The CDC says retail opioid prescriptions dispensing rates have steadily fallen since its peak in 2012 but rates remain high in certain places in the U.S.

During the NACo session, Attorney Shayna E. Sacks with Napoli Shkolnik PLLC was a panelist of the session and said pharmacies are the ones in court facing lawsuits currently and they are pushing back. Those pharmacies are CVS, Rite Aid, Walgreens and Walmart, she said.

Cleveland County, which is next door to Burke County, saw 112.2 prescriptions filled per 100 people in 2020.

Only Moore County saw a higher rate at 124.5 prescriptions filled per 100 people in 2020, the highest rate in the state, according to CDC figures.

Those figures only account for prescription opioids and not heroin, fentanyl, methadone and other synthetic opioids.

While rates of opioid prescriptions have decreased over 15 years, the damage to many people and their families have been done.

The rate of deaths from opioids remains high. And opioid addiction and deaths are still happening.

A map from the CDC shows that while North Carolina saw a decrease in its opioid death rate from 2018 to 2019, that reversed the next year and it saw an increase in deaths from 2019 to 2020.

The body of a missing Asheville man was found Monday afternoon near Old Fort.

A motor vehicle wreck on Lenoir Road has led law enforcement to divert traffic on the road Tuesday afternoon.

A man who was picked up a second time in two weeks on felony drug charges had his bond dropped more than $200,000 at his first court appearance.

A Morganton manufacturer announced this week that it plans to invest $94 million to expand its operation and hire more workers.

Car flips over guardrail, lands on its roof on NC 18/US 64

A man was taken to a local hospital with what appeared to be minor injuries after a crash on N.C. 18/U.S. 64 late Tuesday afternoon.

The Burke County Board of Education met for its first work session of the 2022-23 school year Monday night.

Man wanted after failing to appear

UPDATE, Aug. 10: Court officials said Wednesday that Civitello's attorney appeared after court Monday and the order for his arrest was never f…

The North Carolina School for the Deaf held a stakeholder meeting Thursday in Morganton to unveil the school’s new strategic plan, update stak…

Gas prices fall below $4 per gallon

Gas prices fall below $4 per gallon

Johnnie Carswell, vice-chairman of the Burke County Board of Commissioners, shared his family’s heartbreaking experience with opioid addiction at a National Association of Counties conference in Colorado last week.

Burke County Commission Vice-chairman Johnnie Carswell, center, sits on a panel discussing opioids and lawsuits against manufacturers and distributors of the drugs. Carswell told the group how the drug affected his family and multiple other families in the county.