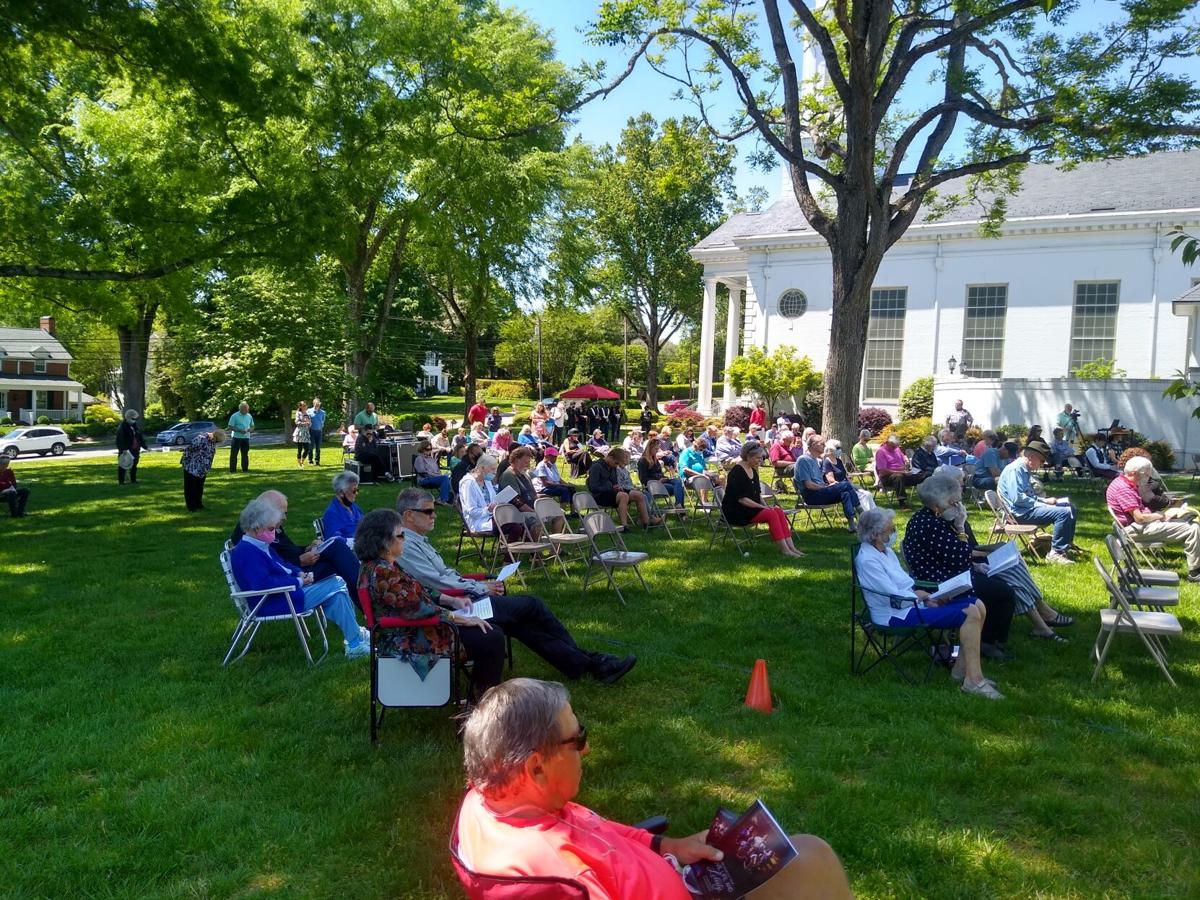 Local residents gathered on the front lawn of First Baptist Church of Morganton for the 2021 Burke County National Day of Prayer service on Thursday, May 6. 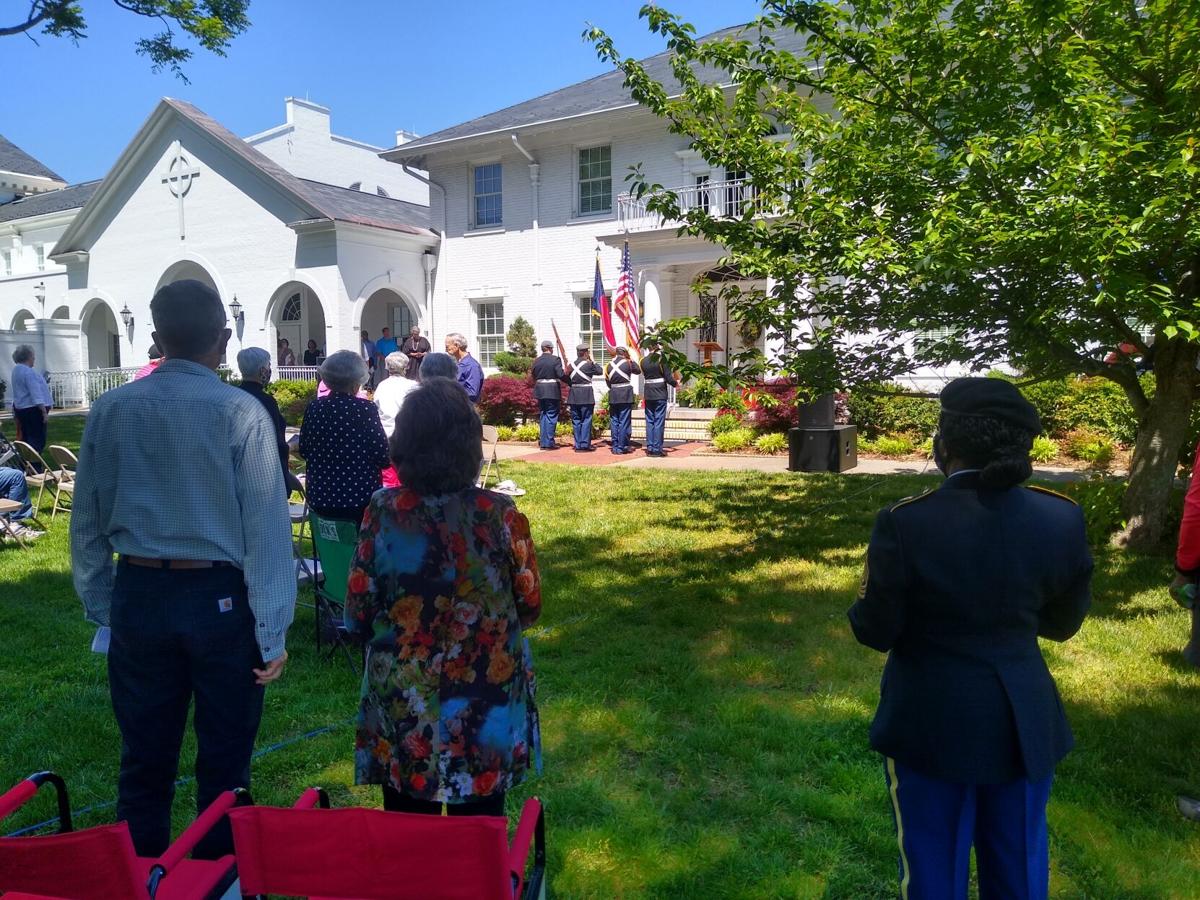 An honor guard presents the colors at the Burke County National Day of Prayer service.

In addition to faith leaders, the service featured local teachers, business owners and other community members praying for different aspects of community life. Although the service officially began at noon, music from the Celebration Church Praise Team could be heard as well over 100 people gathered on the church’s south lawn.

The service began with the presentation of the colors by Freedom High School JROTC and Rabbi Andy Meyerson of Congregation Beth Shiloh Messianic Synagogue blowing the shofar, a traditional Jewish call to prayer. Willette McIntosh and Edward Bland lent their singing talents to the service, McIntosh performing a passionate rendition of the national anthem and Bland singing “America the Beautiful.”

The Rev. David Doster of Gateway Bible Church welcomed the congregation, thanked the National Day of Prayer committee for its work putting the service together, and offered the afternoon’s opening prayer for unity.

“While there are many challenges that confront us as a people, nation and a community, we find our hope and strength in your Gospel,” Doster prayed, citing the Apostle Paul’s words from Ephesians that Christ’s sacrificial death has broken down the dividing walls of hostility between different groups of people.

Over the next 30 minutes, eight more Burke County faith and community leaders offered prayers for several different aspects of community and national life.

Unity was a central theme of the afternoon, with several speakers calling on Christians to put aside differences and come together.

Offering prayers for national, state and local officials was another theme of the afternoon. Several leaders prayed for wisdom and justice to prevail at every level of government.

“We thank you for our troops, our first responders and our law enforcement officers,” Logan said. “Thank you for their sacrifices and their families’ sacrifices.”

A third central theme of the afternoon was a call for a bold Christian witness in every sphere of life. Thedy Bowman, a teacher at Patton High School, called for Christians to display courage in the face of the COVID-19 pandemic.

“We have been too complacent, quiet, and fearful of the consequences of taking a stand for what is right and holy in this volatile political and socio-economic climate that is foolishly based on the precept that a government made of man could possibly be our salvation,” she said.

Bowman cited her belief that there has been “a great falling away” in recent years and called on herself and her fellow educators to “proclaim the truth, which is Jesus Christ in all that we say and do.”

Kellie Surrat, who prayed for the media, called for Christians in the media “to shape media coverage that will report both good news and ‘the good news.’”

“Let there be light in every dark place where the weapons of the enemy have formed to deceive, twist truth and bring false reality,” Surrat prayed.

Well after the service officially ended, dozens remained on the lawn, soaking up the abundant late spring sunshine. The Rev. Jerry Gamble, pastor of Mount Home Baptist Church, who attended the service, summed it up, saying he felt relieved to finally be able to gather with others to pray after a year that saw so many events canceled or limited to virtual platforms.

“I think it was a tremendous service,” he said. “I think everybody, including myself, has been touched by this. I’ve always believed in the power of prayer, but I’m more convinced than ever that prayer is what we need during times of difficulty.”

This unknown detail about Stonehenge might blow your mind

This unknown detail about Stonehenge might blow your mind

New book aims to teach history of US civil rights

New book aims to teach history of US civil rights

A resident at J. Iverson Riddle Developmental Center was found dead in a bathtub Saturday.

List of slaves sold in Burke County tells its own story

In 1993, Carolyn Corpening Collins Rowe compiled a list of slaves sold in Burke County from 1791 to 1851. Rowe, who was associated with the Af…

Woman thankful for deputies’ help after bear of a crash

June 4 could have been quite a bear for Mamie Carson -- but two local law enforcement officers lent her a helping hand.

Who is ready for the sweet surprises awaiting at Merrill Mischief?

Police say the driver was found lying in a woods line at a local elementary school after the chase.

Independence Boulevard is shut down between Wamsutta Mill Road and N.C. 126 after a truck hauling propane overturned Tuesday afternoon.

The following foodservice facilities underwent safety inspections in the past few weeks:

A father's dedication to the community inspires his son to follow in his footsteps:

What Juneteenth means to Morganton residents

Who is ready to compete in one of the muddiest events of the year?

Local residents gathered on the front lawn of First Baptist Church of Morganton for the 2021 Burke County National Day of Prayer service on Thursday, May 6.

An honor guard presents the colors at the Burke County National Day of Prayer service.