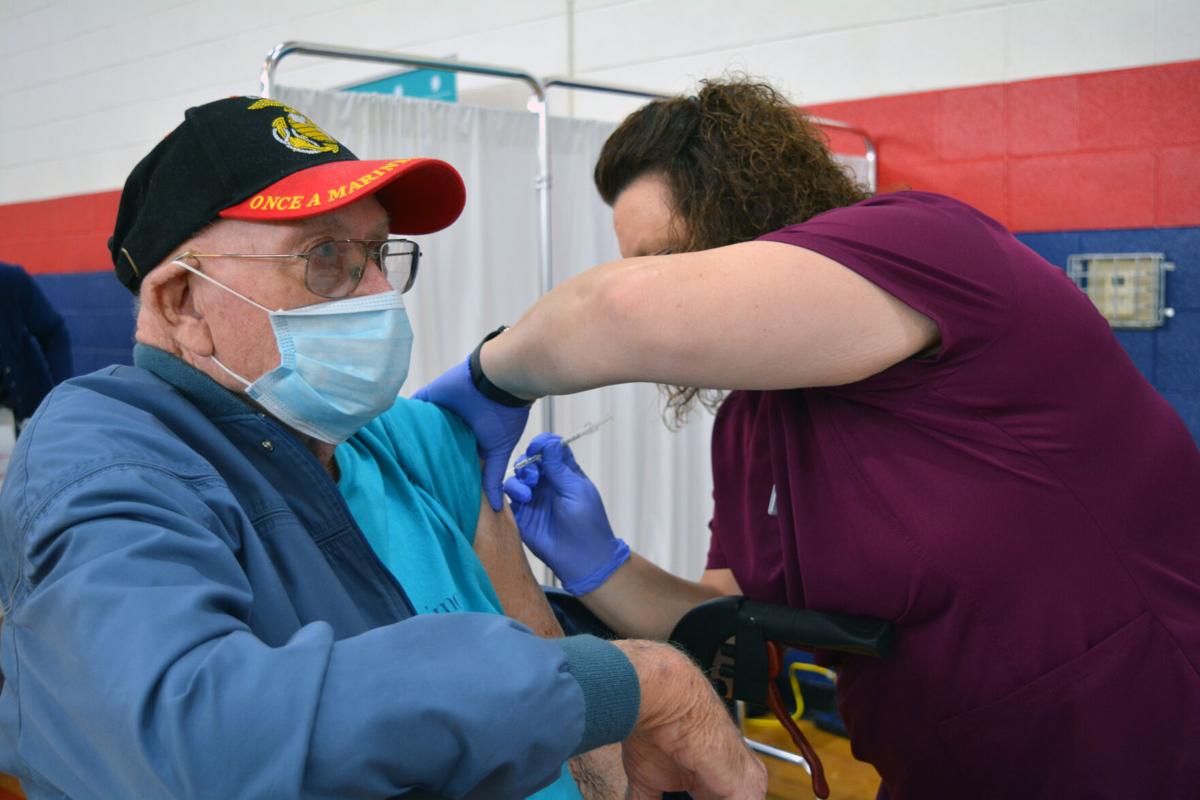 "80-years-old and compromised, yes, I was very excited," said Michael Hartley (left) a few minutes after getting the first round of his COVID-19 vaccine Friday at Freedom High School. 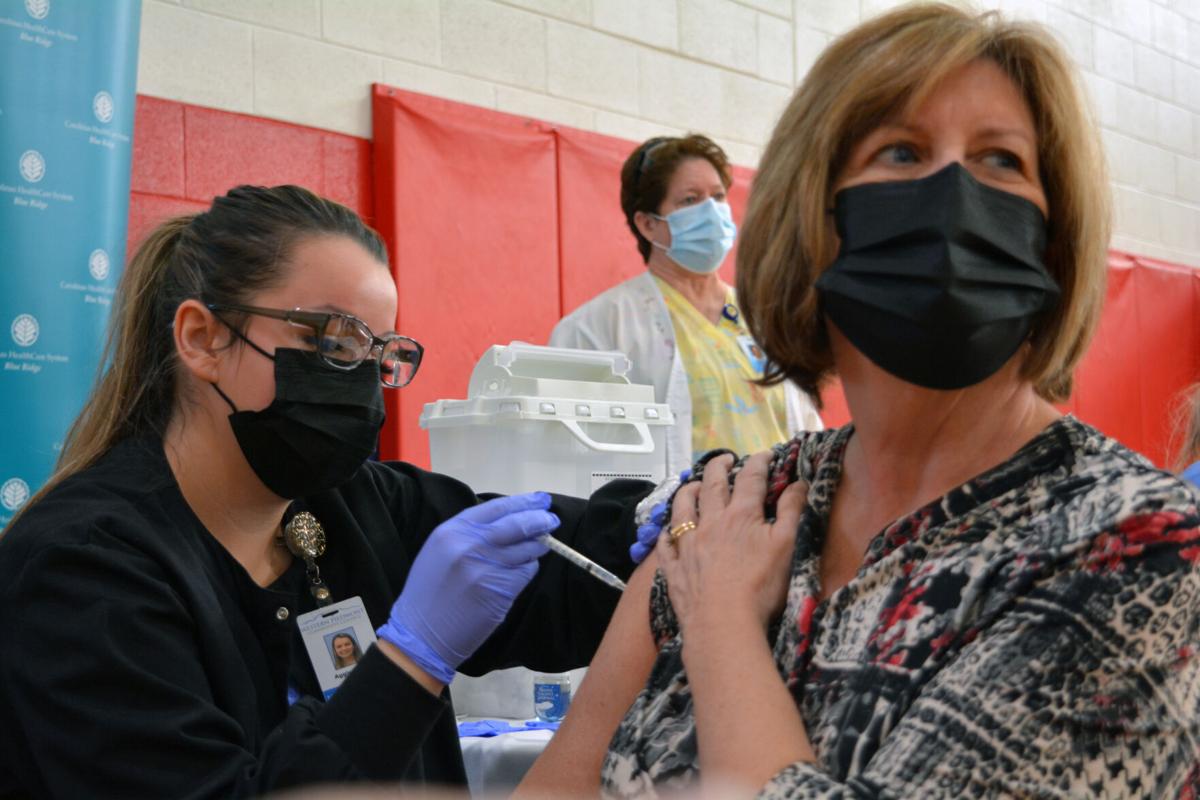 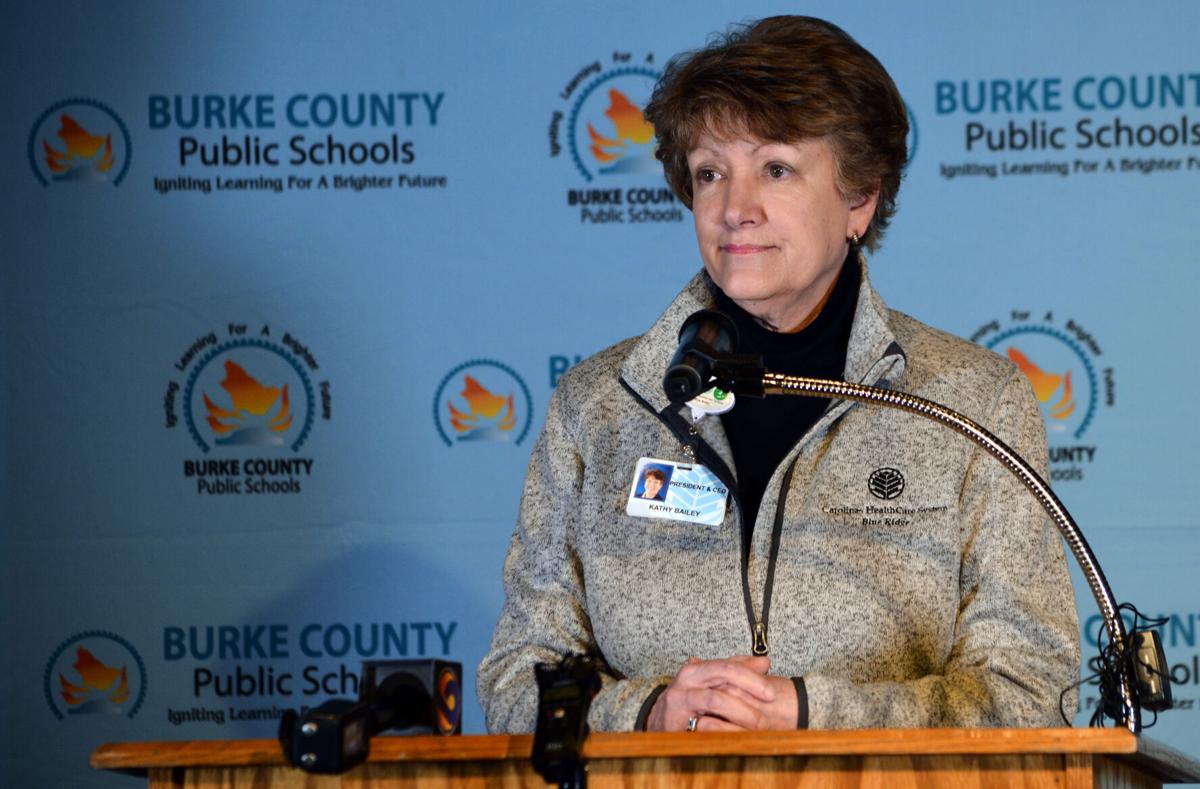 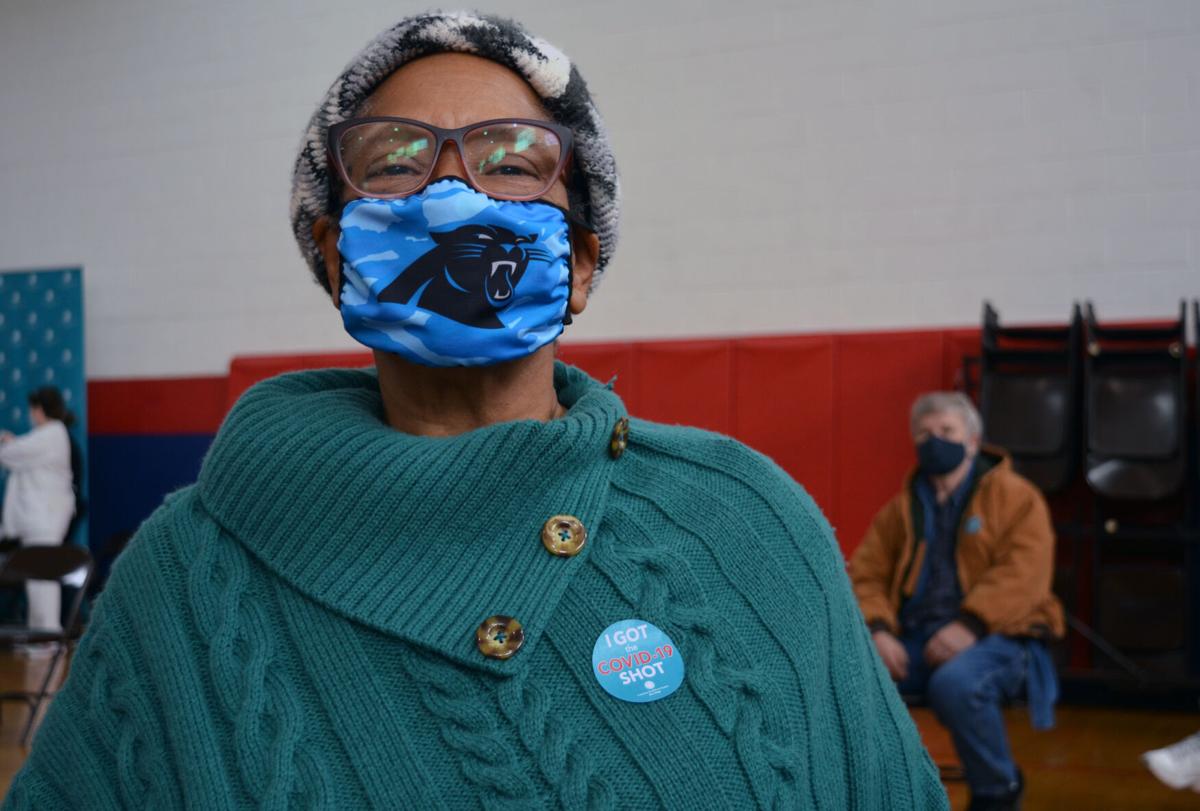 Shelia Avery proudly shows her "I got the COVID-19 shot" sticker after getting vaccinated Friday. She said she was looking forward to gathering with her family in-person again. 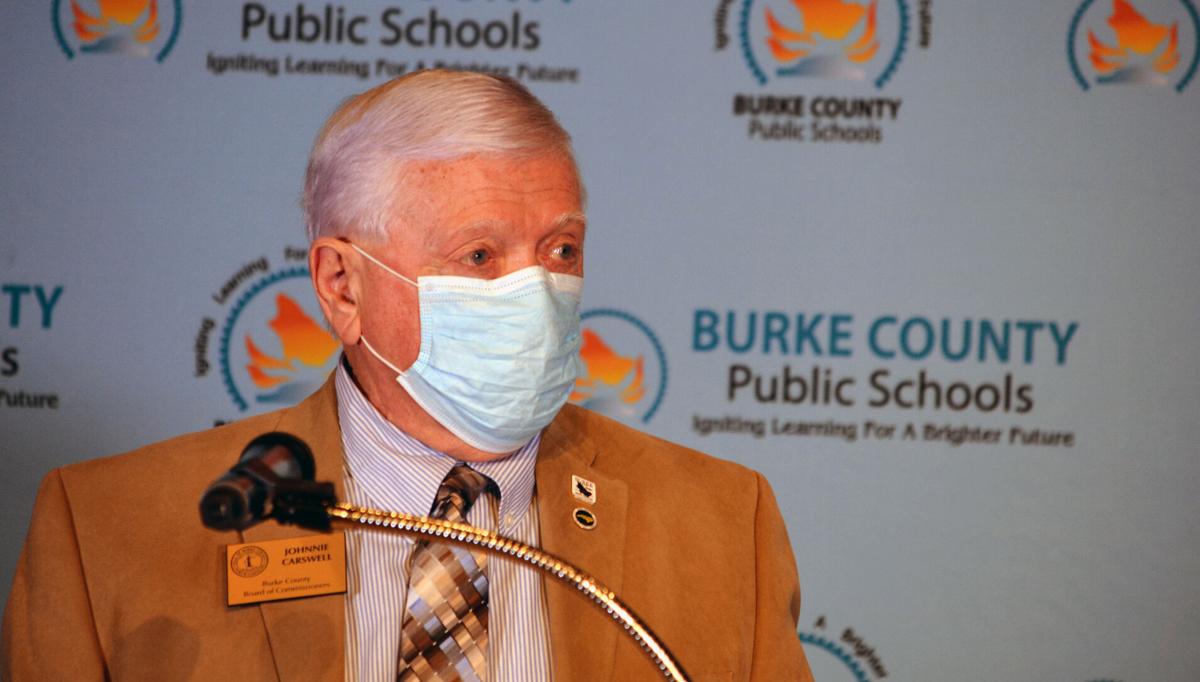 County Commissioner Johnnie Carswell spoke about the number of doses of the vaccine that have been available in Burke County so far during a press conference Friday at the Burke County Health Department. 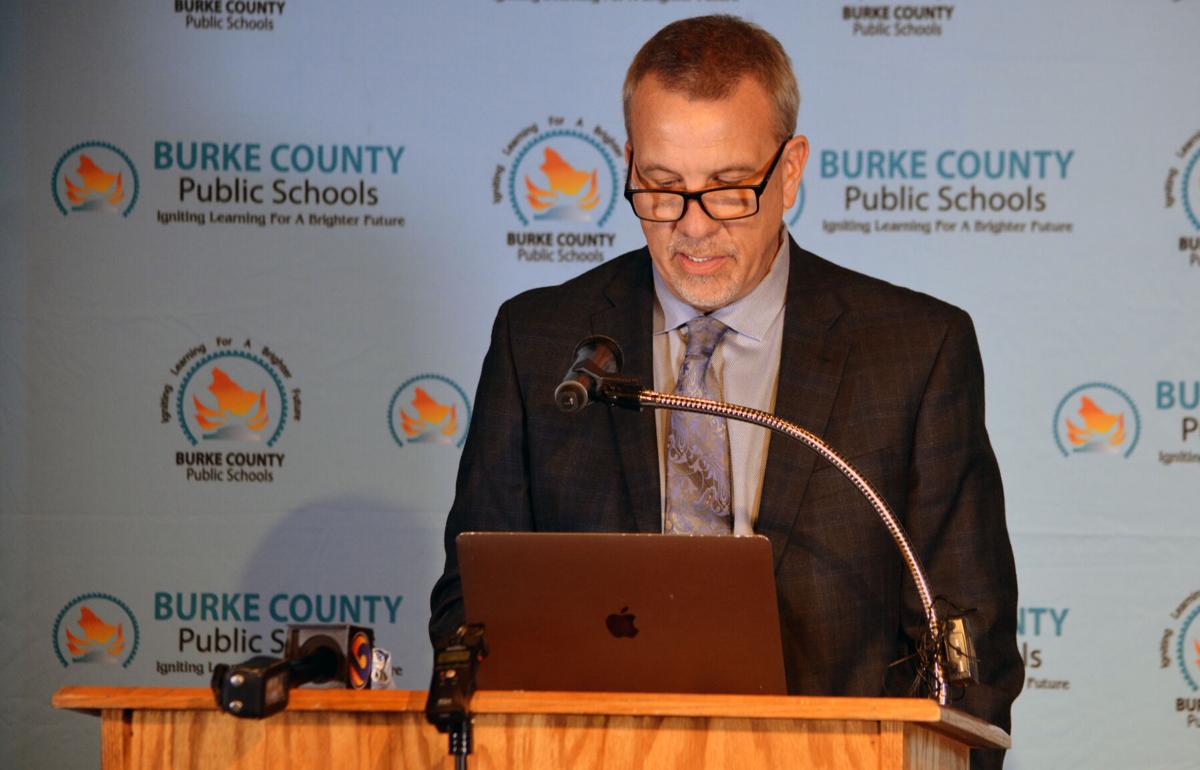 Dr. Larry Putnam, superintendent of Burke County Public Schools, looks down to his notes at a press conference Friday.

Last week was a frustrating one for the public and health officials alike as vaccine distribution continued.

Community leaders joined together in the theater at Freedom High School early Friday morning to hold a press conference addressing some of the concerns and frustrations that many have expressed over the vaccination process in Burke County.

“We apologize for the long holds, the dropped calls, and, at times, not being able to speak to a live person,” said Kathy Bailey, president and CEO of Carolinas HealthCare System Blue Ridge. “And we’ve all experienced this kind of frustration, but not with something as important as a life-saving vaccination. We recognize how important this is to our public.”

Bailey said that the hospital has put in a lot of work to get the concerns addressed.

“We’re working as fast as we can to address the issues surrounding these phone calls,” she said. “We want the public to know that we are getting thousands of calls at once. For example, this week, we received 23,000 phone calls in one two-hour period.”

She said adjustments and improvements have been made, and additional staff have been brought in to help handle phone calls that are coming into the call center. She also told reporters that CHSBR is working to get some sort of online registration element up and running.

Other counties are calling CHSBR to ask about how it is hosting vaccine clinics because they are going so well, Bailey said.

The News Herald asked a CHSBR spokesperson for a clarification on which counties were calling for advice, but did not receive a response by press time Saturday.

CHSBR’s call center is making appointments for vaccines on a weekly basis, something Bailey and other leaders like Rebecca McLeod, director of the Burke County Health Department, attributed to the uncertainties on how many doses of the vaccine each entity in the county will get each week.

“It’s not about how many people we have answering the phone calls,” Bailey said. “It’s about how many appointments we can make based on the vaccines that are allocated to us by the state.”

McLeod said that it wasn’t until around 10 p.m. Thursday that the county was notified the health department and the hospital each would get only 200 new doses of the vaccine.

The hospital also is set to receive another 975 doses to finish out the vaccine series for those who already have received their first dose of the vaccine.

Moreover, the county has received fewer than 7,000 doses of the vaccine so far, said County Commissioner Johnnie Carswell.

Only 1,200 doses have made their way to the county health department since the start of the vaccination process.

“We’ve administered those doses,” Carswell said. “It is a slow, slow process.”

It’s a work in progress, with changing guidelines on which groups should be prioritized in the vaccination process, he said.

“It’s a process, and we appreciate the people of the county hanging with us in this process,” he said. “It will work, it’s just going to take some time.”

Vaccine appointments in Burke County can be made by calling CHSBR’s Community Vaccine Call Center at 828-358-4454 Monday through Wednesday from 8 a.m. to 4:30 p.m.

Residents don’t have to limit themselves to getting vaccinated in Burke. They can get the vaccine anywhere in the state that they can get an appointment.

How are vaccine doses distributed?

McLeod took some time Friday to explain how the doses end up at each of the counties.

First, she said, the federal government doles out vaccines to each of the states. The states then determine how many doses of the vaccine each county gets.

McLeod said North Carolina has been sending the vaccine to entities based on storage capacity, the number of COVID-19 cases and supplies.

But there has been a deficit from the beginning on federal allocations.

The hurdle vaccine providers currently are working through is getting all of their on-hand doses of the vaccine in people’s arms by end-of-business Monday, McLeod said.

If that doesn’t happen, the state and different providers could be penalized, she said.

That won’t be a problem for Burke County, though.

“[Doses will be used] in Burke County,” McLeod said. “It will. Due to the community clinics that we’re running here and helping with the hospital, and to the limited one we’re doing with the 75-plus at the health department.”

But since doses will be gone by Tuesday, that means vaccine appointments can’t be scheduled in the long-term, she said. Entities don’t receive their weekly shipments until the Tuesday or Wednesday after they were notified of them, McLeod said.

While this might be the first mass-vaccination event in our lifetimes, McLeod said that health officials know what they are doing.

“We just ask that everybody please be patient,” McLeod said. “We are working extremely hard and we know what we’re doing. We’ve had plans, we’ve exercised them, it’s just kind of hard to make a mass-vax plan work with not a lot of doses in the county.”

She said everyone who wants a vaccine will get one, it will just take some time.

Doses of the vaccine are administered to the public at vaccine clinics like the one held Friday at Freedom High School.

Dr. Larry Putnam, superintendent of Burke County Public Schools, said he was impressed with how quickly the vaccine clinic came to life at the school, which happened in fewer than 10 days of reaching out to CHSBR about hosting the clinic.

Putnam likened the process of mass-vaccinations to growth spurts.

“We are growing, changing, which is a form of learning,” Putnam said. “I’ve said over the last 10 months that we are doing work that we’ve never done before. And though the patience may be thinned and opinions abundant and tempers flared, it is the reason your community leaders are here today, working together, just like we have prior to this pandemic.”

“I believe it is in times of crisis that we see a community’s true colors, and Burke County’s colors have shone brightly since March 2020 when the COVID-19 pandemic first hit Burke County,” he said.

With help from a caring staff, a local couple celebrated 72 years of marriage recently when the husband was a patient at Mission Hospital McDowell.

"80-years-old and compromised, yes, I was very excited," said Michael Hartley (left) a few minutes after getting the first round of his COVID-19 vaccine Friday at Freedom High School.

Shelia Avery proudly shows her "I got the COVID-19 shot" sticker after getting vaccinated Friday. She said she was looking forward to gathering with her family in-person again.

County Commissioner Johnnie Carswell spoke about the number of doses of the vaccine that have been available in Burke County so far during a press conference Friday at the Burke County Health Department.

Dr. Larry Putnam, superintendent of Burke County Public Schools, looks down to his notes at a press conference Friday.