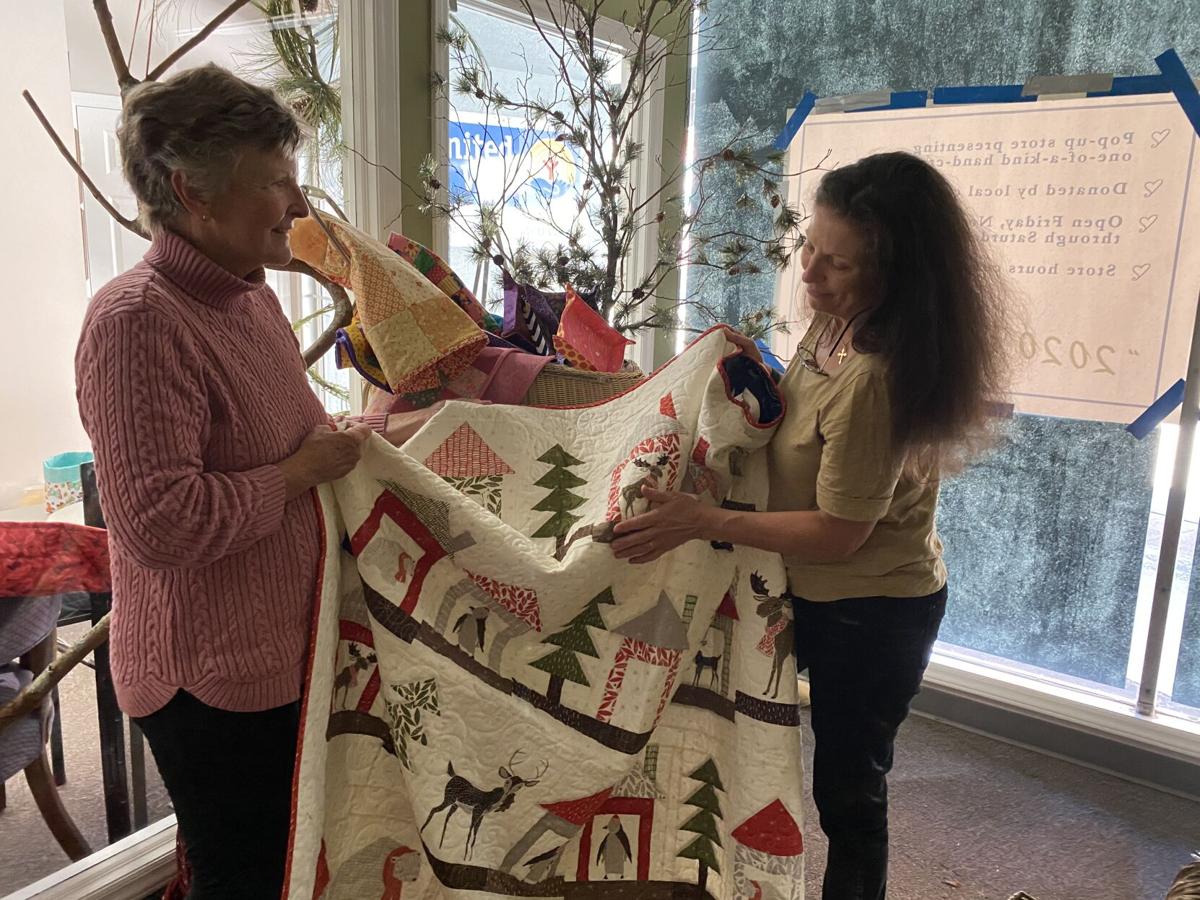 Catherine Turner and Susan Perry, organizers of "2020 with Love," are pictured with a quilt made for the pop-up store. 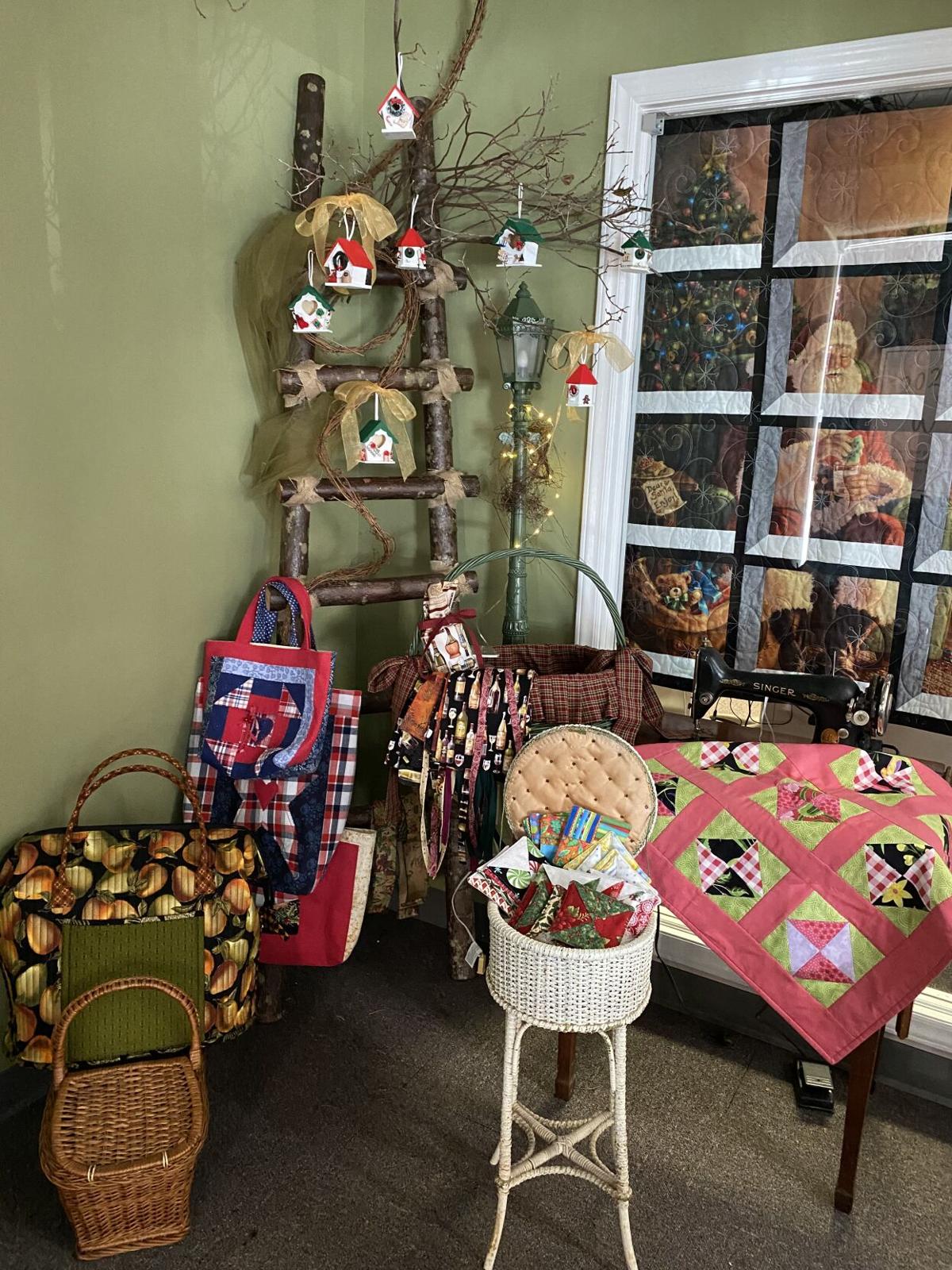 Pictured are some of the items that will be sold in the pop-up store. 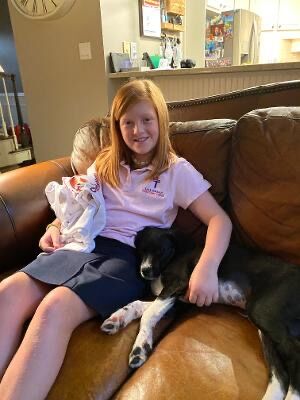 “What the world needs now is love sweet love … Not just for some, but for everyone.”

Recently, these words filtered through my mind in a quiet moment.

In a year characterized by news of COVID-19, racial violence and divisive politics, who could argue against “What the World Needs Now is Love,” the opening words of the 1965 hit song with lyrics by Hal David and music composed by Burt Bacharach.

The song’s message and melodious mandate for sweet love, that there is just too little of, was written in the deeply divided era of the Vietnam War and civil rights movement. Yet, it helped bring people together in the unity of love.

Many versions of “What the World Needs Now is Love” can be found online. I offer no apology that after listening, you may have the song happily humming in your head for the rest of the day.

Fifty-five years later, the song’s sentiment continues to strike a chord. Two inspiring video recordings were made in 2020, one by the soulful band Tank and the Bangas, and one a virtual orchestra and chorus of students and alumni from Boston Conservatory at Berklee, created by Shelbie Rassler.

We are each free to be love in the world.

“The way of love is how we stay decent during indecent times,” said Episcopal Bishop Michael B. Curry in his new book, “Love is the Way: Holding on to Hope in Troubling Times.”

“It’s for all of us who are sitting, looking around at the world, at our leaders, saying, ‘Something has gone very wrong.’ It’s for those who are fighting hard for a better world, and feeling lonely and defeated and very, very tired.”

Some people are putting love into action to make a difference in Burke County.

The phrase “2020 with Love” came to Lake James resident Catherine Turner in the middle of a summer night in 2019. It was an answer to prayer.

Armed with the gift of a sewing machine, a new passion for quilting and resurgence of creative energy, she wondered if there was something she could make to help with the needs of our community.

The who, why or when remained fuzzy until the concept of “2020 with Love” as a creative fundraising effort emerged. Catherine had previously served on the board of directors for the Burke County United Way and was familiar with its support of local community agencies.

“BCUW certainly deserves a financial blessing,” said Catherine. “And now this year especially, since their main fundraiser was cancelled due to COVID.”

In September 2019, Catherine set a goal to raise $15,000 and drafted a proposal explaining the concept of a pop-up store and how it would work. A pop-up store is temporary retail space, open for a limited time. When her proposal was approved by the BCUW board of directors, plans for “2020 with Love” as a holiday store at the United Way office on West Union Street was officially launched.

Catherine enlisted the help of her friend and neighbor, Susan Perry. The two quickly reached out to other crafters and artisans. The response has been tremendous.

Many handcrafted items have already been donated. I stopped by the United Way office last week to talk with Catherine and Susan as they set up the pop-up store, scheduled to open the day after Thanksgiving.

Susan showed me bin after bin bursting with beautiful quilted table runners, baby quilts, coasters, placemats, tote bags and other items. She has been sewing for months creating inventory for the pop-up store. Susan’s philosophy is simple and has served her well in all the places she has lived, “If you live here, you give here.”

Her 9-year-old granddaughter, Maddy, also has a heart to help and created small hand painted ornamental bird houses to donate.

The spirit of “2020 with Love” has spread to other crafters and artisans. The donated items are spectacular in quality and design.

“2020 With Love is simply a different way to give,” Catherine explained. “Each item is hand-made, hand-crafted or hand-embellished and donated to be sold as inventory for the pop-up store. One hundred percent of the price of each item sold (before sales tax) goes directly to BCUW.”

They are also hopeful for monetary donations to help them reach their goal.

That’s the power of love. It’s the only thing that can, and that ever will, make the world a better place.

Janice Krouskop is a member of the Morganton Writers Group.

2020 with Love is unique pop-up store where local artisans have joined hands to help Burke County United Way as they help our community. People will have the opportunity to purchase one of a kind hand-crafted gifts donated by local crafters and artisans in the store from Friday, Nov. 27 through Saturday, Dec. 19. Store hours will be announced at a later date. The store will be located in the BCUW office at 121 West Union Street in Morganton. For more information, contact 828-433-0681 or visit www.bcuw.org.

Nonprofit and community agencies across Burke County are gearing up for the Thanksgiving holiday next week.

“I felt like I was suffocating in my own body," said Chelsea Mackenzie on her COVID-19 symptoms. "I couldn’t make it to the kitchen. I couldn’t even hardly make it out of my bedroom.”

It doesn’t look like COVID-19 is going anywhere in Burke County, with 55 new cases of the virus reported Wednesday.

Organization changes up annual toy distribution due to pandemic

Foothills Farm and Art has a new manager, and she’s setting her sights on adding new vendors to the Morganton-based online hub.

Catherine Turner and Susan Perry, organizers of "2020 with Love," are pictured with a quilt made for the pop-up store.

Pictured are some of the items that will be sold in the pop-up store.