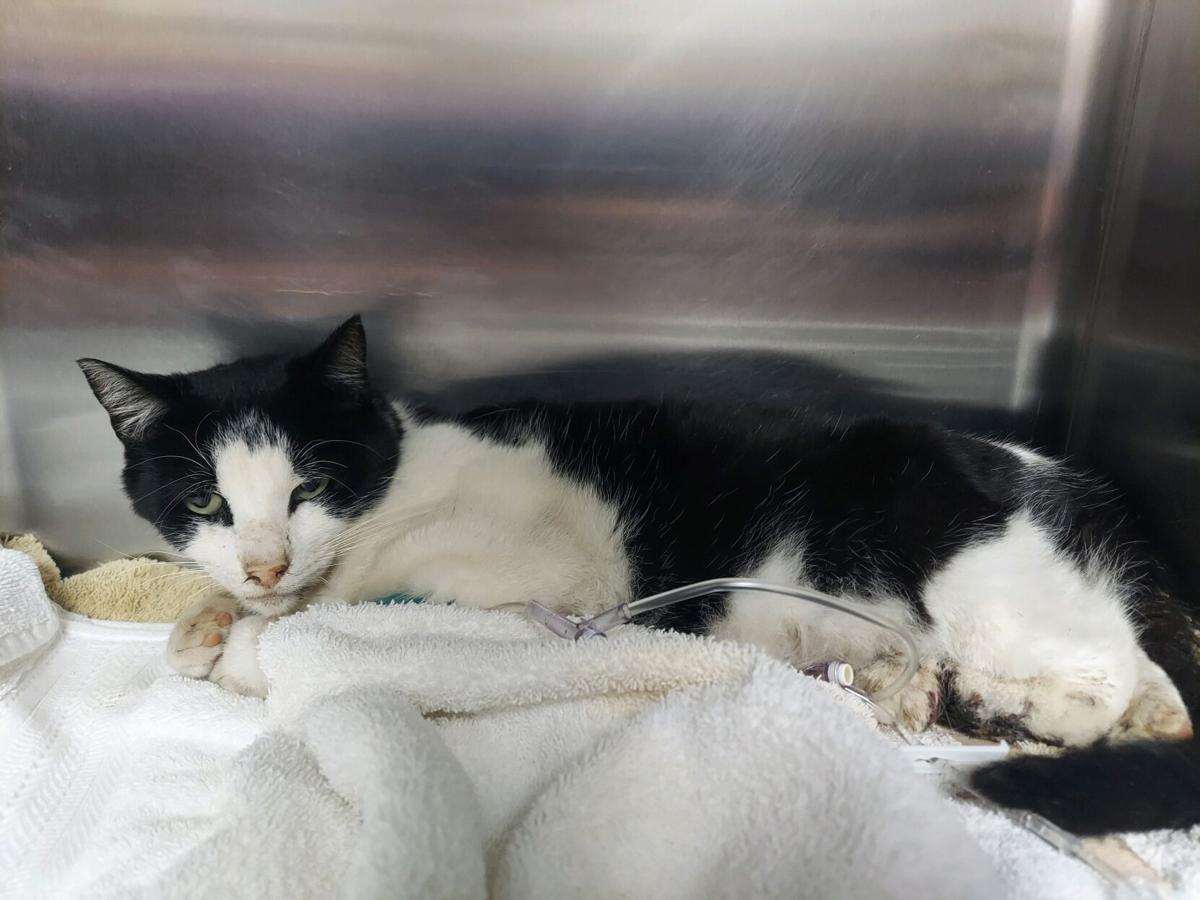 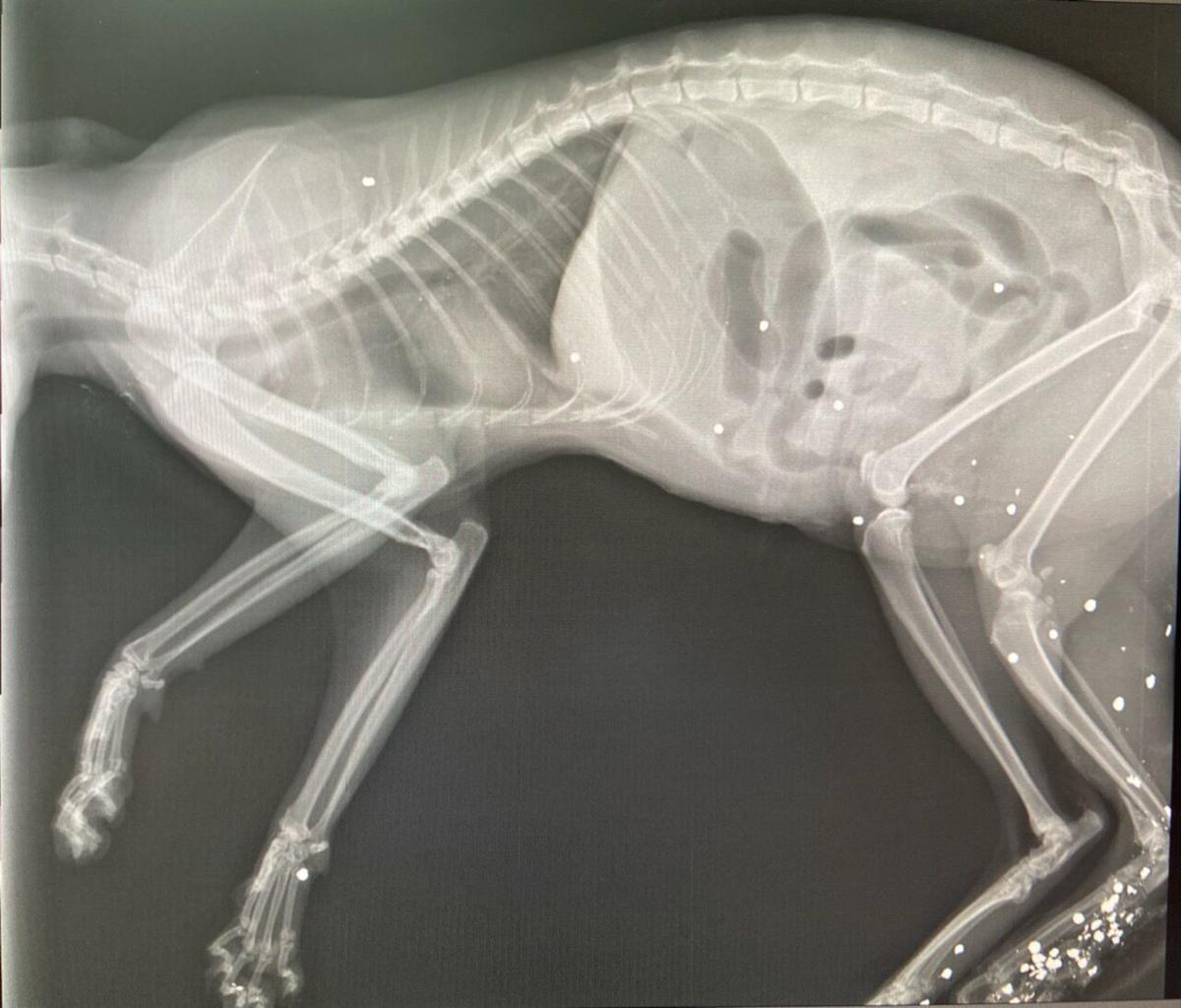 An X-ray of Mr. Tuxedo shows buckshot scattered through his lower body. 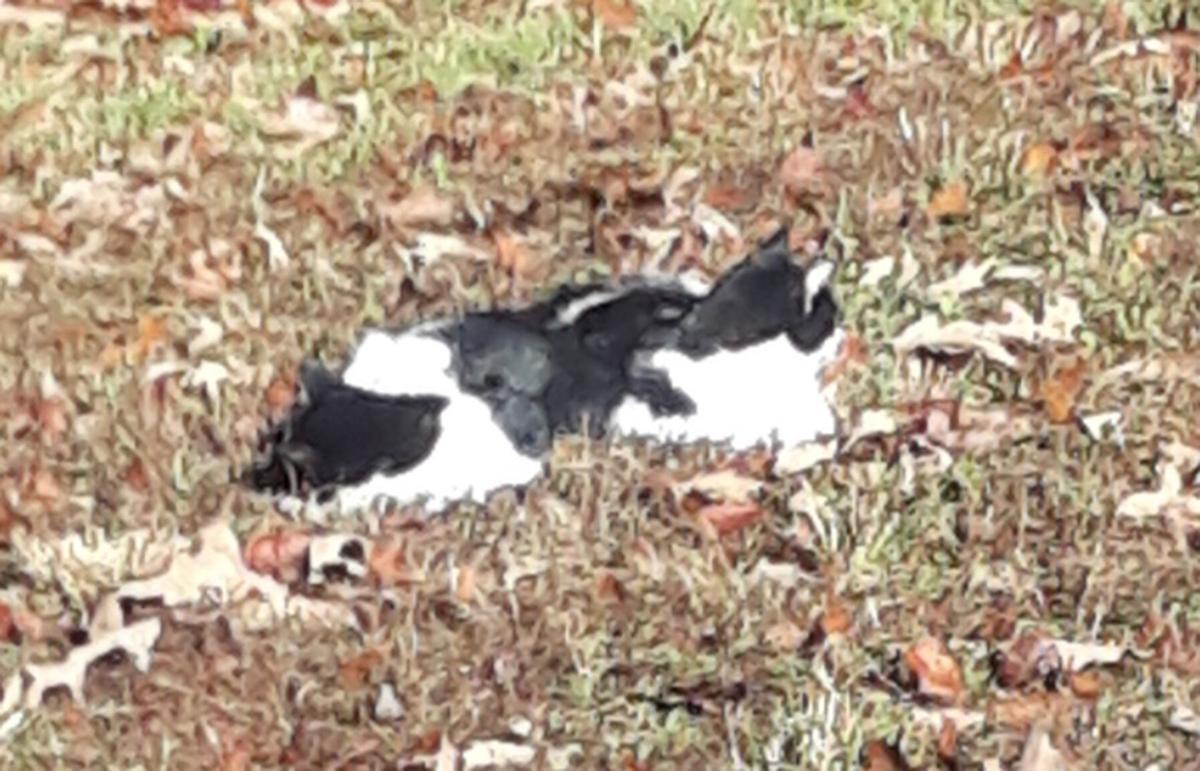 Mr. and Mrs. Tuxedo lay together in Robert Goodwin’s yard.

Robert Goodwin, who lives on Davis Drive in Valdese, said it was the night of Nov. 21 that he heard a shotgun go off near his home.

He didn’t think much of it and went to bed. But for the next two days, Mr. Tuxedo, one of his cats, didn’t show up for his meals.

When he opened his front door Nov. 24, Mr. Tuxedo was laying on the front porch, in shock, with his back leg limp behind him. He didn’t usually like to be held, but he let Goodwin pick him up that morning.

He and Lynda Garibaldi, founder of Cat’s Cradle, spent that morning trying to get an appointment at a veterinarian’s office. They got Mr. Tuxedo an appointment with Dr. Tom Wallrichs at the Animal Hospital of East Burke that day.

Goodwin initially thought Mr. Tuxedo may have been hit by a car. As it turned out, though, Mr. Tuxedo’s hind end was riddled with buck shot.

Everyone was hopeful that Mr. Tuxedo would survive, though it was expected one of his legs would have to be amputated.

But Nov. 26, Goodwin got the call that Mr. Tuxedo had died from his injuries.

“It threw me into left field, way out there,” Goodwin said. “It was horrifying.”

Mr. Tuxedo’s death took a lot out of Goodwin.

“It just took a big chunk out of me,” Goodwin said. “That’s part of my family. This set me back big time, that somebody would actually shoot a cat, you know?”

Goodwin has had Mr. Tuxedo and his sister, Mrs. Tuxedo, for about four or five years. They were still kittens when he started taking care of them.

“It’s a sad situation,” Goodwin said. “His sister’s been running around, looking for him, waiting on him and all that. They were inseparable in that way.”

The town of Valdese’s animal control officer conducted a full investigation into the shooting, said Valdese Police Chief Jack Moss, but with no witnesses, no confessions and no way to prove who shot the cat or if he was even shot in town limits, there was no one to charge.

All of the neighbors in the area were reminded that animal cruelty is a felony in North Carolina, especially as it pertains to shooting an animal that does not pose a threat to the shooter, Moss said. They also were reminded that it’s illegal to fire a gun in town limits.

Garibaldi said she was appalled that someone would shoot a cat.

“Cats are living creatures and they have a right to survive just like any other animal,” Garibaldi said. “I’m sure there are people who shoot anything, but I don’t understand abusing cats just because they’re on your property or they annoy you or they just happen to show up. I just don’t understand that.”

She said it was cruel to shoot a cat.

“That is uncivilized, it’s inhumane, it’s cruel, it’s inexcusable,” Garibaldi said. “And someone is brokenhearted because his cat is the one that was shot and killed.”

Cat’s Cradle covered veterinary costs for Mr. Tuxedo. To learn more about the rescue and ways to donate online, visit thecatscradle.org. Donations by check can be mailed to P.O. Box 1915, Morganton, NC, 28680.

Man shot, killed by deputies in Caldwell County, another found dead on the property

A Morganton man is facing a secret peeping charge.

A Lenoir man wanted for murder was arrested Wednesday evening in Morganton.

The following mug shots are taken from the top bond amounts from the week of Nov. 21-27:

The chief of the Morganton Department of Public Safety will retire on March 1.

The search for a man missing since Jan. 4 still is on, and authorities said he might be trying to visit areas from his past.

The man was arrested on Christmas Eve after he was discharged from a local hospital. According to a police report, a doctor said the man was coherent and capable of walking and standing when he was discharged, but that he was "playing games" when he refused to get out of bed.

An X-ray of Mr. Tuxedo shows buckshot scattered through his lower body.

Mr. and Mrs. Tuxedo lay together in Robert Goodwin’s yard.