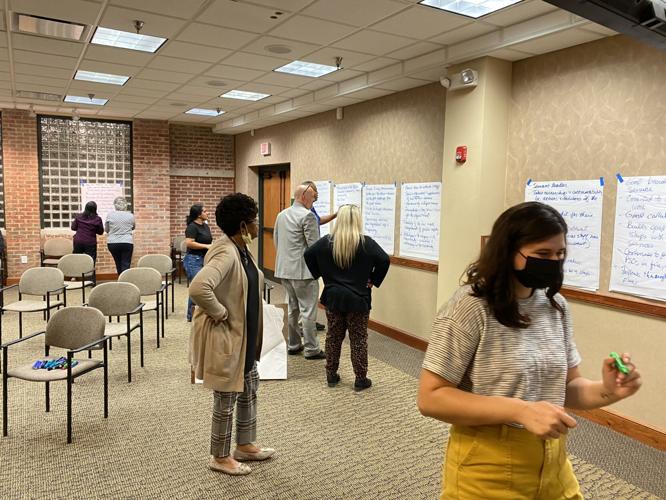 Residents decide which traits they think should be the top priority in the next chief of the Morganton Department of Public Safety. 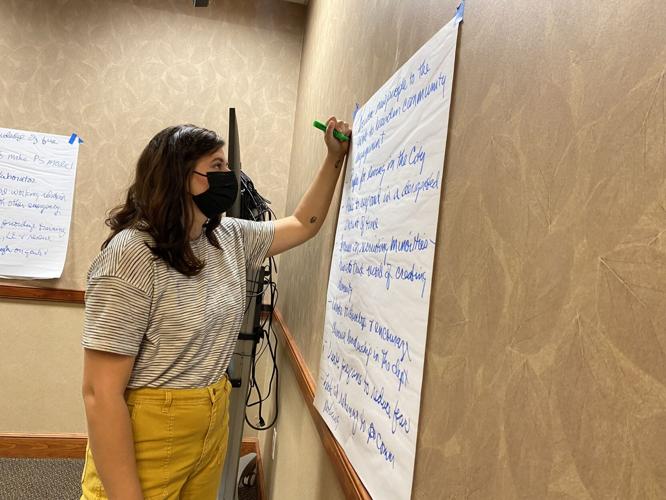 A woman makes a check next to a trait she thinks should be a top priority for the next chief of the Morganton Department of Public Safety.

Community members took to the Council Chambers at Morganton City Hall on Tuesday to voice their expectations for the next chief of the city’s department of public safety.

The input came after the city asked residents to attend a public forum, facilitated by Becky Veazey of the Management and Personnel Services group the city contracted with to help identify the right candidate for the city’s top law enforcement and fire position.

The city will take applications for the position, which has been advertised with the International Association of Chiefs of Police, until they have a deep pool of applicants.

Staff then will send out supplemental applications to some of the applicants, Veazey said, followed by interviews with candidates for the position to narrow the pool down to a handful of candidates. Those candidates then will be invited to go through the assessment center, which Veazey explained is a process, not a place.

The assessment center will see candidates work through a variety of situations to simulate what a real day in the life of the public safety chief may look like. Examples Veazey provided include interviews, role play, press conferences, dealing with an upset resident or dealing with a performance issue in the department.

While those candidates are participating in the scenarios set up by the assessment center, a panel of assessors will be watching their actions and rating how the candidate handled the situation.

Assessors will use dimensions determined through meetings like the one held Tuesday and other meetings that have been held with city employees, including public safety officers and firefighters.

For the public meeting Tuesday, about 20 people turned out to give their input on what they’d like to see in the next chief.

Veazey wrote traits the attendees listed during the meeting on large paper tablets before hanging those sheets on the wall. When about 10 sheets were filled up, each attendee was given a marker and asked to select their top seven traits.

The top traits, in order of popularity among Tuesday night’s attendees, were:

Once assessors have rated each candidate, they must come to a consensus on each candidate, writing down which behaviors they believed to be effective and which were ineffective.

Feedback from the assessors also is given to the candidate selected for the position so they can find out what they need to work on to do the best job possible.

Rus Scherer, the city of Morganton’s human resources director, said the city hopes to have the position filled this summer.

HICKORY — Investigators seized nearly 5 pounds of methamphetamine and more than 800 oxycodone tablets during a search of a home Tuesday, accor…

A statewide staffing shortage of about 200 troopers has North Carolina State Highway Patrol recruiters getting creative to find candidates.

Residents decide which traits they think should be the top priority in the next chief of the Morganton Department of Public Safety.

A woman makes a check next to a trait she thinks should be a top priority for the next chief of the Morganton Department of Public Safety.