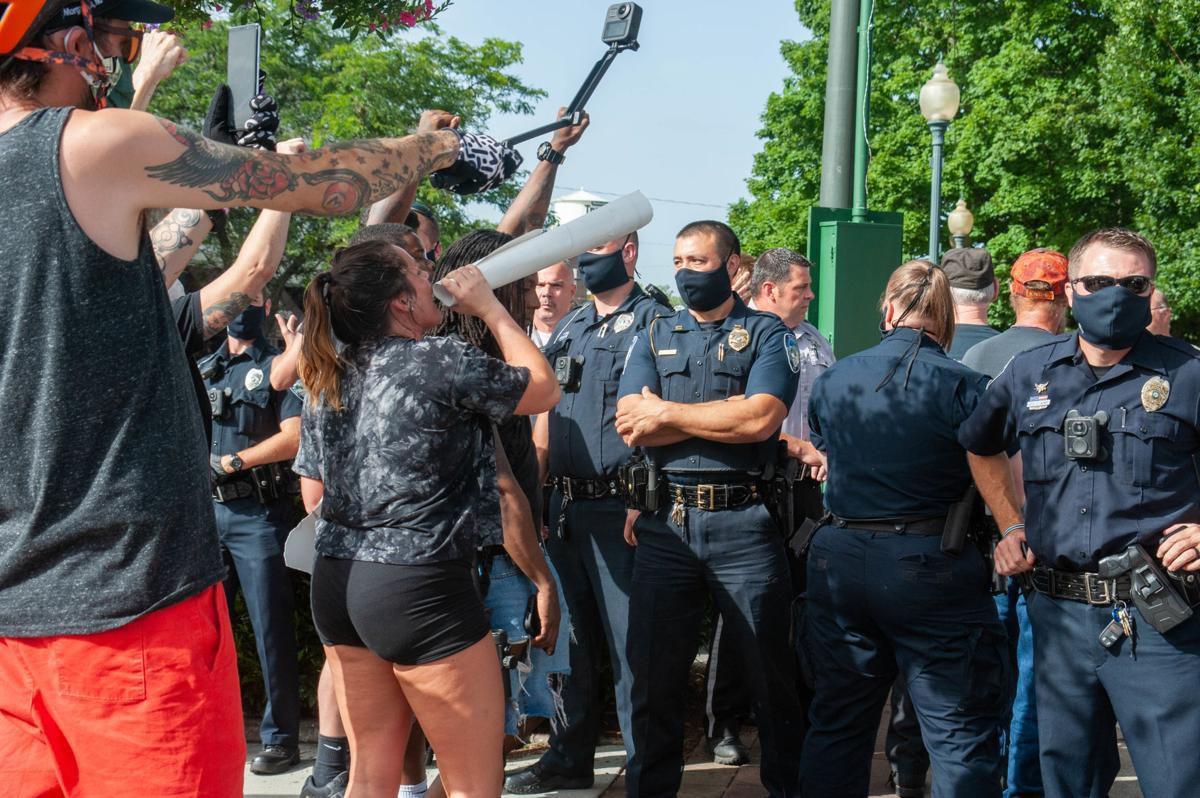 Officers stand in a line between protesters Saturday on Morganton's Historic Courthouse Square. 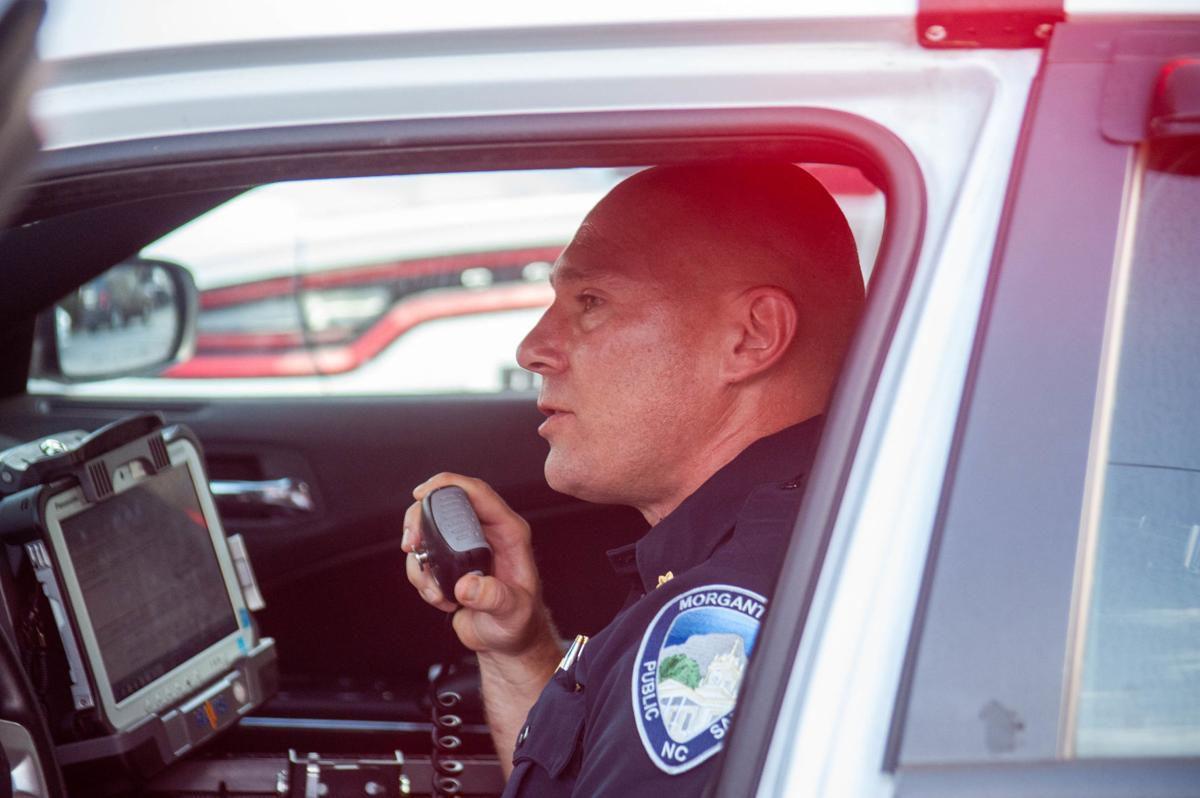 There were about 80 law enforcement officers at Morganton’s Historic Courthouse Square on Saturday after protesters clashed over the city’s Confederate statue.

Residents arrived at the square armed to protect the statue after a rumor circulated on social media that a group planned to tear it down.

But Maj. Ryan Lander with the Morganton Department of Public Safety said Saturday that he contacted local, state and federal authorities about the rumor and none of them had any intel to confirm it.

While Lander couldn’t confirm where the rumor originated, some have suggested it stemmed from a plan to take down a statue in Fayetteville that sat at the intersection of Morganton Street, East and West Dobbin Avenue and Fort Bragg Road.

The Fayetteville Observer reported Monday that a statue there was removed Saturday by its owners and placed into storage.

Again, Lander couldn’t confirm that event was the cause of the rumor that drew a crowd to the square Saturday.

But this isn’t the first time rumors have gone around surrounding the statue. Since protests on the square started ramping up over the last several weeks, there have been rumors about violence in downtown Morganton.

“Everything we’ve had, up until Saturday, was peaceful,” Lander said. “Even with all the rumors circulating around, not only going into Saturday but before, everything had been peaceful and ... conducted in a way that got their message across in a very positive way.”

The News Herald asked Lander about enforcement of North Carolina General Statute 14-277.2, which prohibits dangerous weapons at demonstrations and other events on public property.

“When I got there, I had to think about the overall goal, which was the safety of the public,” Lander said. “And you never know, if I were to go there, based on what I saw, and try to have them put up their weapons, what the result would have been.”

Talking to the people out there, everything seemed peaceful, leading officers to make the decision to let things continue, he said.

“Everybody appeared and seemed peaceful,” Lander said. “Based off of that information, knowing that the weapons that were out there, the available manpower that they had opposed to us, a tactical decision was made in the interest of public safety to, based off of it being peaceful, to try and just monitor the situation like we did.”

And so, officers monitored the situation.

“From what I saw, emotions became elevated to the point that I became concerned for the safety of everybody out there,” Lander said. “That’s when I gave the order to disperse.”

Some have been critical that law enforcement didn’t crack down on the general statute that was being violated, but Lander said law enforcement has to make decisions based on the resources they have.

“It might be easy for people to say that this law needed to be enforced, yeah, that’s one side of it, but you have to look at the resources that you have available with the ultimate goal of public safety in mind, and to get that and to achieve that goal.”

While tensions flared and law enforcement officers did have to stand between the different groups of protesters at times, no one was injured and no one was arrested throughout the incident.

For many, if not most, of the officers on scene, it was the first time they had experienced a demonstration that escalated to that point.

“I’ve never been through anything similar to this, and I don’t know if Chief (Lowdermilk) has but I’d be willing to say he hadn’t either up to this level,” Lander said. “It was new for a lot of people, if not everybody that was out there.”

Every officer employed by MDPS was on scene Saturday unless they were out of town, and multiple other agencies were called for aid. But that call for aid didn’t come until after Lander thought the safety of counter-protesters might be at risk.

“With police work, you can’t deny people to be out there ... because the event might be controversial or might express an unpopular view,” Lander said. “That’s guarded by the First Amendment ... When you start having counter-protesters out there, and ... their safety might be at risk, that’s what I noticed and that’s when I started calling people in and calling for mutual aid assistance.”

“That’s one of the nice things, when an agency needs assistance, in this community we’ve always been able to help each other out,” Lander said. “We truly appreciate their assistance on Saturday.”

Lander said some have accused off-duty MDPS officers of attending the event Saturday, but he said that wasn’t true.

“No one that was off duty that is employed with the city of Morganton, specifically the Public Safety Department, participated in that event at the square on Saturday,” Lander said.

Another rumor that was told to The News Herald on Wednesday was that a bus of protesters who were going to pull the statue down was stopped by law enforcement before they could make it to Morganton.

See video of part of the protests at www.morganton.com.

Officers stand in a line between protesters Saturday on Morganton's Historic Courthouse Square.