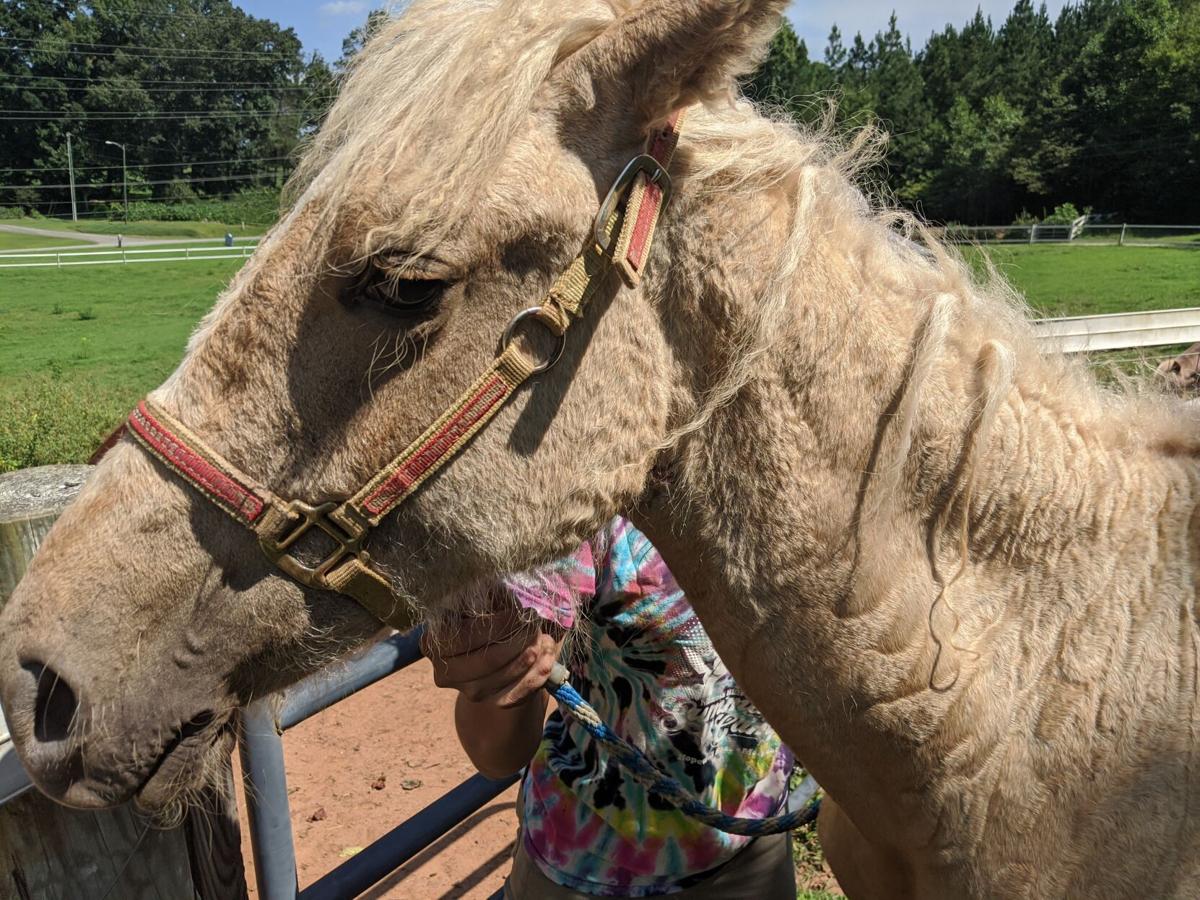 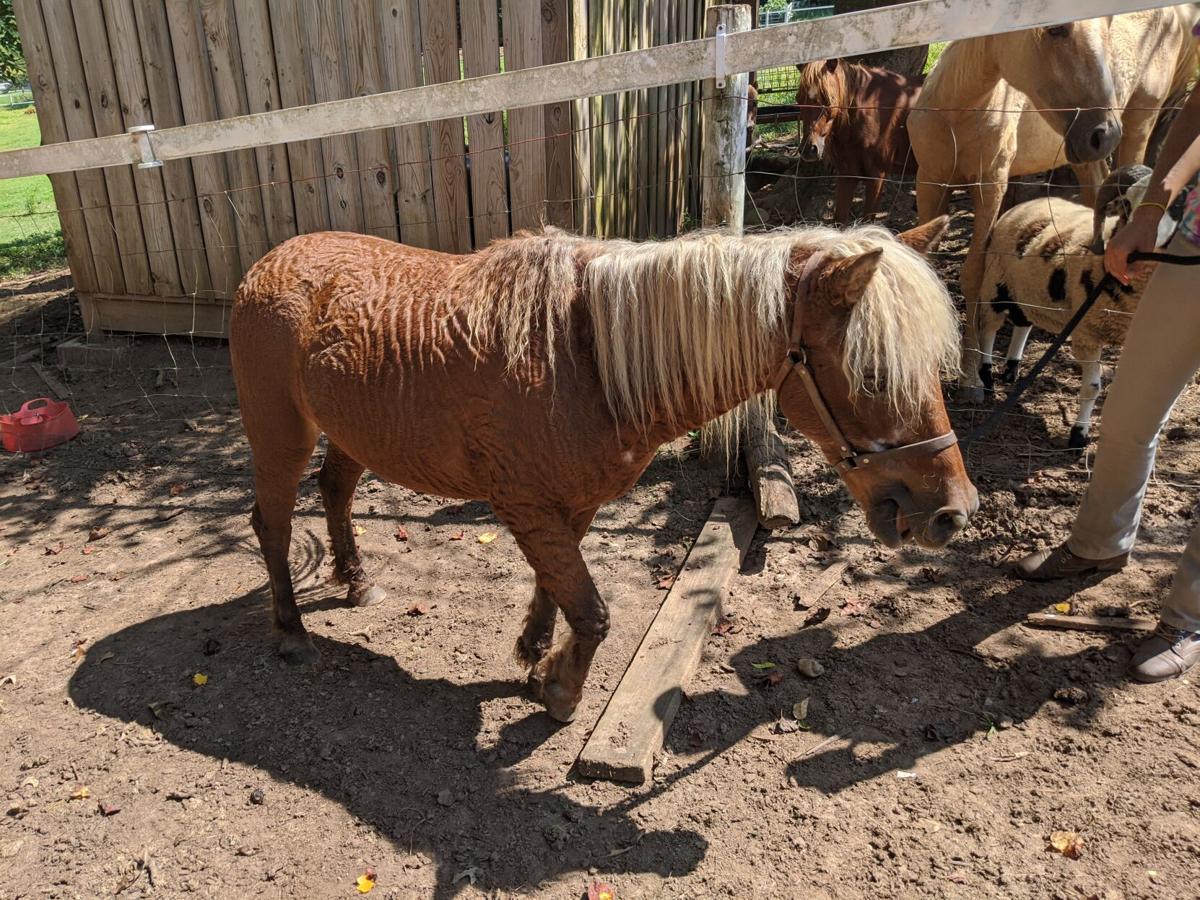 Pumpkin may be small in stature, but she makes up for it with her "crushed velvet" coat characteristic of some curly horses. 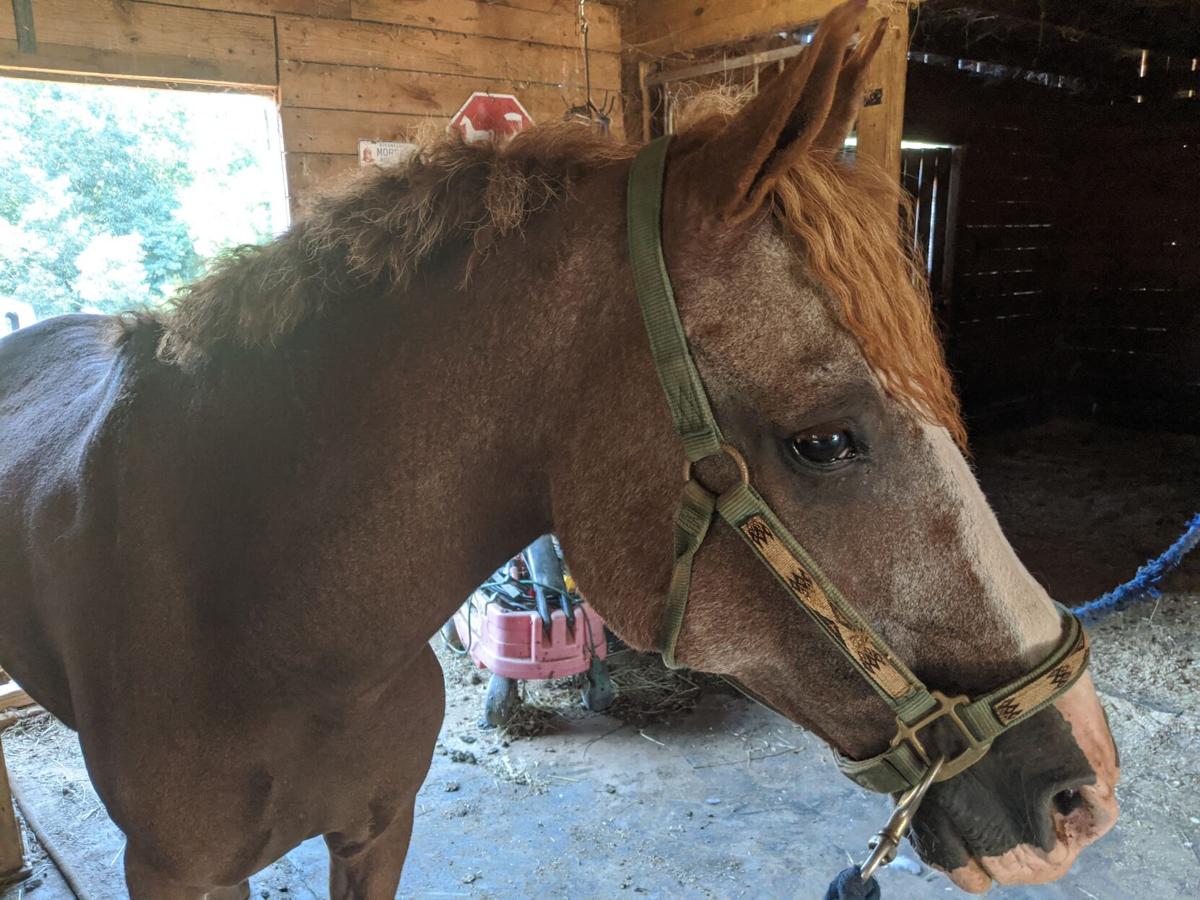 Louie's summer coat is fine and short, but his curly horse traits still show up in his mane. 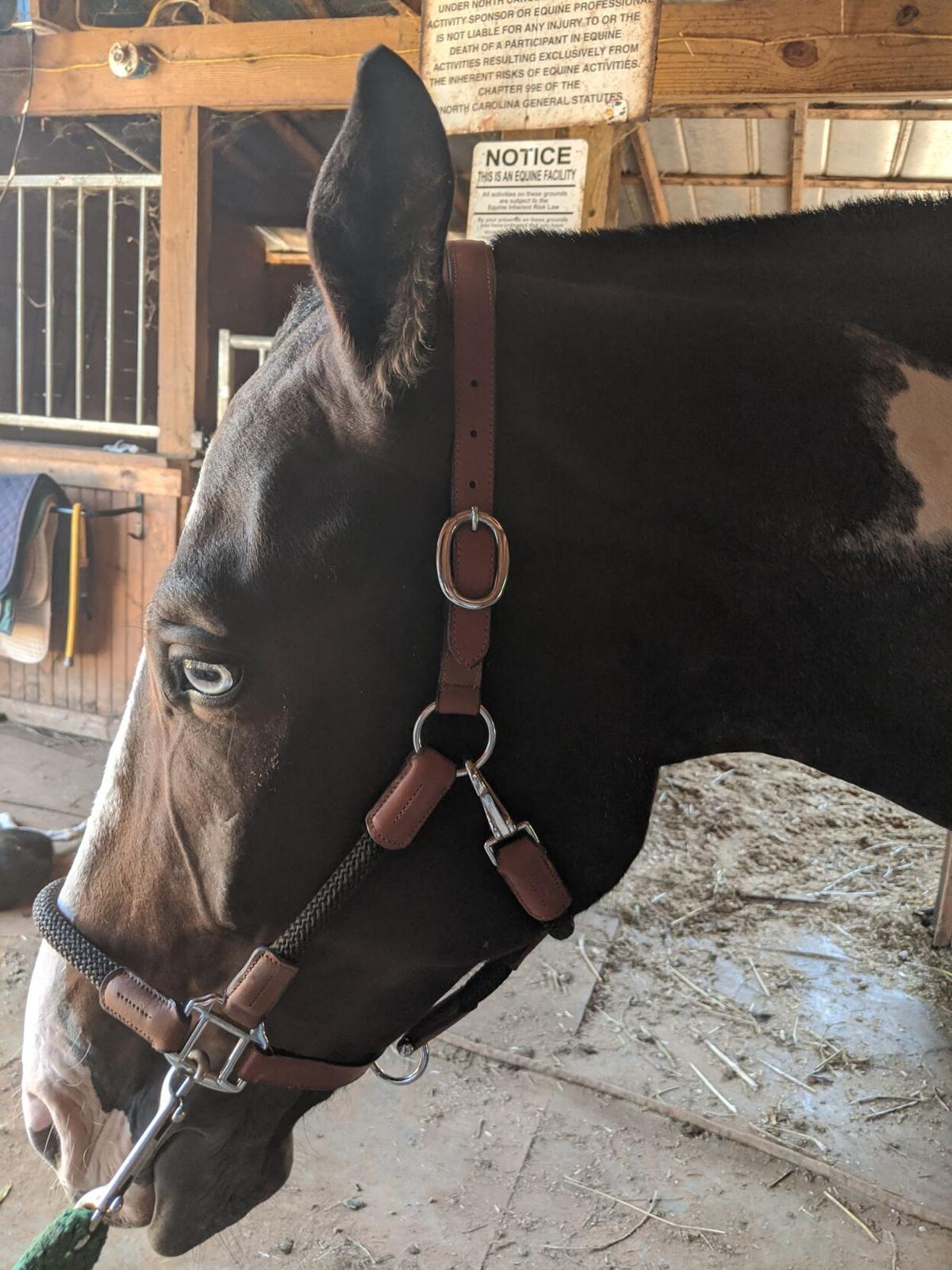 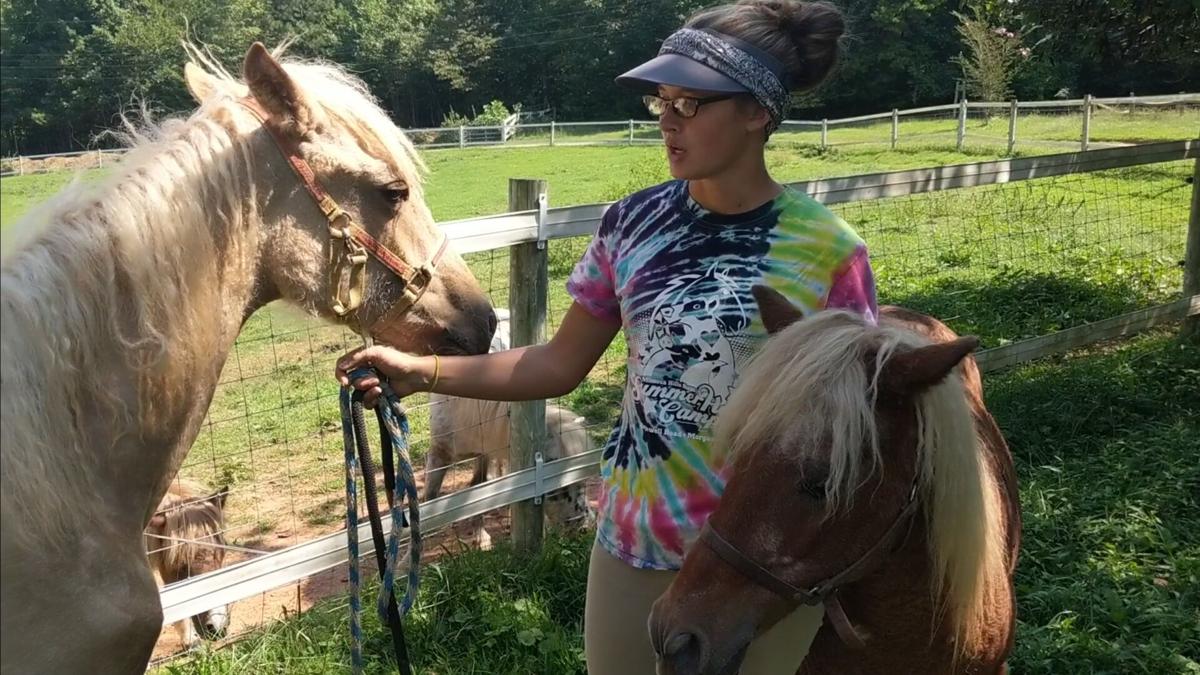 Mimosa Hills Farm owner Crosby Reed talks about curly horses while holding the reins on Shadow (left) and Pumpkin, two of six such equines on the farm.

Imagine a horse so versatile it can tackle almost any task — lessons, trail riding, pulling carriages, jumping, tracking — all while sporting a unique look, fun personality and sharp mind.

If you ask Crosby Reed, it indeed exists.

That animal is the curly horse, equines who express a recessive gene that gives them a signature wavy coat and, just maybe, a knack for being an intelligent jack of all trades. Only about 4,000 of them are in the world, Reed estimates, and of that number, six of them — the math says that’s 0.15 percent — are on her Mimosa Hills Farm in Morganton.

“(Louie, one of Mimosa’s curlies,) is a true example of a curly horse,” Reed said. “He’s super-hardy, he’s never worn shoes. This pony can go on any kind of terrain. I’ve actually used him in the woods when we had a little cow get loose, and he was gone for days. ... He just stayed out there, so I took this little pony and we went and tracked (the cow).

“... As soon as he set his eye on that cow, he followed that cow and tracked it all the way back. They’re really smart like that. He had never tracked a cow ever before, but he kind of knew, ‘This is what we’re after.’ They’re super, super intelligent. They’re a lot more personable, but nobody really teaches them with treats to be personable. They’re just really smart and a lot more likely to figure out how to open gates, get out of their halter, how to let other horses out.”

In that vein, Louie — in addition to having a keen eye — also is a bit of a prankster.

“This one steps on my foot on purpose almost every day,” Reed said.

Friday, another horse on the farm, is Reed’s personal show horse — her favorite horse in the barn and another of Mimosa’s determined curlies, a type of horse that she says, while not necessarily easy to train, can be taught to do almost anything if they put their mind to it.

And that contrasts with most of the horses in the U.S. now that are purpose-bred, Reed said.

“(Friday) is so athletic, and what we call horses like this that turned out so amazingly athletic that nobody bred for a specific purpose, is a ‘freak.’ They just came out so amazingly better than they ever should have been. I have his mom, and I’m going to have her to breed — horses can breed until they’re in their mid-20s if that’s what they’re fit to do.

“But I doubt I’ll ever get (another) one as nice as (Friday) out of her, no matter what stallion I put her to. ... He outgrew his mom, he’s super-athletic, he’s a nice mover, he’s built really well. It was just such a genetic masterpiece that he came out so amazing. People will spend their entire lives trying to make a horse like him.”

So, where do these horses come from?

Reed describes it as a genetic mutation that doesn’t seem to follow any breed’s specific lineage and thus can be found in all different kinds of horses. The traits also can manifest in different ways — extremely curly coats; curly eyelashes and tactile hair; slick, fine hair; smaller tails; and even bald spots.

Additionally, the horses’ summer coats tend to be very short and show less curl but get poodle-like in the winter (not to be confused with the longer coats developing from Equine Cushing’s disease).

In 1971, upon the formation of the American Baskhir Curly Horse Registry, Reed said only about 20 horses in the country were documented. Domestically, curlies tend to be found out west. Internationally, France and Canada are hot spots.

“It’s kind of a mystery where curly horses came from,” Reed said. “They just kind of seem to appear sometimes. The first ones that you really heard of in the United States were out in Nevada in a mustang herd. A rancher saw them out there and he caught a stallion and he bred that stallion to just everything.

“I wouldn’t really characterize them as a breed as far as lineage as much as a characteristic. Quarter horses are a lineage breed. They have a certain bloodline. With curlies, there has to be a bloodline somewhere that you follow that’s not really super-mapped out. You’ll see anything from big, big draft horses to little-bitty ponies that will have the curly horse traits.”

In Reed’s observation, many curly horses tend to be isolated and found in colder climate areas, and she speculates that the wavy coat — which also requires a different grooming plan — may have been an adaptation to withstand that kind of weather.

Of her six curly horses, Reed bought some through auctions and some through private sales. The purchases have paid off in a variety of ways, and the horses are a draw to people who visit the farm, even though they might not realize how rare the curlies are.

“People don’t realize what a rare opportunity to see one,” Reed said. “Most people figure there’s just a bunch of horses and that one has curly hair.”

But not only are curlies a draw to the untrained eye, but to someone like Reed who lives and breathes horses, as well. When she sees one for sale, she tends to buy it and sets out to find a job for it to do.

“If we see a curly horse, we do try to obtain them if at all possible,” Reed said. “We do some resale, so I have a curly horse right now that’s for sale. He’s actually crossed with a Friesian, which is a really expensive, fairly recently imported breed of horse from the Netherlands. So, he’s considered a Friesian sport horse and a curly sport horse. We’ve had him for about a year and put a lot of training into him. We’ve taken him to horse shows. He’s an extremely versatile horse. He’ll make somebody a really good horse.

“And that’s part of what we do. Whenever we buy horses, however we acquire them, we try to find their purpose in life. Sometimes, their purpose in life is to stay here, like Friday. He and I just bonded really well. I’ll always have him. I can’t imagine me ever selling him. And then Louie, I bought and he just turned out to be the coolest lesson horse ever. He’s just so ‘Steady Freddy’ and really teaches the kids.”

Pumpkin may be small in stature, but she makes up for it with her "crushed velvet" coat characteristic of some curly horses.

Louie's summer coat is fine and short, but his curly horse traits still show up in his mane.

Mimosa Hills Farm owner Crosby Reed talks about curly horses while holding the reins on Shadow (left) and Pumpkin, two of six such equines on the farm.