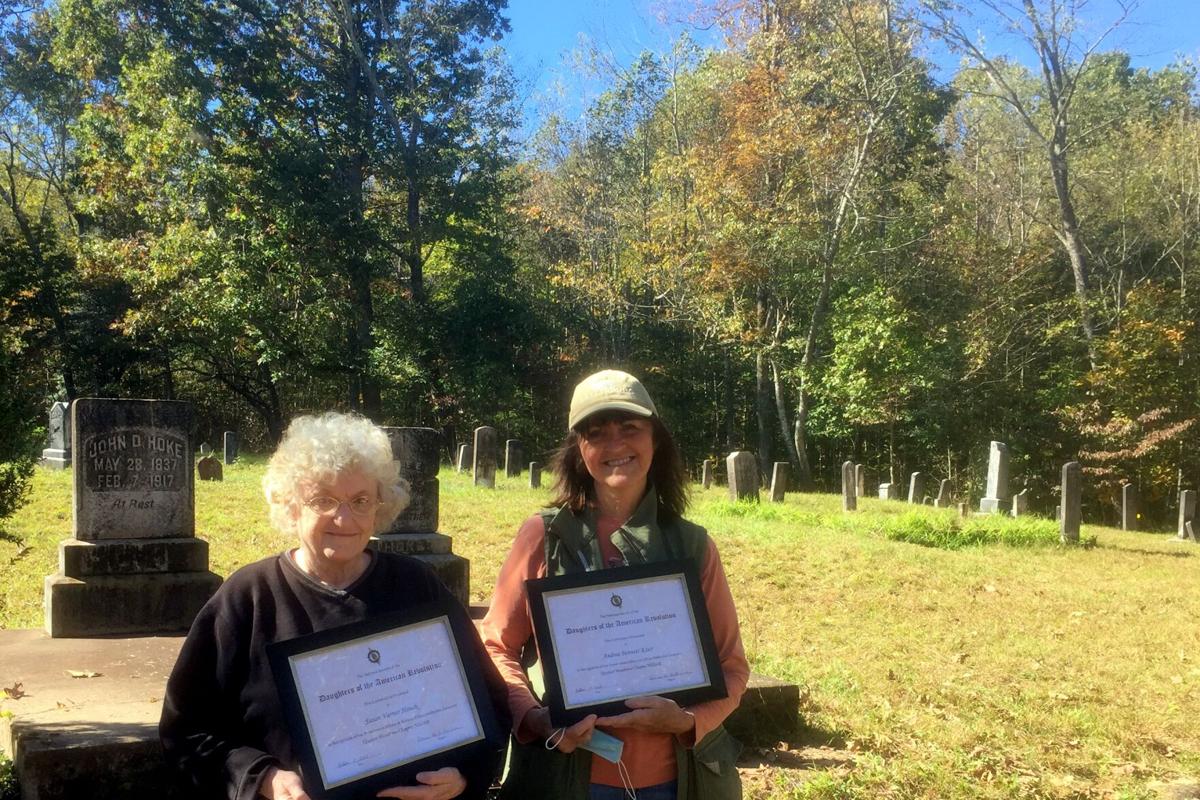 Susan Houck and Andrea Kiser are pictured at Gilboa cemetery with certificates from the Quaker Meadows Chapter of the Daughters of the American Revolution honoring the 73 hours and 134 hours of work, respectively, that they dedicated to restoring the cemetery. 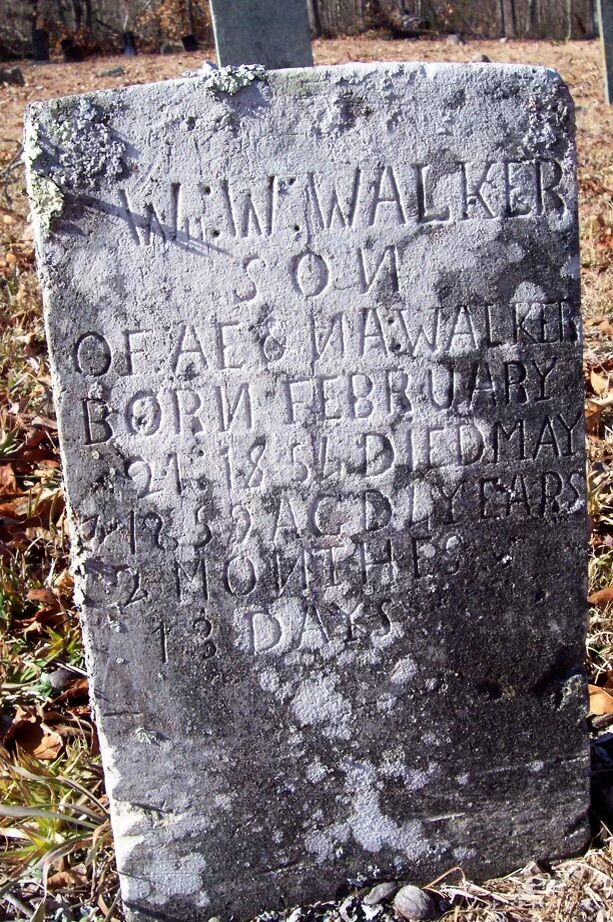 Pictured is a headstone at Gilboa cemetery belonging to Andrea Kiser's great-great uncle before it was cleaned. 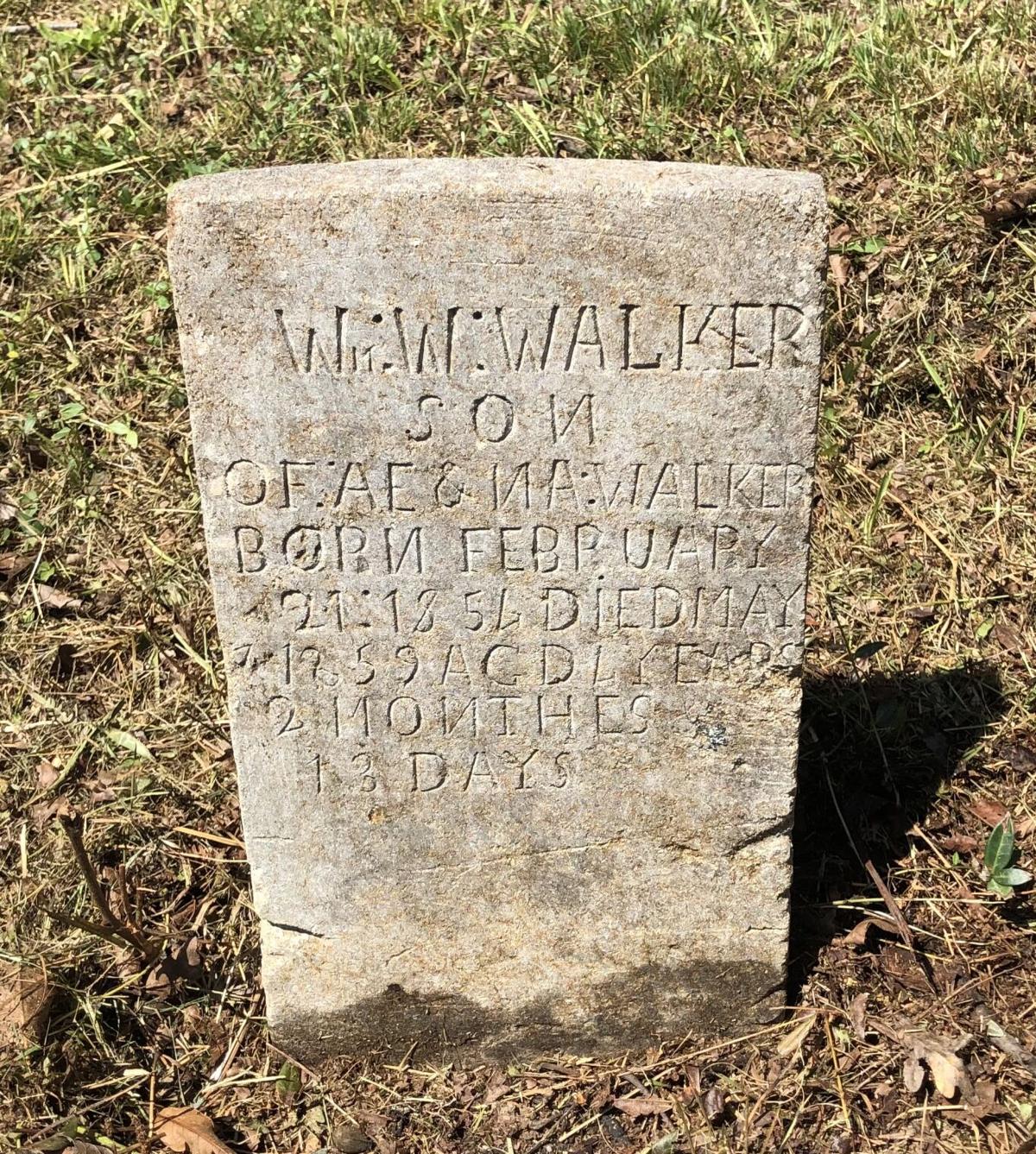 Pictured is the cleaned headstone of Andrea Kiser's great-great uncle. 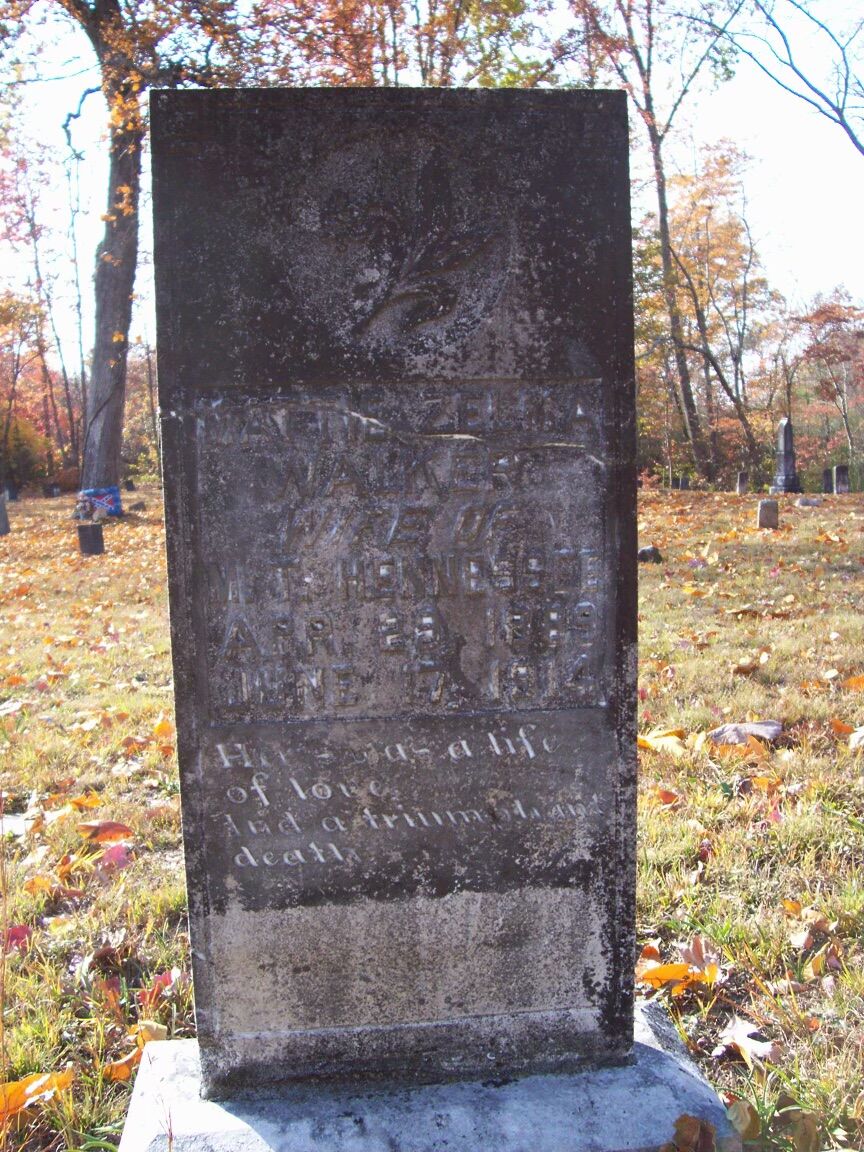 Pictured is the headstone of Zelma Walker Hennessee, Andrea Kiser's great aunt, before it was cleaned. 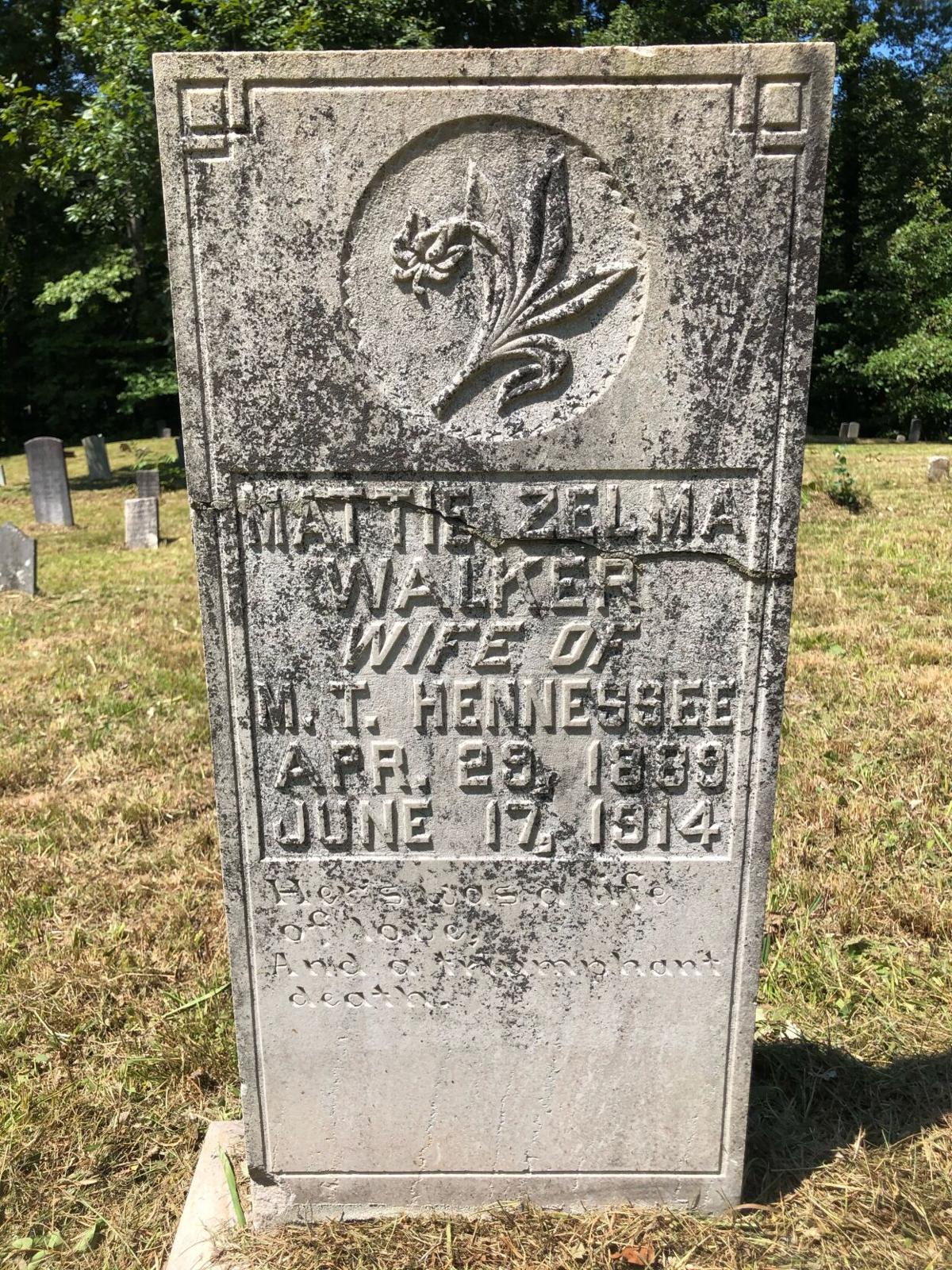 Pictured is the headstone of Zelma Walker Hennessee, Andrea Kiser's great aunt, after it was cleaned. 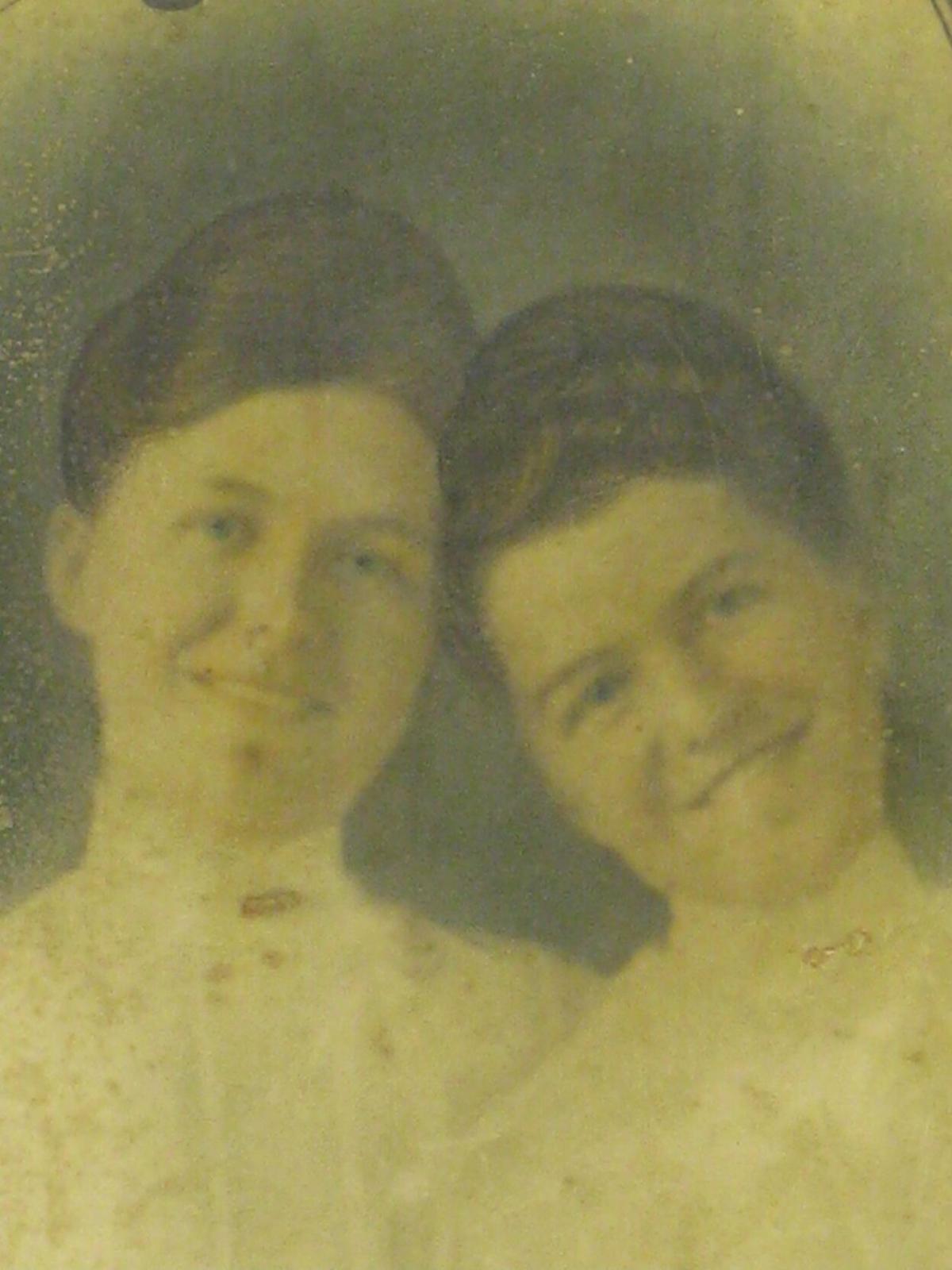 Pictured is Andrea Kiser's Grandmother Bennett with her twin sister, Zelda Walker Hennessee. Hennessee died in 1914 when she was 25.

When the COVID-19 pandemic struck and slowed everyone down, Andrea Kiser of Morganton decided to cross an item off her bucket list. Andrea, a Burke County native, said, “I have two sets of grandparents, both Walkers, buried at Gilboa cemetery. I wanted to get new headstones for some in my family because the old ones would become unreadable at some point.”

Listed on the National Register of Historic Places, Gilboa Methodist Church is the oldest framed church in Burke County. It sits off U.S. 64 in the Salem community. The congregation dates to 1793, and the church was built in 1879. The Western Conference of the United Methodist Church owns the property, unused since the 1940s except for special events.

The earliest identified grave in the church cemetery is that of Nancy Thornberry, who died in 1825.

In July, Andrea got through the locked gate and drove to the church along an overgrown 1/3-mile dirt road deeply eroded by water drainage. Once at the cemetery, she said, “I could have cried when I saw it. So many bushes and weeds grew there that you couldn’t even see the headstones. Pine trees were growing up as tall as my head.”

This energetic retired nurse realized a mountain of work was needed. She asked a friend, Dirk Sparks of Morganton, to help and met him at the cemetery one July morning at 6:30 a.m. They worked six hours in the mid-summer heat. Dirk ran his weed-eater around each stone. Andrea said, “I cut out bushes and yellow pines. It was so hot, but all that work had to be done before it could be mowed.”

Andrea connected with a cousin who sent money for mowing, and said, “If it hadn’t been for her, Joy English, I couldn’t have afforded it.”

Andrea started a Facebook page called, “Lest We Forget ... Gilboa Remembered,” which has 82 members now, several of whom have given donations for the road.

A few of those who’ve helped: Joy English, Brice McGlamery, Matthew Mace, and Ryan Kennedy and Boy Scout Troop 899 from Denton’s Chapel Methodist Church. First United Methodist Church set up a porta-potty for volunteers, which will remain until work is finished. The Quaker Meadows Chapter of the Daughters of the American Revolution cleaned inside the church building as well as helped in the cemetery. Andrea Kiser’s family provided major help: husband Wayne, son Pat, and his daughter, Gracie, along with her daughter, Donna Childress, and Donna’s children, Anna Rose, Sam, and McKenna.

Run-down gates and locks were replaced; the road was scraped; a front-loader dug out the roadside ditches so water could drain, and three 20-foot pipes were put in. Fallen headstones and a sunken grave were reset, and weeds were pulled to show original plantings.

Where the church drive turns off U.S. 64, asphalt was needed. “Eleven tons were ordered, and they made a mistake and sent 16 tons. That was not a mistake; it was the Lord’s work,” said Andrea, who is a member of First Baptist Church in Glen Alpine. They needed it all.

Andrea’s friend, Susan Houck, learned of her work and told her, “Don’t go out there by yourself. I’ll go with you.” Susan is a Burke County native and member of First United Methodist Church, which oversees the Gilboa property. She checked with the pastor, who gave his blessing to “whatever those ladies want to do.”

Houck said, “I have a passion for cemeteries.”

Susan’s interest is in the people buried there. “It’s the ordinary everyday history I enjoy ... not the famous generals. These generals have been written about to death.” She’s taken photos and researched and written thousands of memorials for the international “Find a Grave” website for 20 years to help people locate their ancestors.

In the Gilboa cemetery, nearly half of the markers are simple field stones with no engraving. Susan found the others were hard to read. She said, “Every stone was just about black, covered with thick, thick black mold. I’ve never seen it that bad.” Different kinds of lichen and algae attack the stones, but mold and mildew are the worst, said Susan, who’s taken several classes in cemetery conservation.

She purchased D/2 cleaner, a biological formula used at Arlington and Gettysburg, and carefully applied it to the headstones. She said, “Now, they’re gray, some of them white.”

Susan said she remembered the days when everyone said to clean the stones with Clorox. “It does clean, but it damages the stone microscopically. As it soaks in and dries, it will make cracks bigger and lichen and mold gets worse.” She added, “Sand-blasting or power washing hastens the break-down process.” She’s also seen stones damaged where someone rubbed chalk over them. “It permanently scratched the stone.”

Houck made a plea for not removing damaged headstones. “If you want to replace it, please set the new one in front. Even if the old one is a pile of crumbled rock, please don’t take it away. It’s history.”

She praised Andrea Kiser’s efforts saying, “Andrea has so much energy and enthusiasm. She’s amazing.”

Andrea said she was not seeking credit or praise for her work. “I want people to know about Gilboa so they’ll support it. I started it, but other than that, everybody else has taken part.”

Gwen Veazey is a member of the Morganton Writers' Group.

While Burke County Public Schools may be meeting remotely, the school system’s nurses are hard at work helping to administer vaccines to resid…

Movies in a Minute: "The Little Things"

Susan Houck and Andrea Kiser are pictured at Gilboa cemetery with certificates from the Quaker Meadows Chapter of the Daughters of the American Revolution honoring the 73 hours and 134 hours of work, respectively, that they dedicated to restoring the cemetery.

Pictured is a headstone at Gilboa cemetery belonging to Andrea Kiser's great-great uncle before it was cleaned.

Pictured is the cleaned headstone of Andrea Kiser's great-great uncle.

Pictured is the headstone of Zelma Walker Hennessee, Andrea Kiser's great aunt, before it was cleaned.

Pictured is the headstone of Zelma Walker Hennessee, Andrea Kiser's great aunt, after it was cleaned.

Pictured is Andrea Kiser's Grandmother Bennett with her twin sister, Zelda Walker Hennessee. Hennessee died in 1914 when she was 25.