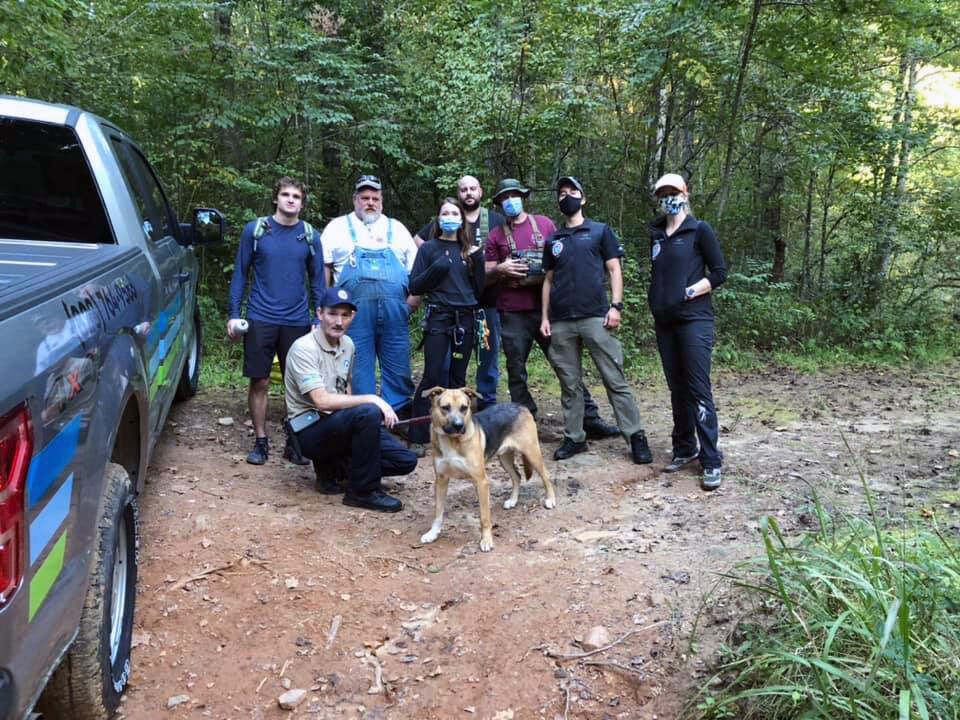 Burke County Animal Control Supervisor Pete Aldridge (kneeling) was one of the people who helped rescue Sinker, a dog who was rescued recently from a sinkhole in the Pisgah National Forest. 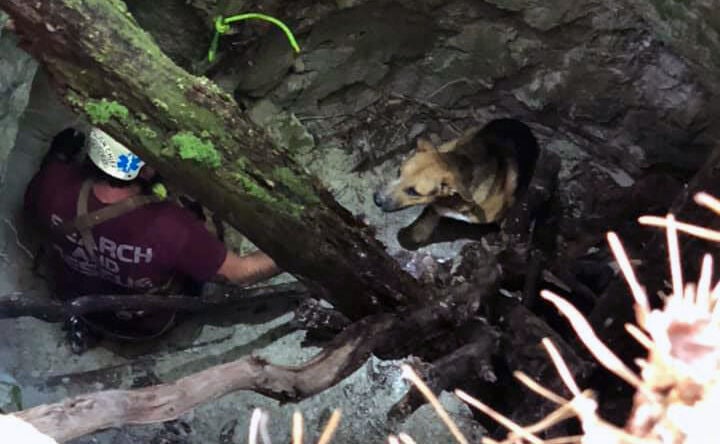 A rescuer works with Sinker at the bottom of the sinkhole to coax him into a rope and harness to pull him out. 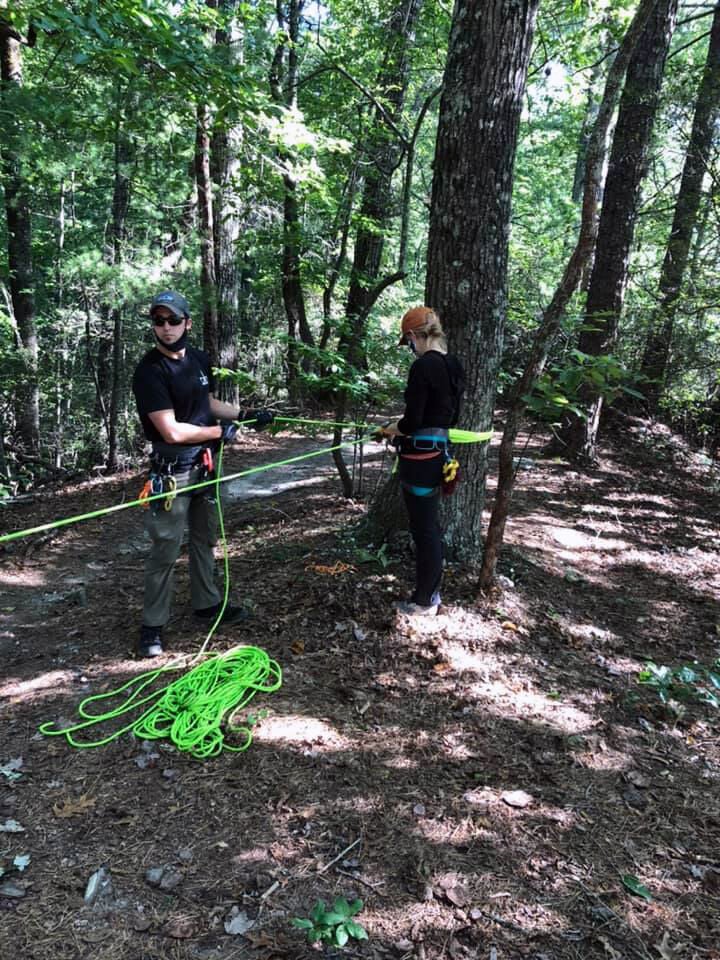 Rescuers used a rope system to pull Sinker out of the sinkhole. 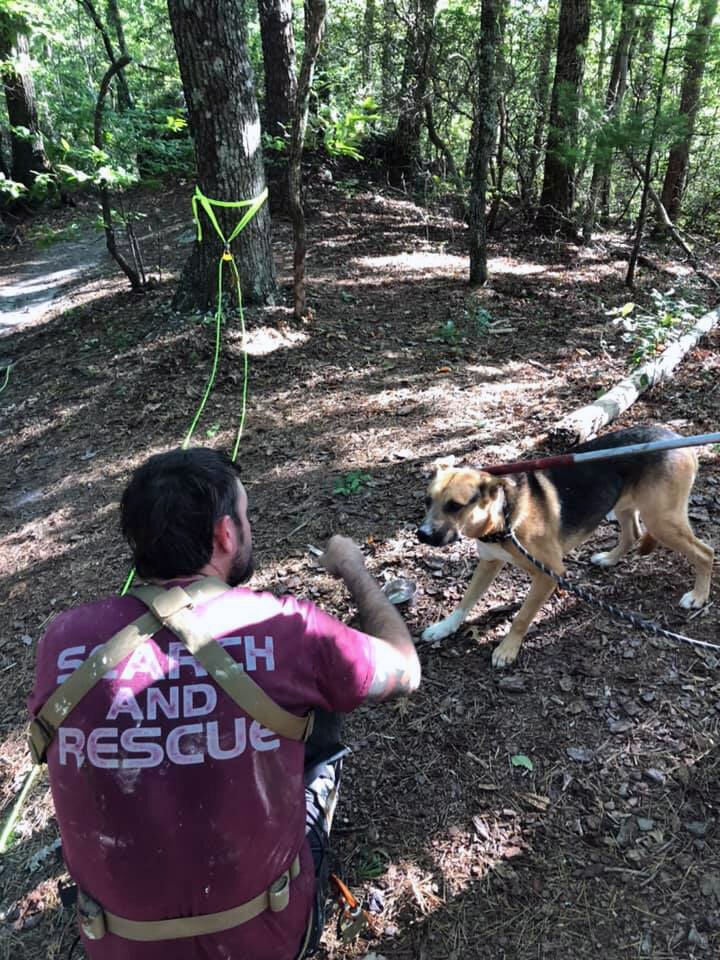 Wes Taylor offers Sinker a snack after the rescue.

A dog might have dug into his visit to a national forest a little too deep last weekend after he had to be pulled out of a sinkhole Sunday.

Wes Taylor, battalion chief with the Burke County Rescue Squad, said his organization received the call to help, along with the Carolina Wilderness externs and Burke County Animal Enforcement, after some mountain bikers found a dog stuck in a sinkhole.

“There was a group of guys that were out mountain biking on a trail in the Pisgah National Forest,” Taylor said. “They stopped for a break. One of the names for the trail is the Sinkhole Trail, and they stopped at the sinkhole and just happened to look in and saw a dog about 30 feet down at the bottom.”

The group had to ride out of the trail to find enough cellphone signal to call 911. They were able to get in contact with McDowell County 911, which contacted Burke County to get the rescue squad and animal enforcement officers dispatched to the area.

Rescuers hiked about 1¼ to 1½ miles up the mountain to the sinkhole.

“(We) set up a rope system and had one rescuer rappel down and try to make friends with the dog,” Taylor said. “He wasn’t too happy to see us. He was a little protective, and he’d probably been there for a few days at least.”

Some beef jerky and snacks went a long way to win over some of his trust.

“He was a little shy and a little protective, so we kind of gave him some beef jerky and some snacks and eventually he would let us pet him,” Taylor said. “We were able to get a rope around him and get him in a harness and raise him up to the top where we gave him water and a little bit more food and hiked out with him.”

It’s not uncommon for rescuers to get calls for animal rescues like what happened with Sinker, the name given to the dog after his experience with the sinkhole.

“We get several a year,” Taylor said. “We get usually one or two high-angle, where the dog is in a sinkhole or a cliff or an old well, or we get a few for, we had one several years ago, for a 120-pound dog that just kind of gave up on the trail on Pinch In, so we took in the basket and carried him out just like we would a person. He laid there and was a great patient. … They typically make the best patients.”

Pet owner responsibility is crucial for anyone taking their dog with them on a hike.

“There are leash laws in place in all the national forests,” Taylor said. “They require your pets to be on a leash. … Have your pet microchipped so that if something like this does happen we’re able to get to you quicker.”

Things are on the up-and-up for Sinker now that he’s on level ground.

“(He) is warming up to staff quickly despite his scary ordeal (Sunday),” Stump said in an email to The News Herald.

Sadly, Sinker was not wearing a collar and is not microchipped. If he isn’t claimed by his owners by Thursday, he will be off stray hold and available for adoption. Burke County Animal Services can be reached at 828-764-9588.

Burke County Animal Control Supervisor Pete Aldridge (kneeling) was one of the people who helped rescue Sinker, a dog who was rescued recently from a sinkhole in the Pisgah National Forest.

A rescuer works with Sinker at the bottom of the sinkhole to coax him into a rope and harness to pull him out.

Rescuers used a rope system to pull Sinker out of the sinkhole.

Wes Taylor offers Sinker a snack after the rescue.