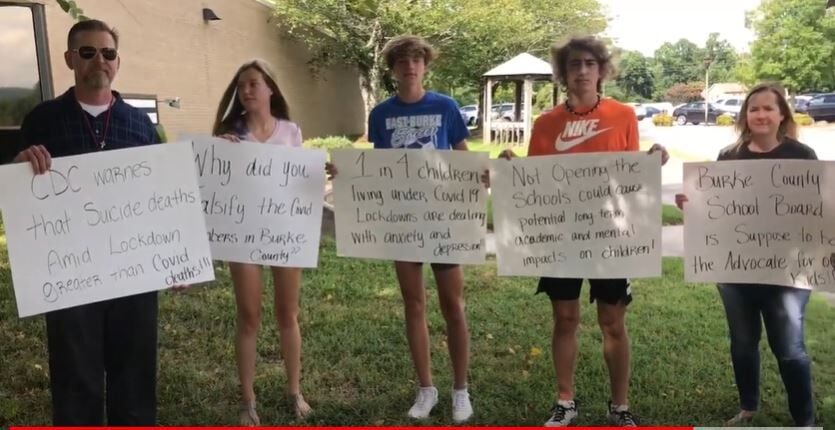 And several showed up last week to the school system's central office in Morganton hoping to make their feelings known.

The small protest at the central office was in response to the school board's reversal of its earlier decision to start school with a hybrid plan in which two groups of students would be in school for two days per week and the rest of the week would be spent learning online.

Then on July 27, the school board decided to go with an all-remote learning plan through at least Sept. 14.

That reversal didn't sit well with Ashley Penland, who organized the protest at the central office. Penland's son, Logan, is a rising junior at East Burke High School.

“Our kids need to be (receiving) one-on-one instruction at least a couple days a week,” Penland said. “I’m not really just here for my son. I’m here for all the people in Burke County that need structure in their lives — for the single mom, for the kids that don’t have a voice, for the kids that don’t have the same opportunity for education. I’m here for those that don’t have someone who will be at home helping to home school them, and for parents that aren’t going to be able to quit their jobs and home school their children.”

Penland posted a Facebook video July 29 in which she planned the protest for Friday. When she found out the central office is closed Fridays during the summer, she moved the protest to Thursday.

Penland said that after her post, other parents reached out to her, including single mothers who are struggling with making decisions to balance their work schedules with child care and assisting their children with schoolwork.

“There’s no normalcy in what’s going on right now,” Coffey said. “We need to restore faith that our kids, indeed, have a future, instead of them being at home and worrying about their parents and whether they have a job or not.”

Penland felt like she needed to be at the central office Thursday, she said.

“We don’t have another open meeting where we can make public comments until Aug. 17, which is the date (the schools) are supposed to start back,” she said. “I’d like to be at that meeting and talk to the school board members to see if they’d maybe do an open meeting. I just want (the board members) to know there are parents and grandparents in this community that want their kids to be able to go back to school, even if it’s a couple days a week.”

Penland, who is a nurse at Caldwell Memorial Hospital, said she will have to cut back her days at work to assist her son with his studies. She also said she is worried that her son and other students will miss out on social activities and could potentially struggle with increased anxiety and depression as a result of the remote start.

Angie Crump’s son is a rising junior in Burke County Public Schools. She said her biggest concern with the remote start is that her son, as a junior, is in his most critical academic year.

“He has off-campus classes that he was going to take for his degree he wanted to have in college,” Crump said. “Now, I don’t know if he’s going to be able to do that. So, I’m here to support him.”

The Burke County Board of Education will hold a work session meeting on Monday. Its next regular meeting is scheduled for Aug. 17.

Craven reflects on first year as board member

Though it may seem like significantly longer, nearly one year has passed since Wendi Craven became a member of the Burke County Board of Education.

Local teacher calls it quits after 30-plus years

Band director Carla Draughn has been a fixture in Burke County Public Schools for more than 30 years.

Burke County United Way, with the help of community donors and sponsorships, quickly raised funds for internet hot spots during July, August a…

A Burke County Public Schools teacher died unexpectedly in her classroom on Wednesday.

Community College and Technical Institute, which has campuses in Hudson and Boone, has released its dean’s and honors lists for the summer 202…