Two long-time teachers retire from N.C. School for the Deaf
0 comments
Share this
{{featured_button_text}}
1 of 6 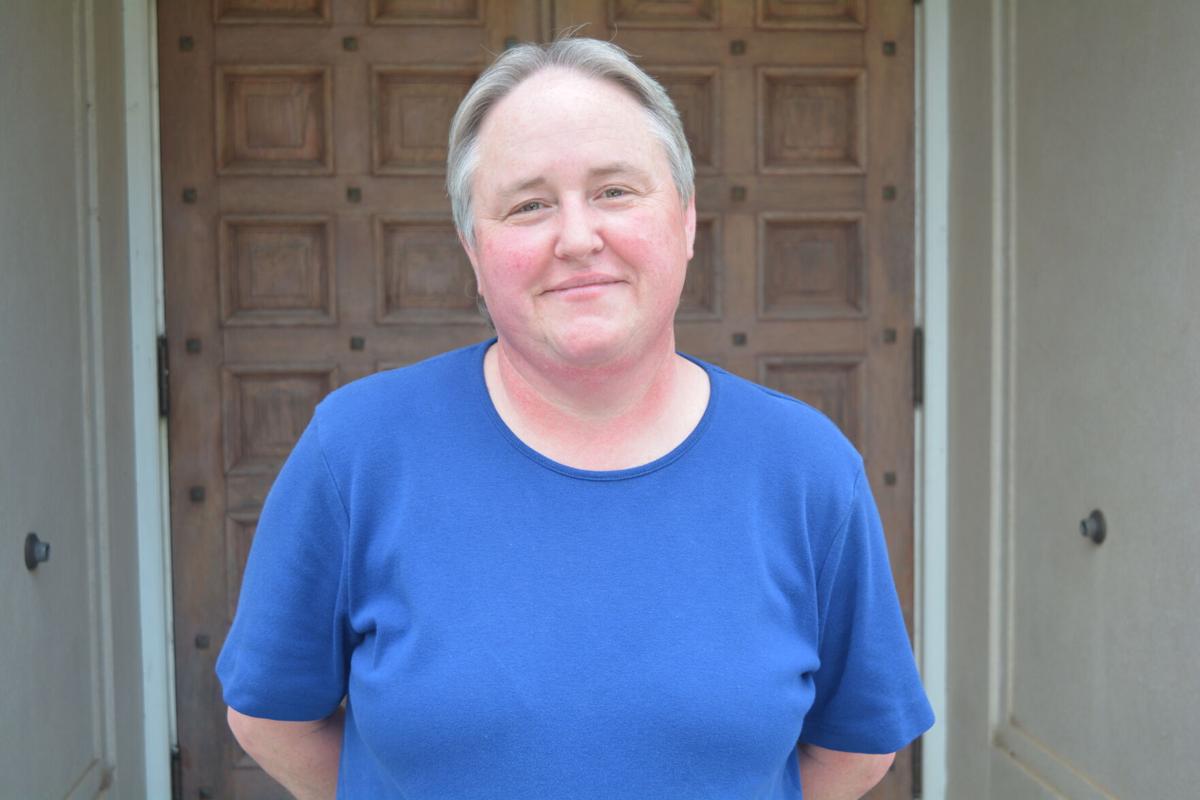 Millie King is a retiring math teacher from the N.C. School for the Deaf in Morganton. 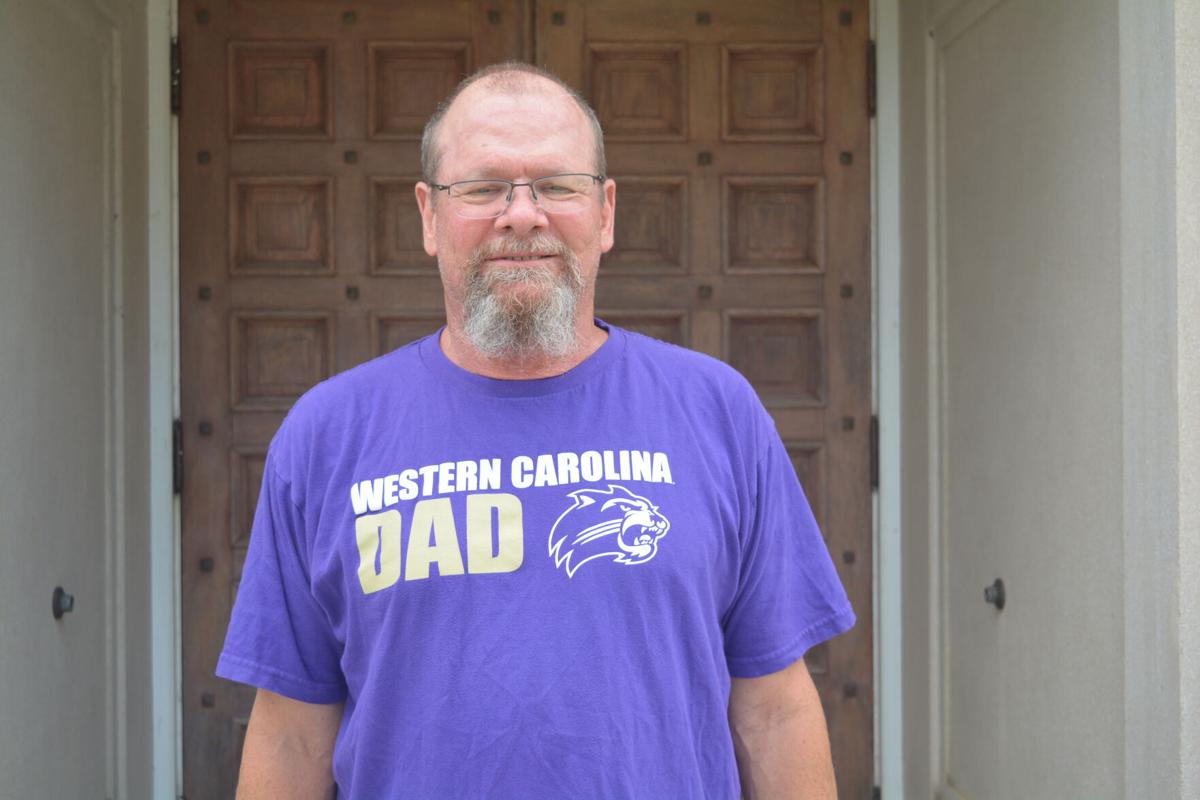 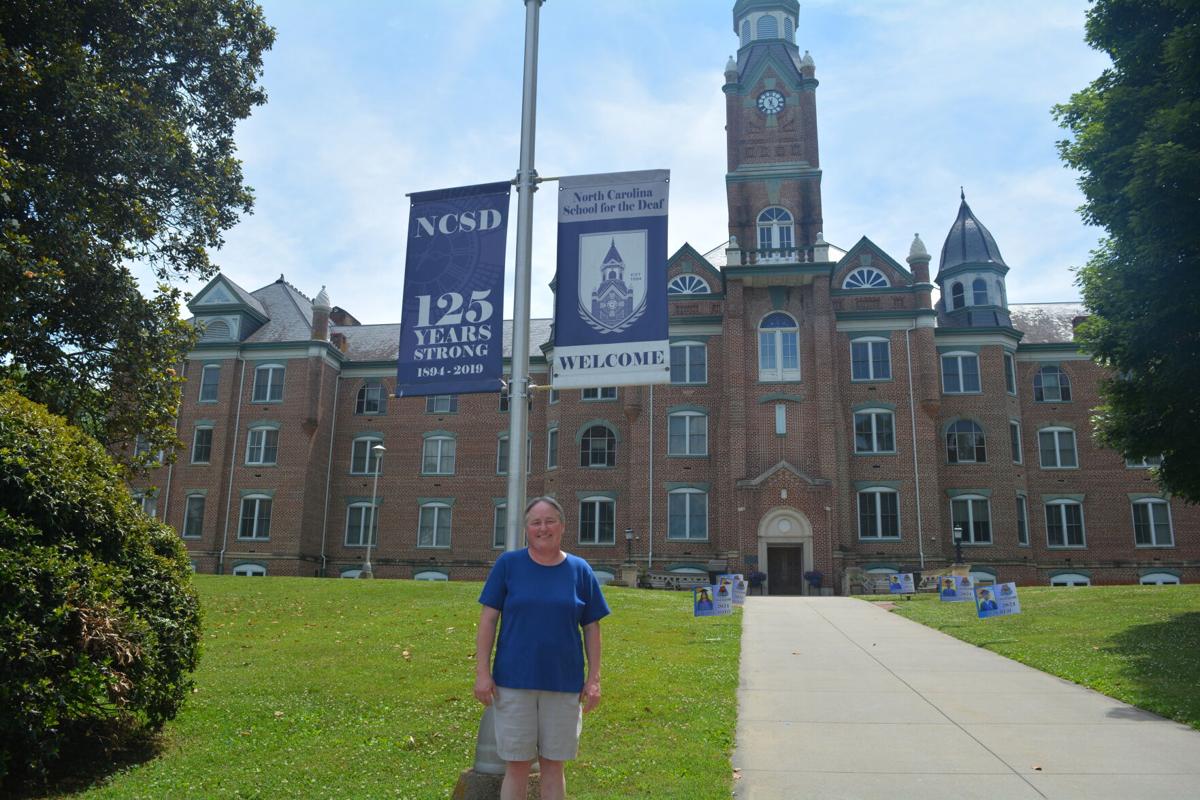 Millie King reminisces on her years of teaching in front of the main building at the N.C. School for the Deaf. 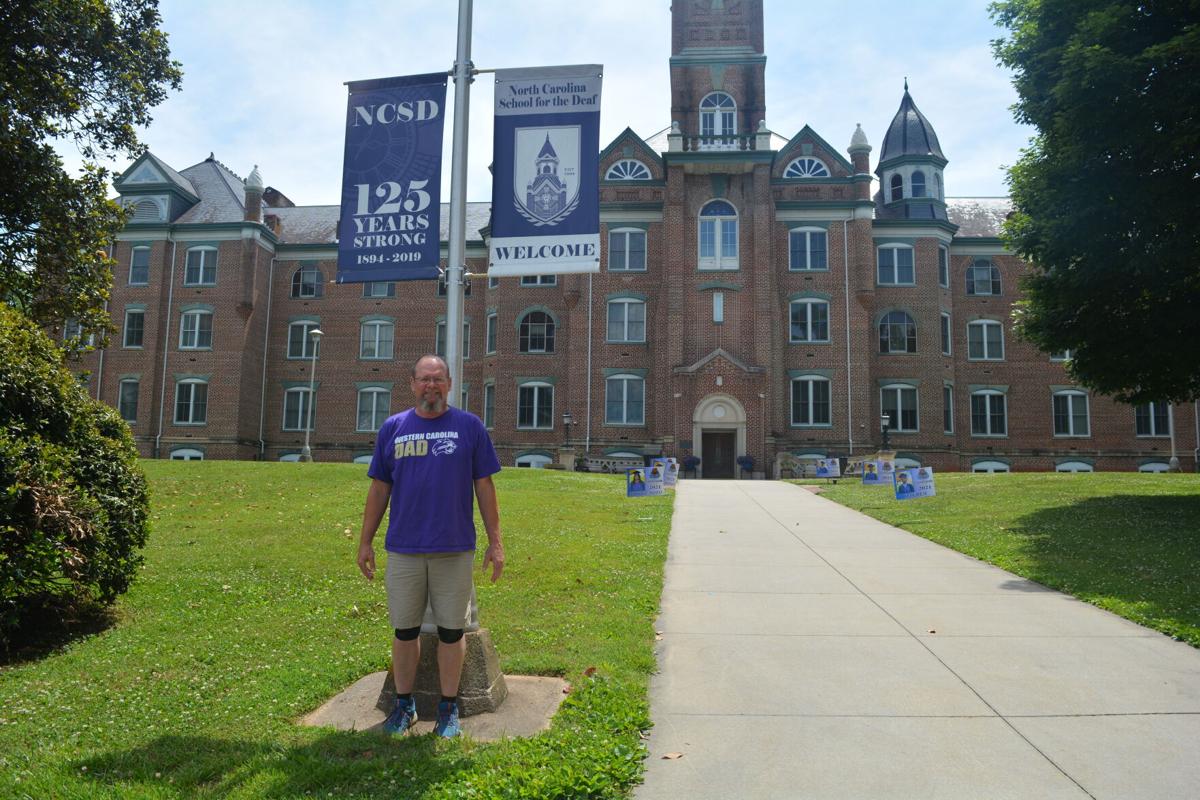 Thomas Krohn will be retiring from the N.C. School of the Deaf this year. 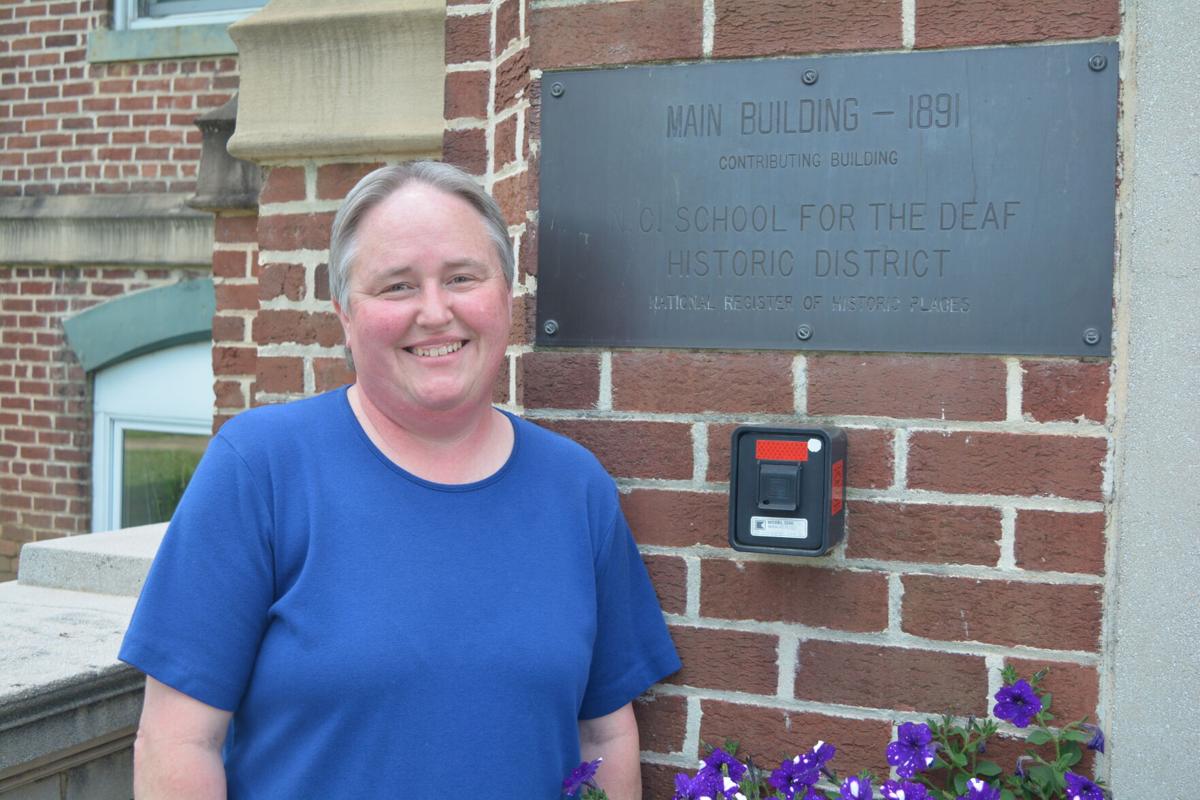 King in front of the Main Building at the N.C. School for the Deaf. 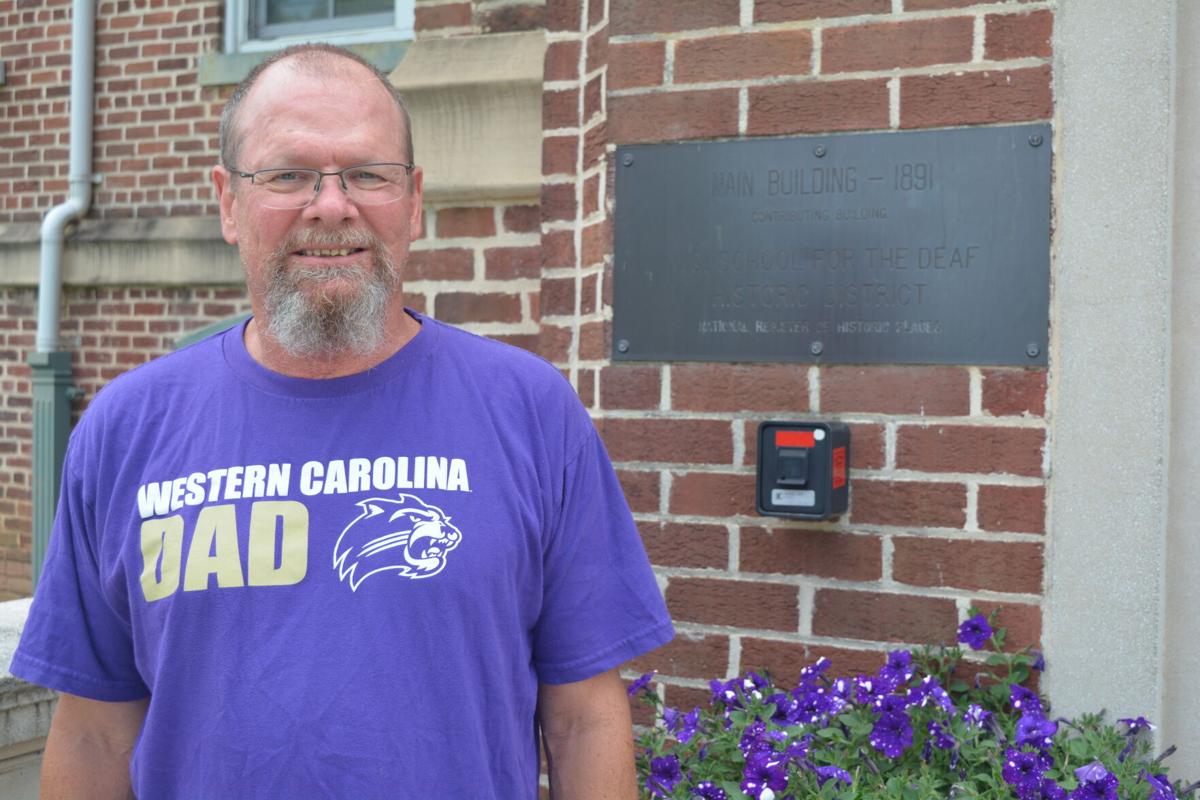 Krohn in front of the main building at N.C. School for the Deaf.

The N.C. School for the Deaf will say farewell to two of its retiring teachers at the end of the school year.

Millie King, a middle school math teacher at NCSD, is one of the teachers retiring.

“I grew up here in Burke County in the eastern part near Hildebran and I graduated from East Burke,” King said. “I had a deaf cousin who was five years older than me, so that’s how I got interested in sign language. Not necessarily teaching, but then when it came time for me to figure out what I was going to do for college, I didn’t really want to leave home, so I went to Lenoir-Rhyne (University).

“When I got to LR, the only interest that I had was sign language. They had a deaf education major there that I could choose and I got my bachelor’s degree from there in deaf education as well as elementary education, so I had the two degrees in both.”

King did not start her teaching journey in Burke County. The search for a job after graduation led her to explore other parts of the state.

“When it came time to seek a job after college was over, I decided to go to the Outer Banks of North Carolina to a small island called Ocracoke,” King said. “There was one deaf student, he was the only deaf person on the island … I was there when — Jeffrey was his name — he was in fifth and sixth grade … I took Jeffrey to the Eastern N.C. School for the Deaf for a six-week trial period … when that time was up, he made the decision not to transfer to ENCSD, but I made the decision to transfer there.

“I wanted the deaf school experience, to be around other teachers who knew about deafness and just to have more than one student who was deaf …I was there for eight years … My parents were getting older and they still lived here in the area, so I wanted to try to come back here and teach here. That opportunity opened up and I took it, so I’ve been here since, for 20 years.”

King has taught math throughout her time at NCSD, teaching children as young as second grade. She was a National Board Certified teacher and was chosen as teacher of the year during her time at NCSD. She also coached volleyball and basketball during her career.

“Coaching was quite a memorable experience. There was one group of students, it was middle school girls basketball and they were struggling to do well against other public schools. They would often not even score seven or eight points a game. That year I decided to challenge them … if they were able to score in the double digits, I would let them shoot me with Silly String.

“Sure enough, that did happen and I stood there in mid-court. I had a rain jacket and some goggles on, I had as much protection as I could and they got to stand there and shoot me with Silly String. That was definitely one of the coaching highlights.”

King had many memories and experiences to remember as she reflected on her time teaching at NCSD. Experiences involving her former home were some of the most memorable times she had with her NCSD students.

“As far as favorite moments while I was teaching, it kind of ties back to the Outer Banks,” said King. “I was able to plan four-day trips to the Outer Banks for our middle schoolers. We raised money, mainly by selling Little Caesars pizza kits. I did that for many years. I was proud of the fact that our kids could earn the money themselves and not have to ask the school for any money. We were able to charter a bus and we raised about $10,000 every time we went.

“Being able to take those students, I mean some of them had never seen the ocean before, that was fun. The time spent with them, showing them social studies and science hands-on, you know we could talk about the Wright brothers all day long, but if you go there and you see where that happened, that made the experience real for them.”

King will always treasure her time at NCSD. After 20 years and teaching for 30 years total, she looks forward to what the future holds.

“I’ve got a long history and memories here at the N.C. School for the Deaf … I just feel like it’s my time to do something different since I’m still young. I have some other interests that I’m thinking about pursuing after retirement. I’m just looking forward to the future and what it holds. I will definitely miss the people here, the staff and the kids, but I just want to be able to take the time to do some things that I want to do outside of the school setting.”

Tom Krohn, a high school math teacher at NCSD, also will be retiring at the end of the school year.

“I got a bachelor’s in math from Gallaudet University. I worked at the Marie Phillips School for the Deaf,” Krohn said. “I worked there as a teacher’s assistant for emotional and social needs students. And I found that I wasn’t made to teach those kids, so I ended up leaving and eventually worked at Kentucky School for the Deaf as a dorm supervisor.

“I was there for a year and then I moved to Florida School for the Deaf and I was there for two years … So then I went to grad school. I wanted to teach, but there weren’t many math teaching opportunities. So, I was without a job for a year, so Eastern NCSD called me and was like, ‘We need a math teacher’ and right away they made me a math teacher.”

Krohn had family in the Burke County area and eventually realized he wanted to move back.

“So I really enjoyed the Outer Banks of North Carolina, and I met my wife at a church conference,” Krohn said. “I told my wife I think we need to move to Burke County. My wife’s parents lived here in Burke County and my wife didn’t want to put the kids in daycare, you know, in the eastern part of the state so I agreed and we moved here. Things progressed here and I got a job here at NCSD as a math teacher … I was scared to move here at first … the opportunities for the deaf were very limited, but then I grabbed it and I ended up here and now it’s my home.”

Krohn had many special memories to reflect on his many years teaching at NCSD.

“My first year I taught I had a full classroom,” Krohn said. “We had EOC’s and all of my students passed theirs, all of them, 100% passed their EOC’s my first year. That’s one of my good memories that I have and, you know, being a class sponsor as well. The freshmen, I was with them for four years and was their sponsor — it’s a really good group.

“You know we did fundraisers and then when they became seniors, we got to do the senior trip. We went to Gallaudet University and then we went to Williamsburg, Virginia, and Virginia Beach. So we really enjoyed that senior group. So those are some really good memories I have, absolutely. I was also nominated for the Who’s Who teacher in the U.S. That was in 2002-2003.”

While teaching at NCSD, Krohn was also the athletic director at NCSD and coached multiple sports teams.

“Sports, I’m involved in sports,” Krohn said. “Here, I did football, basketball, track, soccer, weightlifting, volleyball. I’ve done it all here, until this year. This is the first year, I didn’t coach any sports, whatsoever. I guess I felt that disconnect this year. I’m 60 years old. I thought, ‘do I really want to coach with that disconnect,’ because it’s hard to get back into the groove once you’ve had a year off because of COVID.”

Like many teachers, the challenges of COVID were a lot to manage. Those challenges played a role in Krohn’s decision to retire.

“I would say back in March, it got really scary. You know COVID … I’m gonna be 60 And I just got really scared. Anxiety set in on me. The election also impacted me as well with anxiety. So, this year I’ve been sicker this year than ever and it’s all because of the anxiety. I’m very sensitive, not like it was in the past, like I used to not ever get sick. So, honestly, because of my health has impacted my decision to retire, and my passion, this year, it left me. And I felt like it’s not fair. I’m not being fair to the students.”

Krohn and King will miss their time at NCSD and are excited to explore the opportunities retirement has to offer.

Local backpack giveaway program has arrived for the 2021-22 school year.

Who is ready for blast off at Rocket Camp?

A local student has been chosen to participate in a national science, technology, engineering and math leadership program this summer.

North Carolina School of Science and Mathematics recently welcomed two new employees to its staff at the Morganton location.

School alumna reminisces on her time as a student

Who is excited to apply to the new NCSSM-Morganton campus?

Who is excited to participate in the Morganton arts design and engineering (MADE) competition this fall?

Whisnant awarded Alumnus of the Year

Western Piedmont Community College recently awarded its 2020 Alumnus of the Year award to Capt. Jason R. Whisnant who is employed with the Mor…

Millie King is a retiring math teacher from the N.C. School for the Deaf in Morganton.

Millie King reminisces on her years of teaching in front of the main building at the N.C. School for the Deaf.

Thomas Krohn will be retiring from the N.C. School of the Deaf this year.

King in front of the Main Building at the N.C. School for the Deaf.

Krohn in front of the main building at N.C. School for the Deaf.