WATCH NOW: Fonseca, Austin recognized during board meeting
0 comments
Share this
{{featured_button_text}}
1 of 2 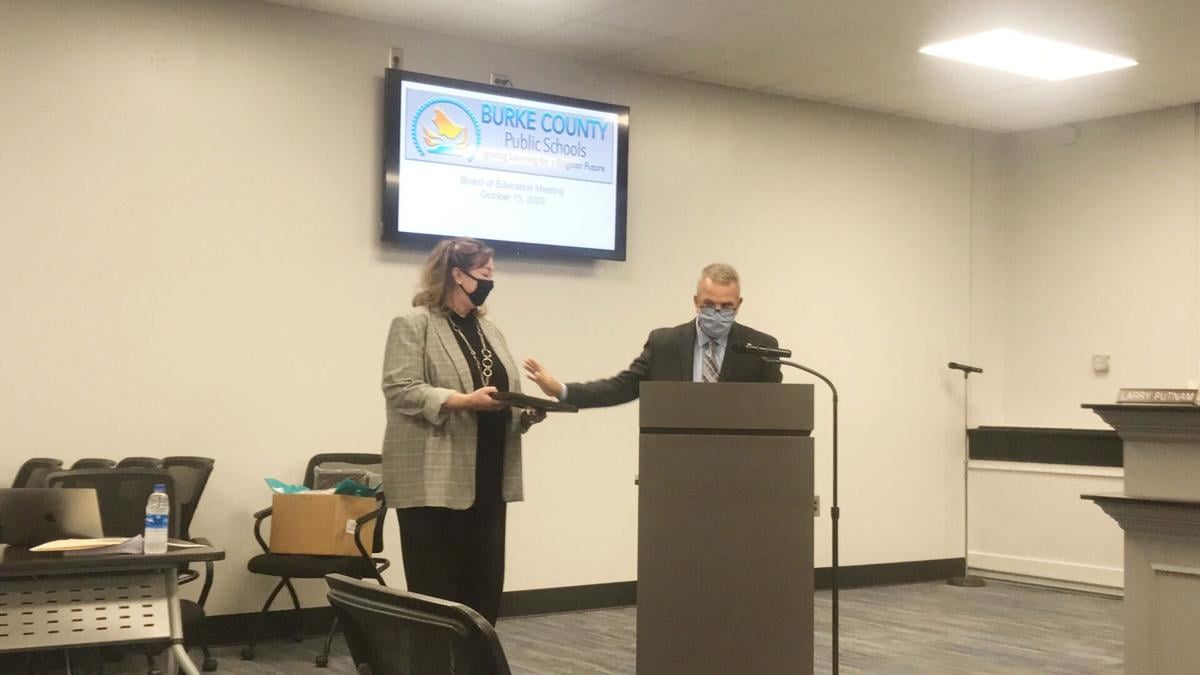 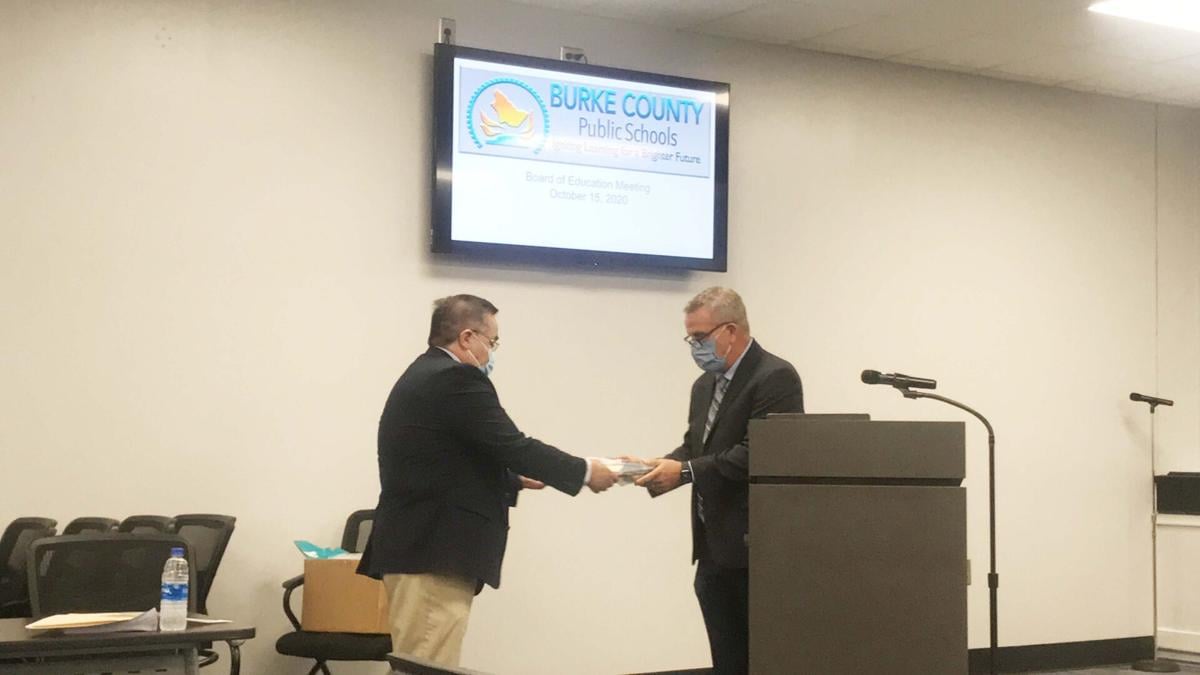 While the Burke County Board of Education voted last week to remain in Plan B due to the rising numbers of COVID-19 cases and quarantined or isolated students and staffers, there was some uplifting content during the meeting, too.

The administration presented Fonseca with a plaque, as he has accepted a position as superintendent in Martin County.

“This is a plaque in recognition of Dr. David Fonseca for his tireless efforts and work in Burke County Public Schools, from 2015 to 2020,” the plaque reads. “The work done here will impact the district for generations to come."

Fonseca thanked Putnam and the board and said he appreciated the recognition.

“This is on behalf of a great team that I had the opportunity to serve,” Fonseca said.

He then asked members of the system's leadership team and its principals in attendance to stand up to be recognized.

“It is them that the work is led by,” Fonseca said. “I’m not telling the board anything that you don’t know, so for the hundreds of teachers watching at home, thank you, because it is because of you that this and what we have accomplished is possible.

“To the thousands of parents that we have the opportunity to serve, thank you, and continue to believe that Burke County Public Schools is a great place to be.”

Fonseca came to Burke County Public Schools in 2015. According to Putnam, when Fonseca arrived, the system was ranked around 58th out of the 115 systems in the state. By leading a number of initiatives, including developing the Burke County Public Schools District Strategic Plan 2022 – A Roadmap for Our Schools and Community, Fonseca helped the system climb to No. 20 in the latest Niche rankings, Putnam said.

“I’m extremely happy for Dr. Fonseca and his new opportunity,” Putnam said. “I hate to see him go, but I’m also grateful for his hard work, dedication and leadership over the past five years. There’s no doubt that Martin County has gained an outstanding educator, hard worker and, most of all, a great person in Dr. Fonseca.

“The selfish part of me doesn’t want to see him leave — he certainly adds value to the Burke County Public Schools organization. But it makes me happy to know that Dr. Fonseca and Burke County Public Schools’ accomplishments are well known across the state. I’m sure we will continue to collaborate, just as we do with multiple districts across the state. Learning from each other is the only way that we can make our systems better.”

“One of the things I’ve learned from you is that you don’t do anything that’s not well thought out,” Armour said. “You introduced a plan book to the school system, which brought a lot of angst to a lot of teachers and a lot of calls to my house. But they actually learned how to do it, and they saw the advantages in it. Plan book, which means this is how you’re going to work with your children for the rest of the week, or however. Yet, planning is not a bad thing — trying to live tomorrow today is tough. And you taught me that we can’t live tomorrow today, and we have to take each day and make the most of it, and make the best of it. That’s one of the big things you’re going to be leaving Burke County Public Schools, is that you can plan all day long, but you’ve got to live today for today.

Fonseca’s last day in the school system will be Oct. 30. He will start in Martin County around Nov. 1, said Cheryl Shuffler, the Burke County system's public relations officer.

Also during the meeting, Austin was recognized as principal of the year.

Putnam said the recognition was determined by a vote of principals throughout the system. She will now go on to regional, and potentially state, competitions later.

Austin has been in education for nearly 25 years, Putnam said.

“(Austin) said being principal of the year makes her think of her favorite quote from Einstein, which is on her office wall: ‘You’ll never fail until you stop trying,’” Putnam said. “(Austin said,) 'While I often fail, I look forward to my next learning opportunity, and I want to share the same FAIL – First Attempt in Learning – with the students and staff I’m so blessed to have at Walter Johnson Middle School.'”

Austin began teaching in Caldwell County before moving to Walter Johnson Middle in its second year. Previously, she has taught high school English and a range of subjects in middle school and served as an instructional facilitator and assistant principal in Caldwell County Schools.

Austin returned to Burke County Public Schools in 2013, and has served as principal at Mountain Crest, Hillcrest Elementary and East Burke Middle before heading to Walter Johnson.

“While a person who loves a change and challenges, Ms. Austin finds that this year has been a trying times for everyone,” Putnam said. “She said the families at Walter Johnson have been so understanding and supportive of our teachers, the students have been wonderful, and we haven’t had any issues with the different way that school looks for our students.

“She sees several positives coming out of the different school in 2020,” Putnam said. “Students will be pros at adapting to online learning platforms, and students will learn valuable problem-solving skills — if something is not working with their assignment, they have learned ways to persist and how to fix that problem. Students are seeing different ways to inquire and ask teachers questions, as clearer ways to communicate are learned each day.”

The board’s next regular meeting is at 6 p.m. Nov. 9 at the Olive Hill Resource Center.

HILDEBRAN — One local school is helping to wipe out a need in the community while raising money to fund programs.

With COVID-19 cases throughout the county, state and nation surging, the school system could not avoid an uptick in cases last week.

Facing so many uncertainties at the beginning of the school year, many parents opted against having their child begin kindergarten, choosing i…

DREXEL — On Tuesday, a local school moved to remote learning after one-third of its staff members were forced to quarantine as a result of com…

CULLOWHEE — Western Carolina University has received a $583,074 grant from the U.S. Department of Education for an after-school program to hel…