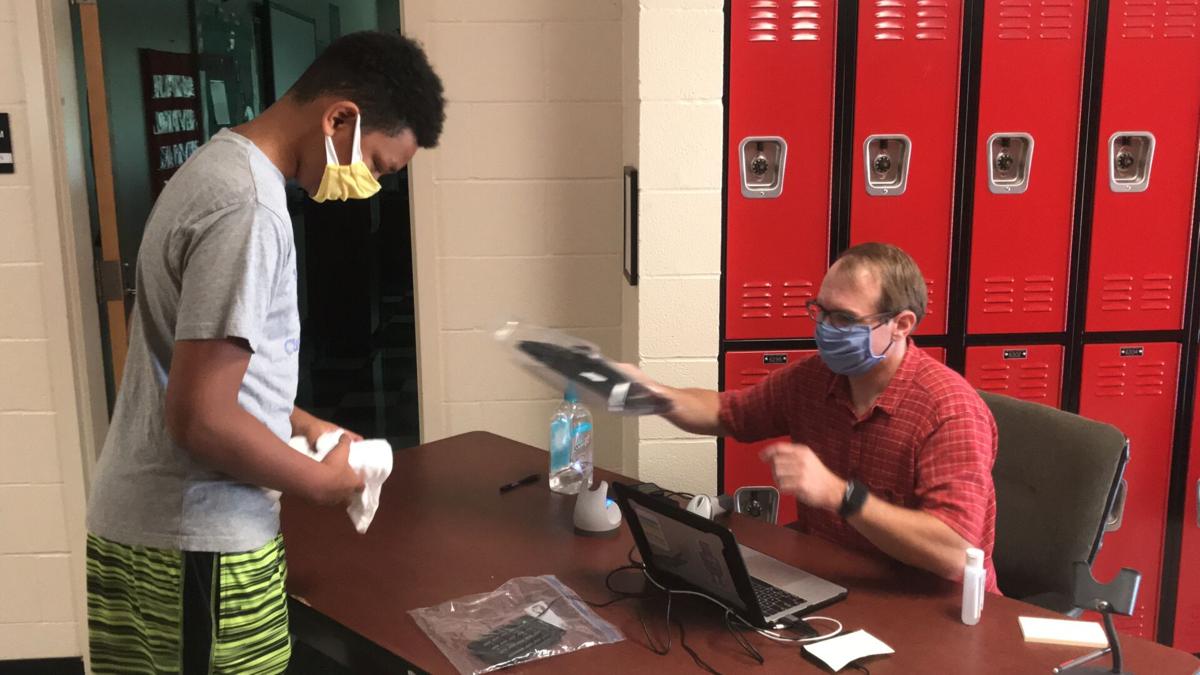 A student at Patton High School picks up his virtual learning device this week. 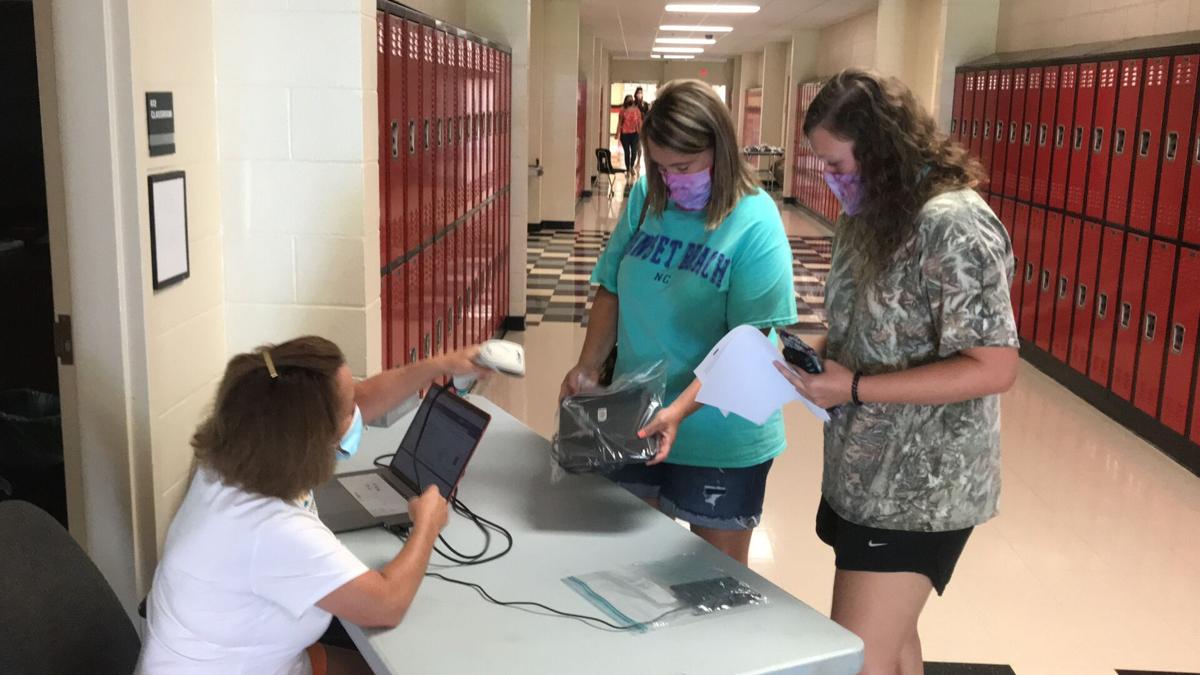 Students at Patton High School picked up their virtual learning device this week. 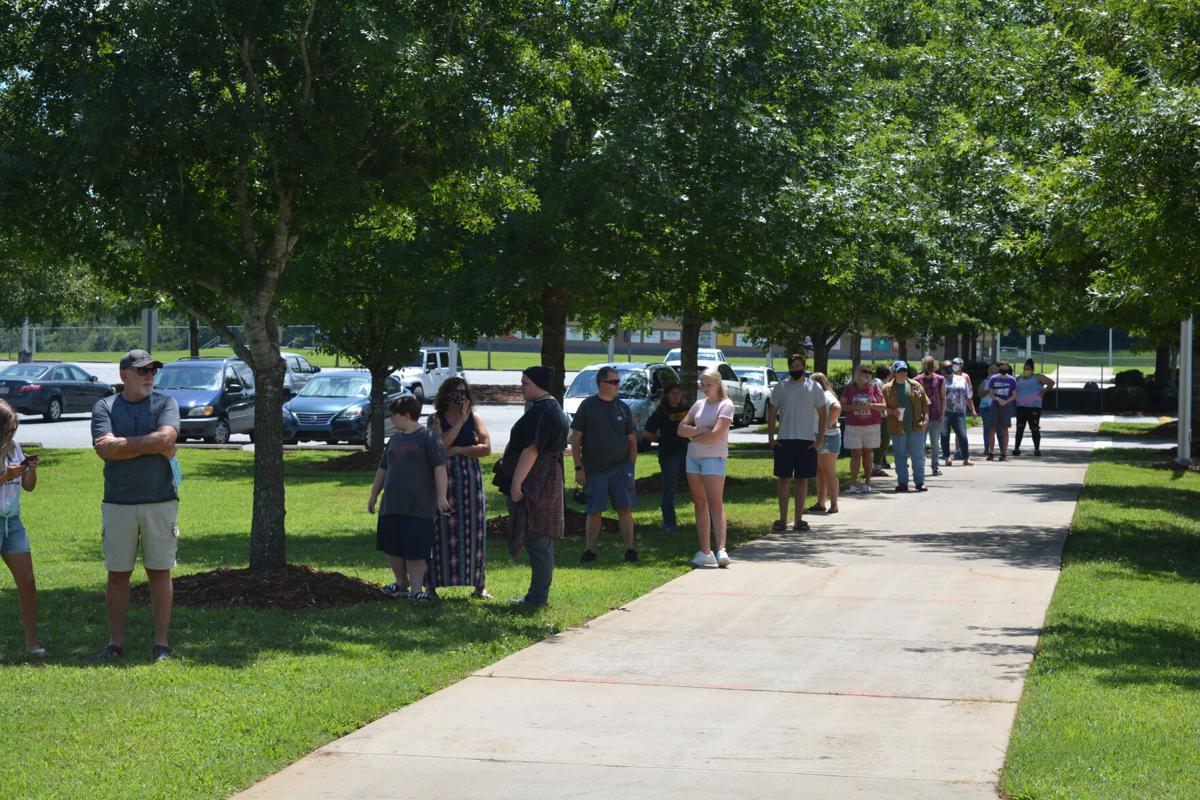 Parents and students line up outside of Patton High School this week to pick up remote learning devices.

Students and parents are in schools to pick up their devices to be used for remote instruction. Students also will receive their schedules for the upcoming school year and can pick up yearbooks if they did not receive them from last school year. Freedom and Draughn high schools handed out devices for its students on Monday, and East Burke and Patton high schools distributed devices Tuesday, while Heritage and East Burke middle schools issued devices Wednesday.

On Tuesday at Patton, parents and students were following social distancing protocols, and the school had a walk-through infrared body temperature scanner that scanned parents' and students’ wrists for their temperatures.

“It’s been great to see faces and make those connections,” Patton principal Sara LeCroy said. “I think the parents are very pleased that they’re going to have access to devices.”

LeCroy said Patton plans to distribute 800 devices, and each student will receive a device. She also said the school is working with local churches and organizations to assist low-income families who may not have the resources to fund the devices, which cost $25 for one, $35 for two, and $50 for three or more.

According to Cheryl Shuffler, BCPS public relations officer, the school system has taken extra efforts to ensure every student’s needs are met. If families have concerns about paying the device fee, they should reach out to the school principal and school counselor.

Many parents have admitted to a fear that they will not be able to assist their children with operating these devices, as they may not be technologically inclined.

According to Honeycutt, the school system plans to offer training to parents. Additionally, the school system has a YouTube channel, called Burke Can Support, where it uploads videos to offer parents guidance on using certain programs, such as ClassLink. Classlink is the single sign-on program that each grade level will use to access coursework.

“Each student has a ClassLink login, which connects them to every (computer) app that they would be using, or anything that they might be using,” Honeycutt said. “I think parents will be better equipped once they watch a few videos.”

Honeycutt said BCPS plans to offer a helpline for students and parents to call.

Shuffler said it is important to remember that while parents may not be as technologically savvy with these computer programs, the students are very familiar with these programs.

“They use (these programs) in class every day,” Shuffler said. “That’s one of the things that I struggled with when my 10-year-old came home in March. She was having to sign on either on my computer or my husband’s computer, and I was trying to figure out where all this stuff was. (My daughter) was like, ‘Oh, you just do this and this.’ So the students know.”

The district purchased Zoom so children can have video conferences with their teachers. As part of a state contract, BCPS will use Canvas as its learning management platform for sixth through 12th graders. For third through 12th grades, students can choose to use Google Classroom also. Honeycutt said some teachers may have both a Google Classroom and Canvas presence, depending on what courses and methods of instruction they may need the programs for. K-2 students will use SeeSaw.

The school system announced Wednesday that its food distribution will take place Mondays and Thursdays starting on Aug. 17, the first day of class. Food will be distributed at Ray Childers, Hildebran, George Hildebrand, Valdese, Mountain View, Mull, Oak Hill, W.A. Young, and Glen Alpine elementary schools and will be available for pickup from 11 a.m. to 1 p.m.

Students will be asked to provide their identification number at meal pickup, and meals are free for those who qualify for free and reduced lunch. The price for elementary students is $2.60 and $2.85 for middle and high school students.

Craven reflects on first year as board member

Though it may seem like significantly longer, nearly one year has passed since Wendi Craven became a member of the Burke County Board of Education.

Local teacher calls it quits after 30-plus years

Band director Carla Draughn has been a fixture in Burke County Public Schools for more than 30 years.

A Burke County Public Schools teacher died unexpectedly in her classroom on Wednesday.

Burke County United Way, with the help of community donors and sponsorships, quickly raised funds for internet hot spots during July, August a…

As Burke County students navigate the world of online learning this school year, one local church is implementing a new program to help them f…

A student at Patton High School picks up his virtual learning device this week.

Students at Patton High School picked up their virtual learning device this week.

Parents and students line up outside of Patton High School this week to pick up remote learning devices.