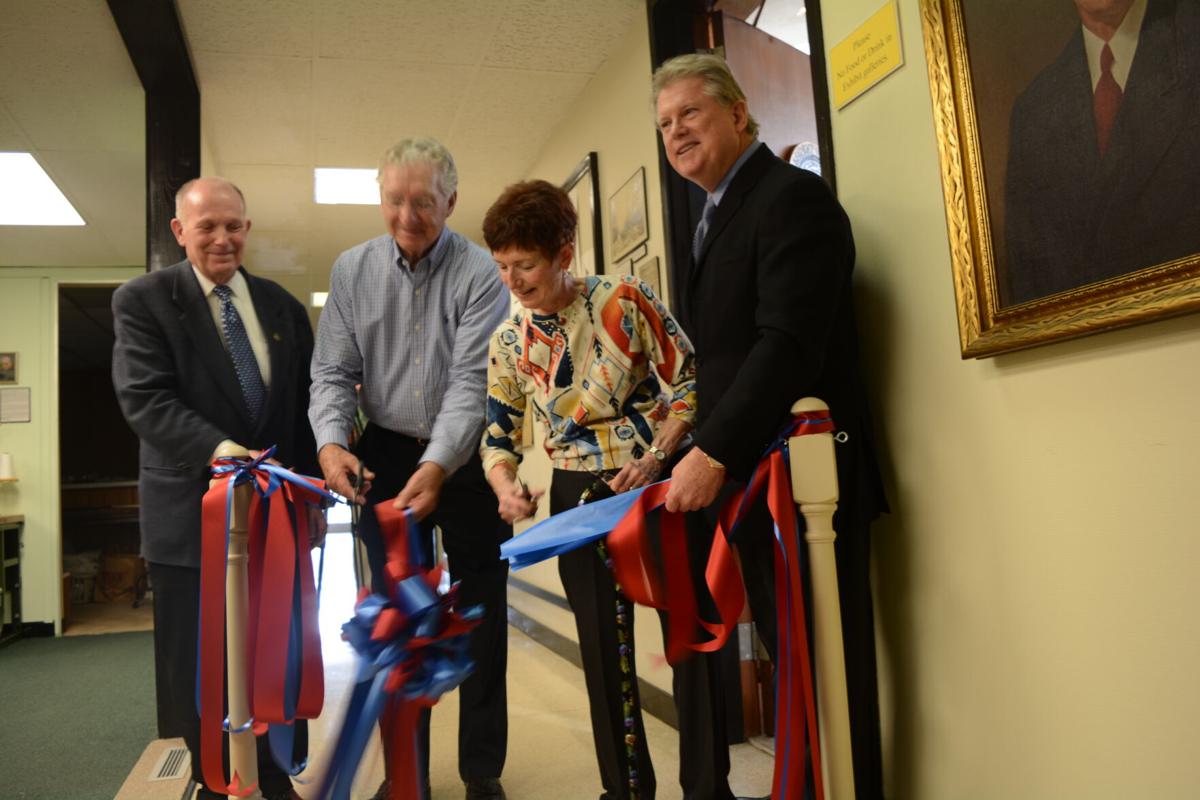 Jim Warlick (right) participates in the grand opening of an exhibit of some of his presidential memorabilia at the History Museum of Burke County in 2016. Warlick is sponsoring an upcoming exhibit at the museum that will feature local mill workers. With him is Judge Claude Sitton (second from left), the executive director of the museum. 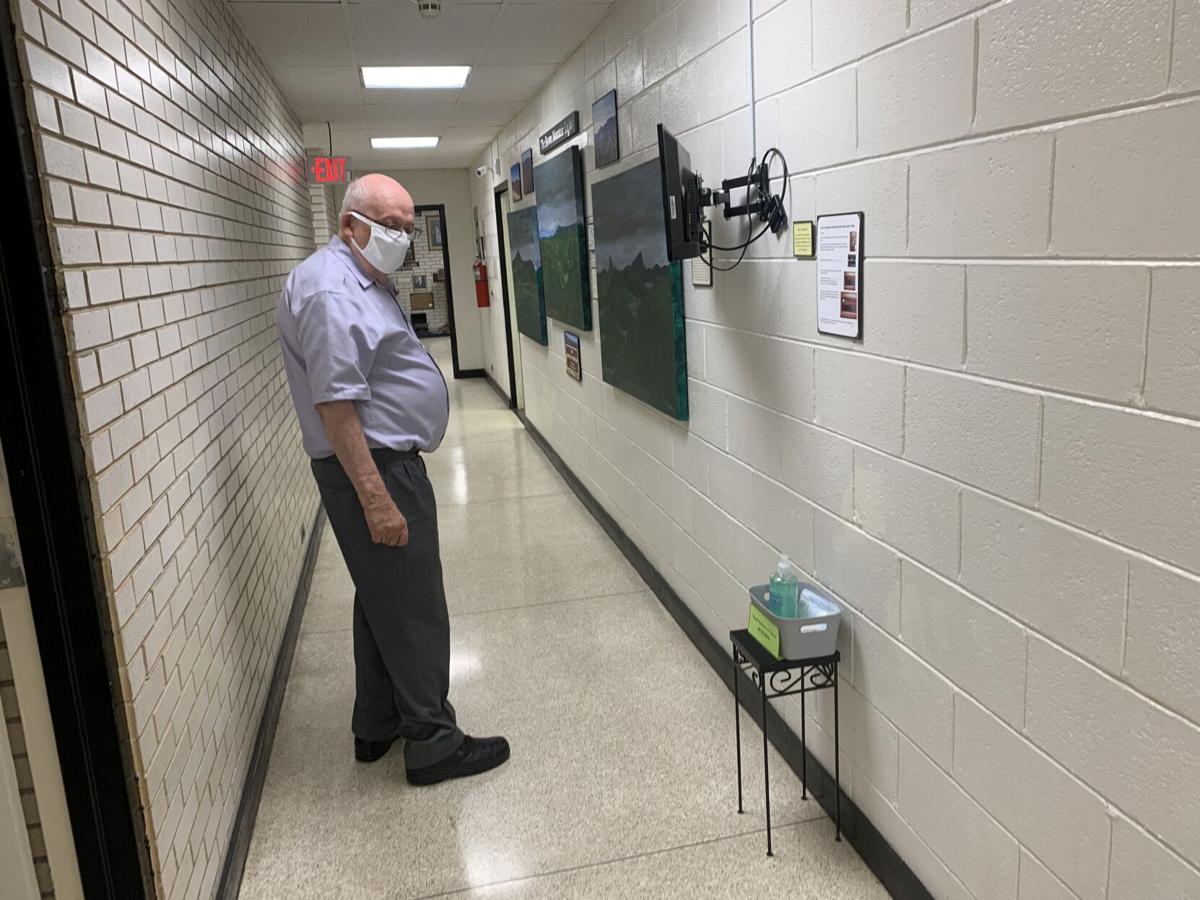 Museum curator Wayne Hitt points out one of the many hand sanitizing stations installed throughout the facility. 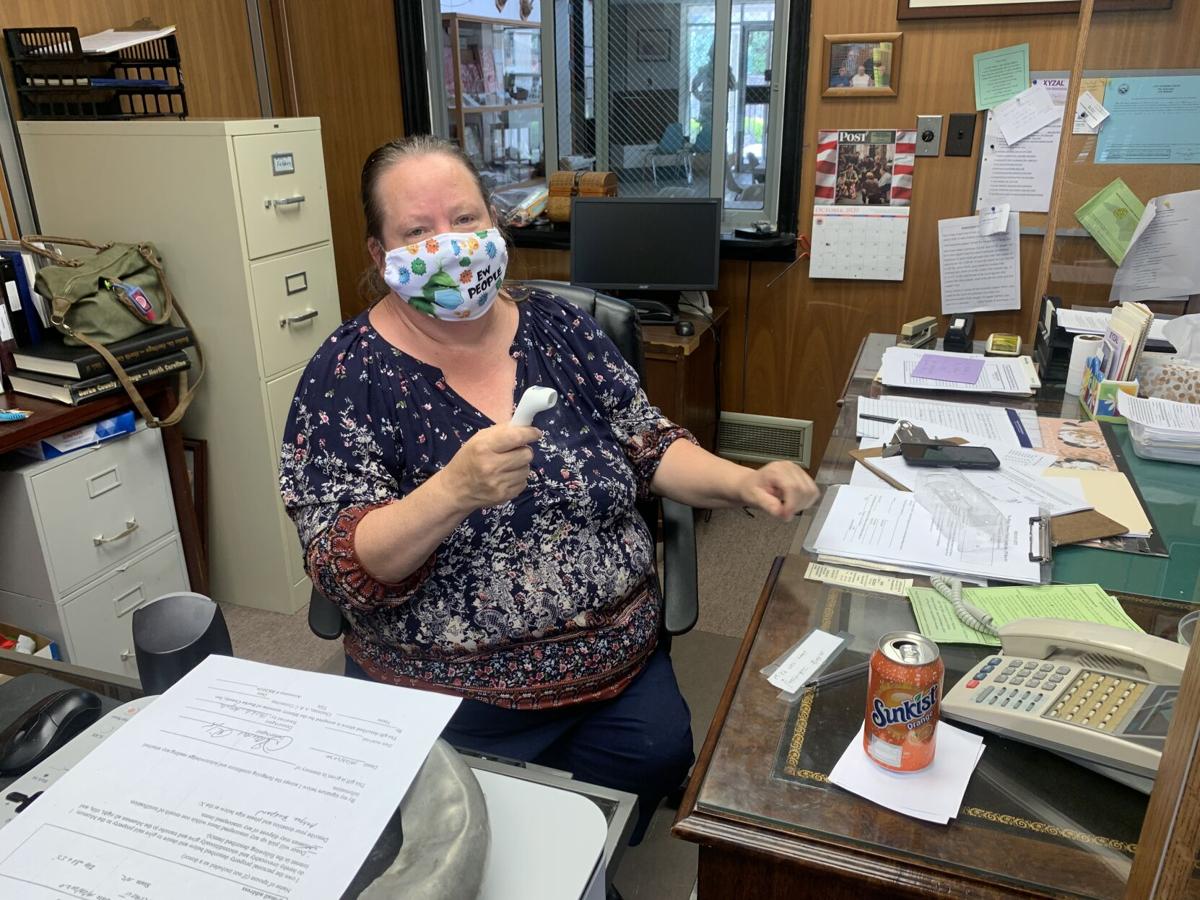 Michelle Fugate, receptionist at the History Museum of Burke County, uses a digital thermometer to check visitors' temperatures when they arrive. 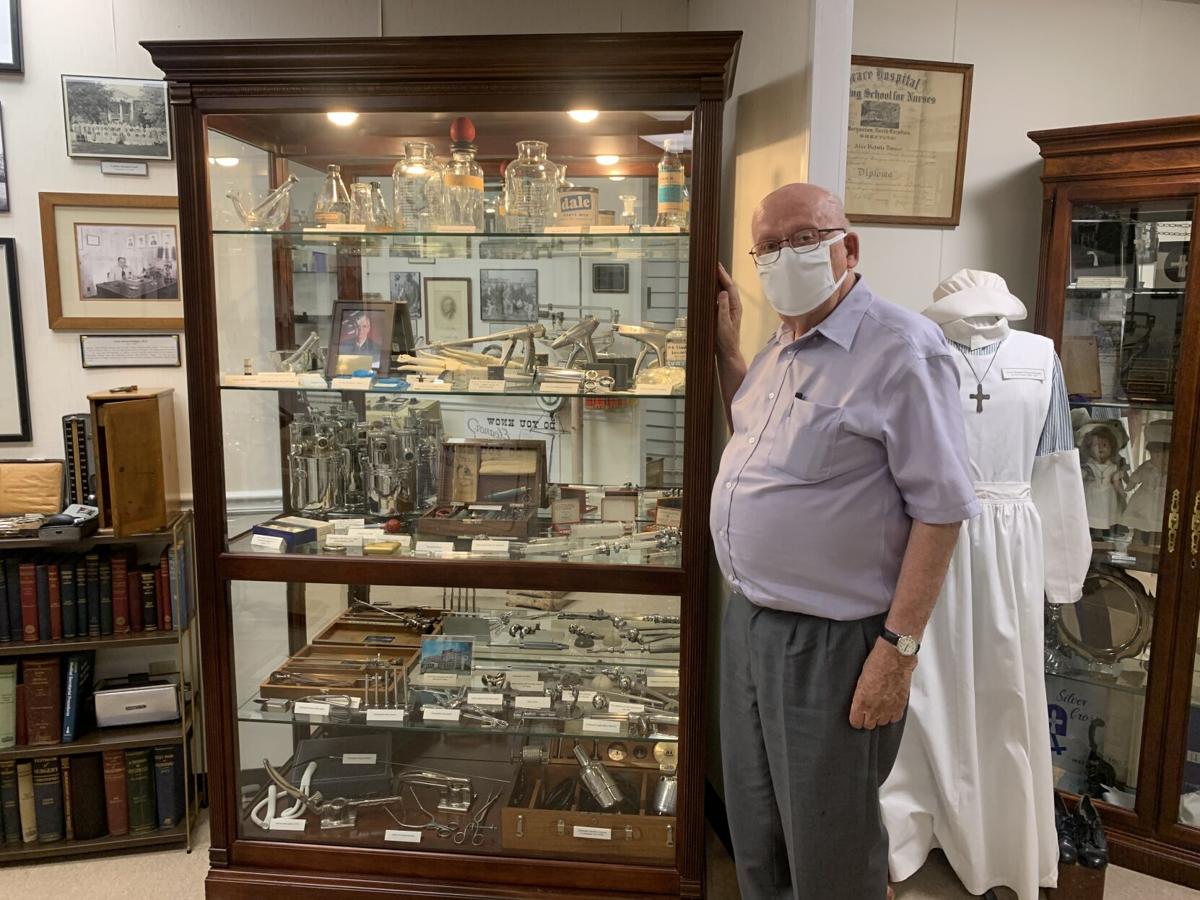 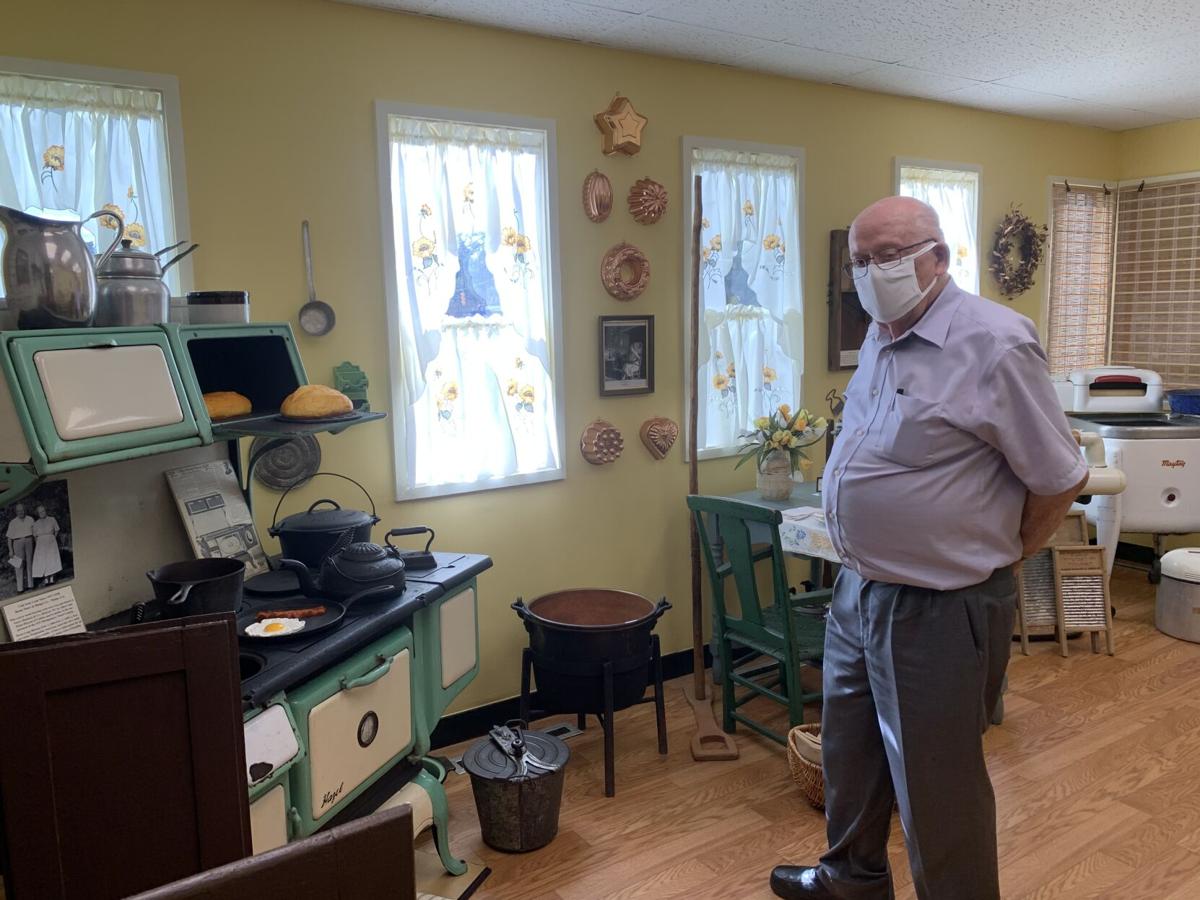 Museum curator Wayne Hitt shows the "Granny's Kitchen" exhibit that had to be repaired after being damaged by a water leak last year.

The History Museum of Burke County will keep its doors closed for the rest of this year, but a lot has been going on behind the scenes there.

The board of directors for the museum decided to postpone reopening until at least early 2021 to help keep people safe during the COVID-19 pandemic, a news release says.

Judge Claude Sitton, executive director of the museum, explained how the board will determine the best time to open.

“The main factor is based on what the local COVID-19 data would be,” he said. “Unfortunately, it seems to be increasing weekly.”

He described how the extended shutdown has affected the museum.

“Being closed and not allowing the general public to tour and not having school students touring has cut back tremendously on our visibility,” Sitton said. “We have written letters to the third- and fourth-grade teachers and suggested that they have students visit our website and Facebook page. This has allowed some interest and visibility. We had our receptionist at the museum answer calls from students and teachers. This has been a success.”

Museum curators and volunteers have taken the opportunity to get some major projects done.

“Considerable work has been done on and in (the museum building and the annex) to address needed repairs, update various exhibit spaces, landscape and to make changes necessary to protect visitors and museum volunteers from COVID-19 when the museum reopens,” board member Linda Lindsey said.

The museum also received $10,000 from the NC CARES Humanities Relief Grant of the N.C. Humanities Council to help with pandemic expenses.

“The emergency grant funding was provided to North Carolina cultural organizations experiencing hardships due to the COVID-19 pandemic,” Lindsey said. “This important funding will support a safe reopening of the museum with the purchases of sneeze guards, wall-mounted hand sanitizer stations, masks and additional cleaning supplies; assistance with payment of utilities; and assistance with remuneration for a part-time administrative assistant and a part-time maintenance technician.”

Sitton said Margaret Hampson, a museum docent and member of its Resource Development Committee, applied for the grant.

“We were pleased with her diligence in seeking and acquiring it for the museum, and grateful to be one of 59 organizations the North Carolina Humanities Council selected for this funding,” Sitton said.

The museum had just recovered from a water leak and a break-in before the pandemic hit, according to its 2019 annual report. Water leaking in the room housing the “Granny’s Kitchen” exhibit caused damage that cost about $3,700 to repair.

Nothing was stolen from the museum during its first break-in, but perpetrators left significant destruction in their wake.

“Two large glass doors were smashed, and glass was everywhere,” Sitton said. “The cost to replace the glass doors was $500 and was not covered by insurance, as that (is the) same amount of our insurance deductible.”

The museum was able to raise funds to cover both repairs.

“The finance members solicited additional donations both orally and with a letter to the membership,” Sitton said.

The museum’s most recent newsletter highlighted a major fundraiser the museum is working on that encompasses a new exhibit on local mill workers and an art installation.

“The inspiration came from Jim Warlick, a close friend of mine and a person who has been a great supporter of the museum for many years,” Sitton said.

Warlick grew up in the Chesterfield community in Morganton and graduated from Oak Hill High School, his biography says. He made a name for himself amassing a vast collection of political and presidential memorabilia and is the owner of the White House Gift Store in Washington, D.C.

“He set up an exhibit of an Oval Office replica at the museum several years ago and his presidential exhibit in our large exhibit room a couple of years ago, which was a great success,” Sitton said.

Warlick shared how he was inspired by his mother, who worked at the Garrou-Morganton Full-Fashioned Hosiery Mills, now the site of Morganton City Hall, for more than 30 years. Noting that the museum did not have an extensive exhibit on local mill workers, he established the Workers' Legacy Foundation to celebrate and honor his mother's life’s work.

The foundation is supporting a “Workers’ Legacy” exhibit at the museum, scheduled to debut sometime after the facility reopens. Warlick also is leading an effort to have a “Dignity of Work” monument installed on the grounds of the museum to commemorate the many mill workers in Burke County.

People can support the project by purchasing a personalized brick that will be installed in a walkway surrounding the monument. The 4-inch by 8-inch bricks are $100 each, and can include up to three lines of text with 18 characters per line, including spaces and punctuation, according to the newsletter. People interested in purchasing one should contact the museum at 828-437-1777 for more information.

Curators also are busy processing a large collection of vintage cameras and photography equipment donated by Carolyn Hart. The collection includes 63 artifacts from the 1920s to the 1960s that belonged to Hart’s grandfather, who was a traveling salesman for Eastman Kodak during that period. Sitton said the museum hopes to turn the collection into an exhibit sometime in the future.

Another museum project people can get involved with is its COVID-19 time capsule. Staff at the museum will collect pandemic-related items for a time capsule. Items suggested include T-shirts, caps, posters, newspaper articles and “anything unusual.”

Sitton said he would like people who open the capsule to remember “the pandemic and just how terrible life was for some and how bad death was for so many families.”

“John was one of the founders, an officer and board member from the beginning of the museum and was chair of the board for seven years,” Sitton said.

He said the award recognizes a person “who has rendered singular, extraordinary and/or exemplary service to the History Museum.”

To learn more about museum events, visit thehistorymuseumofburke.org or the “The History Museum of Burke County” Facebook page. A post on the Facebook page said the museum is allowing tours by appointment by calling 828-437-1777. All COVID-19 protocols will be observed, and visitors will be required to wear masks.

Lindsey said the board and staff of the museum look forward to reopening when it is safe to do so.

“The situation is being carefully monitored,” she said. “Some museum staff may be working on future exhibits between 10 a.m. and 4 p.m. Tuesdays through Fridays and will be glad to respond to questions by phone or email. There will be a major new exhibit opening in 2021, as well as modifications to existing exhibits the board believes visitors will enjoy.”

GAMEWELL — Thanks to a devout customer base that has gone hog wild on its food, JD’s Smokehouse is growing.

The Morganton Downtown Development Association invites the community to join one of downtown’s most cherished holiday events, the annual Morga…

When it comes to winter weather forecasts, most people have one simple question.

Cases of COVID-19 in Burke County have grown by more than 50 in one day once again and hospitalizations rose again as well.

Cases of COVID-19 in Burke County continue to climb.

WATCH NOW: What are you thankful for?

What are you thankful for this year?

Jim Warlick (right) participates in the grand opening of an exhibit of some of his presidential memorabilia at the History Museum of Burke County in 2016. Warlick is sponsoring an upcoming exhibit at the museum that will feature local mill workers. With him is Judge Claude Sitton (second from left), the executive director of the museum.

Museum curator Wayne Hitt points out one of the many hand sanitizing stations installed throughout the facility.

Michelle Fugate, receptionist at the History Museum of Burke County, uses a digital thermometer to check visitors' temperatures when they arrive.

Museum curator Wayne Hitt shows the "Granny's Kitchen" exhibit that had to be repaired after being damaged by a water leak last year.