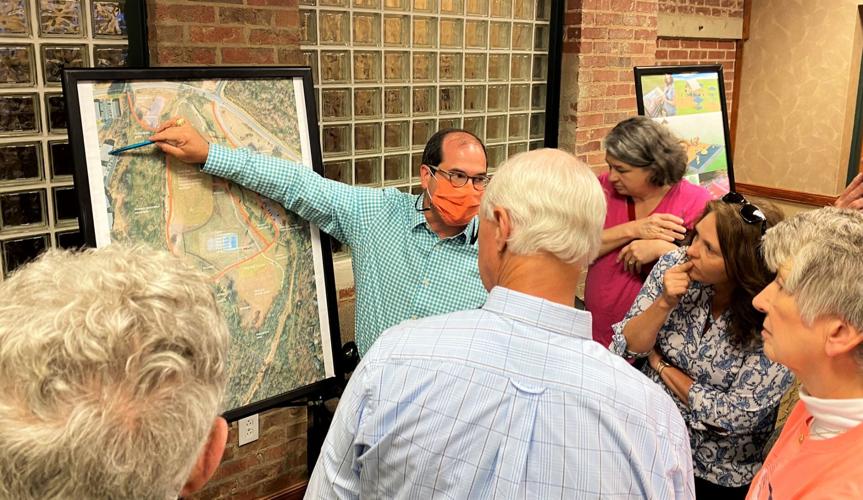 Michael Burley points to a map that shows some of the changes that could be possible at Bethel Park. 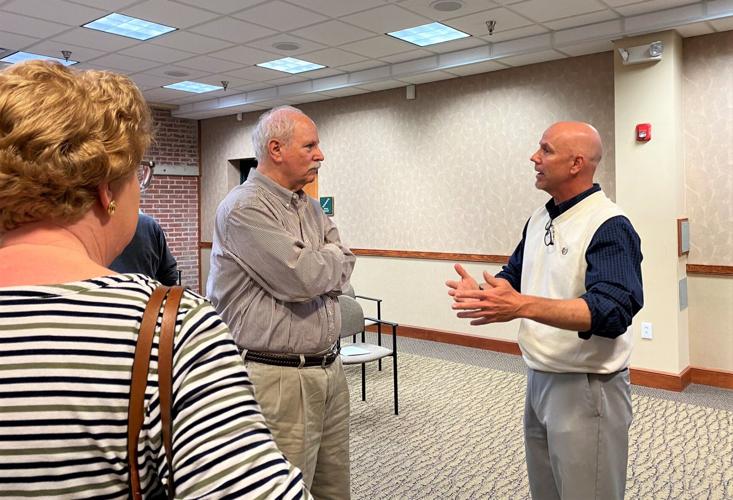 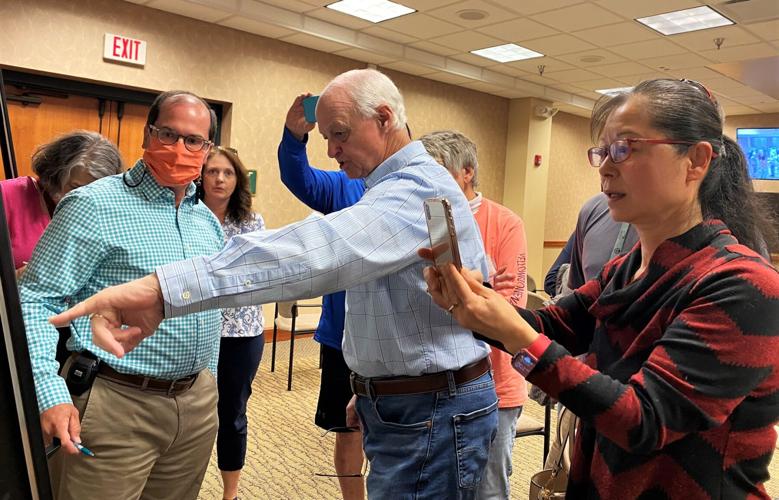 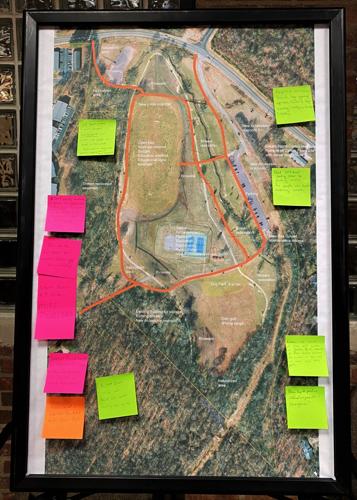 Sticky notes with suggestions from residents for changes at Bethel Park cling to a mockup of what the park could look like after it undergoes stream restoration and renovation projects.

The ball is rolling a little faster now on a multiyear, multiphase stream restoration and park renovation project at Bethel Park after a pair of meetings Monday.

The city already has received a $500,000 grant from the N.C. Land and Water Fund, and it already has budgeted $409,107 in matching funds and another $278,203 for in-kind work city employees would perform to assist with the first phase of park improvements. Staff members also will apply for a $500,000 grant from the N.C. Parks and Recreation Trust Fund to help with renovations that will be necessary after the stream restoration project is finished.

“We know this is one of our most densely populated parks,” Rob Winkler, Morganton parks and recreation director, said. “It’s got a lot of different users and different opportunities at this park, and we’re very well aware of our flooding issues. It’s getting more and more common, and a lot of that is because of our stream impairment.”

Phillip Lookadoo, director of development and design for the city, showed photos of the current state of the streams at Bethel Park, where the banks of a stream have continued to erode when heavy rains send water rushing through them and spilling over the stream banks.

He said the city previously contracted with Wildlands Engineering to conduct a storm water and ecological study of the two streams in the park, Fiddlers Run and the east prong of Hunting Creek. That study determined the city’s efforts to reduce the impact of flooding on the park could best be addressed by a stream restoration project.

The project will aim to increase stream capacity by building out the creek banks in step-like shapes, Lookadoo said. Plants, boulders and other natural materials also will be strategically placed throughout the creek to help filter sedimentation and improve the habitat, he said.

The same will be done with the bioswales in the park, which are meant to help water that collects in the park drain faster, Lookadoo said.

Flooding still will be possible at the park in heavy rain events, Lookadoo and Winkler said, but the restoration project should make it so that any water that does overflow from the creek banks will recede faster.

The stream restoration will impact the amount of usable space in the park, and it likely will require that some of the park’s amenities be relocated, Winkler said, including three of its most used amenities: The walking track, the dog park and the playground equipment.

But it’s looking to be an expensive undertaking. The stream restoration project alone will be about $1 million, and Winkler said the staff estimates that relocating the walking track will cost about $750,000 — and that’s with dropping the track in size from three-quarters of a mile to a half mile.

That’s why the city is planning for the project to take place over multiple phases.

Some other things staff have considered adding to the park are shade areas, picnic shelters, workout stations around the walking track and an educational station for residents to learn about the streams and their impact on the park’s ecosystem, Winkler said.

They’ve also considered putting a fence around the park’s basketball court and turning it into a combined basketball and soccer court so balls wouldn’t end up getting kicked into the park’s streams, he said.

The bathrooms likely will be moved to another location in a later phase of the project, Winkler said.

Attendees of Monday’s public meeting were invited to leave sticky notes on images staff had displayed at the meeting and offer comments at the tail-end of the meeting.

Some of the notes left expressed concerns over losing space for the soccer field, whether the disc golf course would be able to stay without interfering with the walking track, the potential loss of length for the walking track and a need for seating areas closer to the parking lots. A couple of notes spoke against exercise stations around the walking park, and one asked for more pickleball space.

City staff will be applying for a $500,000 grant from the North Carolina Parks and Recreation Trust Fund to help with renovations at the park. Monday’s meeting was one of the requirements of the grant, and it saw a turnout that nearly reached the point of standing room only.

“It was a great turnout,” Winkler said. “It just proves how important the park and the project is, and how many citizens utilize that park and what a priority it is for them as well.”

He said people still can send in their comments on things they’d like to see brought to the park by calling the recreation department at 828-438-5350. Visit morgantonnc.gov/parksrec to find other ways to contact the department.

The decision handed down Friday by the U.S. Supreme Court to overturn Roe v. Wade and return abortion access to the states’ hands brought mixe…

Next fiscal year’s proposed budget for the city of Morganton shows only two rate increases, with the tax rates remaining the same.

Roadside marker to be unveiled for historically Black neighborhood

A Morganton neighborhood will receive a historical marker this weekend.

The Morganton City Council approved its budget Monday night, along with a handful of other items.

Members of the Morganton City Council set a special meeting to vote on the proposed budget during Monday night’s meeting.

At least six hikers killed during glacier collapse in Italy

At least six hikers killed during glacier collapse in Italy

Michael Burley points to a map that shows some of the changes that could be possible at Bethel Park.

Sticky notes with suggestions from residents for changes at Bethel Park cling to a mockup of what the park could look like after it undergoes stream restoration and renovation projects.