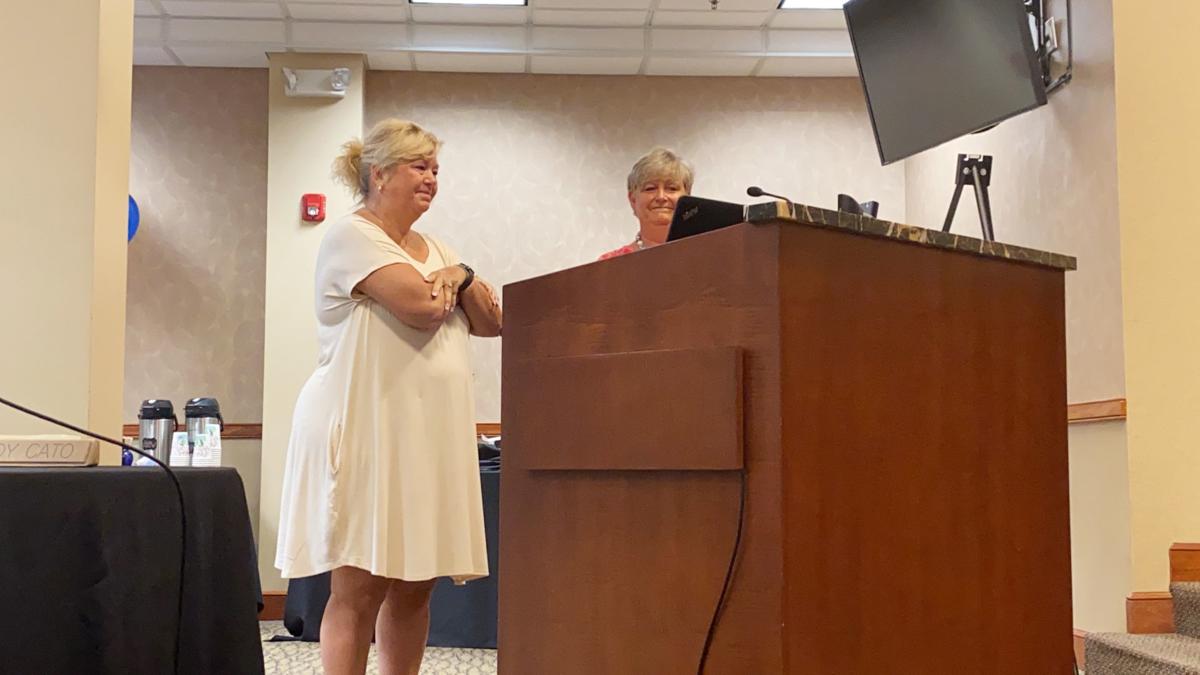 Sharon Jablonski (left) and Sally Sandy watch a Zoom call announcing that Jablonski received a national award for her work in downtown Morganton. 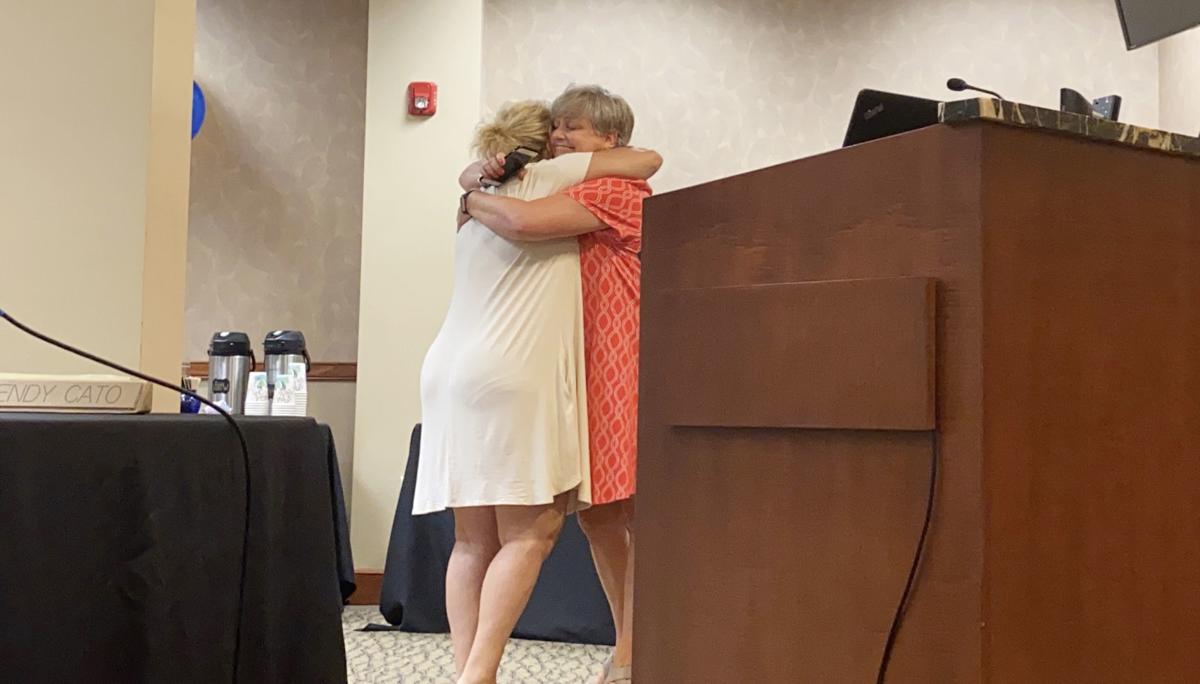 Jablonski (left) and Sandy hug after Jablonski was told about the award. 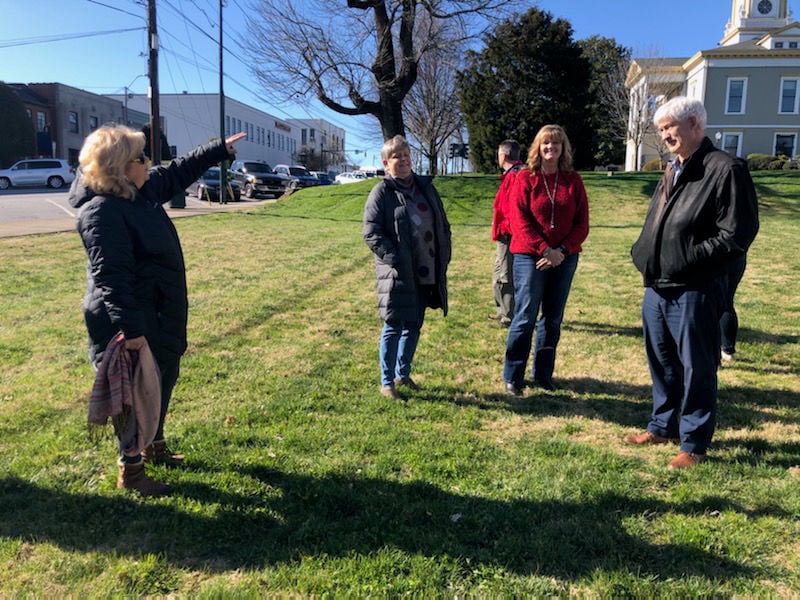 Main Street Director Sharon Jablonski (left) shows council members and city officials what she expects the layout of the renovated Courthouse Square to look like during the council's 2020 workshop.

Sharon Jablonski didn’t know what to expect when she was asked to step up to the podium in the Morganton City Council chambers after a meeting Thursday morning.

Whatever she expected, it couldn’t have compared with finding out she was the inaugural winner of a new, national award for her role as the city’s Main Street director.

Jablonski was told during a Zoom call that she had been nominated for the Mary Means Leadership Award from Main Street America.

“I am shellshocked,” Jablonski said.

The award was supposed to be announced at the Main Street America’s May conference in Dallas, but the conference had to be cancelled because of the COVID-19 pandemic.

Mary Means was the founder of Main Street America, said Patrice Frey, president and CEO of the organization. Means was a member of the award’s selection committee.

“Mary is somebody who had just extraordinary vision and extraordinary tenacity, and so in awarding this honor, we really looked for somebody who embodied those characteristics,” Frey said. “We reviewed dozens of applications and you, you really stood out in the pack as embodying the real spirit of the Mary Means Leadership Award.”

She said the selection was impressed by many of Jablonski’s accomplishments over her nearly 30 years working as the city’s Main Street director, including the way she has worked with the community to transform downtown Morganton.

“I think the thing that really stood out was the way that you have just built extraordinary relationships and extraordinary public-private partnerships which has translated into such fantastic (inaudible),” Frey said. “Main Street needs leaders like you to carry on the tradition.”

“I can’t imagine a more deserving individual,” Parham said. “You and I have been friends for 30 years now, but as I’ve told you numerous times, the work you do in Morganton exhibits leadership in every sense of the word.”

“This is huge, because I feel like I’m also representing North Carolina,” Jablosnki said. “I don’t know what to say but thank you … I’m out of words, for once.”

“I’m just one person in an office and the team is phenomenal, so thank you, thank you,” she said.

Finding out she received the award was all the more special since City Manager Sally Sandy kept it a secret — only a select few city staff members knew about the award.

“She has put all of herself into this and worked so hard for decades to make downtown Morganton special, and it is,” Sandy said. “She does exemplify everything you look for in a Main Street champion … we’re proud all the time, but we’re really proud now that Sharon is representing North Carolina.”

Multiple recommendation letters were written. A letter penned by Cohen described Jablonski’s efforts to make Morganton “a destination of choice.”

“As the Morganton Mayor for 30-years (1985-2015) and a dedicated champion for downtown Morganton, I can think of no one else who has lived, breathed, and transformed downtown more than Sharon,” the letter said.

He said downtown Morganton became what it is today because of Jablonski’s work at the helm of the Main Street department.

“Downtown Morganton is a thriving downtown in small, rural America because Sharon Jablonski has spent the past 28 years inspiring partnerships between the public, private, and non-profit sectors to believe in and invest in downtown Morganton,” Cohen wrote. “Her passion, drive, and unrelenting personality allow Sharon to drive success and growth in Downtwon Morganton.”

He said Jablonski knows exactly what to do to help Morganton succeed.

“I would go as far as to say, in Morganton, Sharon Jablonski is synonymous with Downtown,” Cohen wrote. “The two are indistinguishable; no matter where she goes or what she does or who she is with, she IS Downtown Morganton.”

Keeping it a secret was hard, but it was worth it. Jablonski was even able to celebrate with her family, including her daughter, Cayla, who Zoomed into the meeting from her home in Virginia to help honor her mom.

“I am absolutely blown away,” Jablonski told The News Herald. “[I had] no idea.”

Jablonski said she has had the chance to work with Means, the award’s namesake, in the past.

“To be the first one [to receive the award] is huge, and to be named in her honor I mean, I’m really at a loss,” Jablonski said. “I just can’t believe it.”

She didn’t want to take all the glory for the award.

“I know I won the award but again, it’s really this incredible team that I work with,” Jablonski said.

An eerie quiet has settled over Martha’s Park this summer.

Sharon Jablonski (left) and Sally Sandy watch a Zoom call announcing that Jablonski received a national award for her work in downtown Morganton.

Jablonski (left) and Sandy hug after Jablonski was told about the award.

Main Street Director Sharon Jablonski (left) shows council members and city officials what she expects the layout of the renovated Courthouse Square to look like during the council's 2020 workshop.