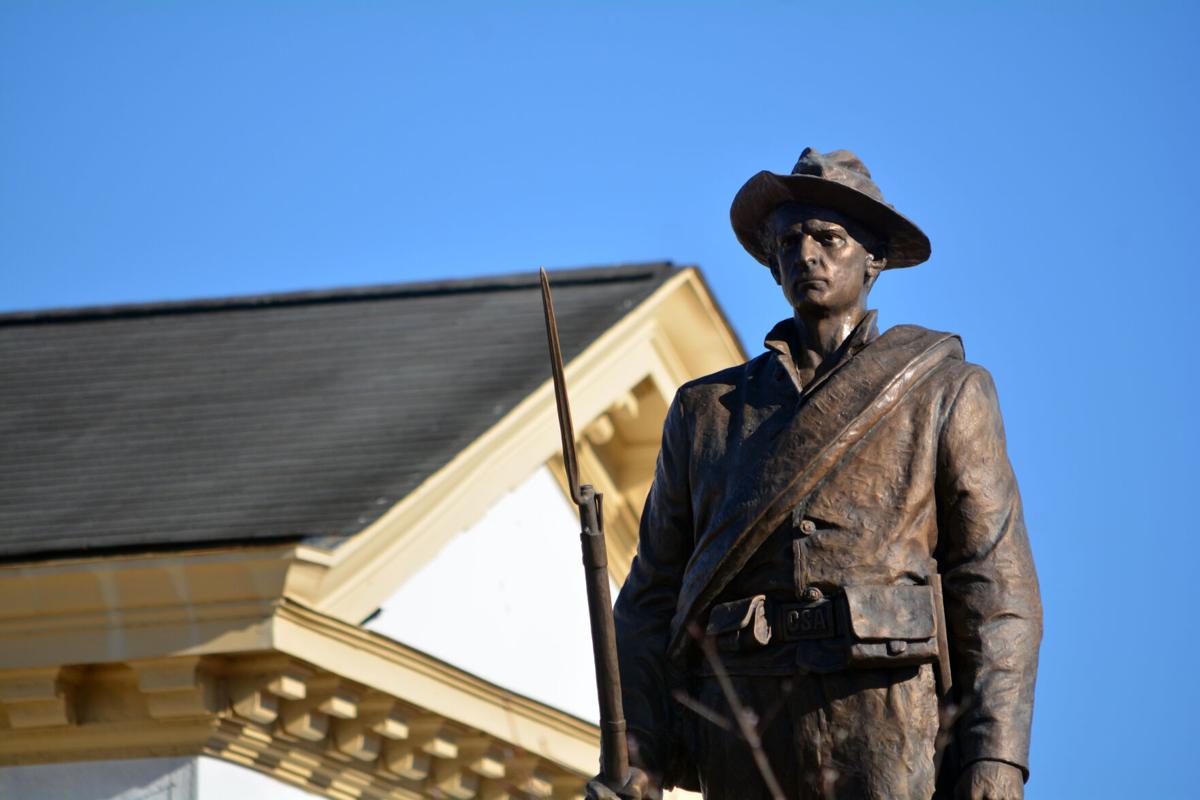 The statue of a Confederate soldier has loomed over Morganton since it was erected in 1918, more than 50 years after the end of the Civil War. 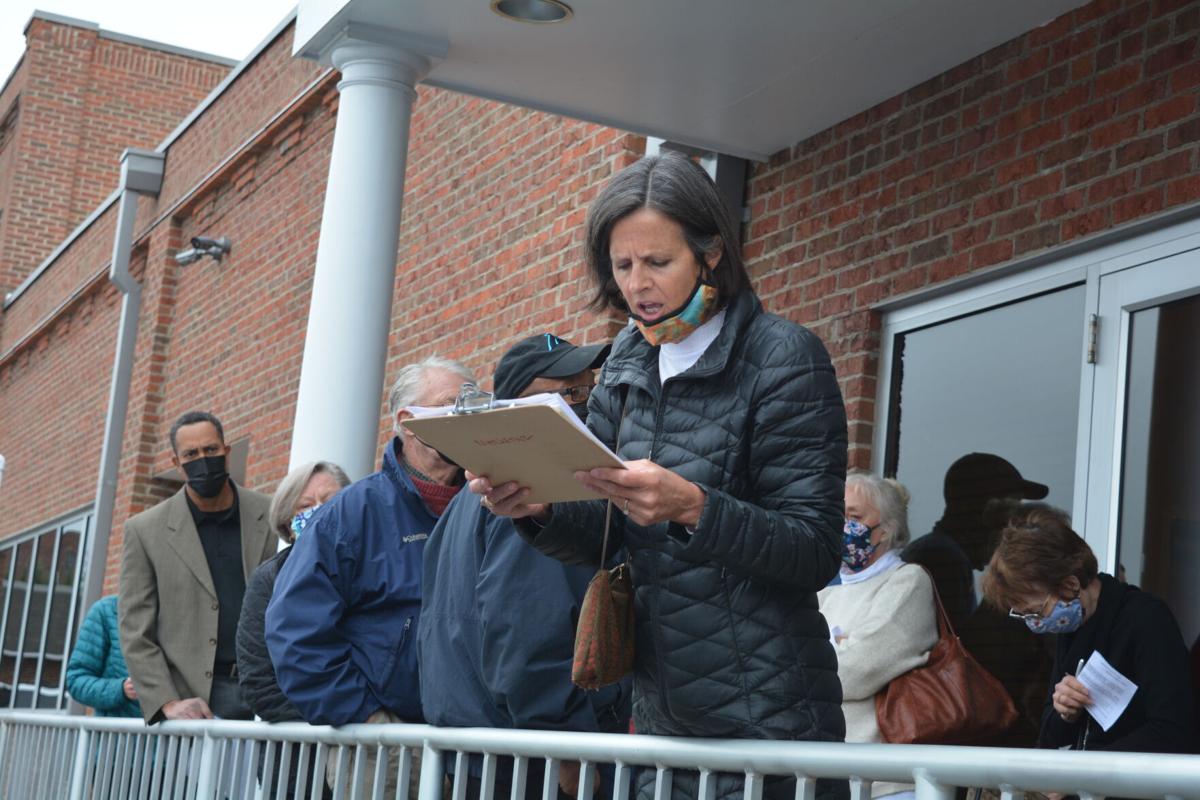 Caroline Avery, front, reads off a list of people signed up to address the Burke County Board of Commissioners at Tuesday night’s meeting. 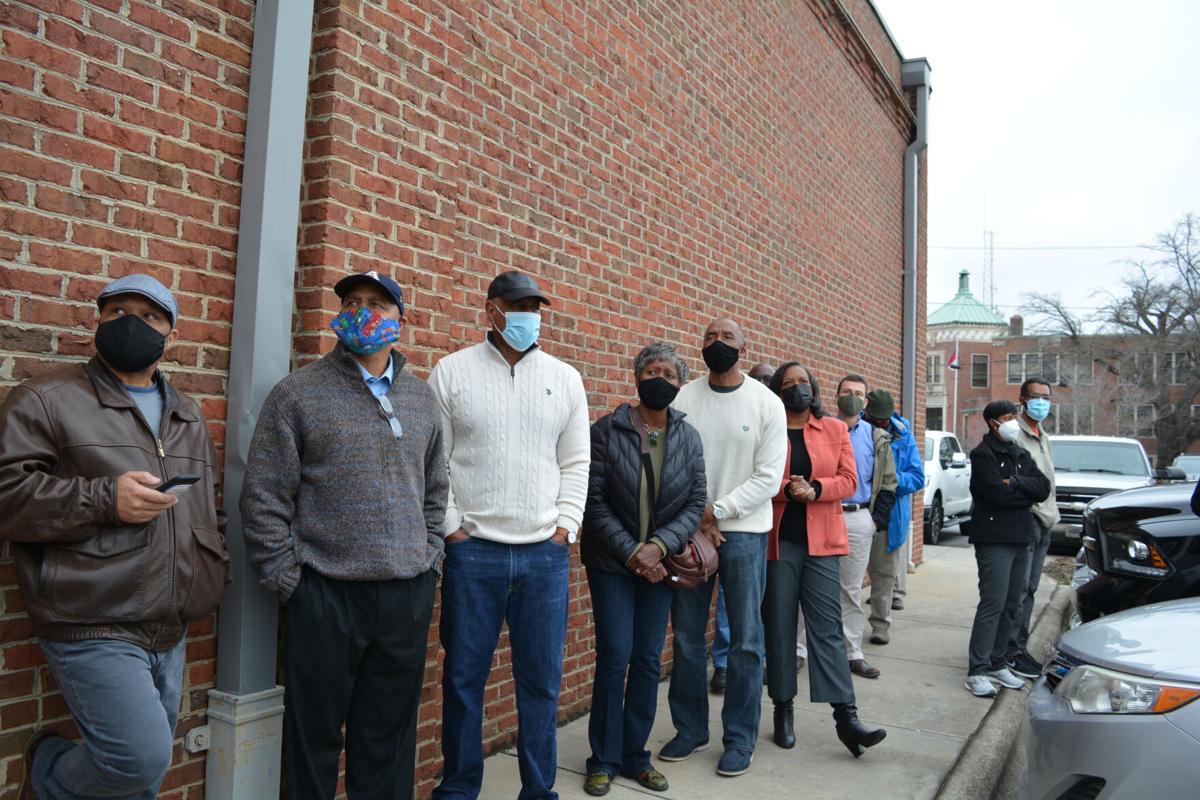 People stand in a line outside of the board's meeting room Tuesday evening. 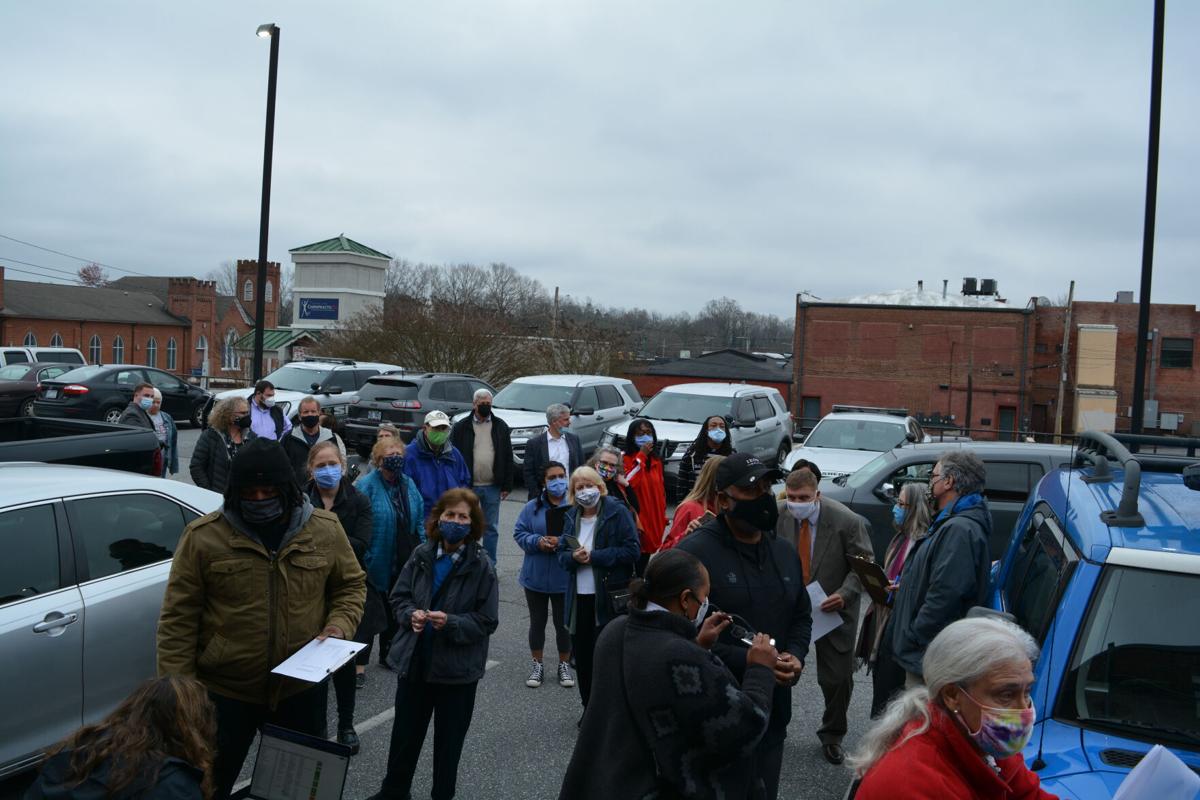 Another group of people stand in the parking lot outside of the board's meeting room Tuesday.

One by one, more than 60 people stood before the Burke County Board of Commissioners during Tuesday night's meeting to ask it to remove the Confederate statue from Morganton’s Historic Courthouse Square.

By The News Herald’s count, about 65 people asked the commissioners to remove the statue. Others chose to stand and forego speaking, and handful of people spoke on behalf of their spouses, too. Another wrote a letter that was read into the record.

Allen Fullwood, a great-grandson of an enslaved person born in Burke County in 1845, was one of those who made public comments, focusing his message on the future of education in Burke County and the N.C. School of Science and Mathematics.

“At a point following the announcement of the selection of Burke County becoming the home of the western campus of the School for Math and Science, on at least two occasions, Mr. Kevin Baxter and I spoke of the wonderful opportunity the educational institution would provide for a diverse faculty and student body,” Fullwood told the board. “It certainly appears that that opportunity has been severely affected by the prominent display in our community of symbols of the Confederacy — flags on a major corridor and the monument in historic downtown Morganton.”

Baxter is the vice chancellor and chief campus officer at the school’s western campus in Morganton.

“Mr. Baxter has shared with me his recent experiences, and has permitted me to share those, and I quote, ‘The School for Math and Science has lost a number of potential leadership positions due to the presence of Confederate emblems in our county,’” Fullwood said. “How many dreams will be deferred for potential faculty and support staff? How many dreams will be deferred for deserving students whose parents do not feel their child deserves exposure to these symbols and their historic intent? The question has occurred to me, had decision makers been aware of such blatant symbolism in our county, would Burke County be the home of this prestigious educational institution?”

In restaurants, he said, people serve all kinds of people, regardless of their racial or ethnic background. That’s the way he wants things to be in Burke County, but the statue prohibits that.

“When I walk out that door (at Uncle Eees), when that stage has been built in August or July, I’m going to look across to my left, and I’m going to see this statue, and it’s going to remind me, that as a minority, that I couldn’t, my ancestors couldn’t, go sit in the front of a restaurant and be served,” Davidson said. “I had to drink from a different water fountain, I had to use a different bathroom. I had to do the most subservient jobs. I couldn’t be equal. So I appeal to all of you, now is the time to include everyone. We want everyone to come to Morganton and join this beautiful community as I did coming from Black Mountain.”

Among them was Elgie McGalliard, who said he can trace his Burke County heritage back to 1750. He said the statue should stay on the square.

“There’s no better place than where it is sitting at the present time,” McGalliard said. “This is for the old Confederate soldiers who went to enlist then went off to the war of northern aggression. After the war, the citizens wanted to remember the Confederate soldiers, so the county, along with its citizens and the old soldiers, paid their money and their pensions for the monument to be erected.”

He said people come from “near and far” to look at the nameplates and find their ancestors’ names on the statue, and he asked where people would go to examine that ancestry if it wasn’t prominent on the square. He also said those soldiers wanted to be remembered.

“But now we have a lot of foreigners come in, we got some carpetbaggers come in here after the war,” McGalliard said. “They always making problems, causing problems. They don’t have nothing to lose by having this statue taken down. And we have the scalawags, that’s people in the local community that are turning their backs on their own ancestors. So, you know, we’re fighting a battle here with people that don’t have nothing to accomplish by keeping that statue there.”

But McGalliard wasn’t the only person in attendance with Confederate ancestors.

One such speaker was William Russ, who said he was born and reared in Morganton.

“I have several ancestors engraved on the Confederate monument, including heritage from the Duckworth and Causby lines,” Russ said. “My third-great-grandfather, Thomas Duckworth, enlisted with the Confederacy in July 1862 in Company C. This monument is an important part in the history of Burke County, but the time has come to remove it from center of Morganton. I am in favor of removing the Confederate monument from the courthouse lawn.”

Mike Logan, a Vietnam-era veteran who said he served in Afghanistan, spoke with his wife at his side, telling the board that he wasn’t against the soldiers the statue represented.

“I’m not against those soldiers,” Logan said. “I’m a soldier for life. They’re real soldiers. What I’m against is the cause. When I went to Afghanistan, this country, we fought together.”

That statue, Logan said, does not make him feel united.

McGalliard also asserted that Lucifer had “gotten into some of our churches,” causing some local pastors to put “hate comments” in the newspaper.

That may have been in response to a letter to the editor a group of local clergy wrote to The News Herald asking local leaders to remove the statue in July.

The Rev. George Logan was one of the signers of the letter. He spoke to the commissioners at Tuesday’s meeting, starting off with Scripture.

“And it says this in Joshua, chapter five, verses 13 and 14,” the pastor said. “Now when Joshua was near Jericho, he looked up and saw a man standing in front of him with a drawn sword in his hand. Joshua went up to him and asked, ‘Are you for us or for our enemies?’ And the man replied, ‘Neither,’ he says, ‘but as commander of the army of the Lord I have now come.’ Then Joshua fell face down to the ground in reverence, and asked him, ‘What message does my Lord have for his servant?’”

He told commissioners that it “may be advantageous, and even vitally important,” for the board to seek God’s voice for its guidance.

“As commissioners of our county of Burke, you, too, are being asked the same question (Joshua asked), and I hope the response is the same and that is neither,” Logan said. “It seems to me that something of a spiritual nature is happening in our country right now. God is drawing man’s attention to what I believe is the core issue of this country, and that is racial division. Given the weightiness of the issue, I would ask that you please place this concern on the county commissioners’ agenda, and thus begin a discussion about the worthiness of this particular monument and the statue … being in our community as a symbol for what we stand for.”

He finished his comments by asking commissioners to remove the statue from the square.

“If indeed, in this very hour, God is drawing our attention across our nation to this longstanding divide, are we, in this county, and you, as county representatives, seeking a stance of neither side, or merely passively resting on the side of the status quo?” Logan said. “Could the removal of the Confederate monument and the statue be God’s plan for Burke right now? Could it also be possible that to do nothing, we are, in essence, resisting the will of God, thus should we insist on siding with those whose will it is to keep it in the public square? County commissioners, I stand here along with all who have come before you this evening and say emphatically that I am in favor of the removal of the Confederate monument and the statue that lies ahead of it.”

With about 70 comments made, the vast majority of them in favor of removing the statue, board Chair Jeff Brittain thanked everyone for voicing their opinions.

“Let me say again that I, and I speak for this board, that we appreciate the message that each of you have brought tonight regardless of how you have positioned yourself,” Brittain said. “We’ve heard from both sides of this issue, we’ve heard from many different thoughts and opinions, and I want to assure you that this board has heard, and that we will move forward and continue to deliberate on this matter and do the best we can to consider that going forward.”

The commissioners will have their next regular board meeting April 20, with its pre-agenda meeting to be held April 6.

The statue of a Confederate soldier has loomed over Morganton since it was erected in 1918, more than 50 years after the end of the Civil War.

Caroline Avery, front, reads off a list of people signed up to address the Burke County Board of Commissioners at Tuesday night’s meeting.

People stand in a line outside of the board's meeting room Tuesday evening.

Another group of people stand in the parking lot outside of the board's meeting room Tuesday.