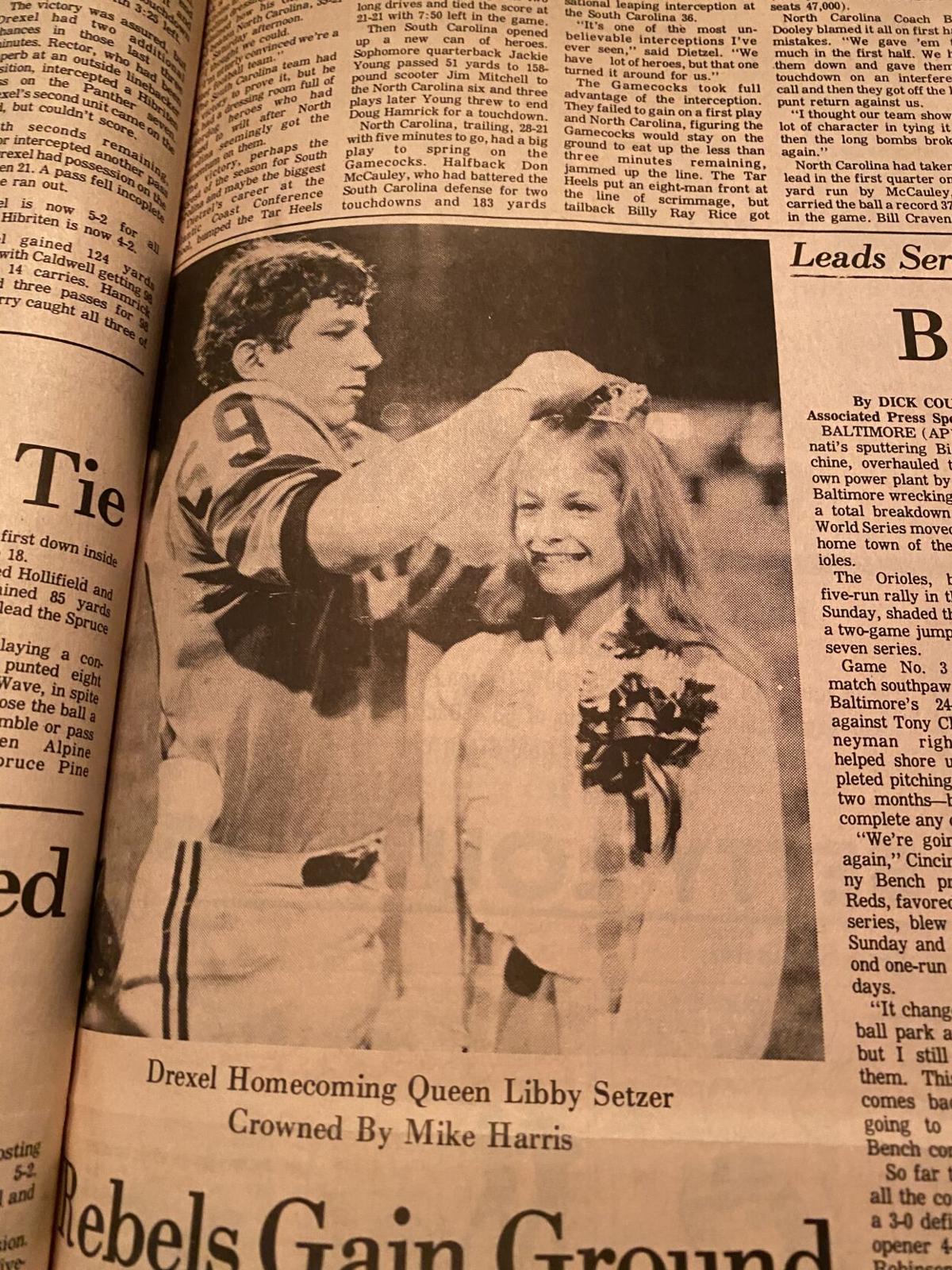 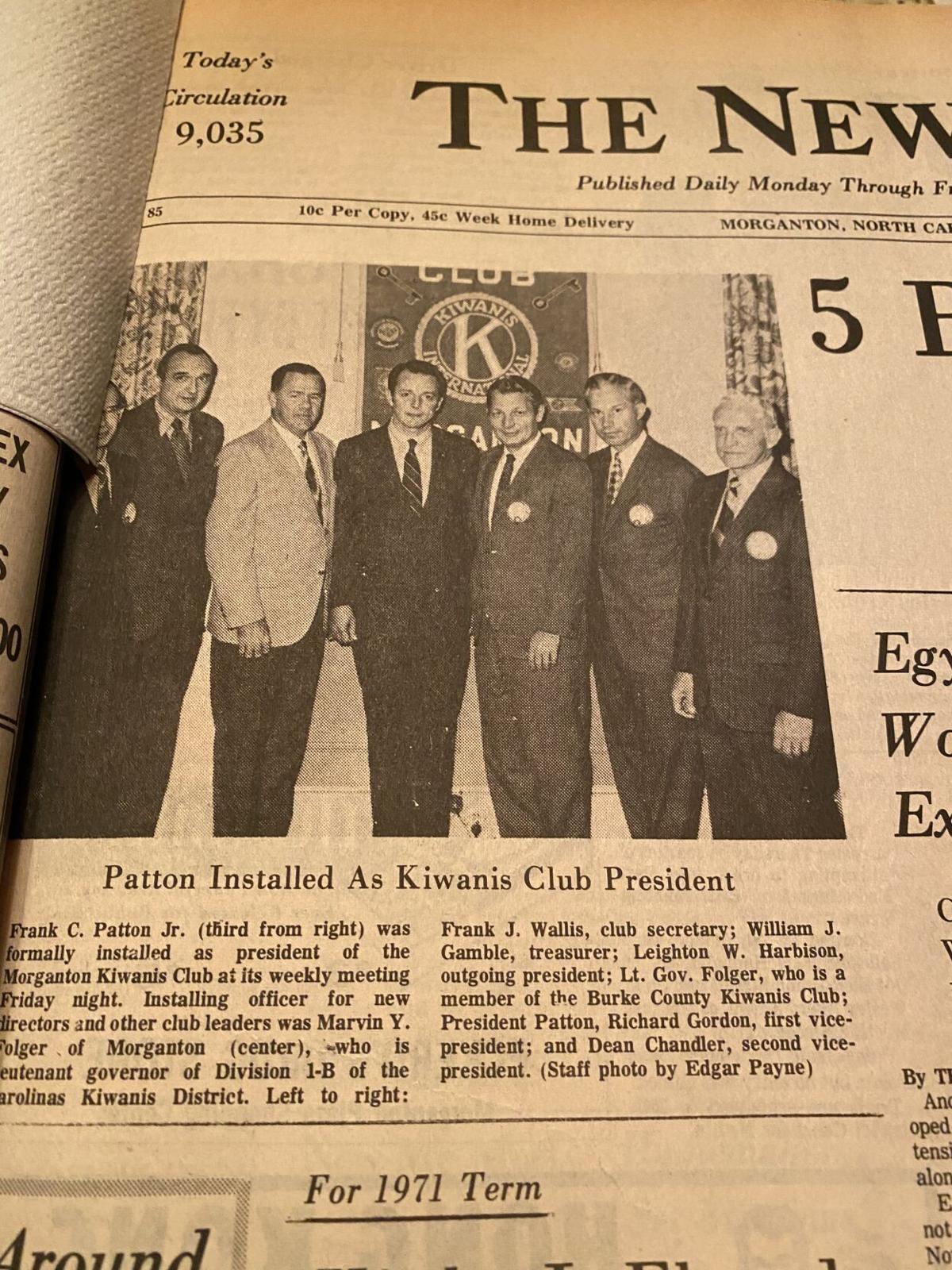 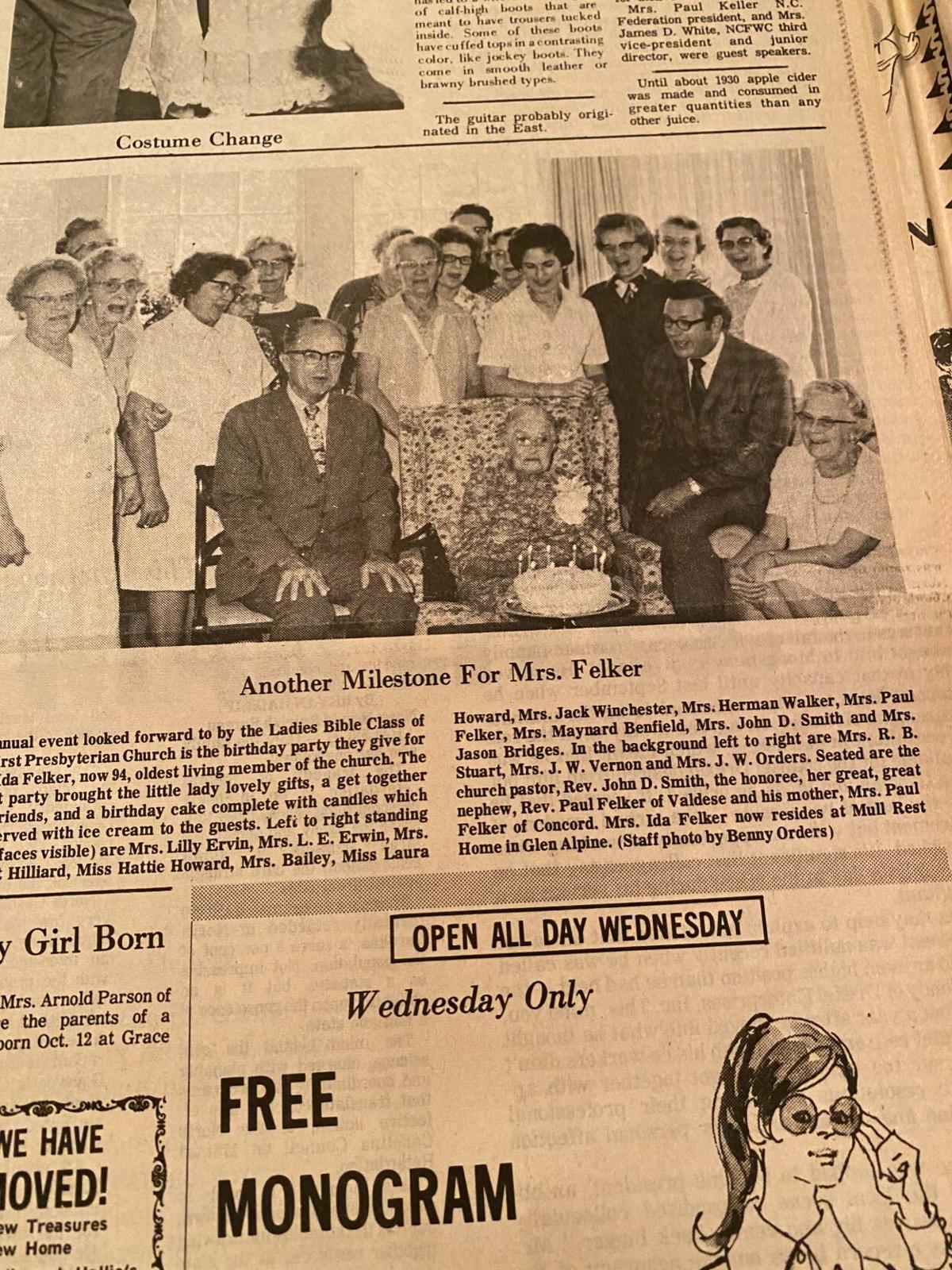 Members of First Presbyterian Church of Morganton held a birthday party for Ida Felker, 94, the oldest member of the church, 50 years ago.

Assigned to school: Airman Richard J. Franklin, son of Mr. and Mrs. Lloyd V. Franklin of Morganton, has completed basic training at Lackland Air Force Base in Texas. He has been assigned to Kessler Air Force Base in Mississippi for training in the administrative field. Airman Franklin is a 1968 graduate of Josephs Military Academy in Hays, Kansas, and received his associate degree in 1970 from Western Piedmont Community College.

Promoted: Joseph F. Long was promoted to private first class in the Marines on Friday at the Memphis Air Station. It was a meritorious promotion for being number six in his class. He entered the Marines on May 13, finished boot camp at Parris Island in South Carolina on July 20 and completed advanced training at Camp Lejune in North Carolina on Sept. 10. He is the son of Mr. and Mrs. J. W. Long of Greenbriar Lane.

In signal school: Pvt. Robert Lambert, son of Mr. and Mrs. Jack Lambert of Drexel, is in his fourth week of communications training at Fort Gordon, Georgia. Lambert graduated from Drexel High School in 1968 and entered service last July 9. His course lasts for 16 weeks. He worked at Valdese Printing before his enlistment.

Burand L. McGinnis was honored for his long service to South Mountain Institute at the annual meeting of the institute’s board of trustees Tuesday Night in the SMI Library.

McGinnis has been a member of the board since 1945 and served as president for 23 years until he was succeeded by Tux Bowers about a year ago.

After tribute was made to McGinnis, a tribute was made by Maurice Hill, another member of the board. A large photograph of McGinnis that will hang in the library at South Mountain was unveiled.

W.J. Gamble Jr. and James B. Cates will serve as co-chairmen of the public division of the Burke County United Fund campaign, which will kick off Oct. 19, according to Billy Jo Patton, the chairman of the fund.

Gamble is the business manager at Broughton Hospital. He is a member of the Morganton Kiwanis Club and the Mimosa Hila Country Club.

Cates is a business instructor at Western Piedmont Community College.

The annual membership banquet of the Burke County Chamber of Commerce has been set for Dec 8 at 7 p.m. at the Morganton Moose Lodge.

The chamber’s board of directors made plans for the banquet at a luncheon meeting at the Morganton Community House.

New officers and members will be installed at the banquet.

J.D. Fitz, president of the Chamber of Commerce, presided. Reports were heard by several committees.

H.L. McCulay, chairman of the fire prevention committee, reported that members of his committee and Morganton fire Chief Carroll Sullivan went to 11 elementary schools in the county to make cash awards to winners in the fire safety contest sponsored by the committee and the Morganton Fire Department.

Andrew M. Kistler II, a local insurance man who has been active in local and church affairs, today was elected as president of the Burke County Chamber of Commerce.

He was named by the board of directors to serve in 1971 as successor to J.D. Fitz, current president.

The action came at a luncheon session held by the board with standing committee chairmen at the Community House.

Sgt. Lloyd K. Smith, son of Mrs. Blanche B. Carlton of Route 1, Valdese, received the Bronze Star from Maj. Gen. William G. Moore at Travis Air Force Base in California. Smith distinguished himself as a transportation superintendent with the 14th Aerial Port Squadron at Cam Ranh Bay Air Base in Vietnam.

A recent column in The News Herald theorized we may return to a version of early 20th century farm life due to the coronavirus pandemic, such …

New rural routes to be established

A recent column in The News Herald theorized we may return to a version of early 20th century farm life due to the coronavirus pandemic, such …

Members of First Presbyterian Church of Morganton held a birthday party for Ida Felker, 94, the oldest member of the church, 50 years ago.