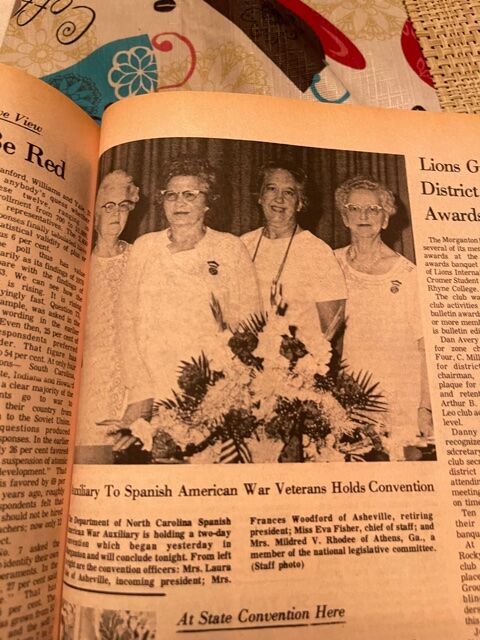 Members of the North Carolina Spanish-American War Auxiliary held a two-day convention in Morganton 50 years ago. 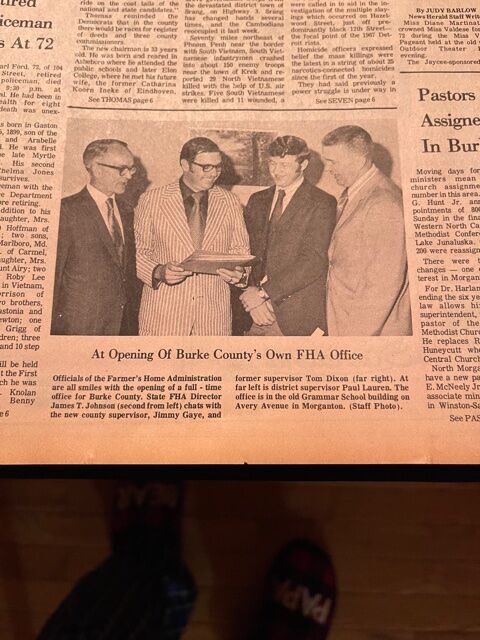 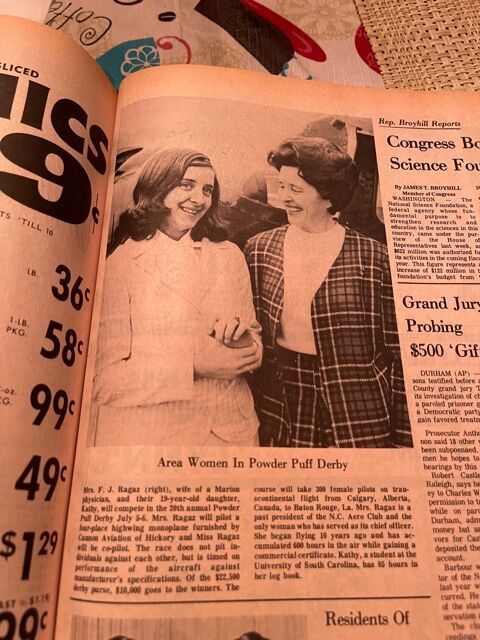 Mother and daughter pilots Mrs. F.J. Ragaz, right, and Kathy Ragaz of Marion flew a monoplane in a transcontinental flight from Alberta, Canada to Baton Rouge, Louisiana for the Powder Puff Derby 50 years ago.

Willian Joe Patton, 22, of 511 Riverside Drive, was charged with driving too fast for conditions by Patrolman Steve Compton following a one-car accident on U.S. 70 west of Glen Alpine.

Patton and two other companions were returning from Lake James when Patton lost control of his vehicle on wet pavement, plunged down an embankment and struck a tree.

Patton suffered a broken left leg in the crash. His condition was listed as satisfactory at Grace Hospital this morning.

John Collett Jr., 14, of 111 Woodbine Terrace, sustained cuts and lacerations in the crash. He was listed in satisfactory condition.

Joseph Bryan Diercks, 20, of 226 W. Park Drive, sustained a broken back in the crash, along with cuts and lacerations. He was listed in satisfactory condition at the hospital this morning.

New officers for the Morganton, Burke County Merchants Association will be installed at a continental breakfast at the Community House on June 24.

Robert Lee Kirksey of Giles Motors Inc. will be next year’s president. He replaces Durward E. Colark of Wachovia.

The 1971 Western Carolina Swim Association is only a week old, but the regular season championship could be at stake tonight.

Defending conference champion Hickory and perennial power Morganton face off in a dual meet at Hickory tonight, and the winner will immediately take on the favorite’s mantle for the rest of the season.

Both teams won their opening meets of the season a week ago.

Hickory, under a new coach this season, has a strong collection of individual swimmers, as does the Morganton team. The real test could be in the degree of depth on the two age group teams.

The meet begins at 7 p.m. with individual medley races for the older age groups. Hickory has a strong 9-10 girls’ contingent, led by Lisa and Terry Troutman.

Morganton’s strongest age groups are the 8-years-old and under boys, led by Danny and Bubba Hamer; the 9-10-year-old boys led by Joe Royall and Russel Lookadoo; the 13-14-year-old girls, led by a half dozen key swimmers; and the 15-17-year-old boys.

Directors voted its general approval after discussing the pending request for extended area service, which would eliminate toll charges between the Hildebran exchange of Central Telephone Company and the Central exchange at Valdese and the Southern Bell exchange in the Morganton area.

C. Miller Sigmon, chair of the civic affairs committee, said county commissioners and the Burke County Board of Education have joined in a request for extended area service that would make toll-free any calls within Burke County. At present, calls in and out of the Hildebran area are classified as toll or long-distance calls. Morganton and Valdese are already linked with toll-free service.

The newly organized chapter was sponsored by the Hildebrand Jaycees, who were guests at the meeting also.

Ray Weaver, president of the Hildebrand chapter, spoke to the group and extended chapter representation.

A brick-and-block building has been built on Wilson Drive. This drive is just inside the city limits off of U.S. 64. The building is owned by L.C. Cook and is really nice. The front part of the building will be used as a beauty salon, while the back part of the structure will be used as an antiques shop with a full line of antiques on display. Wilson Drive is not to be confused with Wilson Street.

Morganton is blessed with modern apartment houses. And we wish we had more. We could use them.

Yes, we have no bananas, but we have many plants and home sites left. No city or town can have too many plants. The more industry we have, the more we will yell, “Morganton will grow whether we like it or not.”

Retrospect: Do you remember when the Village Improvement Society hired a man to push a cart around town and collect trash on the sidewalks and dirt streets? And when Michael Kistler was the bookkeeper at the Morganton Tannery? Whatever became of that row of small houses below the depot? Oh yes, sure — they were removed to make room for the underpass bridge. Did you know that the first Oak Forest Church was beyond the State Hospital (now Broughton)?

Thousands demonstrate in Madrid to call out violence against women

Thousands demonstrate in Madrid to call out violence against women

Members of the North Carolina Spanish-American War Auxiliary held a two-day convention in Morganton 50 years ago.

Mother and daughter pilots Mrs. F.J. Ragaz, right, and Kathy Ragaz of Marion flew a monoplane in a transcontinental flight from Alberta, Canada to Baton Rouge, Louisiana for the Powder Puff Derby 50 years ago.