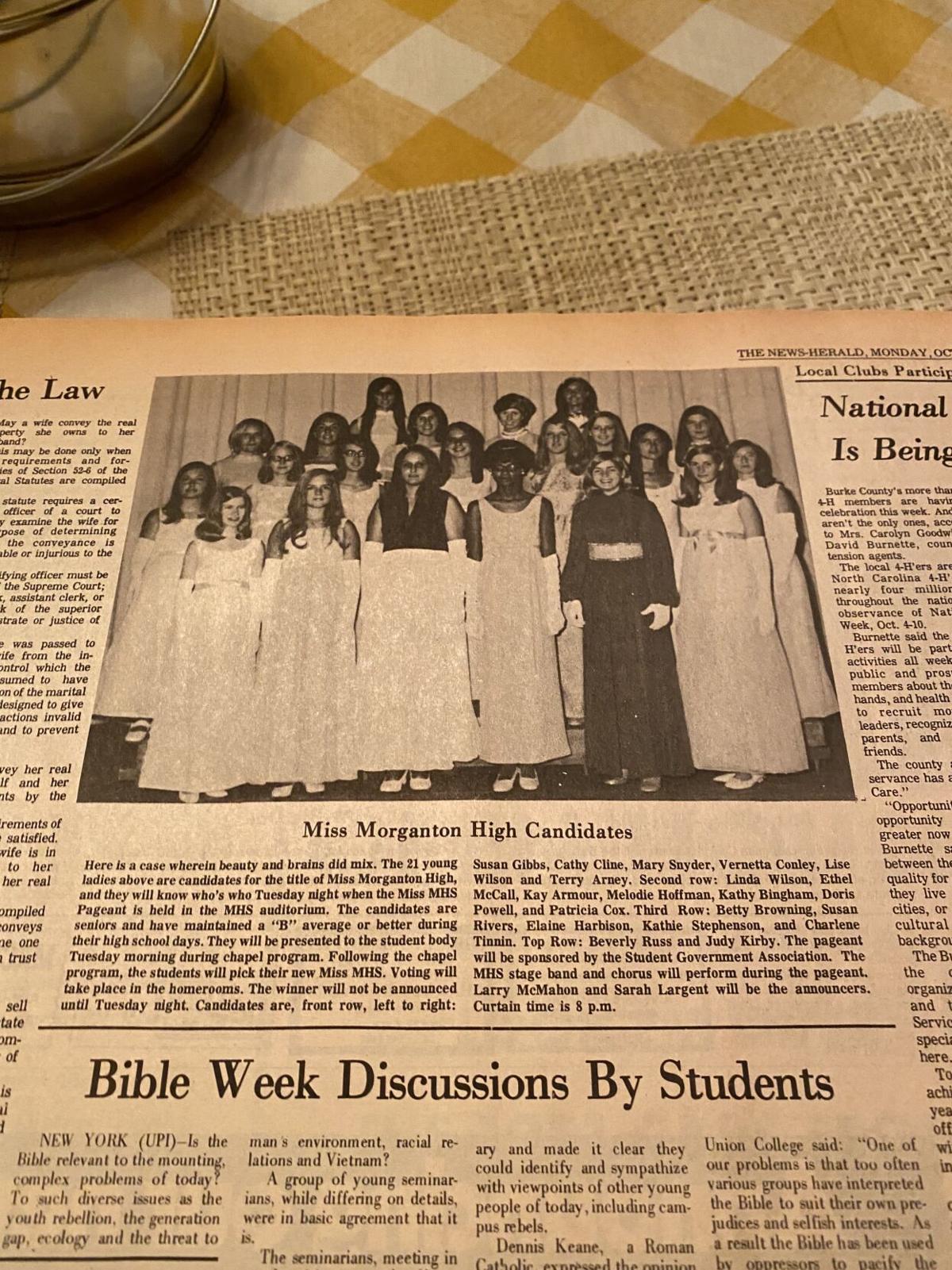 Pictured are candidates for the Miss Morganton High School pageant 50 years ago. 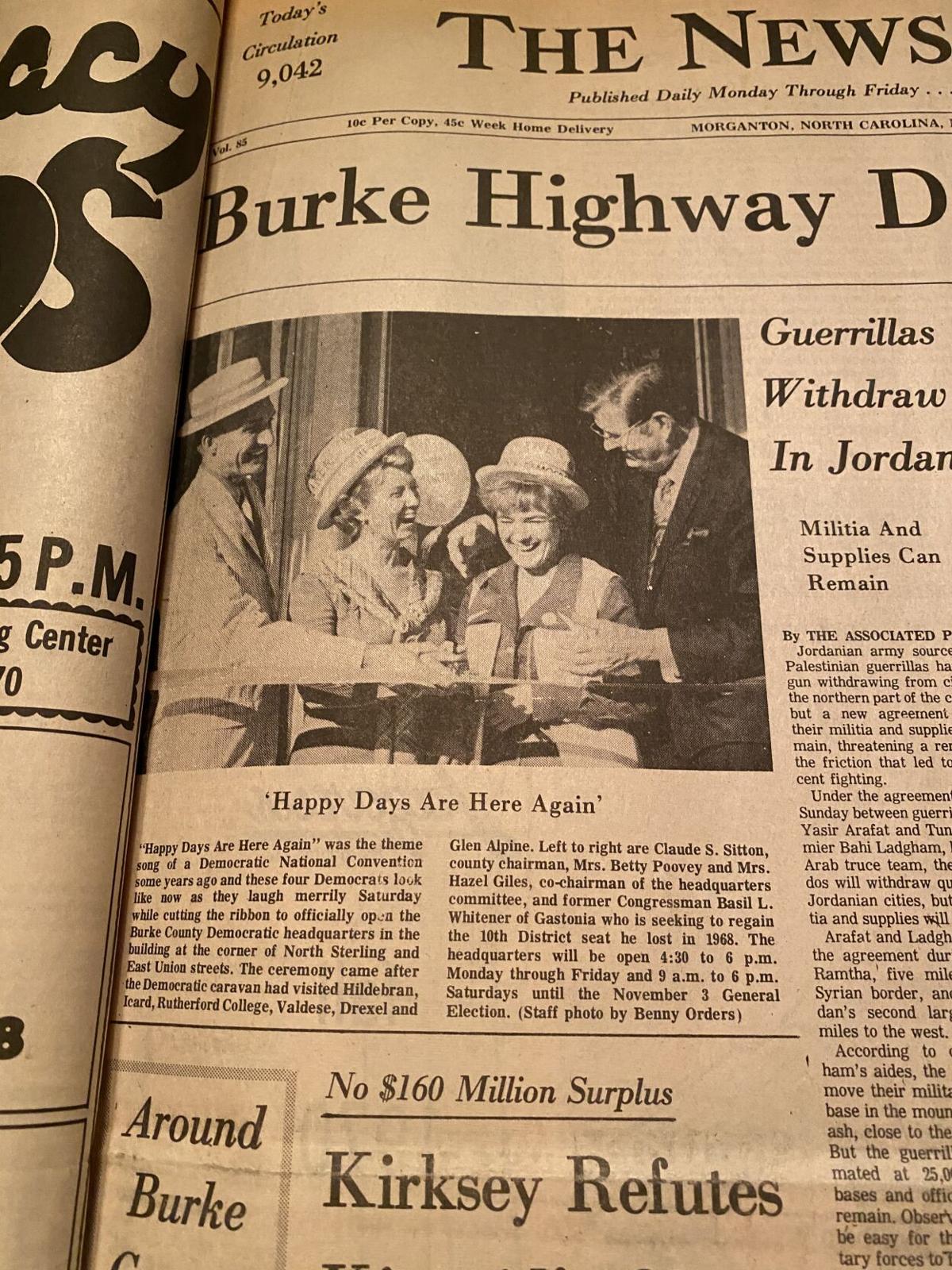 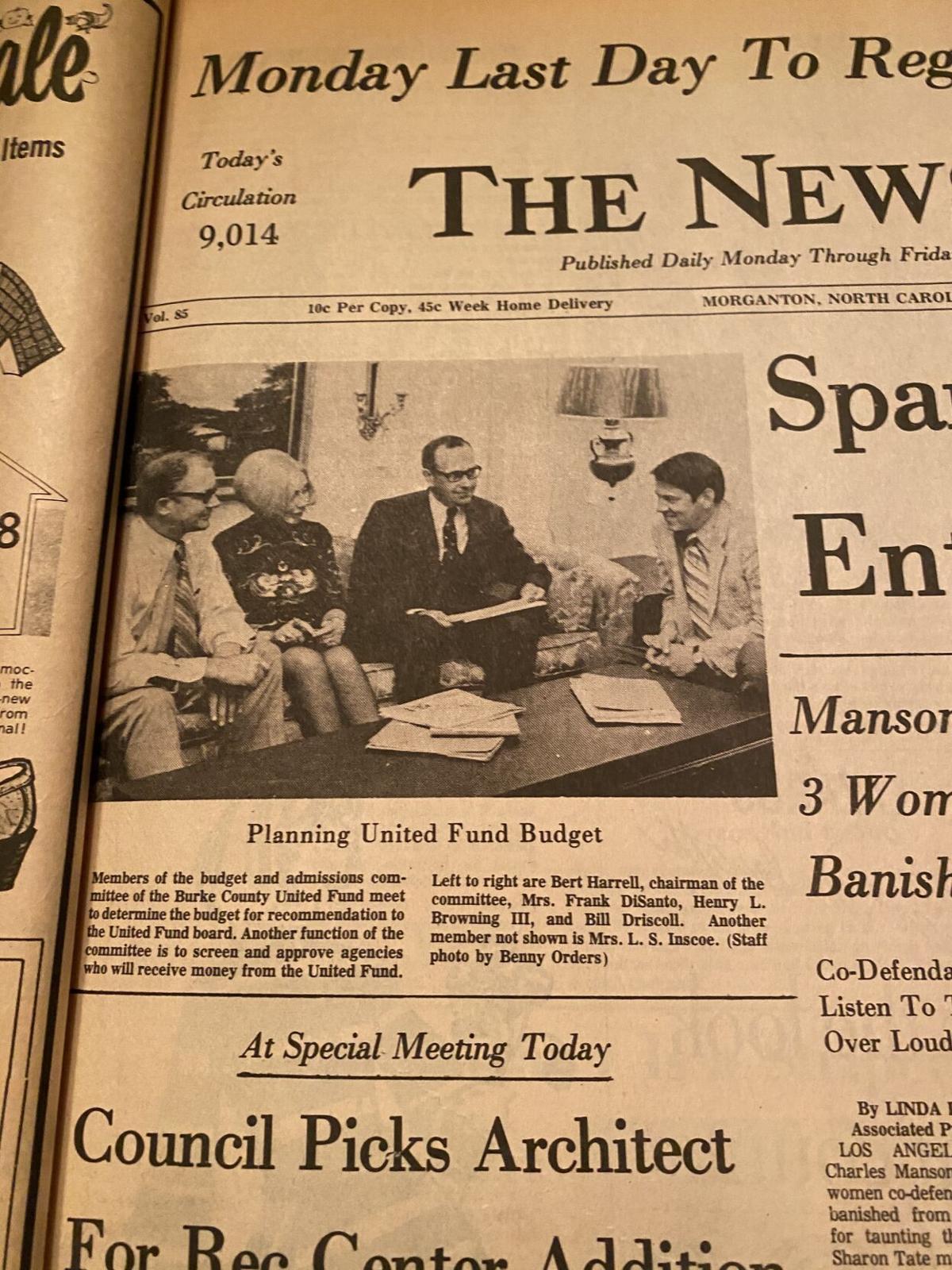 Members of the budget and admissions committee of the Burke County United Fund held a meeting 50 years ago. 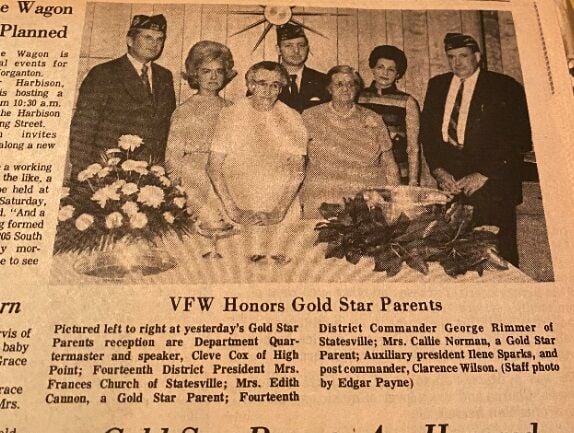 School day at the Burke County Fair ended with some happy youngsters Saturday. Bicycle winners were Jeff Pendley, third-grade student and son of Mr. and Mrs. Lee Pendley of Nebo, and Renee Kirk, sixth-grader at Hillcrest and daughter of Mrs. Patricia Kirk of Morganton. Football winners were Tim Clark, ninth-grade student and son of Mrs. Ronald Clark of Newland, and Shelia Cloud of Drexel, daughter of Mr. and Mrs. Joel Cloud of Drexel. Also present at the drawing was James Clontz, 2, son of Mr. and Mrs. T.N. Clontz Jr. of Route 7, Morganton, who did the drawing.

TEACHING IN OUR SCHOOLS

Phyllis Ann Garrison, daughter of Mr. and Mrs. Marvin W. Garrison of Drexel, is currently doing student teaching at Valdese High School. Garrison is a senior at Appalachian State University and a 1967 graduate of Drexel High School. She is teaching advanced English under the supervision of Donald McCall and ninth-grade English under the supervision of Myra Braswell. At ASU, Garrison is an active member of the school newspaper staff, literary association, Baptist Student Union, and University Chorus. She will receive her Bachelor of Science in Education in May 1971.

KIRKSEY’S SERVICE TO THE COMMUNITY

The Kirksey family began its long record of service to Burke County residents when W. Kirksey moved from Brendleton to Morganton in 1905 and opened Kirksey and Company, a retail furniture and hardware store. For several years, the store sold hardware to people making their own caskets.

He founded Kirksey Funeral Home in 1908. By this time, casket manufacturing had come into being, and the funeral home sold caskets and directed funerals. W. Kirksey was aided in the funeral business by two sons, E.A. and Grover Kirksey, as well as Oliver Webb, McDowell Estes and Rhoney R. Taylor. Taylor joined the firm in 1925.

By this time, E.A. Kirksey was manager of the company, assisted by his younger brother, L.H. Kirksey Sr. He remained as president of the company until his death in 1966.

The new Kirksey Memorial Chapel is being dedicated Sunday in memory of E.A. Kirksey and L.H. Kirksey Sr., who served as vice-president until his death in 1965.

Local store owner Dixie Faulkner told Sheriff Alvin Wise that she was hit in the mouth and robbed of more than $100 in cash Saturday night as her daughter, Mrs. Herman Ollis, wiped blood from her mouth. The store, located on Hwy 126, was entered by a strange man at about sundown Saturday. When Faulkner, in her 80s, went to help the man, she felt a blow to her face and passed out. A neighbor discovered her lying on the floor and called relatives. An investigation is continuing.

The Burke County Fair is drawing record crowds this week, and this may be a matter of people wondering if the Charlotte Skydivers will survive the week.

First, a diver broke his leg and then another diver’s chute failed to open, and he just barely got his auxiliary chute open in time to break his fall into a tree just north of the fairgrounds. Last night, all went as planned. Two landed off of target, one in a cemetery.

Tonight at 8 p.m., the big attraction will be the Mimosa Squares, a local dance group. Bill Bryan of Asheville will be the caller. And Saturday night at 6:30 p.m., there will be a special act - an extra performance of the Skydivers.

PLAYING AT THE MIMOSA

Monday and Tuesday: “The Student Nurses” - They’re learning fast. Restricted - Persons under the age of 17 must have accompanying parent. $1.25

Furnifold in the Snow, circa 1945 – Margaret Caroline Hamilton and Cecil Dane Hamilton Jr. playing in the snow. The house was located at 308 T…

Pictured are candidates for the Miss Morganton High School pageant 50 years ago.

Members of the budget and admissions committee of the Burke County United Fund held a meeting 50 years ago.