During past decades, the National Forest Service and partner agencies have documented dozens of ancient Native American rock art, petroglyphs (rock carvings) and pictographs (rock paintings) throughout the mountains of western North Carolina, according to local historian and author Larry Clark. Its goal is to record and conserve this ancient record of Native Americans who first settled here thousands of years ago.

Some time ago, archaeologist Scott Ashcraft searched portions of Burke County while hearing rumors about potential finds and has documented six rock art sites in the county so far, including historic examples. His search has been renewed by Caroline Boerger, an intern with the National Forest Service and student archaeologist at Appalachian State University.

Clark said Boerger investigated old reports while hoping to hear about new leads from Burke County residents. One promising lead is listed as being located on “Lettered Rock Ridge” east of Hawksbill Mountain near the Linville Gorge area. Although described in early 20th century written accounts, this site is not mentioned after the 1930s. While this “art,” scratched or painted onto stone, may have been removed, Boerger is eager to talk with anyone who has a related story or photograph or may suggest looking for more rock art in this area of Burke County.

Another location of historic interest is a Burke County mountain named “Old Way Ridge," located between Upper Creek and Chestnut Mountain. The Forest Service is interested in gathering information about its namesake and settlement from local residents and families.

“Perhaps this ‘Old Way’ was an early Native American trail which, centuries later, was followed by the earliest European settlers into Burke County,” Clark said. “Hopefully, this notice will jog your memory of a photograph, story, or tale about rock art in Burke County or, perhaps, encourage you to ask older residents if they know of any similar examples. If you have a story to tell that may help Caroline in her research, please call The History Museum of Burke County (828-437-1777) and leave your name and telephone number.”

The story of the Hmong people through Tea Yang

Local resident Tea Yang shares the story of the resilience of the Hmong people: 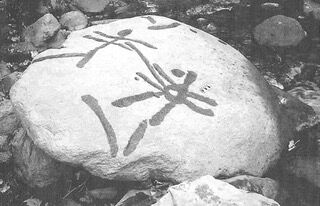 An example of rock art from McDowell County, a petroglyph, with highlighted markings to reveal the Native design scratched into stone. Pictograph designs are painted onto stone. 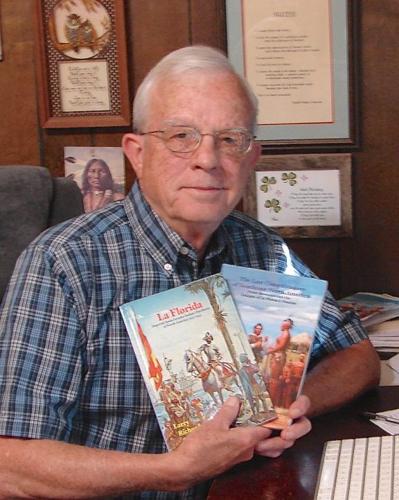 Larry Clark is pictured with some of the books he has written on local history.