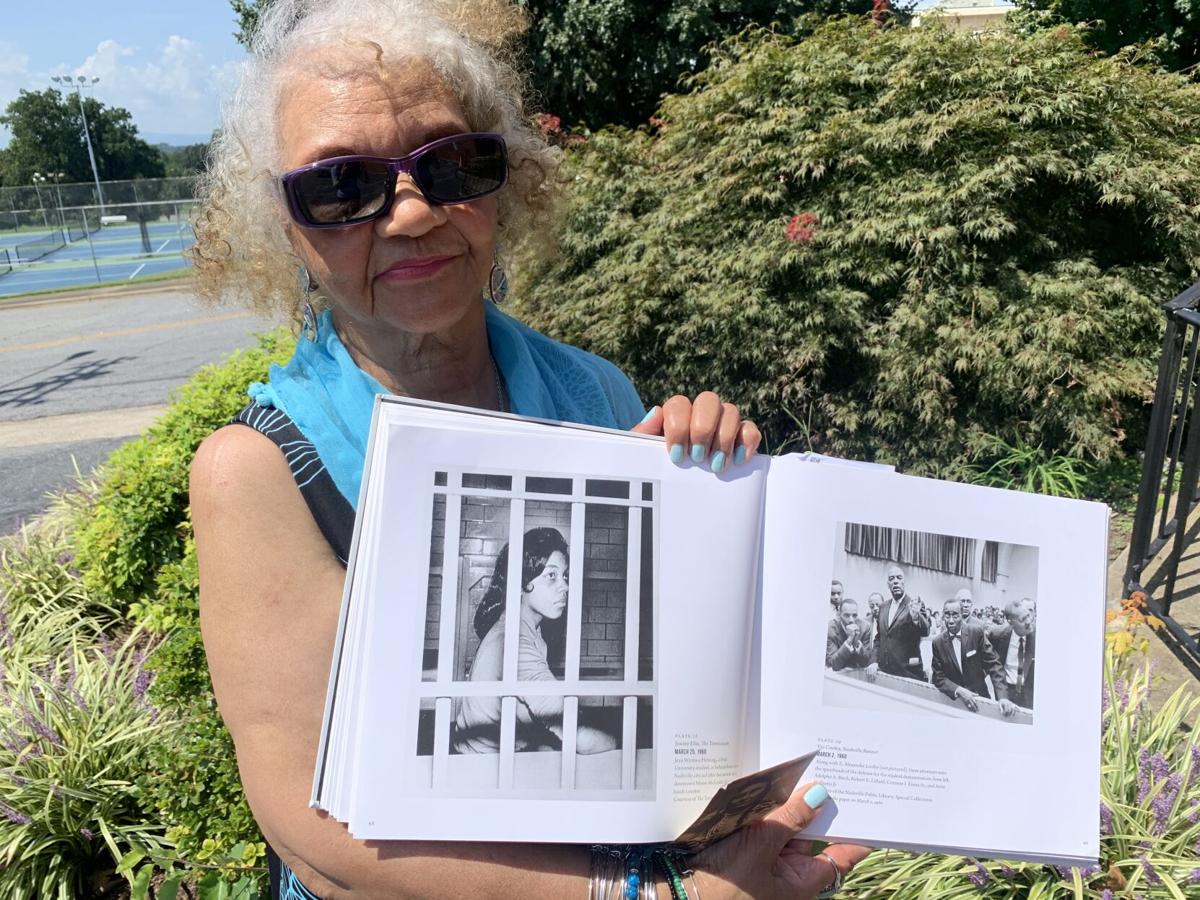 Local resident Jean Fleming shows a picture of herself in a jail cell that was taken following a sit-in demonstration in which she participated in 1960 in Nashville, Tennessee. The photo was published in the book, “We Shall Overcome: Press Photographs of Nashville During the Civil Rights Era,” edited by Kathyrn E. Delmez.

The late U.S. Rep. John Lewis is pictured participating in a women's rights march on Jan. 21, 2017. Lewis spent much of his life fighting for equality for African-Americans and other minority groups.

Watching the funeral of the late U.S. Rep. John Lewis in July brought back memories for local resident Jean Fleming.

Fleming, 80, participated in civil rights sit-in demonstrations with Lewis in 1960 in Nashville, Tennessee. In addition to serving in Congress from 1986 to 2020, Lewis, a prominent civil rights leader, was chair of the Student Nonviolent Coordinating Committee from 1963-66 and an organizer of the 1963 march on Washington and one of the Selma to Montgomery marches, according to his biography. He was attacked and injured many times while fighting for racial equality.

“Even though John and I grew up in different circumstances, we shared growing up in a segregated society,” Fleming said. “He was in Troy, Alabama, and his father was a sharecropper. He said his parents always told him, ‘Don’t get in the way. Don’t cause any trouble.” His mantra all of his life has been, ‘No, speak up – get into trouble – good trouble.’ That kind of links our reality.”

“My parents never shielded me from the segregated status of everything,” Fleming said. “They were very outspoken. My mother did a Rosa Parks on the train one time. I attended segregated schools. When we got our books, they would have four or five names in there, so we knew they had been discarded from the white school. You were always waited on last (in restaurants). Even if other people came in after you, you still had to stand there and wait, and there were no restrooms you could use if you went downtown to shop.”

She said the Emmett Till murder in 1955 motivated many younger African Americans to take up the cause of civil rights. Till was a 14-year-old boy of color from Chicago accused of inappropriately flirting with the wife of a white grocery store owner while visiting relatives in Mississippi. The clerk’s husband and other family members abducted Till, brutally beat him, shot him in the head and threw his body in a river, where he was found three days later. The perpetrators were arrested for the murder, but acquitted, though they later publicly confessed to it. Years later, the woman who made the accusation confessed that she fabricated part of her testimony regarding Till.

“Things like that happened all the time, but the reason that got so much attention is because he was from Chicago, and his mother allowed them to put a picture of his mutilated body on the cover of Jet magazine [Note: Research indicates that the photo did not appear on the actual cover of the magazine, but was included in an article published about the murder in the magazine.] That went everywhere. I was about 15 at the time, and so was John, so that was something that was traumatic. When John saw that, he wrote to Dr. Martin Luther King. Martin Luther King was impressed with him and sent him a ticket to come to Atlanta and visit his church. He teasingly called him ‘the boy from Troy.’”

Fleming was a junior at Fisk University studying sociology when Black college students in southern towns began sitting down at white-only lunch counters to stand up for their civil rights.

“It started in Greensboro, early in 1960,” Fleming said. “When the sit-ins were happening, it was the Baptist seminary (American Baptist Theological Seminary in Nashville, Tennessee, where Lewis attended), Fisk, and Tennessee State – at that time, it was called Tennesee A&I (Agricultural and Industrial State College). We met at sit-in meetings.”

Even then, Lewis showed characteristics of a leader.

“He was a calm person, but very resolute,” Fleming said. “He was quiet – he didn’t talk a lot. But whatever we were doing, he was going to be at the beginning. He wasn’t going to push you to do something that he wasn’t going to follow up and help and be a part of. He always was in front, leading. You got strength from him.”

They received training to mentally prepare for the verbal abuse and physical attacks they would have to endure during demonstrations. She said the training program was created by the Rev. Dr. James Lawson, a professor, minister and civil rights activist who learned non-violent protest techniques while serving as a missionary in India.

She described what it was like to participate in the real thing.

“It was hard to watch other people get hurt,” Fleming said. “People were yanked off stools and beaten. The worst thing that happened to me was (that I had) a drink poured on me, on my new coat. And they would blow smoke in your face. The training helped you to stay calm. You had to stay centered, keep your eyes on the prize and think of what you were trying to accomplish.”

Fleming and other demonstrators were arrested during one sit-in. They were actually trying to keep things non-confrontational that day, because leaders in their group had entered into negotiations with local store owners.

“I was walking with John and Dennis Foote and two other guys,” Fleming said. “By the time we got in (to the lunch counter), they ran and locked the door. The others outside couldn’t get in, so we went over to the counter and sat. We had made up our minds that if they said, ‘Leave,’ we would have left, because they were trying to negotiate, but they didn’t do that. They just called the police and took us to jail.”

A photo of Fleming sitting inside the jail cell that day is featured in the book, “We Shall Overcome: Press Photographs of Nashville During the Civil Rights Era,” edited by Kathyrn E. Delmez. Lewis wrote the foreword for the book.

“John was very concerned about me,” she said, recalling her arrest. “The guys were in a cell by themselves, and I was in one by myself, and he would call out, ‘Jean, how are you? Are you all right?’”

They had to go to trial following their arrests.

“They let us off,” Fleming said. “I think we were fined $10 apiece. But one of the lawyers’ homes was bombed that night or the next night. It was lots and lots of dynamite, and it really destroyed his home.”

She said the students also organized a boycott of businesses in downtown Nashville through the spring of 1961, which finally motivated restaurants and lunch counters to begin integrating.

Fleming graduated from Fisk and worked at the Burke County Department of Social Services for a few years until she married and became a mother.

“I feel very privileged to have known John Lewis and to have shared some work with him in the Civil Rights Movement,” Fleming said. “I always followed his career, because I was so proud of him. He’d done so well and kept going all the time. He was a loving person.”

She said they had no idea how powerfully their actions would impact the cause of civil rights in America.

“Looking back at that time, we really did not know this was history – that it would be in the history books,” Fleming said. “We were young, and we decided this is what we needed to do.”

She hopes the future will see stories and accomplishments of African Americans take their rightful place at the forefront of society.

“Black history is a part of American history, however, it isn’t incorporated into the fabric of the American story,” Fleming said. “I think that history, after all, if you look at the word, is ‘his-story’ – so we have to continue to tell our story until the day it is actually in the fabric of the American history story. I’m sure John would want everyone to keep their hope alive, keep working and not let anyone destroy our moral obligations to make things better.”

Local resident Jean Fleming shows a picture of herself in a jail cell that was taken following a sit-in demonstration in which she participated in 1960 in Nashville, Tennessee. The photo was published in the book, “We Shall Overcome: Press Photographs of Nashville During the Civil Rights Era,” edited by Kathyrn E. Delmez.

The late U.S. Rep. John Lewis is pictured participating in a women's rights march on Jan. 21, 2017. Lewis spent much of his life fighting for equality for African-Americans and other minority groups.