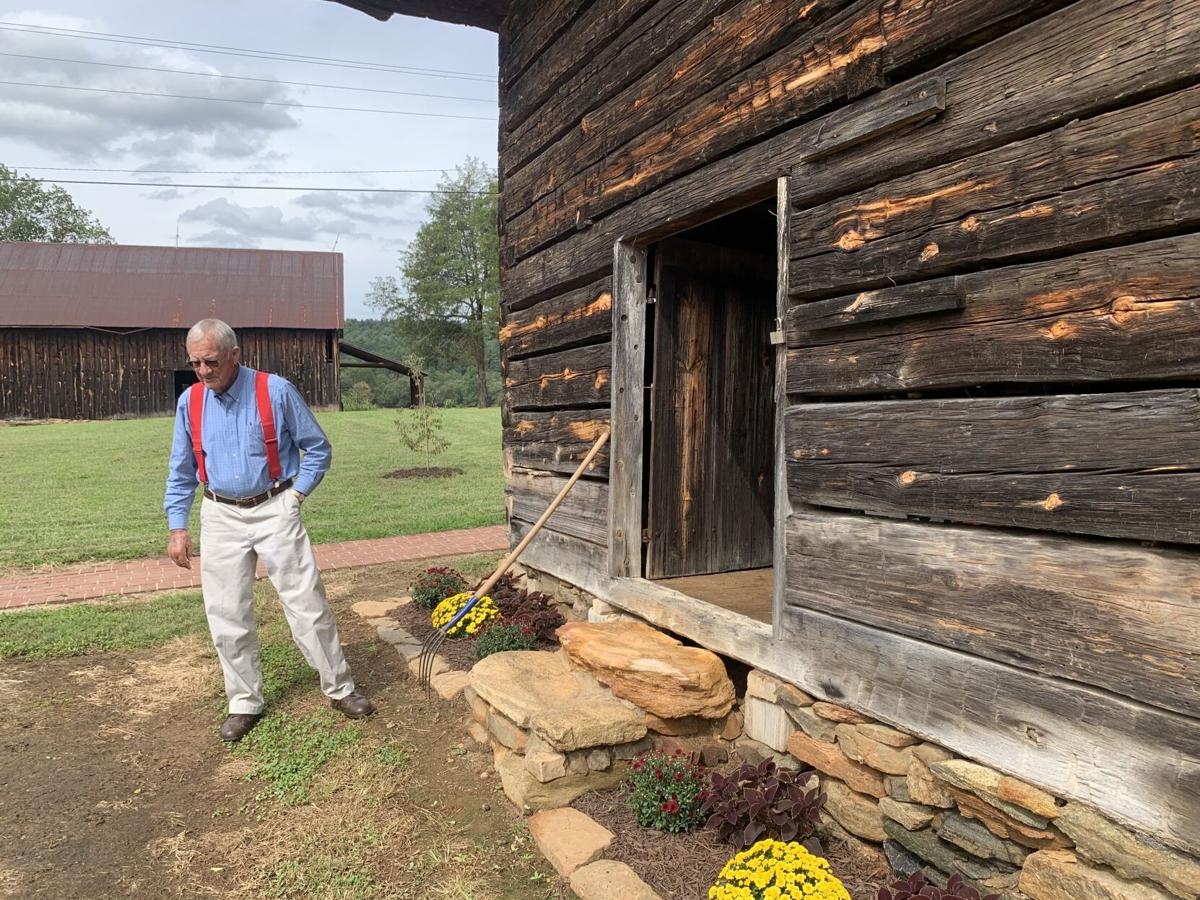 Henry Ramseur stands in front of the smoke house at Cedar Grove, a home his great-great-grandfather, Jacob Forney Jr., built in 1826. 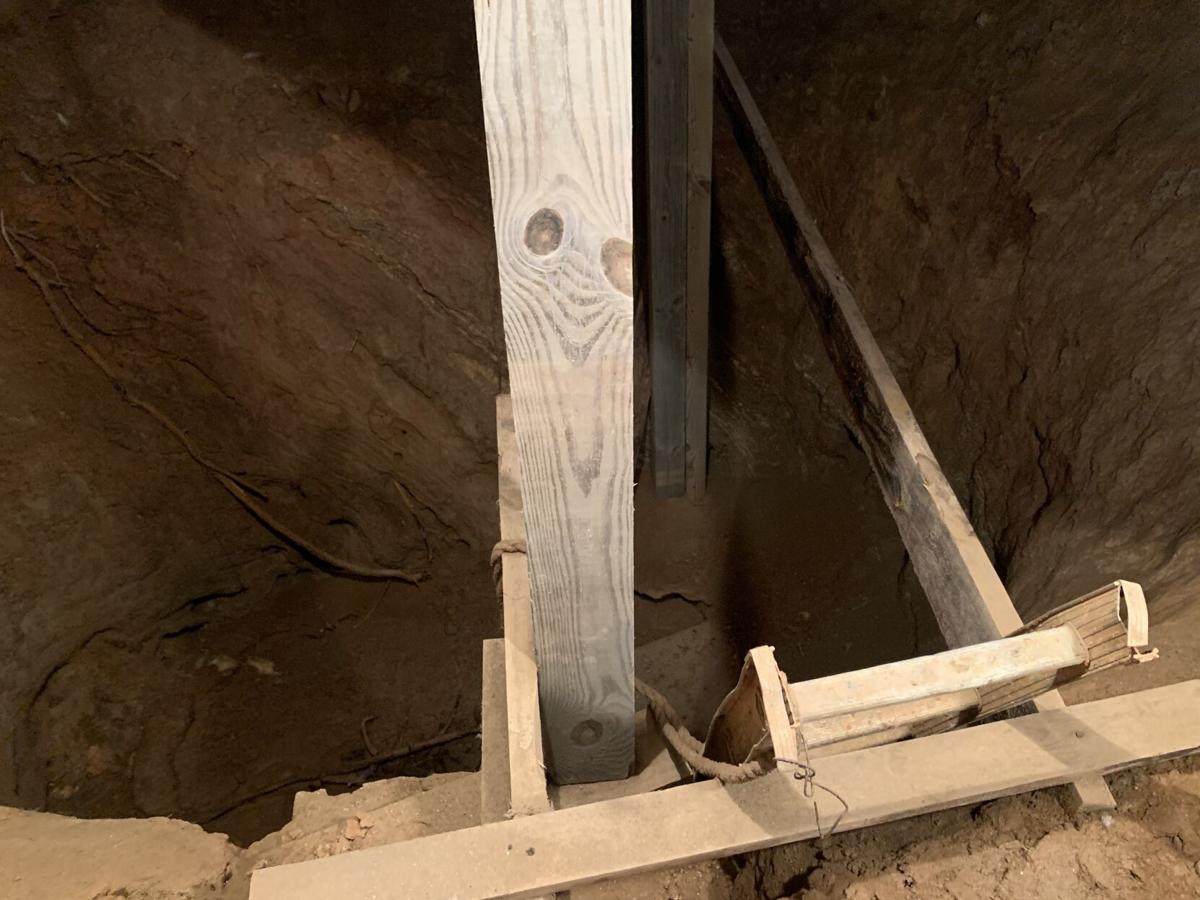 The ice cellar at Cedar Grove once held large blocks of ice cut from a nearby frozen stream in the winter. 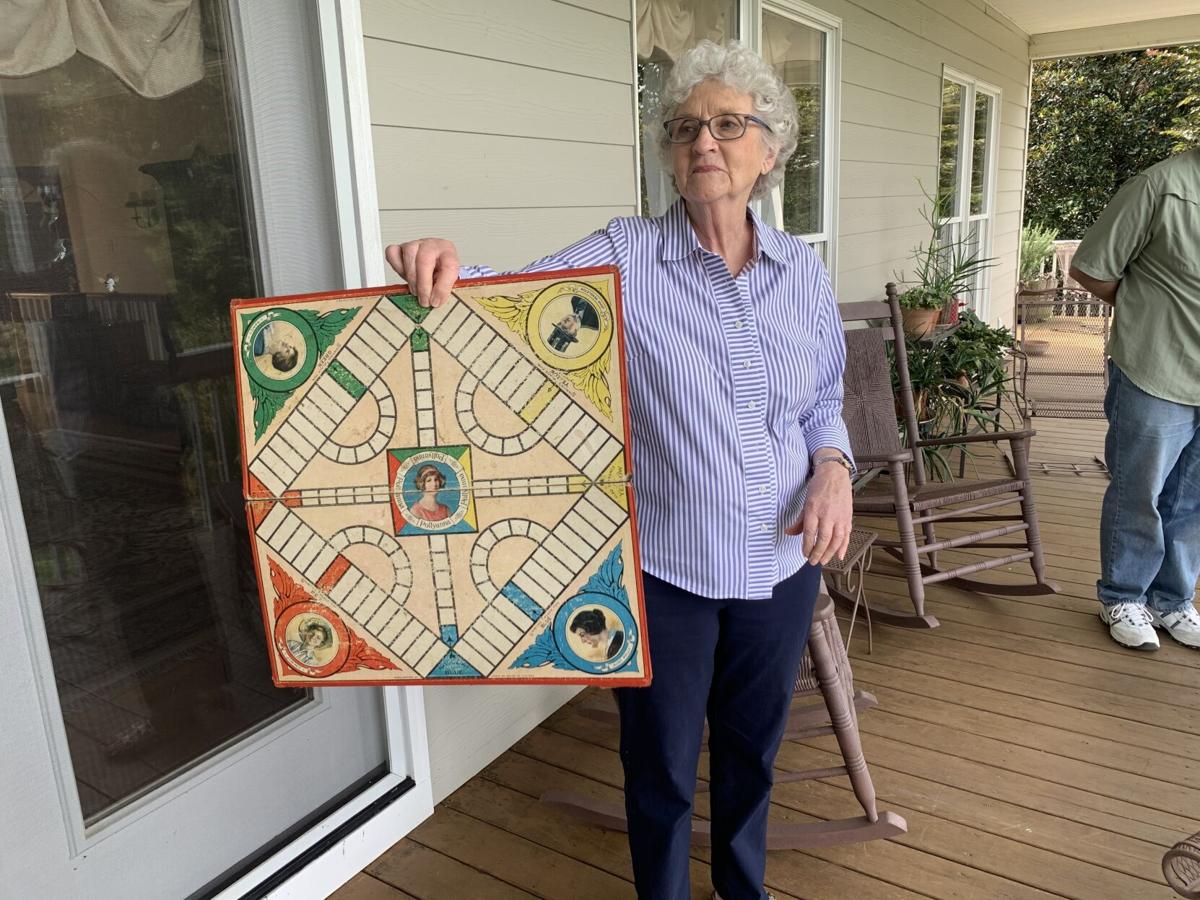 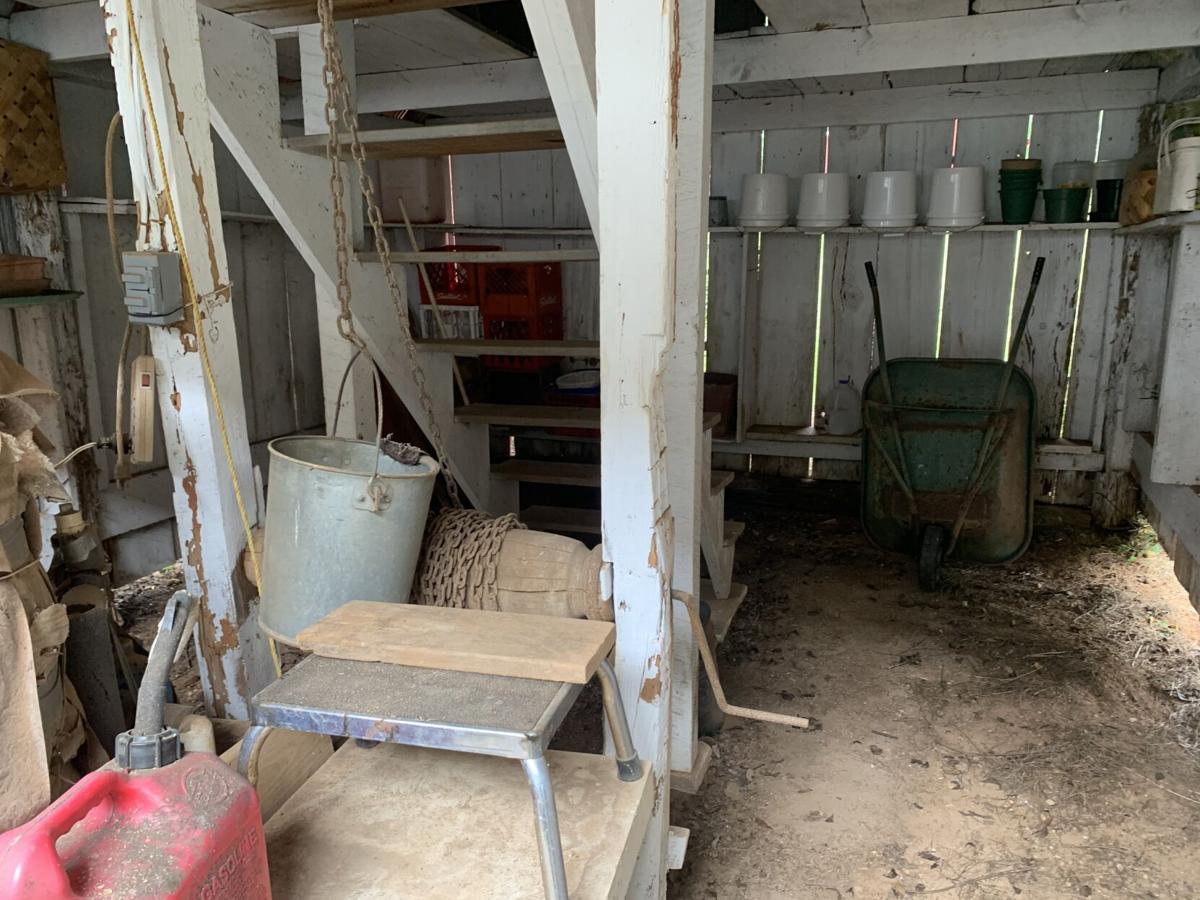 This small enclosure features a well with a hand crank that once served Henry Ramseur's grandmother's farm house.

A recent column in The News Herald theorized we may return to a version of early 20th century farm life due to the coronavirus pandemic, such as working, being educated and entertained at home and growing some of our own food. I grew up in the suburbs of Pittsburgh, Pennsylvania, far from country ways, so the column inspired me to find out what that life was like.

I had just researched the family history of local resident Henry Ramseur and knew his family farmed in the Bost Road area of Morganton going back to the Colonial era, so I asked him what it was like growing up on a farm in the 1930s and ‘40s.

Henry was born in a Duke Power Company tenant house in a community called Lost Corner in Morganton in 1931.

“The doctor came to the house,” Henry said of his birth. “My daddy probably gave him a cured ham for delivering each of us.”

His father, William Forney Ramseur, is the one who named Lost Corner, located along Bost Road, according to Henry’s friend, Roscoe Lingerfelt, whose family also goes way back in the area.

“They were standing there in the muddy, ruddy road, about knee-deep in mud, and my dad said, ‘This is the lost corner of the world,’” Henry said.

Henry lived on the farm with his parents, three older brothers and younger sister. They grew a garden and field crops, such as corn, wheat, soybeans and oats. They raised chickens and cows, and used mules and horses to help with farming. Their home had no electricity or running water until the 1940s.

“I loved to help my father saw wood for the fireplace and the wood-stove with a crosscut saw, a long saw with a handle on each end operated by two people,” Henry said. “My daddy was a pretty good psychologist, in that he would brag to me about how good I was doing, and I’d work like hell trying to impress him.”

He split wood and did other chores for his great aunt for 10 cents an hour at Cedar Grove, the plantation house built by Jacob Forney Jr. in 1826.

“My first glass of iced tea was at my Great Aunt Julia Bost’s home,” Henry said.

With no electricity to run a refrigerator, the family relied on canning fruits and vegetables and smoking or curing meats. Milk went straight from the cow into bottles stored in a stream to keep cool until they got an icebox, a wooden box with a compartment to hold a block of ice used for refrigeration.

When we toured Cedar Grove, Henry and his daughter, Nina Ramseur Warren, who lives there now, showed us the ice cellar, a deep, narrow pit dug into the side of the basement floor going down 15 to 20 feet.

“In my great-grandfather’s and grandfather’s days, the weather was much colder, and the stream froze over,” Henry said. “They would cut ice out of that in the winter months and store it in this ice cellar in either sawdust, shavings or hay.”

They supplemented that by purchasing ice from the ice house in downtown Morganton, located near where city hall stands today.

“One of our cousins made a weekly or bi-weekly trip to Morganton and would buy 25- and 50-pound blocks of ice and bring them to put in the icebox,” Henry said.

They churned their own butter and made cottage cheese.

“My grandmother made an awful lot of cottage cheese, and they had an orchard with several varieties of apples, so a great meal (we had) growing up was cottage cheese and apples,” Henry said.

In the fall, they would cut corn stalks in the field and prepare them for storage.

“After getting home from school, we would help our father load up the corn and stack it in the barn, where we would be feeding it to the horses and cows through the winter months,” Henry said.

The family provided their own entertainment most of the time. They didn’t get a radio until 1940. Henry remembers riding his bicycle to visit his Bost relatives at Cedar Grove to listen to college basketball games on their radio, since his family’s radio wouldn’t pick them up.

They swam in Upper Creek in summer and ice-skated on it in the winter. They also played games. A popular board game at the time was “Pollyanna.” Players rolled dice to advance markers in a pursuit game similar to Parcheesi.

Christmas and Easter were times of celebration.

“At Eastertime, we had rabbits that laid eggs, which is rather strange, you know,” Henry said. “Our three older brothers would lead my sister and me looking for where the Easter rabbit had laid the Easter eggs on Easter morning. Invariably, they would walk right by where the nest was at the edge of a brush pile, but my little sister and I found the eggs. We had bantam hens that laid eggs smaller than normal hen eggs, and my mother would save these and dye them a baby blue, and that’s where the ‘rabbit’ eggs came from.”

The Burke County Guernsey Show in Morganton he attended every year inspired him to work for the North Carolina Cooperative Extension for 24 years, specializing in animal husbandry.

“There were a lot of small dairy farms in Burke County,” Henry said. “The farmers would get together under the leadership of the local county (Extension) agent, and they would block off (where) CVS (is now) with ropes and posts and tie-rings, and the farmers would bring their cattle. It was not a sale — they just showed their animals, from calves to milking cows to herd bulls. It was as exciting to me getting that calf ready and going to Morganton and showing it as the old man coming down the chimney at Christmas. I could hear Mr. Sloane (the Extension director) reading off the name of the farm, the name of the animal and the pedigree, and I thought, ‘Well, he seems like a mighty important person — I think maybe I’d like to be that.’”

He doesn’t believe we will return to an early 20th century farm sensibility during the pandemic, but thinks reviving some of those practices is a good idea.

“People will enjoy their little backyard chicken plot, their garden, their four to five acres — they can become more self-sufficient doing that,” Henry said.

Tammie Gercken is a staff writer and a member of the Morganton Writers’ Group and can be reached at tgercken@morganton.com.

Remembering the flood of 1940

Henry Ramseur remembers the Bost Road area of Morganton flooding in 1940 due to a hurricane that caused excessive rainfall. Living near a creek, the Ramseurs had to briefly evacuate their home to escape the floodwaters.

“Our mother came in and woke us up and said, ‘Children, we’ve got to get out of the house – the water’s still rising,’” Ramseur said. “My father had taken a rug out of the living room and made a shelter on the hillside behind the house. We waded through water out the backyard to our little shelter, where my dad had a fire going. The water got up to the brick foundation of the house and stopped, and shortly after, started receding, and we were able to reenter the house.”

Bost Road was flooded during that time.

“This was a muddy, muddy road,” Ramseur said. “My daddy had horses and kept the harnesses on them, ready to go, because invariably somebody would come by here and get stuck and come wanting him to pull them on through with the horse.”

Take a look back at major news stories from around Burke County from Sept. 20-26, and read more about each story at the links below.

Learning from others' experiences - Favorite stories from 2020

As I looked back on my favorite stories of the year, I realized the common theme among them was people speaking with passion sharing wisdom ga…

Henry Ramseur stands in front of the smoke house at Cedar Grove, a home his great-great-grandfather, Jacob Forney Jr., built in 1826.

The ice cellar at Cedar Grove once held large blocks of ice cut from a nearby frozen stream in the winter.

This small enclosure features a well with a hand crank that once served Henry Ramseur's grandmother's farm house.