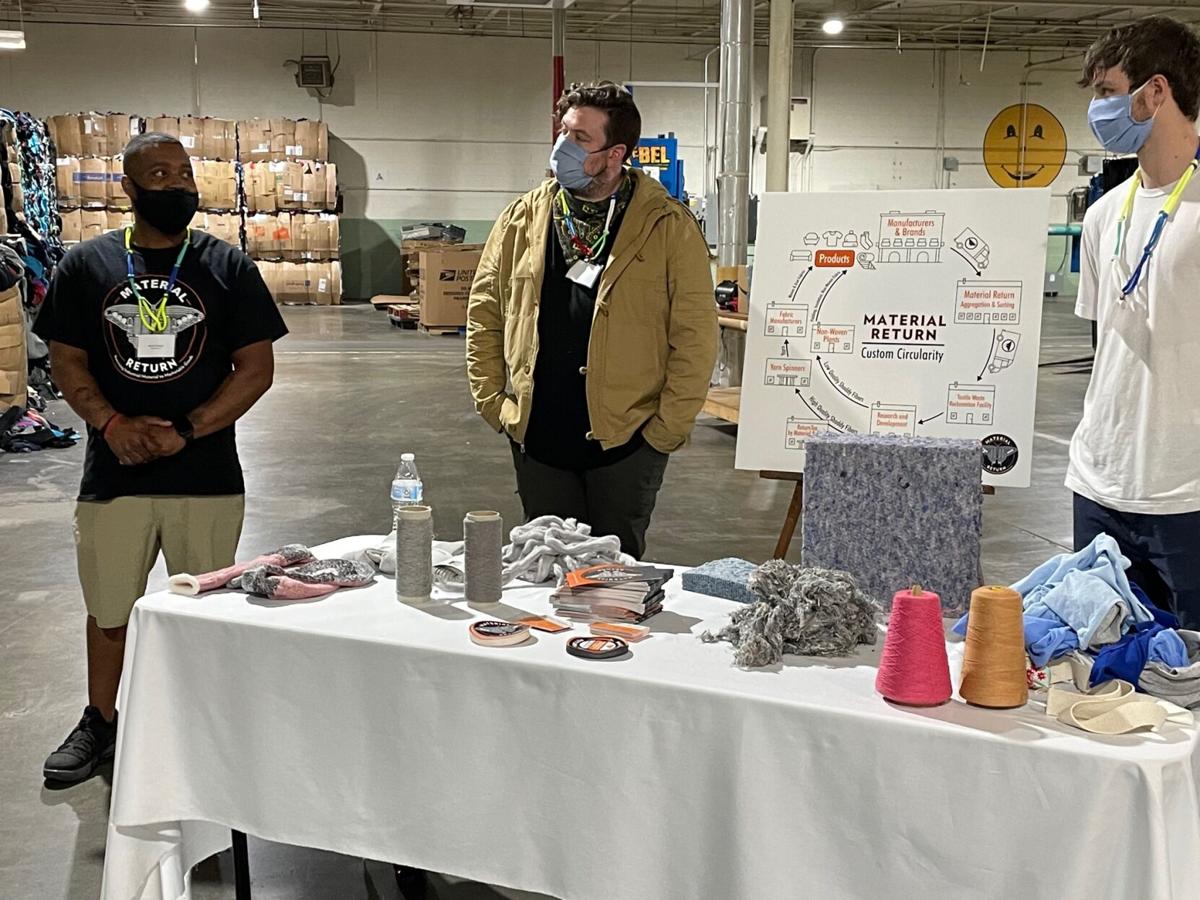 Herron Harper, left, talks about his work at Material Return last week as Bobby Carswell, center, and Patrick McClure listen. The company takes material waste from businesses and turns it back into a product that can be used again. 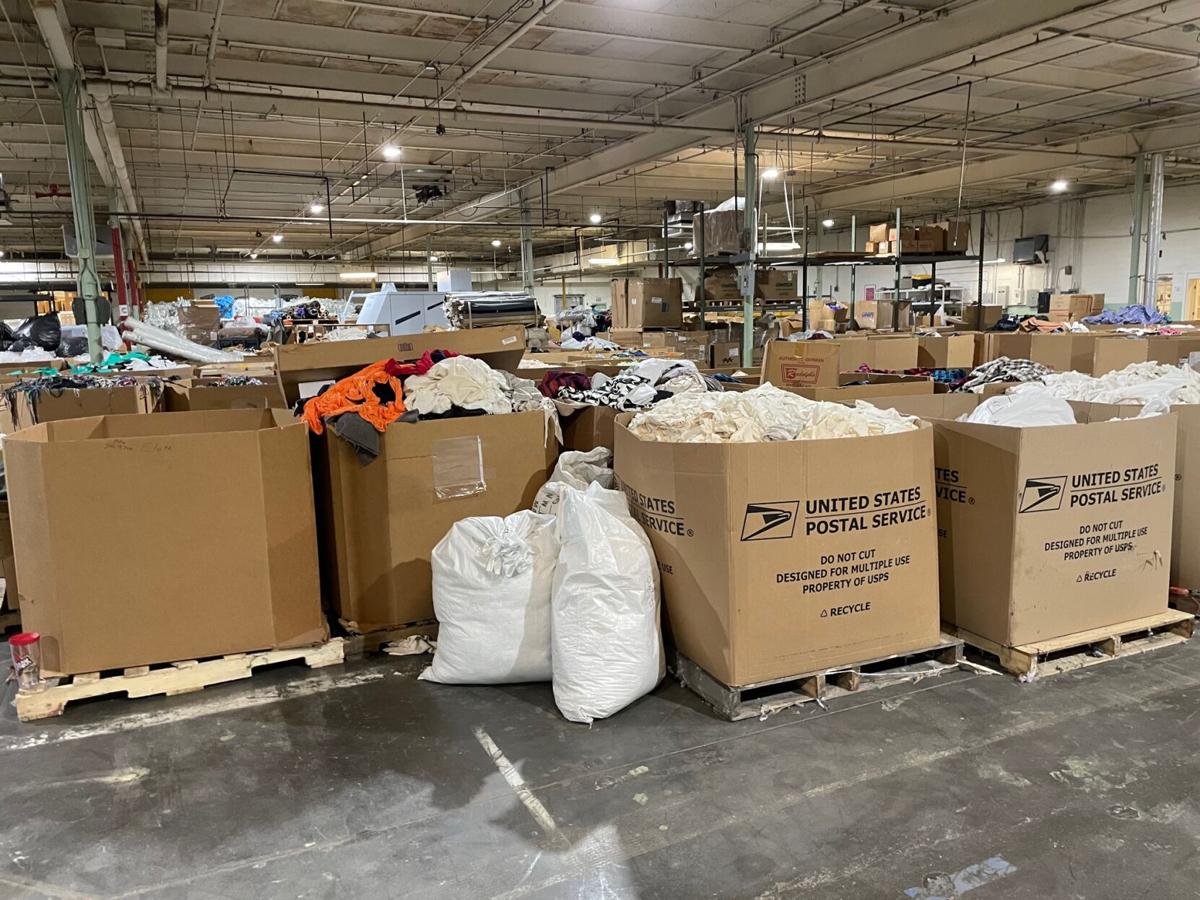 Material Return collects and sorts material waste from businesses and turns it back into a product that will go back into the production stream. 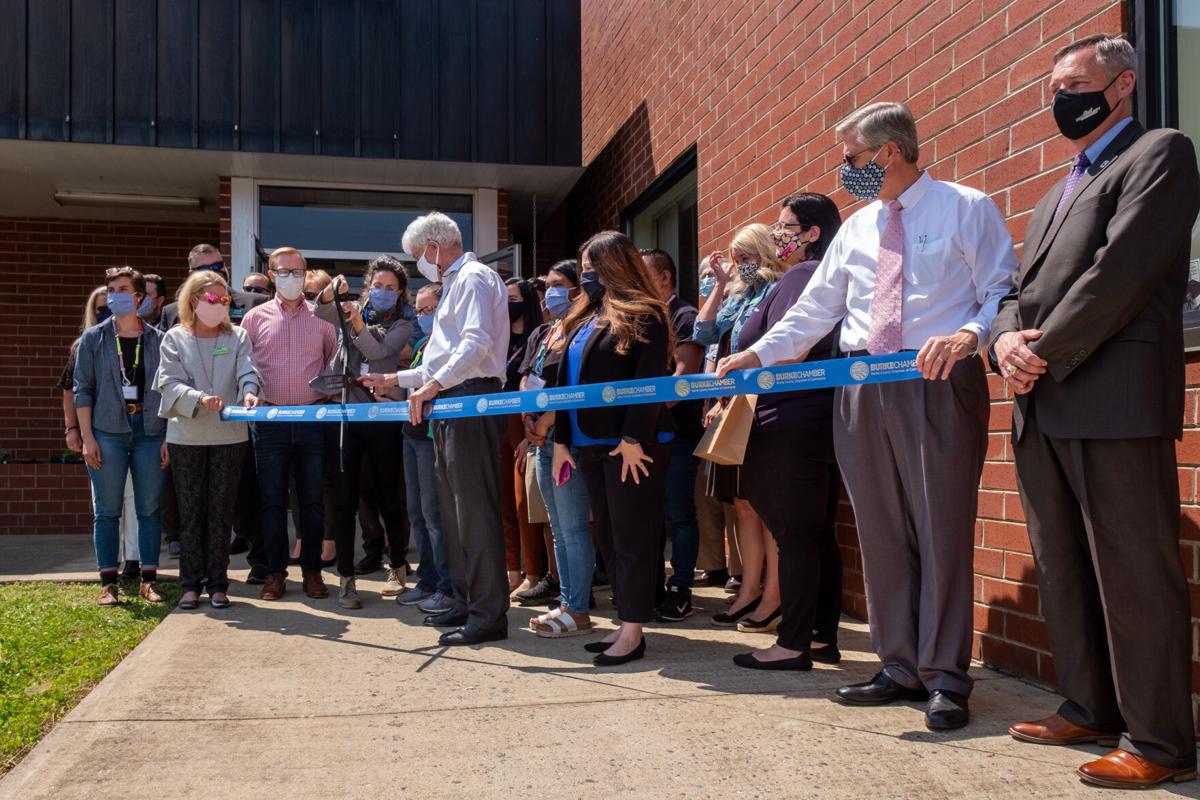 The Industrial Commons held a ribbon-cutting last week at its new home on Hopewell Road. It is in the former Duralee/Carolina Shoe building.

On the heels of receiving a grant from Golden LEAF Foundation, The Industrial Commons and its incubator businesses are growing.

The Industrial Commons held a grand opening in its new location on Hopewell Road last week. They moved into the former DuraLee/Carolina Shoe building.

And one of its incubator businesses is Material Return, which takes waste from furniture and textile companies, turns it into a new material and sends it back to the companies.

That’s called circularity. And the idea is instead of going into a landfill, the material can remain in the companies’ manufacturing process indefinitely, said Sara Chester, co-executive director of The Industrial Commons. She called it the next phase of recycling.

Material Return and Smartwool, makers of Merino wool apparel, recently announced a partnership where the incubator business will take the company’s material and turn it back into a product the company can use again.

Smartwool, based in Colorado, has the goal of reaching 100% circularity by 2030. The company says the textile industry as a whole sends about 11.3 million tons of waste to landfills each year.

In celebration of Earth Day, the company announced last week that North Carolinians can recycle their socks to be made into dog beds at participating retail stores, according to information from the company. In North Carolina, those stores are Great Outdoor Provision Co. in Winston-Salem, Charlotte, Greensboro, Raleigh, Chapel Hill, Greenville and Wilmington or go online at smartwool.com to receive a prepaid postage bag when making a purchase. The socks can be any brand, not just those produced by Smartwool, it said.

The initial donations of socks will be re-purposed into a filling for dog beds, which will be available for purchase at smartwool.com during this year’s holiday season, the company said.

Smartwool said although awareness around the importance of apparel circularity is growing with consumers, socks are one of the most thrown-away pieces of apparel. It said a recent Smartwool survey uncovered that while over 80% of respondents recycle their used clothing, they don’t engage the same way when it comes to socks as 46% are unaware of how to recycle them, resulting in 91% throwing away more than one pair of socks per year.

“Through our research, we realized that consumers want to be more sustainable and recycle their socks, but don’t currently have the resources to be a part of the solution,” said Alicia Chin, senior manager sustainability and social impact at Smartwool. “We are deeply invested in providing consumers with simple recycling solutions that make a difference towards a happier, healthier planet. While our goal is to reach total circularity across our product portfolio, there is obviously an urgent need for a recycling solution in the sock category, which is where we’re focusing our initial efforts.”

Turning waste back into a new yarn is creating a circular economy in the region, Chester said.

She said it’s something The Industrial Commons has been working on for about two years, doing a lot of research and development around it. Material Return will be able to produce the yarn, she said.

“We’re excited to work with a brand like Smartwool that exemplifies the same environmental values as we do,” said Molly Hemstreet, co-executive director at Material Return. “We also want to thank all our manufacturing partners who helped make it possible — especially the Carolina Textile District and Diamond Brand Gear. Through the Smartwool Second Cut Project sock take back event, we’re giving consumers an opportunity to support both environmental sustainability and innovative labor practices.”

Material Return started in 2017, has four employees and currently has 15 clients it works with, at least five of which are in Burke County, Chester said.

Some of the local companies Material Return works with include Valdese Weavers, Meridian, DeFeet and Kellex.

What Material Return is doing isn’t being done anywhere else in the country, Chester said during a tour last week of The Industrial Commons new location. She said Material Return is able to pick up the waste and have it transformed back into a new yarn all within 75 miles.

Bobby Carswell, CEO and operations manager, said the idea for Material Return was born from Hemstreet, who also founded and operates Opportunity Threads. He said Opportunity Threads had material waste and Hemstreet couldn’t find anyone to help her recycle it. It was a problem she found other companies had, Carswell said.

With help from Western Piedmont Council of Governments, they found there are around 200 manufacturers in the area that produce some type of textile waste, Carswell said.

But Material Return doesn’t just make yarn out of the waste.

Carswell said Material Return collects and sorts the waste and makes different products out of it.

He said the company partners with a textile reclamation facility that deconstructs the fabric and takes it back down into something called shoddy. And the shoddy fiber that will go into padding and insulation for automotive, refrigerators, appliances and things of that nature, Carswell said.

But, Carswell said, Material Return has partnered with a couple of research facilities in Gaston Textile Technology Center at Gaston College to get the high-quality waste manufactured back into yarns.

Carswell said Material Return will use its new equipment to be able to manufacture this a fiber that gets drawn down into yarn. It then works with the Carolina Textile District members, that’s the membership of the mills that have cutting and sewing, to manufacture these products, he said.

“So it’s a huge ecosystem that just all feeds off of each other and it’s like, I don’t know if anybody else can do it, honestly,” Carswell said.

Chester said because of the assets the region has, it would be hard to do this same process probably anywhere else in the country with the same kind of tight supply chain and low carbon footprint.

And the idea is to keep the material in the supply chain indefinitely, Chester said.

As for how much it costs a business to recycle their waste, the payoff is not necessarily in immediate returns.

Chester said the businesses pay for the processing of the waste and then they will pay to get the yarn back once Material Return starts producing it with its new equipment.

And companies are able to market their products to the consumer as made from recycled materials, she said.

To find out more about Material Return, visit thematerialreturn.com.

For information on The Industrial Commons, visit theindustrialcommons.org.

Burke County commissioners have approved a lease agreement with a developer for “glamping” at the county park at Lake James.

Herron Harper, left, talks about his work at Material Return last week as Bobby Carswell, center, and Patrick McClure listen. The company takes material waste from businesses and turns it back into a product that can be used again.

Material Return collects and sorts material waste from businesses and turns it back into a product that will go back into the production stream.

The Industrial Commons held a ribbon-cutting last week at its new home on Hopewell Road. It is in the former Duralee/Carolina Shoe building.