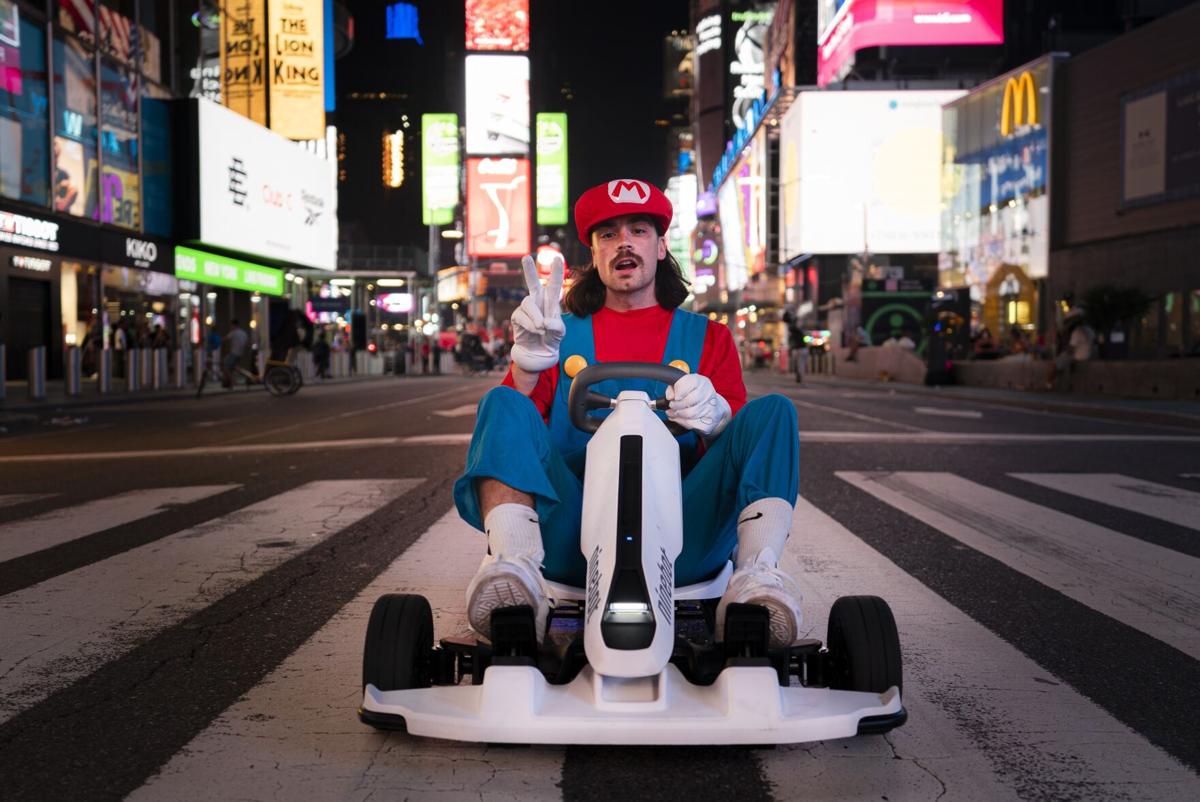 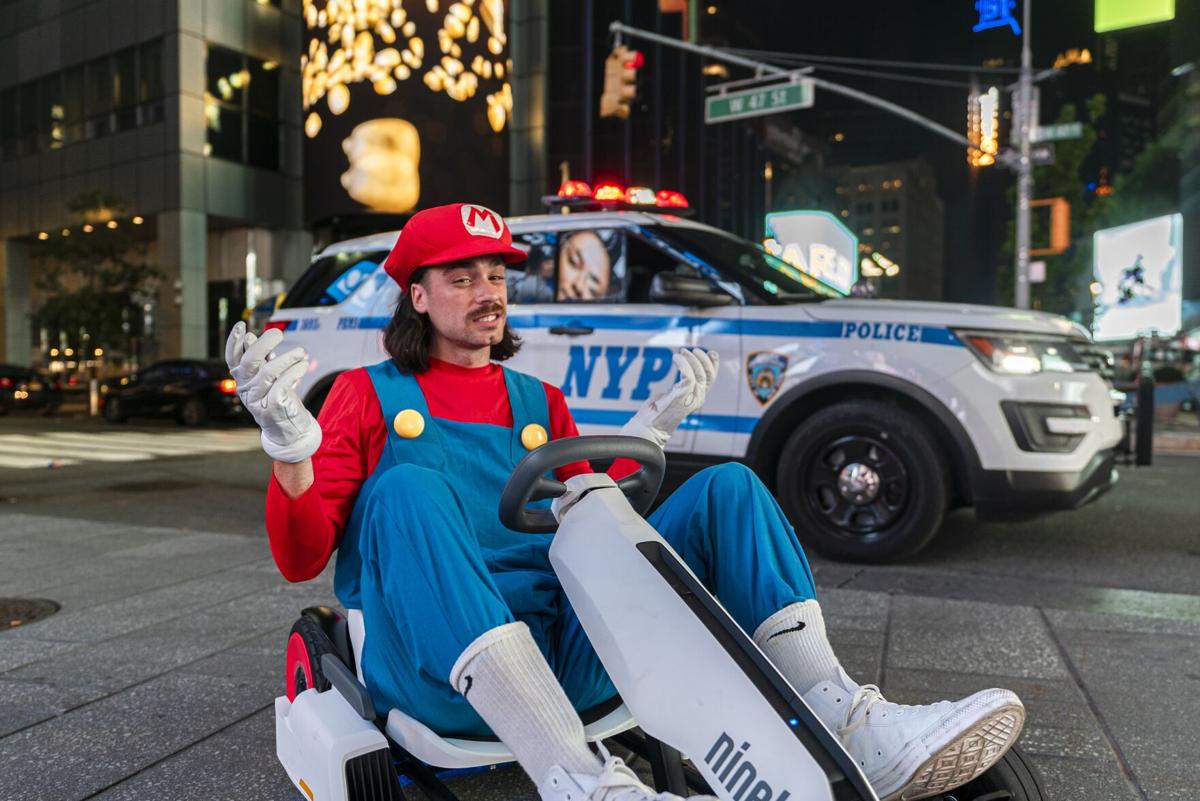 "Mamma mia!" Simpson and his crew tried to stay on the good side of the New York Police Department during filming.

NEW YORK — Anyone who’s ever played a “Mario Kart” Nintendo video game probably has wished they could race on Rainbow Road or take out an opponent with a strategically placed banana peel in real life.

Last month, Simpson and his friend, Irving Salazar, broke out their Mario and Luigi costumes and go-karts, hit the streets of New York City, and enjoyed some real-world Mario Kart racing.

“It’s kind of been an idea I’ve had for a couple years,” Simpson said. “... I went online and found some electric go-karts and hired a film crew. I was like, ‘OK, let’s go do this. We’ll spend a couple days filming and editing and then release it and see what happens.’”

What happened was the video (bit.ly/3bPdkld) exploded in popularity on YouTube. It has racked up north of 66,000 views and nearly 400 comments in just four weeks on the platform where Simpson has 14,200 subscribers.

While he is experiencing quite a bit of that popularity now — Simpson said he “blew up” on the TikTok video-sharing mobile application, and even that might be an understatement with 3.9 million followers — Simpson’s foray into video-making was as much out of necessity as anything else.

“The idea kind of happened when I didn’t know how to do anything. I knew I wouldn’t really know how to execute it, so I kind of taught myself over the years how to shoot and edit video. I worked for some clients and some companies making videos for them.”

Before he was making videos in New York, Simpson was home-schooled in Morganton — where he still has family and friends to visit — and attended Western Piedmont Community College. That childhood and the following college years were when Simpson really stoked his love for the Mario Kart series.

“I grew up playing it on Nintendo, then in college, we played it on the Wii version,” Simpson said. “I think with anything you’re trying to create on the internet, you have to play into trends or things that people are familiar with in order to find some success. I was just happy that it was something I really enjoy, too, so it doesn’t it make feel like work. It’s something you’re creating that you enjoy and you know a bunch of people will enjoy, as well.”

Unlike firing up the old Nintendo 64, picking a character and a race track, Simpson and his colleagues had to work through a number of logistical issues. Before they could race through NYC and drop a few of those banana peels, Simpson made sure all the details were taken care of.

“No. 1 was just finding go-karts that I thought I wouldn’t go to jail over riding around in New York City,” Simpson said. “I was going to buy some gas-powered ones, but then I found that you can buy electric-powered go-karts. Funnily enough, you have to buy two pieces. So, I thought I’d bought the full go-kart, but you actually have to buy the back two wheels, which is the motor, as well. When they showed up, I was like, ‘Where are the back two wheels?’

“So, we had to push the shoot date back two weeks. But when we got those, hauling them around New York City was a pain. Then, just coordinating with everybody to make sure we were all on the same page.”

As seen in the video, the sight of the Mario Brothers taking a spin through the streets and parks of the big city drew quite a few grins and grabs for phones to take videos of the video-makers. Being able to bring entertainment to folks not just online, but also in the midst of daily life, was one of the rewards of the project.

“For the whole filming day, that was probably the best part,” Simpson said. “My friend, Irving, who rode with us was like, ‘I didn’t think it was going to be that fun. That was the most fun I’ve had in a long time.’ It was just so fun driving by and getting people’s reactions and seeing them smile and saying, ‘What just happened? What did I just see?’ I kind of felt like a superstar there for a minute.”

Staying on good terms with New York’s finest was a concern — but even a few of the NYPD seemed to get a kick out of the project.

“The biggest worry we had was, obviously, dealing with the cops in New York City,” Simpson said. “Thinking, like, ‘Are we going to go to jail? Are we going to get arrested?’ That initial scene in the video where we’re going through a traffic stop, I didn’t even realize it was a legit car traffic stop. So, my heart was kind of pounding. Some of the cops didn’t let us through, then some of them did. Every time we passed a cop, (I was worried). But it went smooth, ultimately.”

Above all of that, however, Simpson mainly is relishing in the knowledge and the reward of making one of his longtime dreams a reality.

“To be honest, the No. 1 thing I wanted to accomplish was just doing it,” Simpson said. “I’ve had the idea for so long, so I just wanted to go out and execute it properly for the vision I had in my own head. I know when it comes to ideas, if you sit on them for too long, it just doesn’t create space for new ideas.

“I’m just happy we went out, we executed, we filmed it and it turned out pretty good. I was happy with how it turned out, so now I have space in my head for new ideas.”

Those new ideas began flowing immediately, as Simpson said he already is working on his third YouTube video since the Mario Kart addition to his channel. His next big project is going to hike Tanzania’s Mount Kilimanjaro in October.

It’s just the next step in Simpson’s fun journey from small-town life into the big city, and then the wide world of, well, almost anything.

“It was a difficult adaptation at first,” Simpson said. “It’s just a completely different world. I was born and raised and didn’t really travel much outside of North Carolina. It’s been eye-opening and challenging and an exciting adventure the entire time. There’s a lot out there in the world you can learn and grow from.

PLEASE SHARE: Sinker, the name rescuers gave to the dog, is doing well at Burke County Animal Services and hoping his family will come get him. He didn't have a collar or a microchip when he was found.

"Mamma mia!" Simpson and his crew tried to stay on the good side of the New York Police Department during filming.