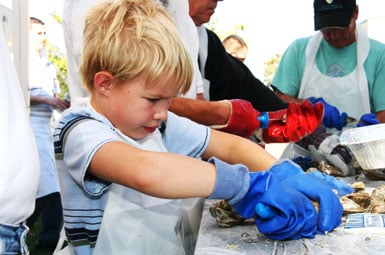 Ben Sasser shucks oysters at a previous October Oyster Outing. The event is held each year as a fundraiser for the Burke Arts Council. 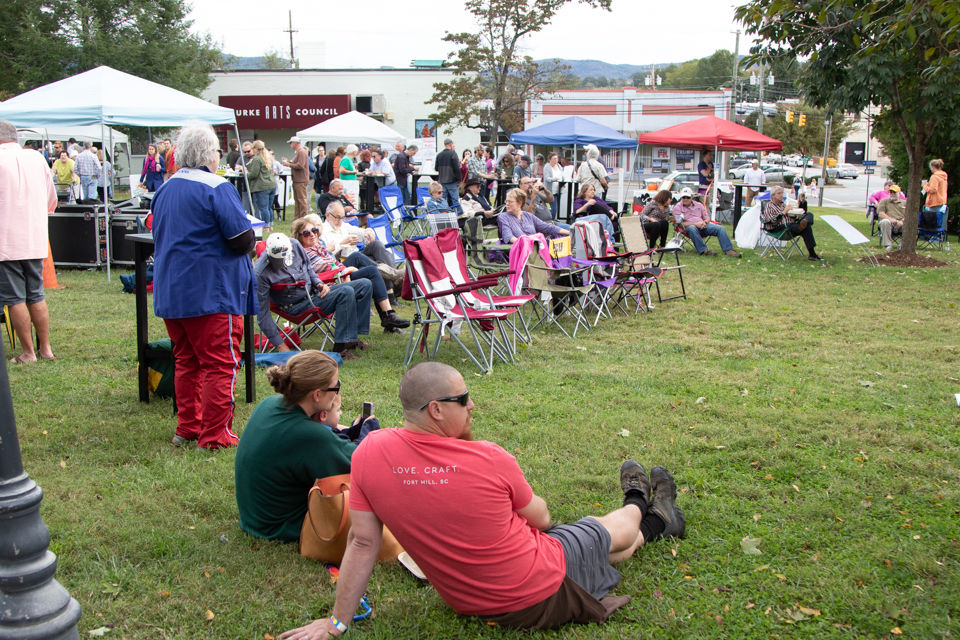 The October Oyster Outing normally draws a large crowd to the grounds of the historic Burke County courthouse. 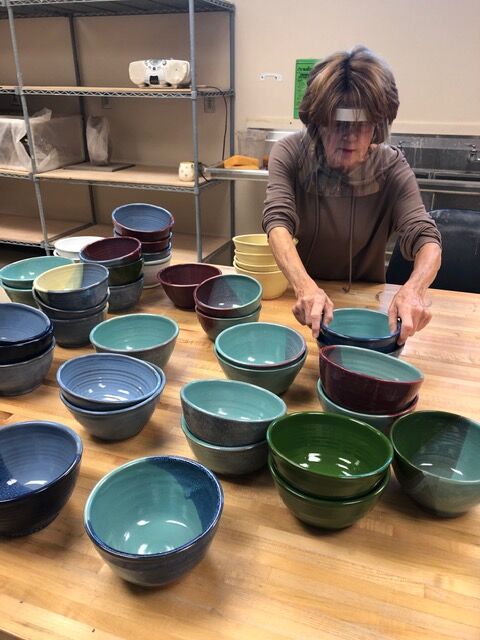 Deborah Jones, executive director of the Burke Arts Council, is pictured with some of the bowls that will be for sale.

The Burke Arts Council has cancelled its popular October Oyster Outing due to the coronavirus pandemic, but has another tasty fundraiser planned to take its place.

“We know that the annual October Oyster Outing is a community favorite and we regret that due to the present circumstances, we cannot host the event this year,” said Deborah Jones, executive director of the Burke Arts Council. “It’s also our biggest fundraiser of the year. We wanted to come up with an event that would keep everyone safe, observing the state guidelines, but still enjoying some of the customary foods from the annual event.”

The BAC will present a “Souper Oyster Event” drive-thru fundraiser starting at 1 p.m. on Saturday, Oct. 17. People will have the opportunity to purchase three different kinds of soup: New England Clam Chowder, Brunswick Stew or Oyster Stew, as well as fresh cornbread. The soup and cornbread will be made by Phil Scarboro from Timberwoods restaurant. Prices for the soups range from $5-6 for a pint and $10-11 for a quart. Fresh homemade cookies from Sweet and Savory Delights Bakery also will be available for $2 for a package of three cookies.

Participants can order and pay online at burkearts.org in advance by noon on Friday, Oct. 16, and then pick up their orders the day of the fundraiser at the new Burke Arts Council building at 506 S. Sterling St. in Morganton. Jones said people also can drive up and order the day of the event.

The highlight of the fundraiser will be beautiful stoneware bowls made by the Professional Crafts – Clay students at Western Piedmont Community College that will be sold online and at the event. The bowls, which Jones described as slightly larger than a soup/cereal bowl, come in a variety of colors and cost $35 each.

Jones noted that the soups and stews will be served in paper to-go bowls by the pint and the quart, while the stoneware bowls will be sold separately. Photos of the bowls are available for viewing at burkearts.org. There are 100 bowls total for sale.

“WPCC Professional Crafts Coordinator Courtney Long conceived the idea of creating the bowls in an effort to give her students the production pottery experience and practical knowledge in preparing and completing a large simulated order - at the same time, providing support to the Burke Arts Council,” Jones said. “We purchased the clay, and the students went to work.”

The Professional Crafts - Clay program is a two-year program that prepares graduates to become independent studio artisans or seek employment in creative industries, according to information provided by WPCC. Students learn production skills, design concepts and craft history. For more information, contact Long at 828-448-3552 or clong@wpcc.edu.

Proceeds from the fundraiser will be used for general operating support of the Burke Arts Council. Jones encouraged people to come out and participate.

“The soups will be perfect for the fall weather – the same delicious recipes you have had at past oyster outings,” Jones said. “And you don’t have to get out of your car. The event won’t be nearly as much fun, but the food will be awesome, and you will be providing much needed support to the arts in our community.”

Take a look back at major news stories from around Burke County from Oct. 4-10, and read more about each story at the links attached.

Ben Sasser shucks oysters at a previous October Oyster Outing. The event is held each year as a fundraiser for the Burke Arts Council.

The October Oyster Outing normally draws a large crowd to the grounds of the historic Burke County courthouse.

Deborah Jones, executive director of the Burke Arts Council, is pictured with some of the bowls that will be for sale.