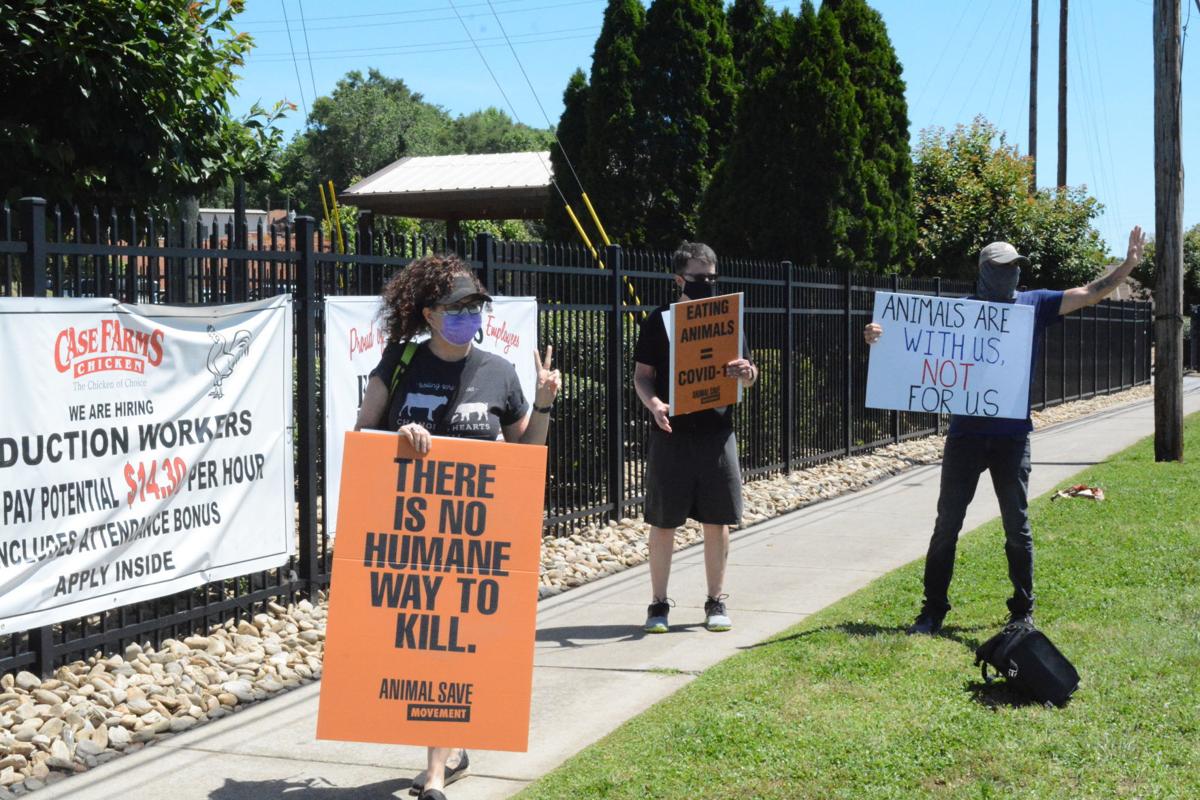 Members of Animal Save, a group that's mission is "to hold vigils at every slaughterhouse and to bear witness to every exploited animal" met at Case Farms in Morganton Monday. 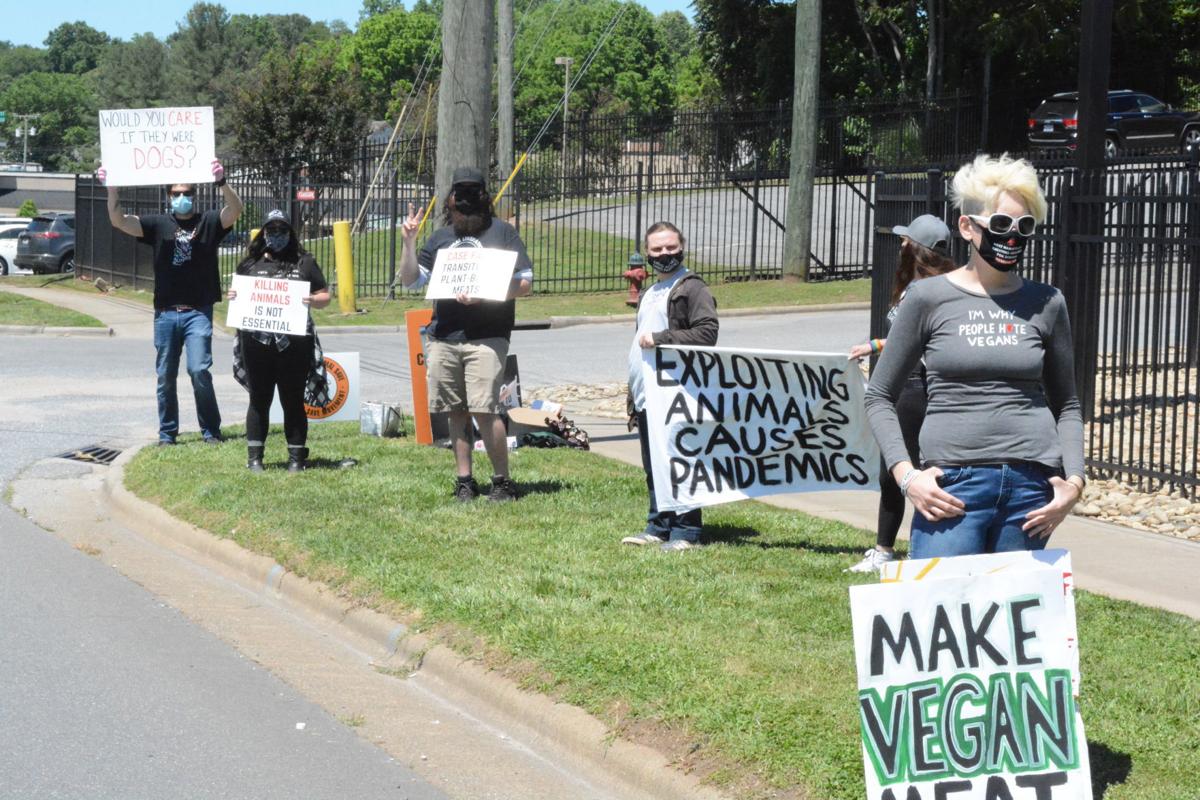 Members from the Asheville and Greenville, S.C. chapters of Animal Save gathered outside Case Farms from 9 a.m. to noon Monday. 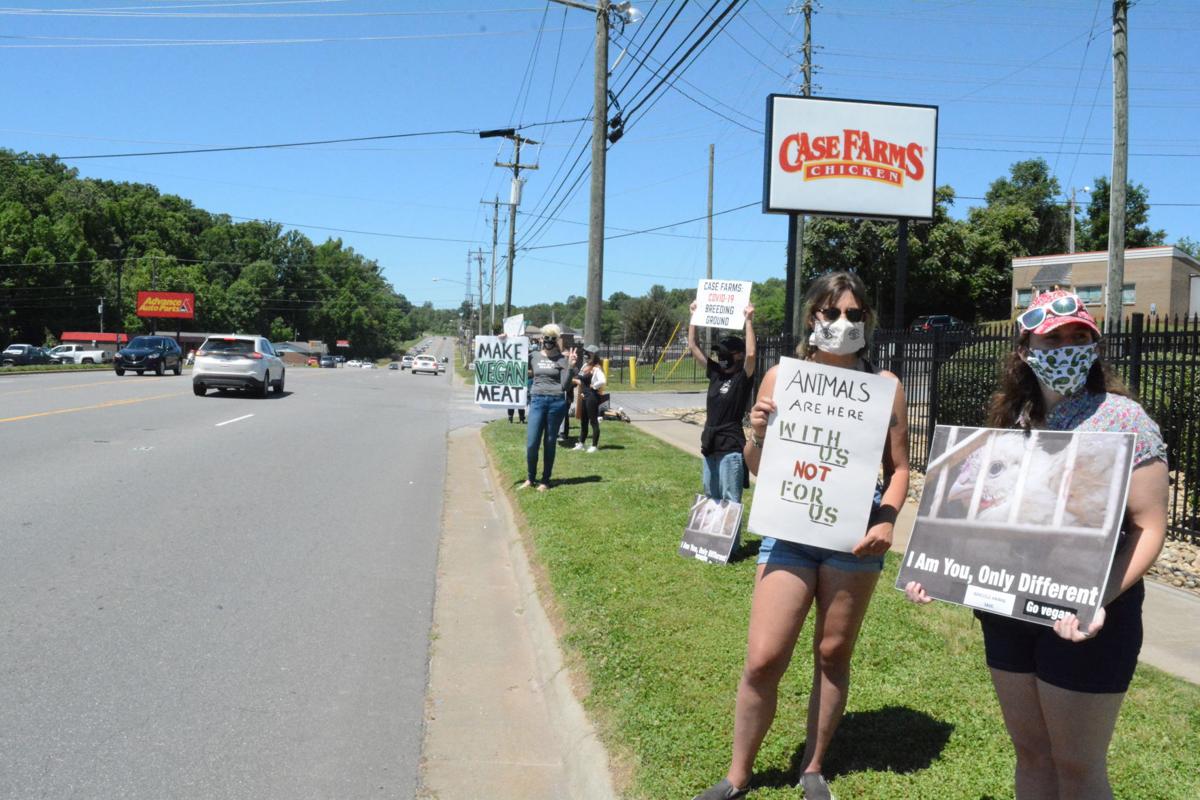 According to Greenville Animal Save organizer Trey Morrow, one demonstrator traveled from Michigan to participate in Monday's peaceful protest. 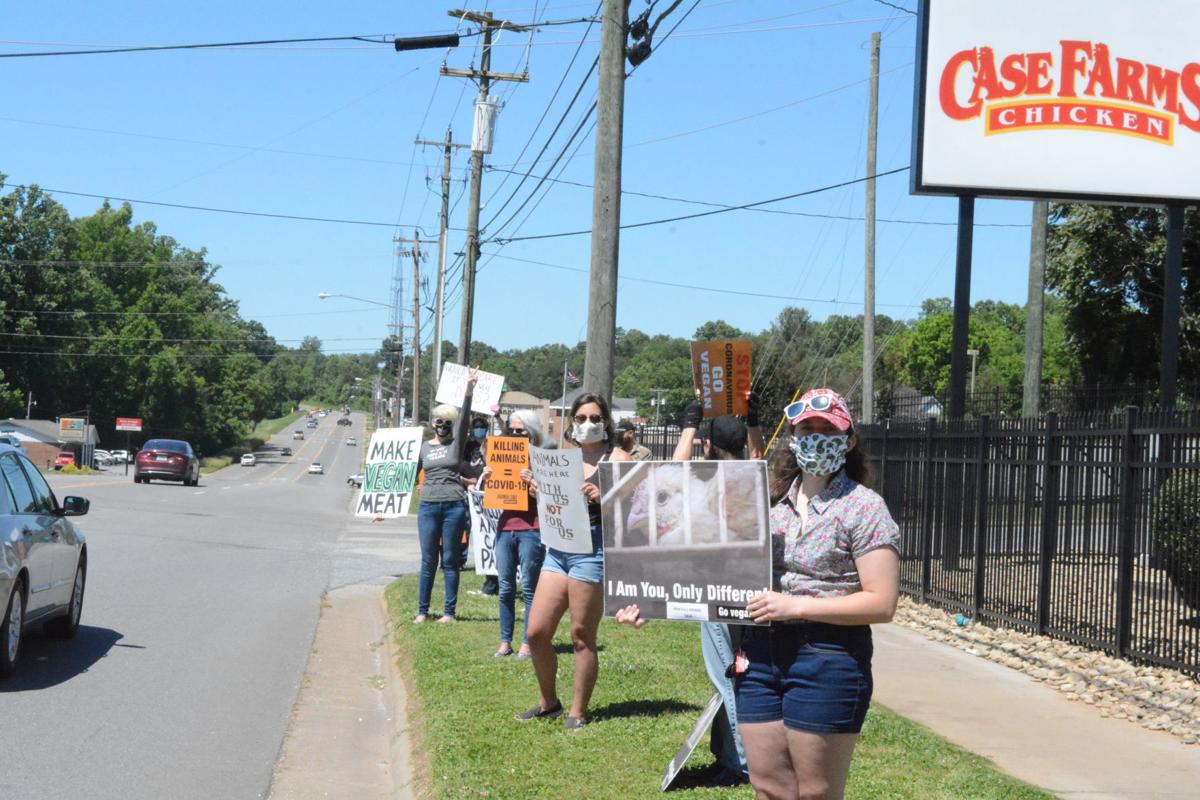 According to the co-founders of Asheville's Animal Save, the group plans to protest outside Case Farms at least once per month.

A group of more than 15 demonstrators protested outside of Case Farms in Morganton on Monday morning.

The group was part of Greenville, S.C. and Asheville’s Animal SAVE movement. Animal SAVE started in Toronto in 2010 and its mission is “to hold vigils at every slaughterhouse and to bear witness to every exploited animal,” according to its website.

Kai Fenn is the co-founder of Asheville’s Animal Save. Fenn said the group came to Case Farms for a number of reasons, including to protest the unsanitary conditions of Case Farms, which he said could have led to the outbreak that was discovered at the chicken processing plant last month.

“They confine them in unsanitary conditions,” Fenn said. “They don’t give them a lot of fresh air. They pump them full of antibiotics.”

Fenn said the group was also protesting to stand with the animals, who he said “are sentient beings who full feel fear and pain and are given an undignified existence by being killed as babies.”

Tony Hoppe, an ex-police officer originally from Philadelphia, co-founded Asheville’s Animal Save with Fenn in early 2018.

“We’ve been conditioned all our lives to think that we need to eat animal flesh and consume animal secretions and what not,” Hoppe said. “Each vegan is proof that that’s absolutely untrue.

“We’re just out here peacefully trying to educate the public. The animal ag(riculture) industry is totally destructive to the animals and their well-being but also to our health and to the health of our planet and the climate.”

Still, Hoppe recognized that the issue is not as simple as abruptly closing down all animal agriculture food processing factories.

“We’re not about just shutting down (plants) and not caring about the workers,” Hoppe said. “We certainly understand people need jobs. But we’d like to see (these plants) transfer to plant-based meats or some other option that doesn’t involve the completely unnecessary killing of all these sentient beings that want to live.”

According to Hoppe, Animal Save has come to Case Farms many times in the past, including once when it was only him protesting.

“The message gets delivered a bit more effectively when there are 20 people here instead of just one maniac,” he joked.

According to Greenville Animal Save organizer Trey Morrow, the group plans to return to Case Farms as North Carolina moves into phase two of its reopening.

For Morrow, said Animal Save urging Case Farms to transition to plant-based vegan meats would allow employees to work under safer conditions.

“We’re hoping that Case Farms gets the message that there is no sanitary way to run a slaughterhouse,” Morrow said. “If you have blood, guts, urine and feces inside of a facility with animals that have been cramped together and with humans who are cramped together working inside, it’s going to be a breeding ground for disease.”

Morrow said he and another group from Animal Save will travel to Columbia Farms in Greenville, S.C. today to ask that facility to transition to plant-based vegan meats.

Asheville Animal Save’s Savannah Woodard pointed out the alarming number of chickens who die each day.

“We’re here in solidarity with both the workers but the animals, who are murdered by the truckful,” Woodard said. “Every single day by the truckloads, thousands of animals (are) constantly (killed).”

“We want the public to know what this is about,” Fenn said. “(Animal agriculture) is not a healthy industry. We encourage people to go vegan.”

Biden: 'Prepared to negotiate,' on infrastructure

Biden: 'Prepared to negotiate,' on infrastructure

Biden calls for peace and calm after MN shooting

Biden calls for peace and calm after MN shooting

After a few months of building, it’s almost time for humans to visit Morganton’s new The Human Bean.

Perusing for pennies at the pump

I recently drove to Hickory for a few errands and to visit a friend. About the time I passed the Drexel exit on Interstate 40, I noticed the g…

ICARD — They might be enemies on the field, but brotherly love is easy to find between the Cavaliers and the Tigers in the midst of a tragedy.

Members of Animal Save, a group that's mission is "to hold vigils at every slaughterhouse and to bear witness to every exploited animal" met at Case Farms in Morganton Monday.

Members from the Asheville and Greenville, S.C. chapters of Animal Save gathered outside Case Farms from 9 a.m. to noon Monday.

According to Greenville Animal Save organizer Trey Morrow, one demonstrator traveled from Michigan to participate in Monday's peaceful protest.

According to the co-founders of Asheville's Animal Save, the group plans to protest outside Case Farms at least once per month.