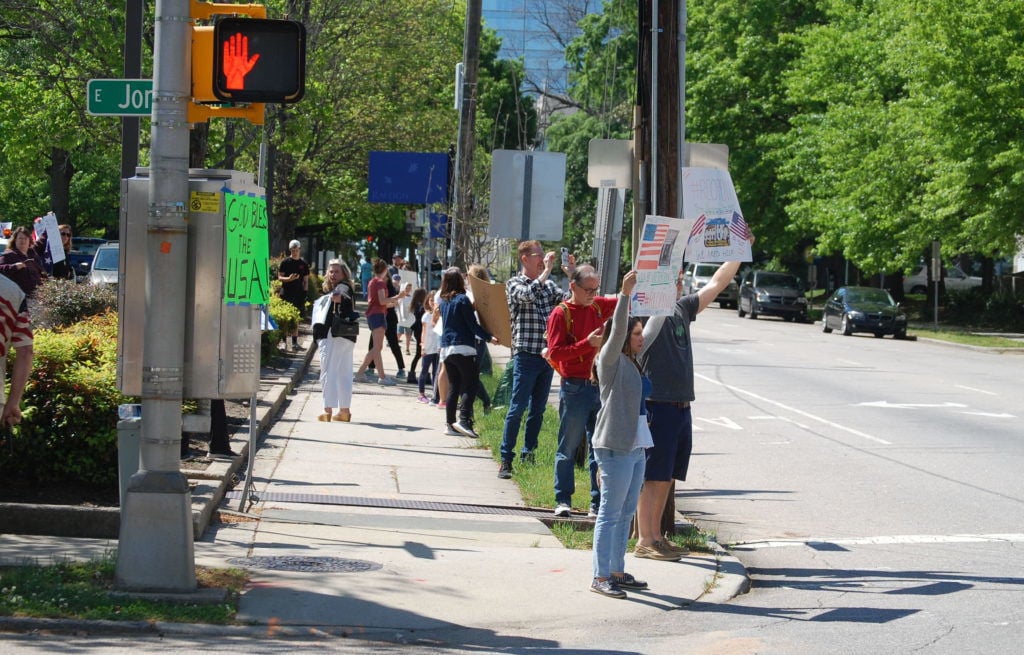 ReopenNC members protest across from the Legislative Building in Raleigh April 14. 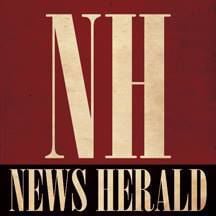 A Facebook group that has gained statewide attention for organizing protests in Raleigh against Gov. Roy Cooper’s executive order to close non-essential businesses has local ties, as the group was cofounded by a Burke County woman.

Morganton’s Ashley Smith serves as press coordinator for Reopen NC, a Facebook group started April 7 which has more than 43,000 followers as of Thursday afternoon.

On Tuesday, more than 150 of the group members gathered in protest at the corner of Jones and Wilmington at the State Capitol exercising their First Amendment rights. The State Capitol Police shut down the protests, stating that the organizers were in violation of Gov. Cooper’s Executive Order 121, which bans gatherings of more than 10 people.

One woman, Monica Faith Ussery of Holly Springs, was arrested for violating an executive order and was released on an unsecured bond, according to Smith.

“Our mission is really just to apply administrative pressure,” Smith said. “We’re doing phone call, email and Twitter campaigns. We really want to just be a squeaky wheel — kind of an administrative headache, if you will, to have our voices heard.”

Smith said the protests are happening weekly and the group will continue to go back each Tuesday. She said she and the group’s cofounders are in communication with the Raleigh Police Department and attorneys to determine their Constitutional rights.

Smith said Reopen NC has a contact in Raleigh who has for the past few weeks been showing up to the State Capitol parking lot on Tuesdays because he knows that’s when the governor is there holding his administrative meetings. The man had been going there to “hold his sign and maybe honking his horn occasionally,” according to Smith.

“We are peaceful North Carolinians who are concerned about the economic fallout from (the coronavirus pandemic),” Young said. “Even just looking around Morganton, how many businesses are going under that may potentially never reopen? Here we were in Morganton — one of the six downtowns in the state for how many years in a row, and we’ve had a very small number of cases in our county and yet, I don’t know one person who is not affected by this financially at this point. So, this is something that hits home and is far-reaching for everyone.”

According to Smith, she has been against the shutdown since Cooper’s March 17 announcement where he closed restaurants and bars for sit-down service. She said she has been taking guidance from and following Dan Forest, N.C. lieutenant governor and President Donald Trump, who on March 16 issued guidelines recommending a 15-day shutdown to slow the spread.

Smith said she did not expect for the group to gain so much attention, but that she’s proud of the outpouring of support the group has had, and that people are using their voices to communicate their thoughts on the issue.

“We’ve seen firsthand through our business accounts — these people are our friends,” Smith said. “They’re people that we’ve been doing business with for many years now. We’ve seen a lot of them close, and we’ve heard from a lot of them that they’re not going to have the resources to reopen. This continued shutdown is just not sustainable for our state economically.”

In response to Tuesday’s arrest, Senators Warren Daniel (R-46) and Danny Britt (R-13) issued a letter to the governor asking him to “clarify whether (his) executive orders have prohibited the First Amendment right of North Carolinians to peacefully protest against (his) executive orders.”

During a scheduled press conference Wednesday, Cooper was asked about the letter.

“Executive orders that I’ve issued do not interfere with people’s constitutional rights to express themselves,” Cooper said. “However they do deal with unlawful mass gatherings and people who will disobeying those orders, because they’re put there in order to protect the people of North Carolina, protect people from transferring this virus from one person to the next. Those executive orders are there for public safety and we expect people to obey those orders wherever they are and whatever they’re doing.”

Cooper added that public health experts have advised him and his team that lifting restrictions all at once could be dangerous.

“As we slowly bring the lights back up, we have to monitor for troubling signs of a spike in cases that could overwhelm our hospitals and risk lives,” he said. “So, getting this right — testing, tracing and trends — is the most important step. It will lead to getting our state’s economic recovery, right, too, by sending people back to work and school while making sure recovery money is flowing to people in small businesses is absolutely essential.”

Still, Smith said the shutdown could potentially impact the mental and physical health of those who lose their jobs.

In the meantime, Smith said to expect a continued effort from Reopen NC, which added more than 5,000 members from Wednesday to Thursday.

“There’s definitely more to come,” she said. “Stay tuned. We’re just a group of concerned North Carolinians that want to see our economy survive this. We don’t want anyone to get hurt, but we’re posing the question: ‘If (the shutdown) continues, what are we really going to have to come back to?’”

ReopenNC members protest across from the Legislative Building in Raleigh April 14.