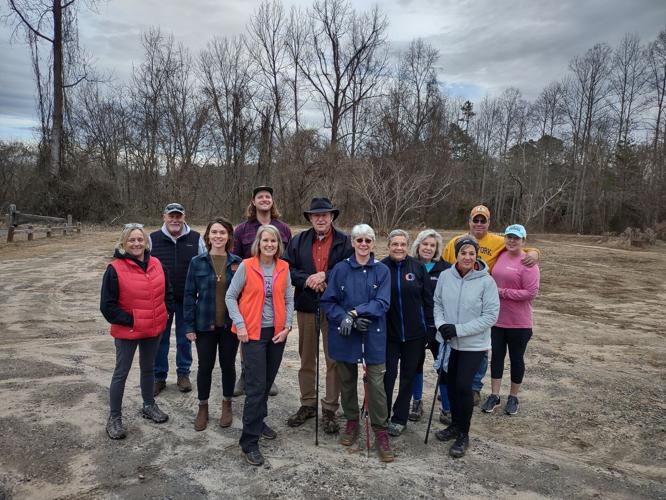 Pictured are the people who participated in the most recent “Hike & Learn” event, sponsored by the Friends of Fonta Flora State Trail. 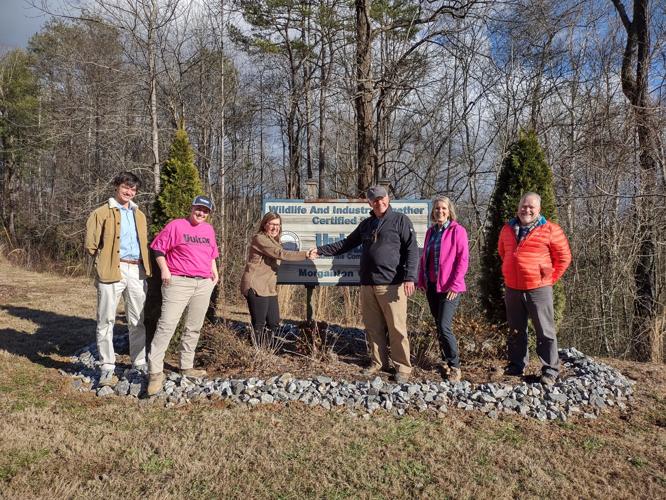 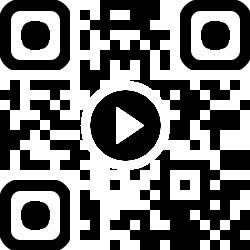 VIEW: To watch a video of the placement of a memorial stone on the Morganton greenway commemorating local participation in the Revolutionary War, just point your smartphone camera at the QR code, then tap the link. 

A recent presentation by members of the nonprofit, business and local government worlds provided updates on the creation of local trails for public recreation.

The recent “Hike & Learn” event featured the role of the Morganton greenway and its Rocky Ford access. The series was created by Beth Heile, past president of Friends of Fonta Flora State Trail, in 2021 to highlight the trail sections that are on the ground, educate the community about how the sections came to exist and have lunch at a local establishment emphasizing the economic impact trails bring.

Butch McSwain, Morganton city council member and former assistant director of the Morganton Parks and Recreation Department, recalled when the city began acquiring 6 miles of property along the Catawba River in the early 1990s and noted the many hours it took Gary Leonhardt, then department director, to oversee the greenway’s construction while still managing the existing parks and athletic programs.

The organization, created in 2019 to spearhead the completion of the 100-mile trail that runs from Morganton to Asheville, is recognized by North Carolina State Parks as the official nonprofit for the trail. The organization will receive funding to help get trail on the ground across the three counties in the trail corridor.

The Overmountain Victory State Trail (part of the Overmountain Victory National Heritage Trail) is another state trail collocated on the greenway route. The Park Service placed historical markers along the trail section commemorating the historic Kings Mountain march that took place during the Revolutionary War. From Rocky Ford, the trail continues as a Commemorative Motor Route northeast via US 64 to Lenoir. Like F3ST, this state trail has an official nonprofit, OVNCST-Friends Inc., headquartered in Morganton and led by local historians Bryant and Linda Lindsey.

Also during the presentation, Michael Lowther, owner of Overmountain Cycles, and Brittany Watkins, volunteer and engagement coordinator for the Foothills Conservancy of North Carolina, discussed the 4.5 miles of mountain bike trails under construction in partnership with the city of Morganton. The trails will be accessed from the parking lot (away from the other trails) and include beginner, intermediate and advanced trails. Hiking will be allowed on most of the trails.

The parking area also will serve as the western terminus of The River Trail. The planned 20-mile hiking and biking trail will be a mix of natural surface, crushed cinder and paved trail types as it wanders along the river banks and into the downtown areas of eastern Burke County.

Christa Pearson and Heile, board members for the Burke River Trail Association, the nonprofit for the trail, shared information about it during the presentation. Though economic development is a goal of the trail, Heile said she has been surprised by the opportunities for housing, office and retail space and eateries brought by trail discussions—before the trail is even on the ground.

“The other benefit has been the sense of pride shown by the local governments as they have a new attraction on the horizon that will highlight their history and natural resources while offering health and recreation benefits to residents,” Heile said. “Starting at Rocky Ford, four miles of the trail route have been nailed down with verbal agreements, and the paperwork is in process. The written agreement needed from private landowners is called a trail easement, which allows the public to access the property.”

The property for which they are negotiating easements begins at the Grace Ridge Retirement Community and ends at Vulcan Industries. Stakeholders gathered at Vulcan last week to discuss the trail location.

“Since the property is an active quarry with large trucks and machinery, the safety of trail users is extremely important,” Heile said. “The overall site began operation in 1986 and consists of about 309 acres, nearly 100 of which serve as buffers. Within the buffer area, hikers and bikers will be kept safe. Vulcan is excited about populating their section of trail with educational kiosks explaining mining operations, environmental stewardship efforts and how stone is used in everyday applications.”

An official with Vulcan noted the company’s history of building things.

With all the existing and planned activity at Rocky Ford, the city of Morganton is looking at updates for the site, Heile said. She has joined officials from the North Carolina Department of Transportation, the North Carolina Wildlife Resources Commission, the city of Morganton and the Grace Ridge Retirement Community to meet at the site to discuss options for amenities, such as an improved access driveway, parking, restrooms, picnic area and kayak launch. The next step is to look for grants for funding the new trailhead and park.

GLEN ALPINE — A longtime Glen Alpine eatery is getting new ownership, a new name and a few new recipes for customers to try.

VALDESE — It has been sitting empty for more than three years but it soon will be buzzing with activity again.

A local relief organization is looking for a new home after receiving notice property owners intend to sell.

Hillman Beer was expected to open a temporary taproom in January across the street from where it will have its permanent location.

Pictured are the people who participated in the most recent “Hike & Learn” event, sponsored by the Friends of Fonta Flora State Trail.

VIEW: To watch a video of the placement of a memorial stone on the Morganton greenway commemorating local participation in the Revolutionary War, just point your smartphone camera at the QR code, then tap the link.