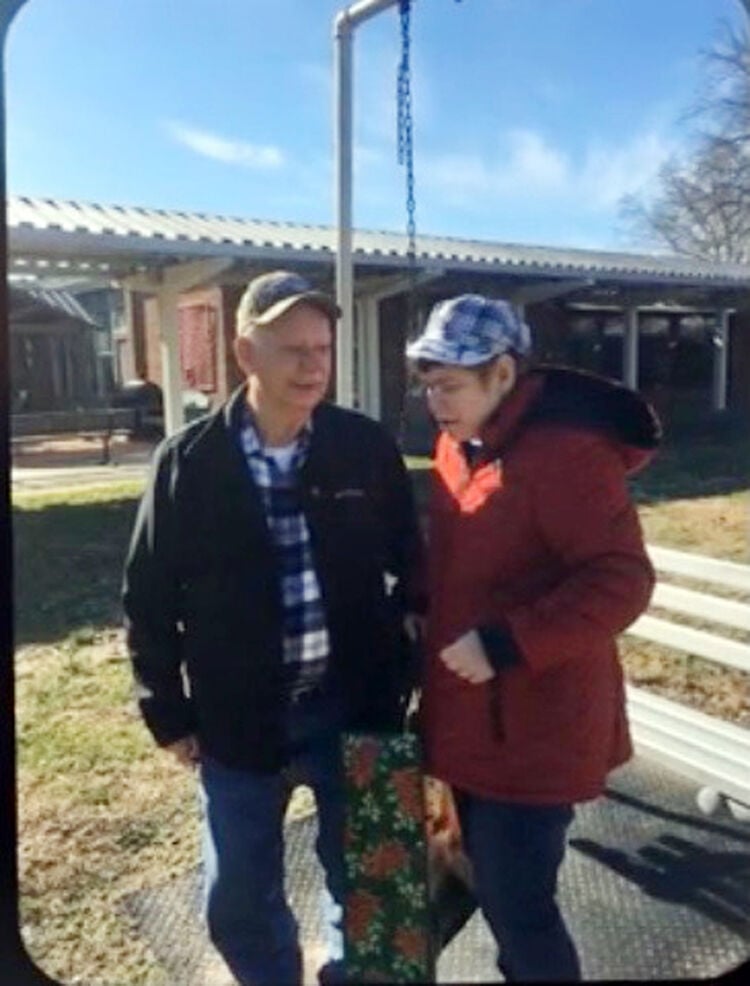 Tammy Huffman, right, has a visit with her father, James Carl Huffman, at J. Iverson Riddle Developmental Center. He visited her on the morning of June 12. She died after being found submerged in a bathtub that evening. 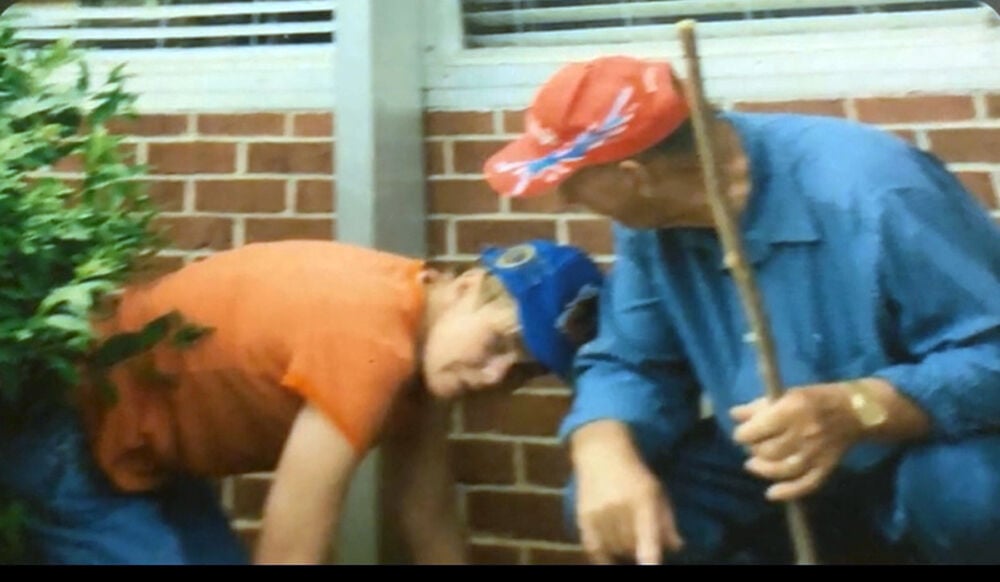 Tammy Fay Huffman liked working and being outside, according to family. In this photo she is seen working alongside her father, James Carl Huffman. 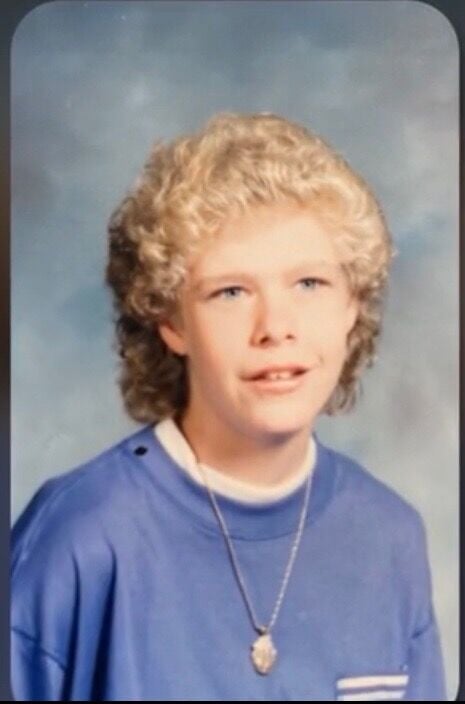 J. Iverson Riddle Developmental Center has been found negligent in the death of a resident who was found June 12 submerged in a bathtub.

A statement of deficiency dated June 25 from the North Carolina Division of Health Service Regulation says the patient, who previously has been identified as Tammy Fay Huffman, 49, was without supervision for 34 minutes before she was found dead. She was supposed to have 24/7 supervision due to a recent surgery.

The statement of deficiency does not name Huffman as the patient and instead refers to her as client #1.

The report is from state officials who survey facilities such as JIRDC to make sure their programs meet federal standards for participation in Medicaid and Medicare.

It said review of the facility’s internal abuse, neglect and exploitation policy “defines neglect as the failure to provide care or services necessary to maintain the mental and physical health of the resident.”

Kelly Haight Connor, communications manager for North Carolina Department of Health and Human Services, said when the Division of Health Service Regulation finds deficiencies, the facility then creates a Plan of Correction to address those deficiencies and implement monitoring to ensure full compliance with rules and regulations. J. Iverson Riddle Developmental Center has 10 business days to submit its plan of correction which will be made public at https://bit.ly/2WnvQgZ, Connor said.

As of Thursday, no plan of correction was available.

According to family members and the statement of deficiency, Huffman had recently had cataract surgery and was supposed to have 24/7 supervision until her eye healed because she had a tendency to pick at wounds.

The North Carolina Division of Health Service Regulation said its findings are based on observations, record review, interview with management staff and video recordings.

Based on that, the report says Huffman, who lived in Ash Cottage, spent the afternoon of June 12 with other residents and staff, as was her routine. It says she had transfers of supervision to various staff at different times throughout the afternoon. However, the report says observation of Huffman’s supervision transitions between staff were informal and conducted among staff without a consistent protocol.

That morning, Huffman’s father and older sister visited her at the center, her brother Gary Huffman told The News Herald the week after her death. He said it was only the third time they had seen her since COVID-19 restrictions started.

Huffman’s father and sister had said she was doing well, and her behavior was better than the last time they had seen her, Gary said.

Gary said it was that evening when he got a call from his mom telling him that his sister had died.

The report from the North Carolina Division of Health Service Regulation said further reviews and interviews revealed Huffman ate a small portion of her dinner, put away her place setting from dinner in the bin and then stood near the couch in the dining room area. JIRDC staff told surveyors that sitting or waiting by the couch was a usual process for Huffman and other residents, as they usually would wait for a group to return back to the dayroom on the unit or other activity, according to the report.

After standing beside the couch in the dining room, Huffman casually sat down on the floor and took off her shoes and socks. She then stood up, walked out of the dining room and back onto the unit without being seen by the multiple staff in the dining room, who were all engaged in finishing up dinner and helping clients, the report said.

The report said subsequent review revealed Huffman walked out of the dining room, down the hall, around the corner and straight into the bathroom with the bathtub, unwitnessed by staff. It said review of Huffman’s habilitation plan revealed she liked to take a bath to relax and had most skills required to complete bathing independently or with verbal prompts from staff. Huffman’s habilitation plan revealed she had severe intellectual disability, possible autism and a history of a seizure disorder, according to the report.

None of the staff were in the hallway until they started looking for Huffman and found her unresponsive in a bathtub, the report said.

The report said staff immediately removed Huffman from the tub to begin CPR and called 911. Burke County 911 received the call at 5:53 p.m.

Staff continued CPR until emergency personnel arrived and CPR was continued for a period of time but was unsuccessful and she was pronounced dead at the scene, the report said.

The steps an employee needs to take in an emergency response to finding a victim is on the back of every staff member badge. One of those steps is to call a “code blue” and announce the location three times. A “code blue” at JIRDC alerts any available staff at the center with CPR training to respond to the area announced to either help revive a resident who isn’t breathing and doesn’t have a pulse or monitor other residents in the area while staff perform lifesaving measures.

Multiple sources with knowledge of the incident have told The News Herald a code blue was never called when Huffman was found. The News Herald is not naming the sources to protect their identities.

When asked whether a code blue was ever called, NCDHHS would not answer the question. Connor said, “Answers to questions about the medical services or procedures associated with an individual’s care or treatment is confidential patient information and cannot be disclosed.”

The incident report from Broughton Police Department said it investigated Huffman’s death as an unattended death and, because of that, requested an autopsy. The incident report says an autopsy was scheduled to be conducted at Wake Forest Baptist Medical Center in Winston-Salem on June 14.

Huffman’s death certificate says the cause of death is pending. The News Herald has requested the autopsy report and as of Friday has not received it.

The investigation report The News Herald received from the state has the resident’s name redacted. It says the supervisor wasn’t able to find who The News Herald believes was Huffman. He checked her bed and bathroom but didn’t locate her. It says he and a certified nursing assistant went to the hallway bathroom and that’s where they found her submerged in the bathtub.

The report says the supervisor pulled Huffman from the tub and started trying to resuscitate her and told the CNA to get the nurse. The group tried to use an Automated External Defibrillator but could not get it to work, according to the report. So the supervisor continued CPR until an EMS crew got to the scene.

The report said a review of findings from the internal advocacy investigation revealed Huffman was without supervision for 34 minutes despite required line-of-sight supervision guidelines.

“Further review of the report findings revealed a substantiated finding of neglect based on the facility’s lack of safeguards for maintaining client #1’s required level of supervision,” the report said.

The report said an interview with facility administration on June 25 verified the facility had failed to protect Huffman and had neglected to ensure her safety with proper supervision.

“While the specific timeline of events that occurred in the bathroom prior to client #1’s death are unknown, inadequate supervision contributed to the client’s death on 6/12/21,” the report said.

The News Herald requested information from NCDHHS, which oversees JIRDC, on staff on duty in Ash Cottage the day Huffman died. The personnel information that is available to the public includes position, salary and any disciplinary action including suspensions or demotions. On June 18, Charles Epstein, legal communications specialist for the office of communications for NCDHHS, responded to the request.

As of that date, none of the staff had been suspended, demoted or terminated due to Huffman’s death.

In July, The News Herald asked Epstein for an updated employee list. Epstein responded on July 19 and none of the employees who were working in Ash Cottage on the afternoon of June 12 had been suspended, demoted or terminated.

In a July 7 email to The News Herald, Connor said disciplinary decisions are made in accordance with division policy, which emphasizes holding individuals accountable in a workplace environment with a Just Culture. Any incident involving patient rights or safety is reported and investigated under policies established.

The North Carolina Division of Health Service Regulation report said the facility administrator revealed corrective measures by the facility since Huffman’s death including:

Implementing a change in the process of client supervision transfers among staff to include a physical lanyard that stays with the responsible staff person to note their client’s increased supervision needs.

Administration is currently exploring ways to increase the reliability of supervision monitoring across the facility campus staff and reviewing supervision protocols from a systems approach to assess further improvements to implementing supervision of clients.

Check out the highest bonds issued in Burke County from July 25-31.

A man already facing charges after a homeless man's dog was shot and killed in May landed three new charges last weekend when he punched and threatened a police officer.

Seventeen people have died in Burke County from COVID-19 since the beginning of the month, health officials said.

Holding a knife to his throat and a hatchet in his hand, a man surrounded by police officers threatened to end his life Wednesday.

COVID cases and quarantines continue to develop in schools

Students and staff continue to quarantine and test positive for COVID-19 as the school year advances.

18 COVID-19 patients in ICU in Burke; highest for hospital during pandemic

Burke County added another 153 COVID-19 cases in a 24-hour period by Friday, and the largest number of cases are in the younger populations.

City reopens streatery with a twist

The King Street Eatery, at the corner of King and West Union streets, will reopen Wednesday with three food trucks on the table for diners.

Tammy Huffman, right, has a visit with her father, James Carl Huffman, at J. Iverson Riddle Developmental Center. He visited her on the morning of June 12. She died after being found submerged in a bathtub that evening.

Tammy Fay Huffman liked working and being outside, according to family. In this photo she is seen working alongside her father, James Carl Huffman. 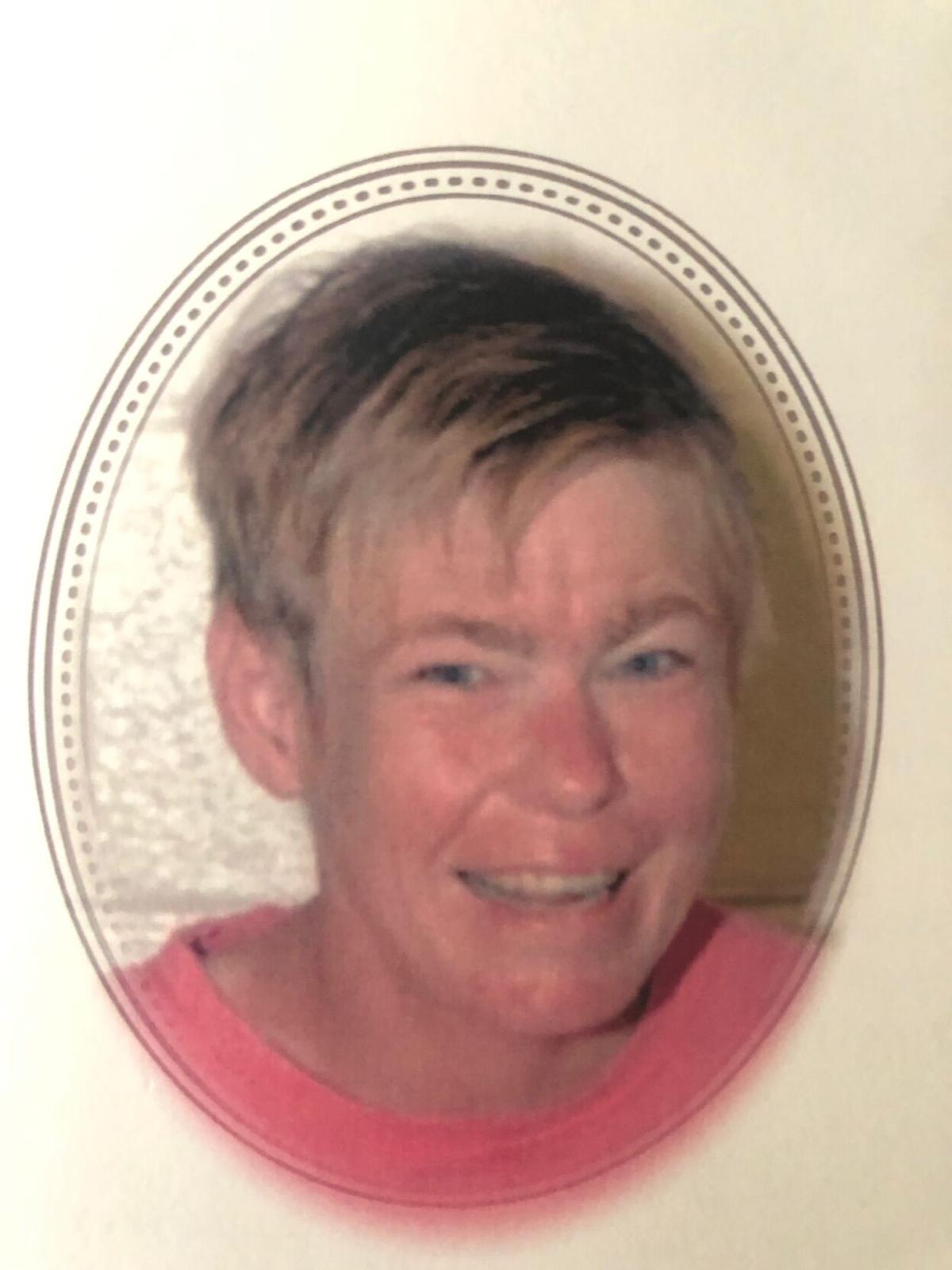