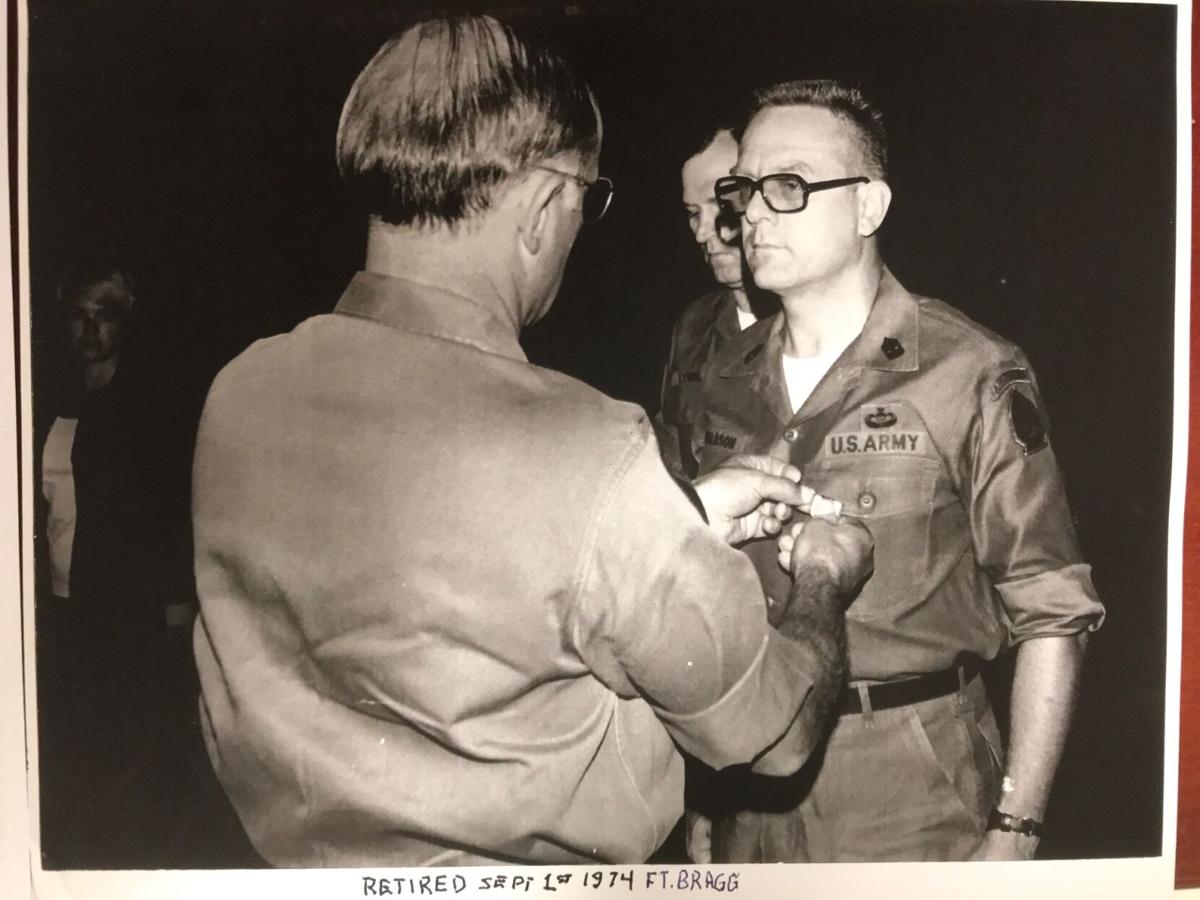 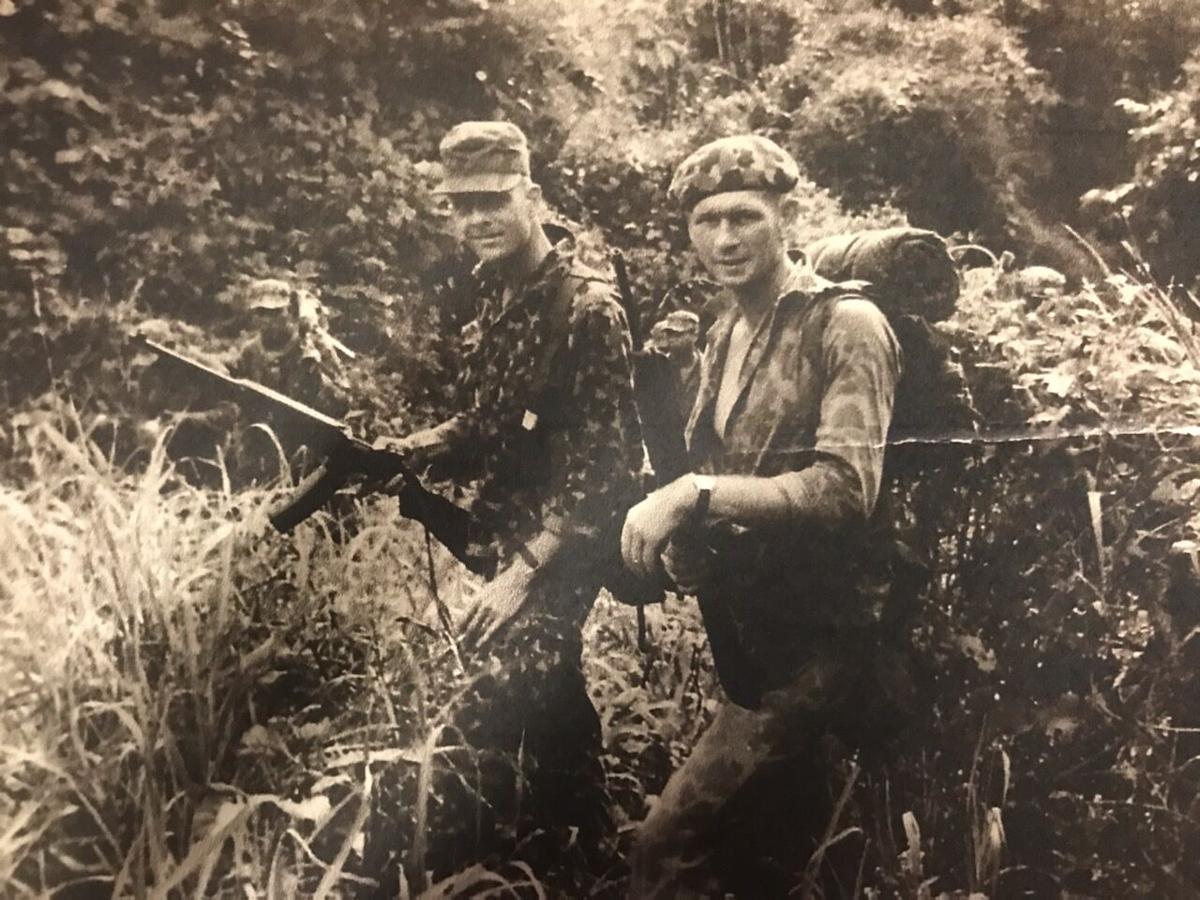 SSG Donaldson, left, and SFC Engelbrecht on a command pass-through during operation AN LAC G in Boun Mi Ga, Vietnam on March 17, 1963.

After spending nearly 30 years in the military, 93-year-old Bob Donaldson of Morganton has seen a lot of places, and could spend days talking about all of the experiences he had during his time served.

“I’ve had so many good (memories) that it’s hard to find a bad one,” Donaldson said.

Donaldson was drafted into the Army in January 1945 and retired in September 1974 as a Sergeant Major. From 1963 until his retirement, he served as a Green Beret in the US. Army Special Forces.

How he came to be a Green Beret involved a case of being in the right place at the right time, he said.

“I was in the First Infantry Division, and there was one radio operator who was in Okinawa,” he said. “There were 20 of us picked, but for some reason the orders were cancelled, and I didn’t get the cancellation.

“When I got there, I held too high a rank for the position they wanted to put me in,” he said. “So they were looking for me a place where they could use me. The captain told me the Special Forces group was looking for men. So I went out there for an interview and they said they would take me in.”

According to Donaldson, the Green Berets didn’t waste any time in making sure he was qualified for the position.

“They told me, 'You know you’re going to have to become Airborne qualified?'” he said. “I said, 'Yeah, alright. How soon?' And they said it wouldn’t be two or three weeks yet, and this was on a Friday, they told me to get my bag and baggage and move in Saturday, and Monday morning I was due to school.”

Donaldson said during training, a unit came in from Hawaii to teach a United State Army Jumpmaster class to the airborne unit, which he also joined.

As a Green Beret, he served two tours in Vietnam. His first tour started in 1963 in a mountain village called Boun Mi Ga, which he said “was way out in the sticks.” His second tour was from November 1969 to November 1970.

Donaldson spent most of his childhood in Erie, Pa. He was forced to drop out of high school after being drafted.

Among the awards and medals he received are the Bronze Star, the Meritorious Service Medal, Commendation Medal and the Good Conduct Medal.

When asked about some of his favorite memories of his time served, Donaldson said the five years he spent in Greece were among the best of his career.

Donaldson went to work as a correctional officer for the prison system in North Carolina. He retired from McCain Correctional Hospital in Hoke County.

“My wife was a special education teacher,” he said. “They had a job for a teacher out there, so I took her out there to see if she could get a job. When we got there, the job was already taken, but they looked at me and said, “But we can take you.” So I accepted it.

“As it turned out, when I got to working there I found about four of my buddies that I was in the service with working there,” he said.

“They had a whole bunch of prisoners in wheelchairs,” Donaldson said. “At chow call, you had to get out of the way because they’d breeze down the hallway to get some (food at) chow hall.”

When asked whether he still keeps in touch with his service members, Donaldson said he only knows of one who is still alive, though he still communicates with him.

“He turned out to be the best man in my marriage,” Donaldson said. “He’s living in Kentucky someplace now. I talk to him over the internet but that’s about all the contact we have.”

“I had made myself a promise when I was a young soldier that I was going to become the highest enlisted rank I could make,” he said. “And I did (as a Sergeant Major). When they presented me with my Sergeant Major stripes, I think that was my proudest moment.”

He also recalled his most difficult moment during his service.

“I guess it was my first tour in Vietnam in 1963,” he said. “Most of the combat was with guerrilla-type operations. Living in the jungle, I lost 60-some pounds, I weighed 153. That was due to sickness and bad food.”

Still, even when talking about his most difficult moment, Donaldson finds a way to make light of the situation and turn to happier memories.

“We had money to go back into Saigon and buy food,” he said. “We would have to put it on the aircraft and have it airdropped at our camp. Well, it was my turn to do that, so I went in and bought all the food and took it out to the air base, loaded it on the pallets and fixed it with parachutes. Then, I got on a plane and went back to camp. They said they would drop the food off within the next few days.

“Well, the next few days we get a call saying our food was on the way,” he said. “When they dropped it, it was four poncho-type parachutes – not regular parachutes – and on the end of those four parachutes was two cases of peanut butter. The Air Force had stolen our food and sent us peanut butter.”

Donaldson said he and his camp were lucky that their neighbors would hunt goa, a type of antelope, and bring them back to camp for the Green Berets to eat.

“So we had meat, peanut butter and biscuits,” he said. “That’s what we ate.”

Still, too much of a good thing can sometimes be a bad thing, according to Donaldson.

SSG Donaldson, left, and SFC Engelbrecht on a command pass-through during operation AN LAC G in Boun Mi Ga, Vietnam on March 17, 1963.