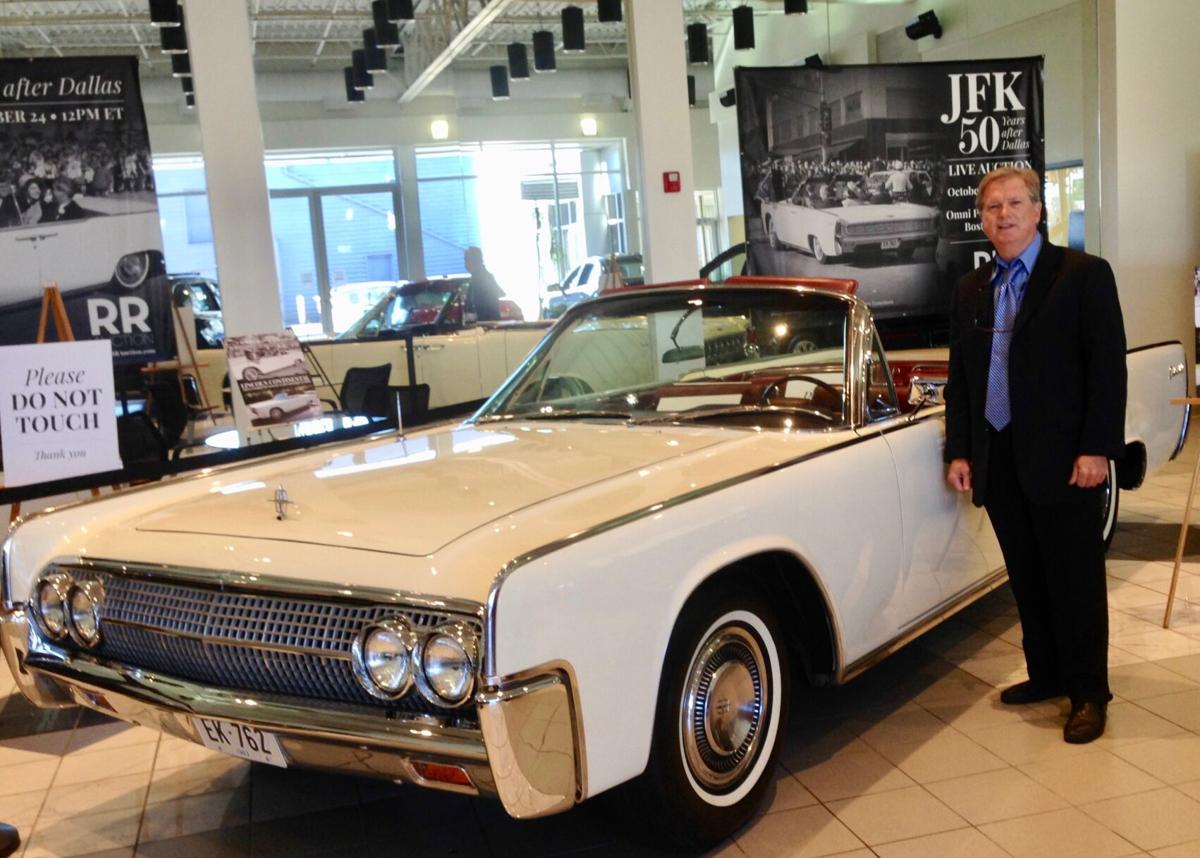 Jim Warlick stands beside the 1963 Lincoln convertible, the second to last vehicle John F. Kennedy ever rode in. The vehicle was one of the items in Warlick's Oct. 14 virtual auction called "The American Presidential Experience." 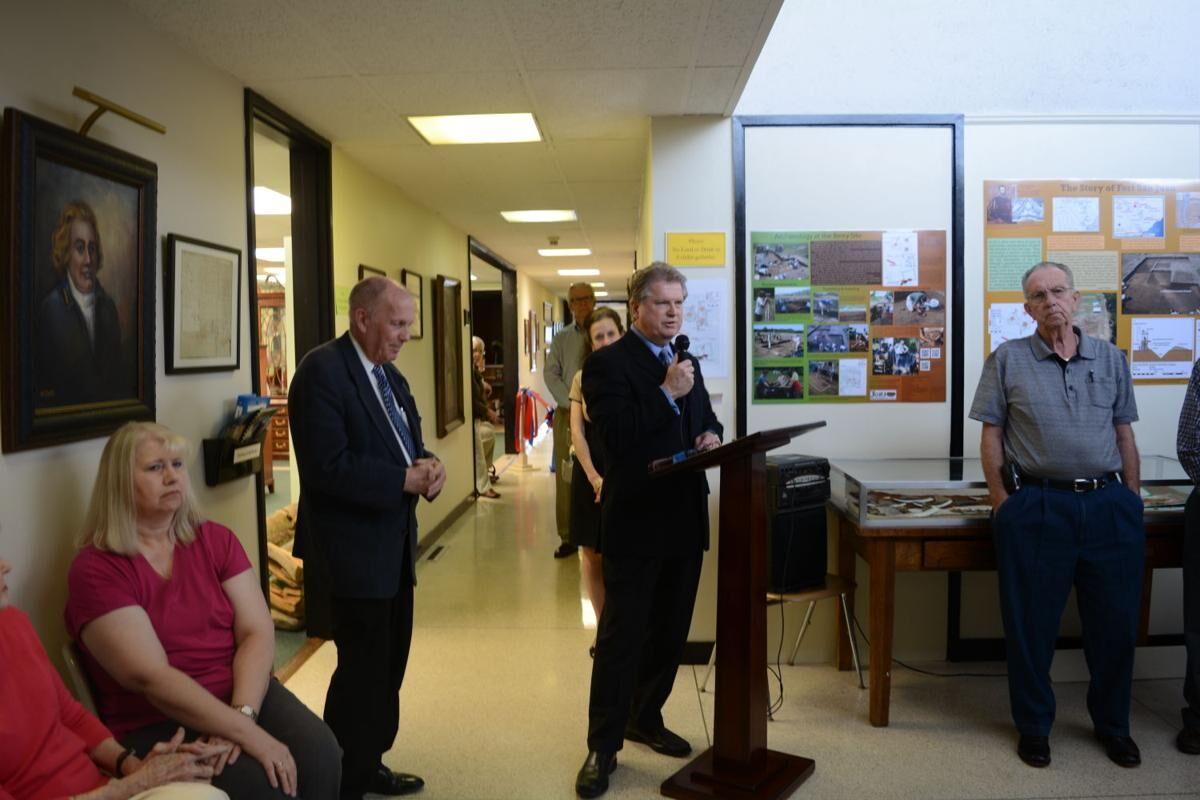 Jim Warlick addresses the crowd at the Burke County Museum during the premiere of the "Burke County Courthouse to the White House" exhibition in March 2016. 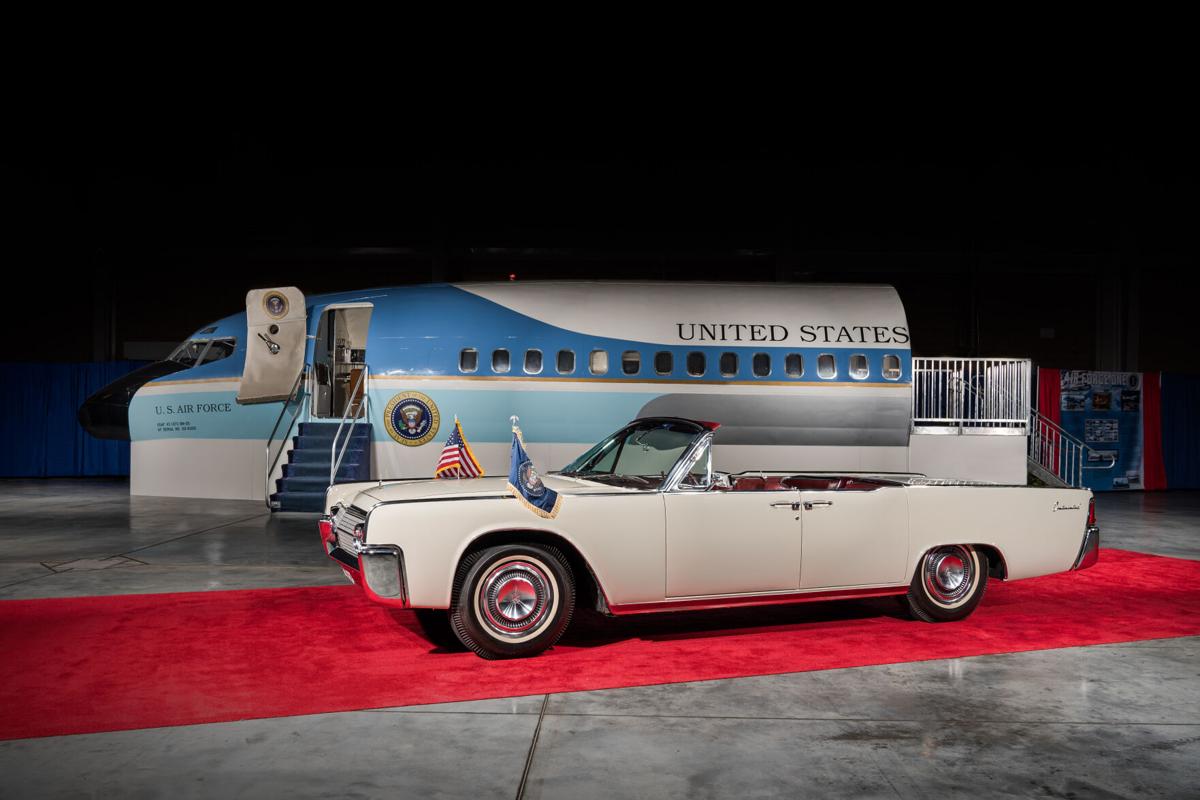 Alongside the 1963 Lincoln is the fuselage of a 707 Boeing airplane. The fuselage was retrofitted as a full-scale replica of SAM 26000 John F. Kennedy's Air Force One.

WEAVERVILLE, N.C. — Though he has lived and worked in many places, Jim Warlick always keeps his hometown of Morganton in his heart.

A longtime collector of historical and presidential items, some of Warlick’s collection was put up for sale at a Bonhams virtual auction in New York City last week, called “The American Presidential Experience: The Collection of Jim Warlick.”

Bonhams, founded in 1793, is a privately owned international auction house.

The proceeds from the auction will benefit Warlick’s Worker’s Legacy Foundation, a project started three years ago to honor local millworkers.

In those three years, Warlick has been interviewing people and gathering photographs, sound bites, interviews and even videos to document the millworkers’ stories.

According to Warlick, Worker’s Legacy Foundation is a three-part process that begins with capturing the voices of millworkers in Burke County and eventually presenting a documentary in local schools.

His inspiration for highlighting the work of local millworkers is his mother, Mary, who went to work at a mill at the age of 16.

“My mother worked 33 years at the same sewing machine,” he said. “She got up every morning at 5:30 a.m., got her three kids up for school and fixed us breakfast. She would catch a ride to work and catch a ride back home with the neighbors in the morning – you’d see the “mill cars” picking up people so everyone would have a full car headed into the mills. I don’t remember her missing a day’s work or ever complaining.”

In looking back at the sacrifices his mother made, Warlick said he wanted the millworkers’ stories to be told.

“They don’t understand the pride that they should have from working in the mills,” he said. “When I started interviewing people, this woman, Evelyn Newton, who has since passed away, said, 'Mr. Warlick, I don’t have a story to tell.' I said, 'Ms. Newton, I’ll find a story in there.' She talked for two hours. When she left, she was beaming because no one had ever really talked to her about working in the mill in terms of pride.

“She raised a family on that income, as meager as it may have been. She was part of her community. So, when I interview people, they finally get it, that they really built a community from working in the mill. I thought that story had not been told, so the documentary will go into that, to give young people pride who have ancestors and family that worked in the mills.”

The third piece of the Worker’s Legacy Foundation is the scholarship program through Western Piedmont Community College that Warlick set up in his mother’s name. According to Warlick, the program is available to as many as 10 students, with the WLF funding their two-year degrees.

“I went to Washington and picked up a little (John F.) Kennedy bust,” Warlick said. “I think I paid 50 cents for it. I was 12 years old, it was 1965. I started collecting political buttons, and then from buttons it went to making campaign material. Then, eventually, I had retail stores.”

Warlick said he operated six stores at one point, but has since reduced down to one memorabilia store in the nation’s capital, called White House Gifts.

The showcase pieces of the auctions were four items.

The first was the 1963 Lincoln car borrowed by Secret Service on the day before Kennedy’s assassination on Nov. 22, 1963.

“(Secret Service) borrowed it from the local car dealer,” Warlick said. “They had planned a parade in Dallas on Nov. 22, so they went ahead and flew the presidential limousine to Dallas because he was going into Fort Worth early the next morning (on Nov. 22.) So, this car picks up the president and Kennedy got in the car with Gov. John Connally. Then, when he got to the airport, he got on the plane and flew on to Dallas. Within an hour after getting out of this car, he had been assassinated.

“There are a lot of films of him in this car,” Warlick said. “When he gets out of the airport at Fort Worth Carswell Air Force Base, you realize that he will never get out of another car. You don’t know that at the moment, obviously, but when you look back and think, 'Wow. How many times he’s gotten in and out of cars and this is the last time you’ll be able to get out of one.'”

The second item of the showcase was one of JFK’s presidential limousines.

“That was his White House limousine that was part of the motor pool of limousines that they keep at the White House,” Warlick said. “It’s a black reinforced armored car and had a two-way radio.”

Ground vehicles were not the only items up for auction in New York.

Warlick bought a Boeing 707 airplane and retrofitted the fuselage to a full-scale replica of JFK's SAM 26000 Air Force One.

“I bought it and cut it where the wings are, and took the fuselage and restored the interior the same way it was that Kennedy’s body was flown back from Dallas to Washington,” he said.

Warlick said some of the interior parts of the fuselage have been used in movies before, including in Oliver Stone's 1995 film Nixon.

The final item in the collection was an Oval Office, one of the six he has in his entire collection.

“It’s fully furnished and decorated with the Resolute desk, and all the paintings and everything that usually go in it,” he said. “I leased this set out to Alec Baldwin on 'Saturday Night Live' for a skit they did.”

Warlick had plans to set up an exhibition at the Burke County Museum in September, but COVID-19 delayed his plans.

Part of the exhibition is Warlick’s dedication of a monument called “Dignity of Work,” which is to honor three millworkers: Mary Warlick, Claude Moore – who worked in Drexel Furniture Factory – and Drexel resident Annie Ramseur.

When the pandemic begins to subside, work on the exhibition and the monument will begin to pick up again, Warlick said.

One thing is for certain, he will always strive to give back to the community that he grew up in.

“To this day, some of my good friends are kids that I grew up with in Chesterfield,” Warlick said. “My heart’s always in Morganton, growing up there, playing baseball and working in politics.

“I try not to forget where I came from.”

To learn more about Worker’s Legacy Foundation, head to https://youtu.be/V8WbfD2KHEM.

Take a look at some of the top news stories in Burke County from Oct. 18-31, and learn more about each of the stories at the links attached.

Jim Warlick stands beside the 1963 Lincoln convertible, the second to last vehicle John F. Kennedy ever rode in. The vehicle was one of the items in Warlick's Oct. 14 virtual auction called "The American Presidential Experience."

Jim Warlick addresses the crowd at the Burke County Museum during the premiere of the "Burke County Courthouse to the White House" exhibition in March 2016.

Alongside the 1963 Lincoln is the fuselage of a 707 Boeing airplane. The fuselage was retrofitted as a full-scale replica of SAM 26000 John F. Kennedy's Air Force One.